Accessibility links
Obama And Romney Go On A Whirlwind Tour In Election's Final Weekend : The Two-Way It's a nonstop sprint to the finish as President Obama and GOP challenger Mitt Romney speed through campaign stops in at least seven states Saturday, looking for support where each needs it most. 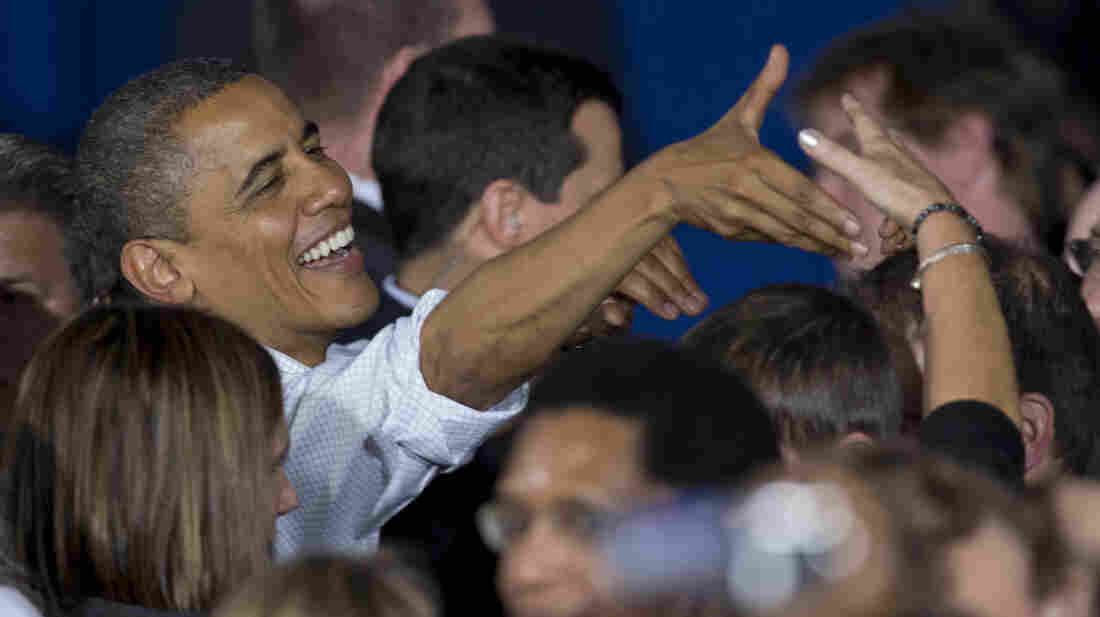 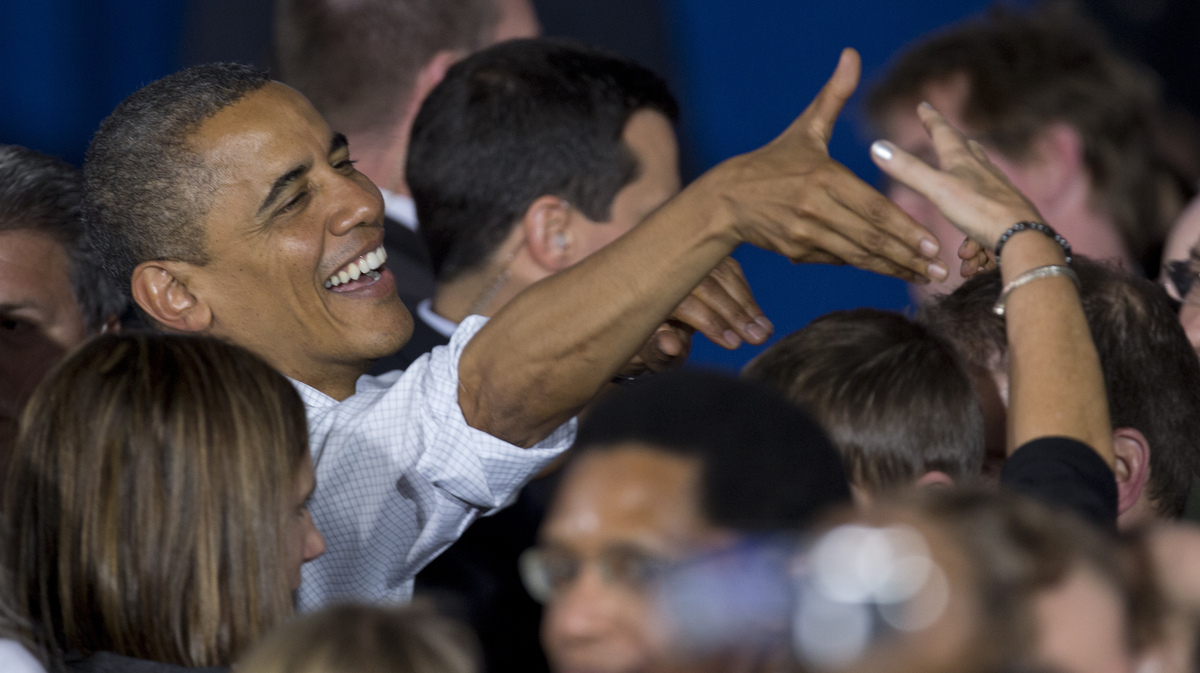 President Obama greets audience members Saturday after speaking at a campaign event at Mentor High School in Mentor, Ohio, before traveling to Milwaukee for another campaign event.

President Obama and challenger Mitt Romney are making the most of every moment this weekend, with only three days left before Americans choose who will lead the government for the next four years.

On his first stop today in the final campaign sprint, President Obama was in the super-battleground state of Ohio. The AP reports that the president reminded voters that Tuesday's election is "not just a choice between two candidates or two parties, it's a choice between two different visions for America."

NPR's Scott Horsley, on the campaign trail with the president, told weekends on All Things Considered host Guy Raz that a large focus was placed on early voting, which is happening all weekend in Ohio and many other states.

"They're trying to bank as many votes as possible even before the polls open on Election Day," Horsley says.

After a day that began in New Hampshire, Mitt Romney continued with campaign stops in Iowa and Colorado. NPR's Ari Shapiro told Raz that Romney is promoting a message of "unity, bipartisanship, working together [and] crossing the aisle," in order to take advantage of a lead among independent voters.

According to the AP, Romney also added Pennsylvania to his campaign tour this weekend, hoping to end a streak of five presidential contests where the Democratic candidate prevailed in the state. 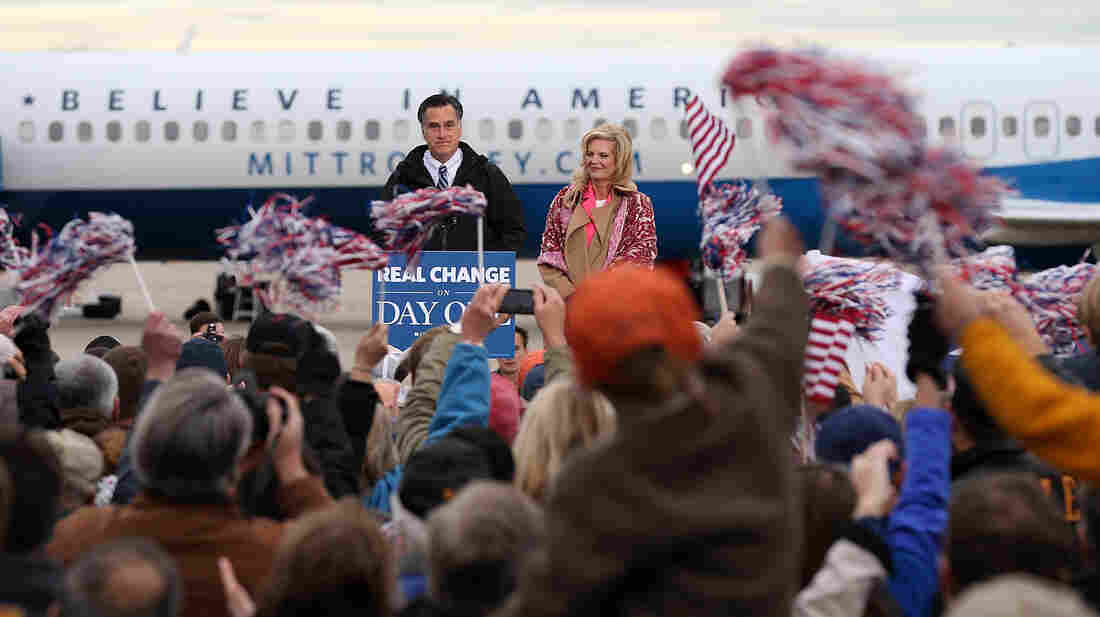 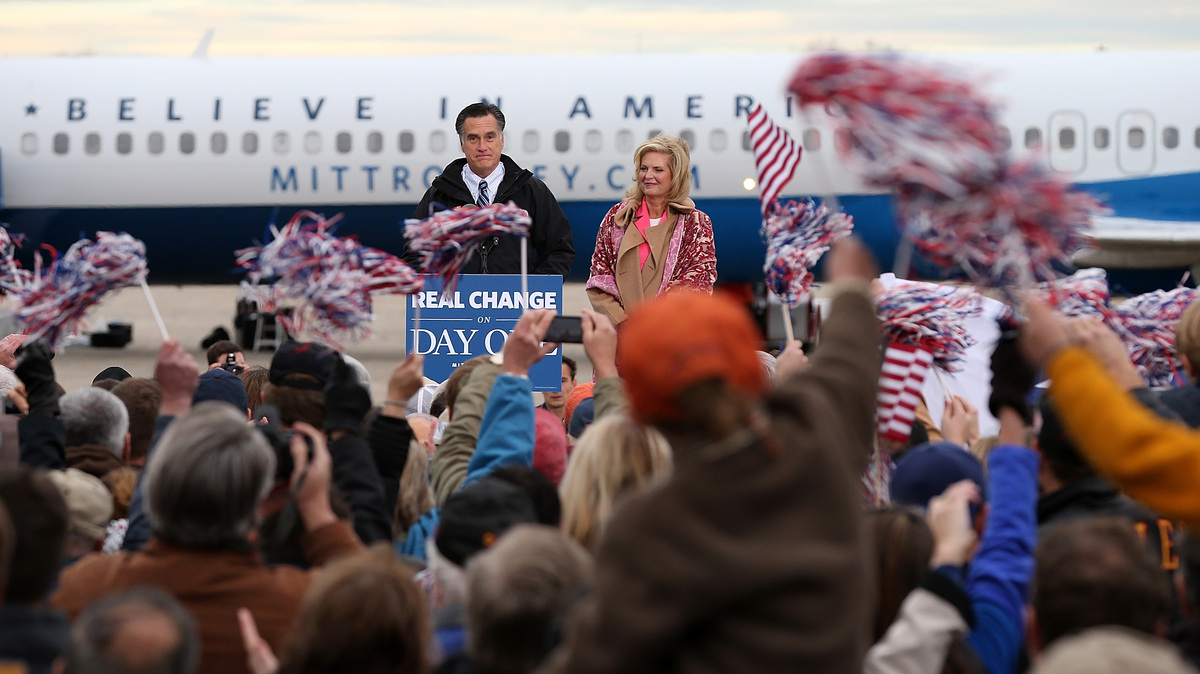 Romney kicked off his day campaigning in New Hampshire and will see crowds in Iowa and Colorado before the day is out. The president started Saturday in Washington, D.C., with a briefing on Superstorm Sandy relief efforts before moving on to campaign events in Ohio, Wisconsin, Iowa and Virginia.

In New Hampshire, the AP reports, Romney questioned his opponent's fighting words from the day before:

"Romney opened a three-state campaign day in New Hampshire by faulting Obama for telling supporters a day earlier that voting would be their 'best revenge.'

" 'Vote for revenge?' the GOP candidate asked, oozing incredulity. 'I'd like to tell him what I'd tell you: Vote for love of country. It's time to lead America to a better place.' "

NPR's Ari Shapiro reports that the night before, Romney held the biggest rally of his campaign at an event in the freezing cold just outside of Cincinnati. More than 20,000 people came out to see the Republican candidate, who was flanked by dozens of Republican governors, senators and other party leaders. Romney told the crowd:

"I'll reach out to both sides of the aisle. I'll bring people together; do big things for the common good. I won't just represent one party; I'll represent one nation."

In an interview with The Washington Post, Republican leading light Karl Rove says that Superstorm Sandy has given President Obama a political boost as he takes on the role of "comforter-in-chief."

The president did nothing to detract from that point of view when he started his Saturday not on the campaign trail but instead with a briefing at the headquarters of the Federal Emergency Management Agency. Obama addressed the recovery efforts in the wake of the storm, saying:

"There's nothing more important than us getting this right and we're going to spend as much time, effort and energy as necessary to make sure that all the people in New York, New Jersey and Connecticut know that the entire country is behind them in this difficult recovery effort. And we are going put not just 100 percent but 120 percent behind making sure that they get the resources that they need to rebuild and recover."

NPR's Scott Horsely reports that out on the campaign trail President Obama is aligning himself with the policies of the Clinton administration, contrasting them with Republican initiatives since, saying:

The president will appear with former President Clinton in Virginia today and New Hampshire on Sunday to try and underscore the link between the two Democratic administrations.

Only about 4 percent of people in Ohio reportedly have yet to make up their minds on whom to vote for in the presidential election. Kabir Bhatia of member station WKSU reports that President Obama's visit to Lake County in Ohio on Saturday is aimed at getting supporters energized and to the polls, not to swing undecideds.

"This is just an effort by the Obama campaign to solidify support and get the base excited in an area of the state that he's gonna need in big numbers."