Accessibility links
Shake A Leg Or Throw A Fist? Which Will It Be On Capitol Hill? : The Two-Way With the election behind them, Congressional leaders are now facing automatic spending cuts and tax hikes that economists fear could plunge the economy back into recession. Can they work together to avert disaster?

Shake A Leg Or Throw A Fist? Which Will It Be On Capitol Hill?

Shake A Leg Or Throw A Fist? Which Will It Be On Capitol Hill? 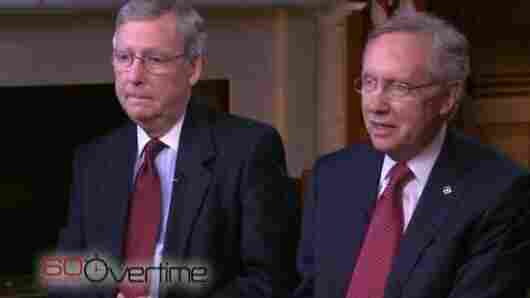 That's the key question for Congress now that another budget crisis is near. Senate Majority Leader Harry Reid, D-Nev, today said he's ready to do a little two-stepping with Republicans to twirl away from the edge of the so-called fiscal cliff.

"It's better to dance than to fight," the former amateur boxer told reporters at a press conference. "Everything doesn't have to be a fight."

But Senate Minority Leader Mitch McConnell, R-Ky., doesn't sound eager to join any conga line to compromise. He issued a terse statement saying that Tuesday's election results showed only that voters are willing to allow President Obama to try to "fix the problems that even he admits he failed to solve during his first four years in office."

Reid and McConnell will get a chance to tango on the floor of the Senate starting Tuesday when Congress convenes for a lame-duck session. Lawmakers will have only a few short weeks before New Year's Eve to address the "fiscal cliff," a $600-billion cluster of automatic tax hikes and spending cuts. The two men haven't looked like they'll be able to work together very well recently, as their "exasperating" interview over the weekend on CBS News' 60 Minutes showed.

The components of the year-end fiscal cliff:

— Needed adjustments to the alternative minimum tax rate so that it doesn't hit middle-class families with big tax bills.

— Start of automatic "sequestration" — spending cuts that hit hard at the Pentagon budget.

Economists say that if the country is allowed to fall over the cliff, the drastic budget changes could shock the economy, and send it back down into recession next year.

Even before 2013 begins, financial markets could panic at the sight of congressional inaction, former House Leader Dick Gephardt, a Democrat, warned at a post-election discussion hosted today by National Journal magazine.

On a day when the Dow Jones industrial stock average already was dropping fast, Gephardt said that if Congress does nothing, "you could have the markets drop by 1,000 or 2,000 points."

Can Congress do something big and dramatic and good for the country's budget by Dec. 31? "I'm very skeptical," Gephardt said. "Lame duck sessions are well named. They are always lame."

Robert Bennett, a former Republican senator from Utah, also spoke at the event. He said that at best, Congress would come up with a "kick-the-can-down-the-road kind of resolution" in coming weeks.

Both men said compromise would be so difficult because all of the choices involve inflicting pain upon constituents. Most economists are urging Congress to raise revenues and cut spending to put the budget on a path towards balance. But Republicans have been deeply committed to not raising taxes, and Democrats are loath to cut government aid, such as extended unemployment benefits and so-called food stamps for low-income families.

Gephardt said all of the options are "toxic" for elected officials who would like to win their next campaigns. "They really don't want to vote for any of this...it's poison," he said.

Update at 3:35 p.m. ET. Boehner Calls On Obama To "Make Good On His 'Balanced Approach,' " Says GOP Will Accept New Revenue "Under The Right Conditions":

House Speaker John Boehner, R-Ohio, just told reporters that House Republicans "stand ready" to work with President Obama and that "we're willing to accept new revenue [additional tax revenue, that is] under the right conditions." Those conditions, he said, include not raising taxes on the middle class but shoring up entitlement programs, "curbing special interests and deductions" and creating a "fairer, simpler, cleaner tax code."

The president, Boehner said, should "make good on his 'balanced approach' " to solving the nation's budget problems.

"Mr. President, this is your moment. We're ready to be led," Boehner added. "We want you to succeed. Let's challenge ourselves to find the common ground among us."