Accessibility links
Why Prince Charles Has A Stake In Transylvania : The Two-Way Romania's tourist board is advertising its family links with the British royal family; Britain's Prince Charles is distantly related to Vlad the Impaler, popularly known as Count Dracula.

Why Prince Charles Has A Stake In Transylvania

Why Prince Charles Has A Stake In Transylvania

Here's a distant relative somebody might want to keep at arm's length - the Romanian government is releasing tourism material highlighting the British royal family's links with the brutal Vlad the Impaler of Transylvania. The Telegraph says Romanian tourism officials hope to attract more British tourists to visit the country.

Prince Charles, the heir to the British throne, dropped this nugget last year on an interviewer: "Transylvania is in my blood. The genealogy shows that I'm descended from Vlad the Impaler, you see. So I do have a bit of a stake in the country."

Vlad is the bloodthirsty Transylvanian tyrant of the 15th century who impaled his victims on wooden stakes and allegedly dipped his bread in their blood. His evil acts inspired Bram Stoker to create his fictional character, Count Dracula. 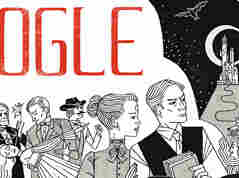 Charles is fond of Romania - he owns property in a rural region, reports the Telegraph, and helps fund a charity there that supports his long time efforts toward organic farming. The paper also lists the descendants of the bloodthirsty Vlad down to Charles's grandfather, George VI and mother, Elizabeth II.

And, as Romania remembers its historical tyrant, Google is remembering the Gothic author who popularized him: today's Doodle honors the 165th birthday of Bram Stoker.