Accessibility links
Second General Getting Snared In Petraeus Scandal Is 'Mind-Boggling' : The Two-Way The stunning resignation of CIA Director David Petraeus, a retired 4-star general, has been followed by an investigation into potentially inappropriate communications between Gen. John Allen and a woman in Tampa.

Second General Getting Snared In Petraeus Scandal Is 'Mind-Boggling'

Second General Getting Snared In Petraeus Scandal Is 'Mind-Boggling' 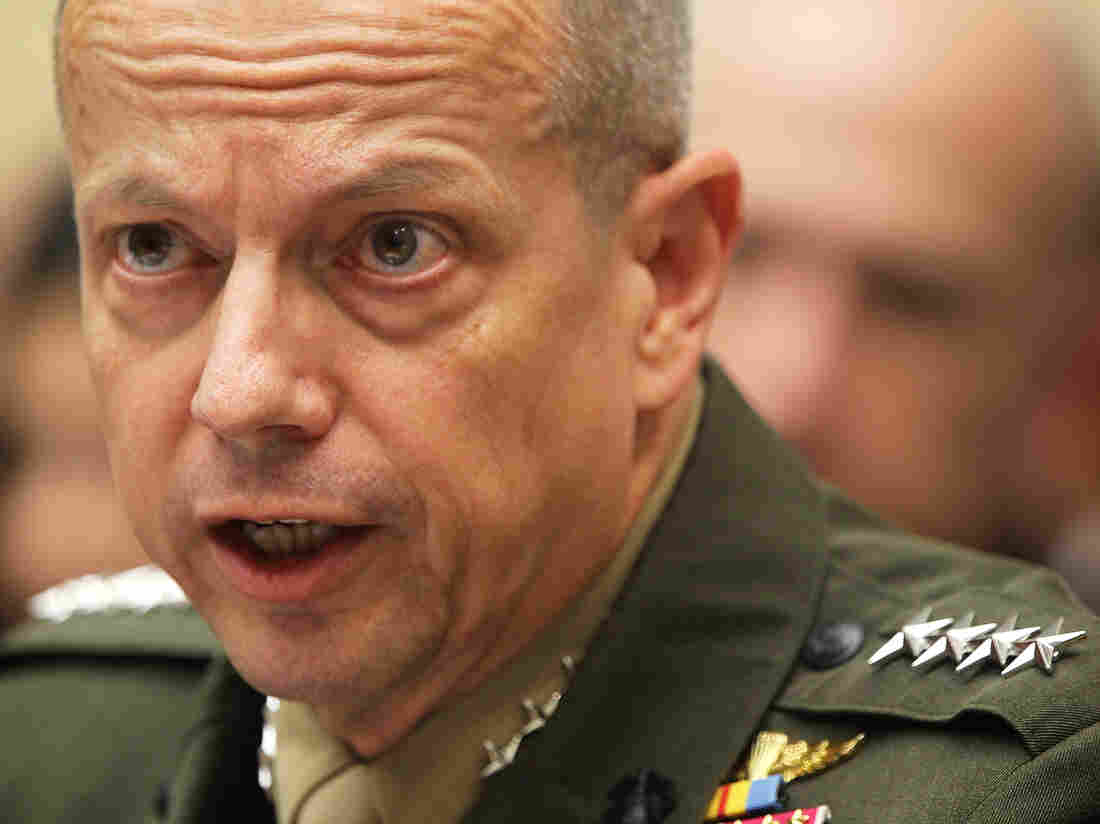 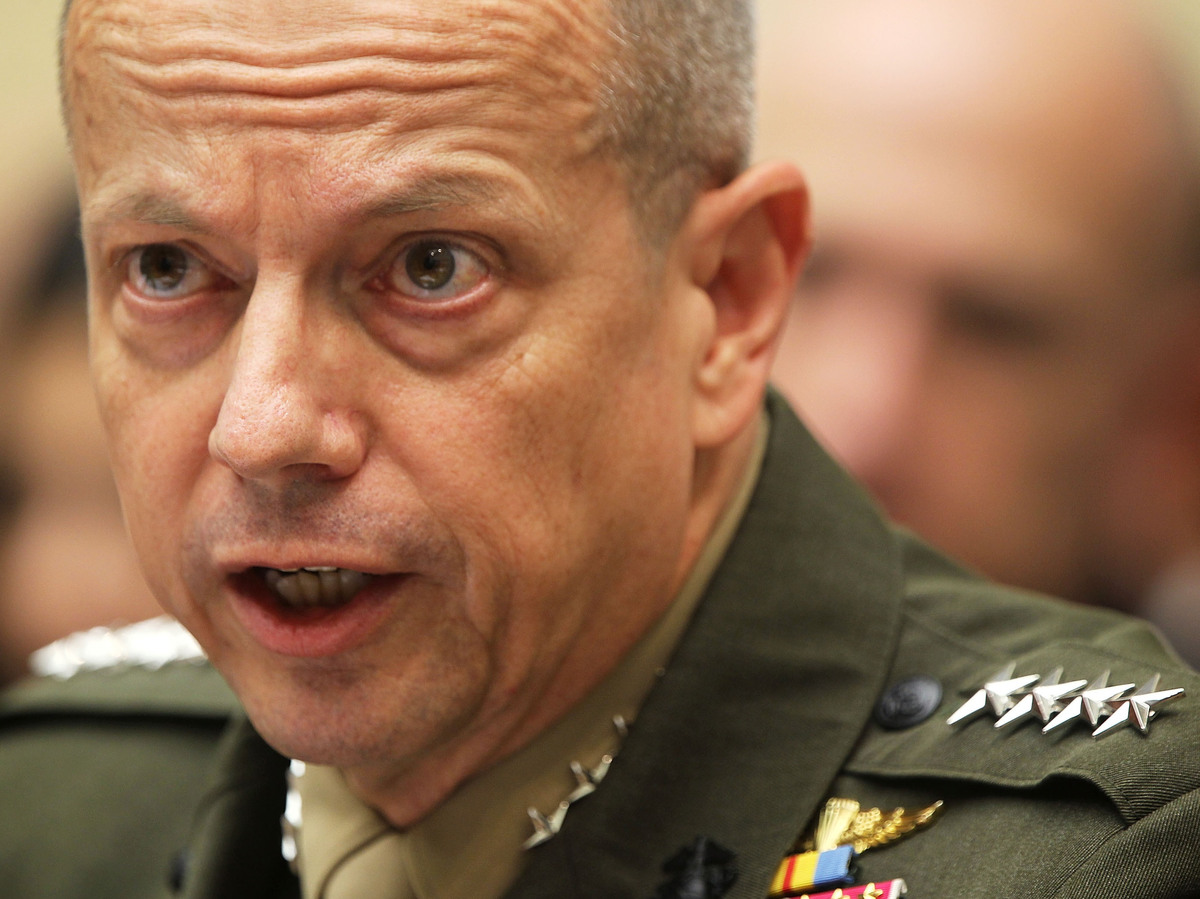 Update at 11:30 a.m. ET: The Associated Press just moved a "bulletin" saying that according to a "senior defense official" the emails between Gen. John Allen and Jill Kelley were "flirtatious."

"I think I'm more surprised by this than almost anything I've seen in my career," NPR Pentagon correspondent Tom Bowman said earlier on Morning Edition as he talked about the scandal surrounding former CIA Director David Petraeus. It's a scandal in which the top U.S. commander in Afghanistan is now caught up.

Marine Gen. John Allen, according to reports that broke overnight, "is under investigation for alleged 'inappropriate communications' with a woman who is said to have received threatening emails from Paula Broadwell, the woman with whom Petraeus had an extramarital affair."

Allen and the woman with whom he was in contact — Jill Kelley of Tampa, Fla., — reportedly exchanged 20,000 to 30,000 pages worth of emails and other electronic communications. Their messages were apparently uncovered during the investigation into harassing emails that Kelley received from Paula Broadwell, the woman with whom Petraeus was having an affair. (For help in keeping the characters in this story straight, see our earlier post: "Petraeus Affair Widens: Who's Who & What's What? Here's A Guide.")

To have both Petraeus and Allen — two of of the highest-ranking and most-respected military officers in recent U.S. history — at the center of such a story is "mind-boggling," Bowman told Morning Edition host Renee Montagne. Before this, he added, Petraeus and Allen were widely thought to be "cautious, careful, disciplined" men.

Just what was said in the messages exchanged by Allen and Kelley is not known, and the general has reportedly told officials there was nothing inappropriate in them. The Washington Post reports that a "senior U.S. official, who is close to Allen, strongly denied that the general and Kelley had an affair or engaged in inappropriate communication."

Still, something in the exchanges triggered action by top Pentagon officials. As The Associated Press writes, early today:

"Defense Secretary Leon Panetta said in a written statement issued to reporters aboard his aircraft, en route from Honolulu to Perth, Australia, that the FBI referred the [Allen] matter to the Pentagon on Sunday. Panetta said that he ordered a Pentagon investigation of Allen on Monday.

"A senior defense official traveling with Panetta said Allen's communications were with Jill Kelley, who has been described as an unpaid social liaison at MacDill Air Force Base, Fla., which is headquarters to the U.S. Central Command. She is not a U.S. government employee.

"Kelley is said to have received threatening emails from Broadwell, who is Petraeus' biographer and who had an extramarital affair with Petraeus that reportedly began after he became CIA director in September 2011."

The New York Times adds that "Mr. Panetta's statement praised General Allen for his leadership in Afghanistan and said that 'he is entitled to due process in this matter.' "

On Morning Edition, Bowman noted that the news about Allen comes "at a very sensitive time." Not only is Allen involved in drawing up plans for the withdrawal of U.S. combat forces from Afghanistan by the end of 2014, he's also laying down plans for how the U.S. will assist that nation in later years. And, he's been nominated to command U.S. and NATO forces in Europe. That nomination has been put on hold while his communications with Kelley are investigated. In the meantime, Allen will remain in command in Afghanistan. But Panetta has urged the Senate to move quickly on the nomination of Allen's successor to that post, Marine Gen. Joseph Dunford.

Politico adds that, "Allen holds one of the highest profile and most sensitive positions in the military, consulting with President Barack Obama, Defense Secretary Leon Panetta and Afghan President Hamid Karzai as the U.S. prepares to transition control of the country's security to Afghans."