Accessibility links
Cleveland's Convicted Idiot Finishes Punishment; Says She's Learned Lesson : The Two-Way Shena Hardin of Cleveland kept driving up on a sidewalk to get around a stopped school bus. After the police nabbed her, a judge ordered her to stand at the scene of the crime for two mornings with a sign saying that only an idiot would do that. 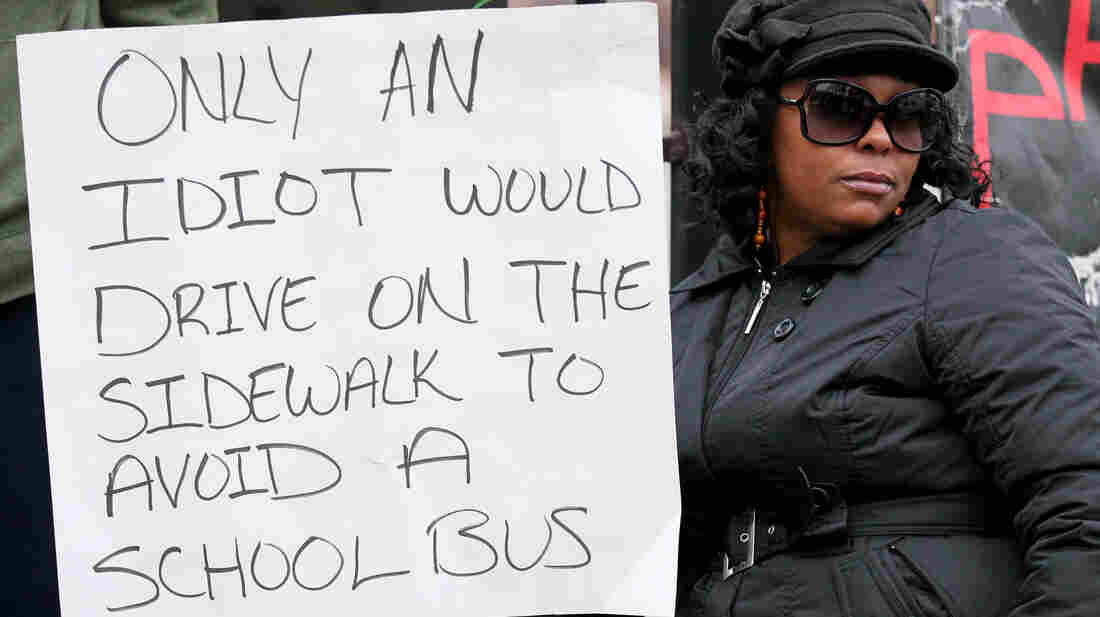 On Wednesday, Shena Hardin Â held her sign of shame higher — as the judge said she should. Marvin Fong /The Plain Dealer /Landov hide caption 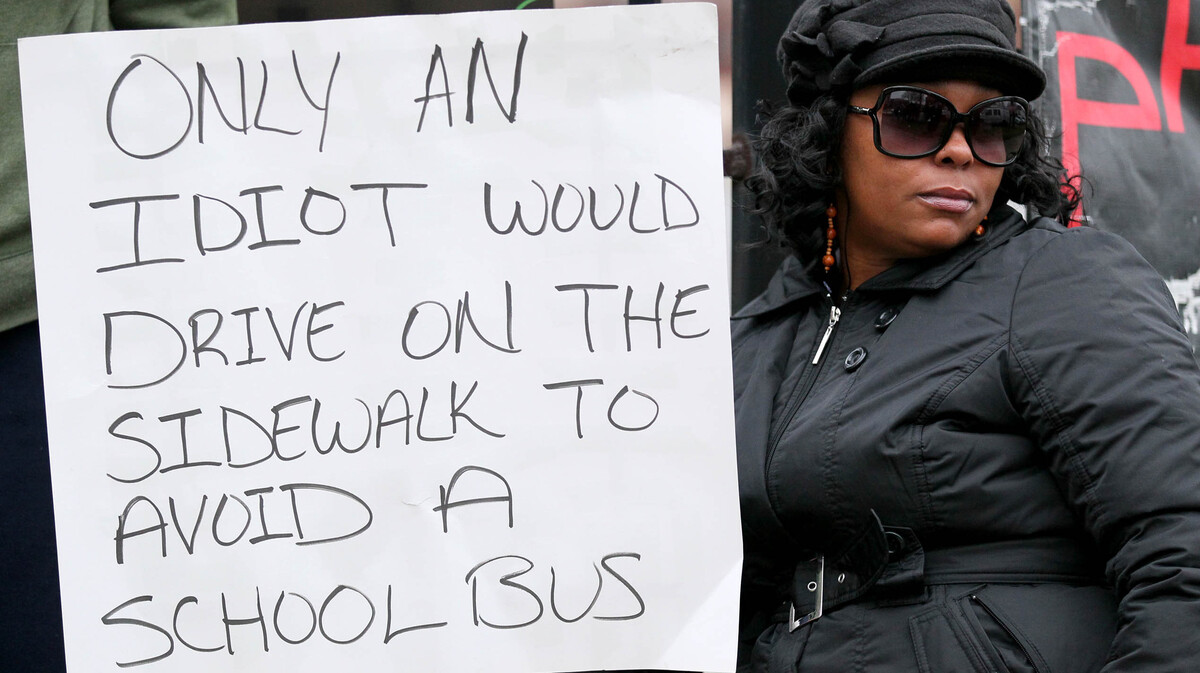 On Wednesday, Shena Hardin Â held her sign of shame higher — as the judge said she should.

Shena Hardin, the Cleveland woman ordered to stand on a street corner with a sign saying she was in idiot for driving on a sidewalk to get past a stopped school bus, finished that two-day punishment this morning and issued a statement saying she's learned a lesson.

" 'I broke traffic laws no different from running a red light or texting while driving. All have the potential of dangerous consequences. It's a learning lesson for me and an example for my daughter that if you make poor or bad choices then you have to suffer the consequences. But this won't break me, and I'll move forward.' "

She also appears to have held the sign a little higher today. As we reported earlier, the judge who added the sign of shame to her punishment wasn't pleased by Hardin's seemingly dismissive behavior on Tuesday.

Update at 8 a.m. ET, Nov. 14: The judge who ordered a Cleveland woman to stand on a street corner holding a sign that tells the world she was an idiot for driving on a sidewalk to pass a stopped school bus is not happy with the guilty party's behavior.

As we reported Tuesday, Shena Hardin smoked a cigarette, texted on her phone and sort of casually stood with the sign yesterday morning. She did not appear to be sorry for her misdeeds. 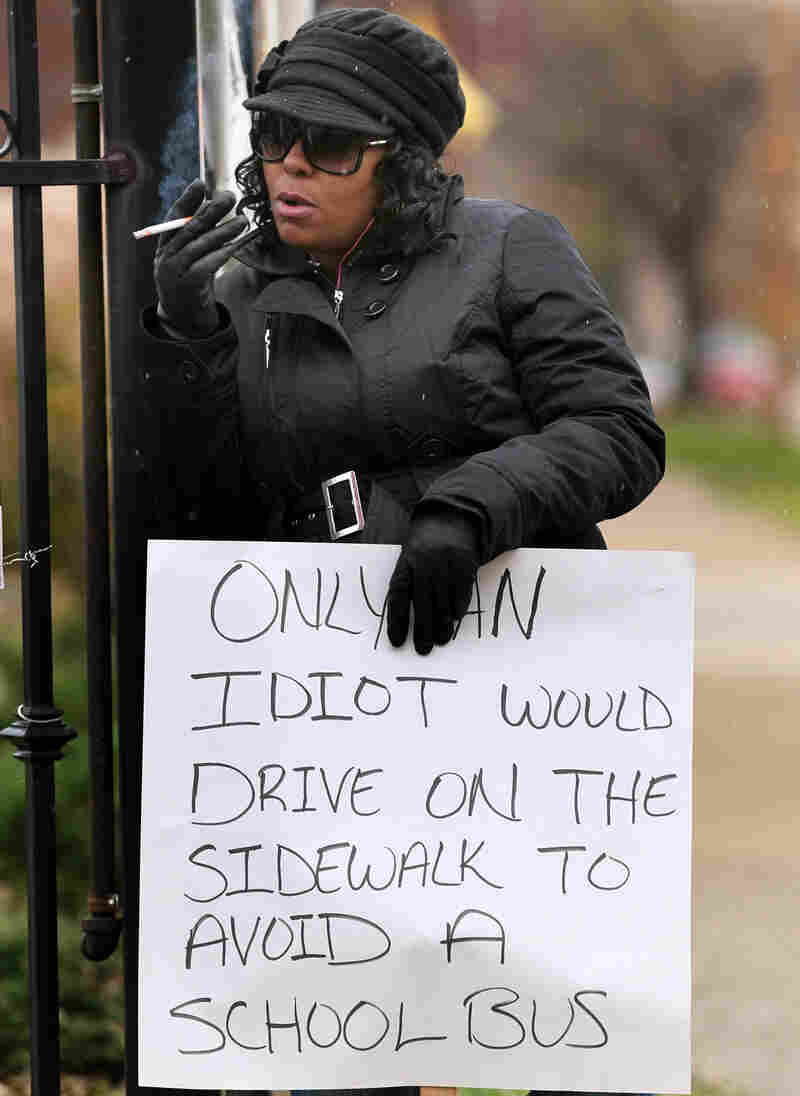 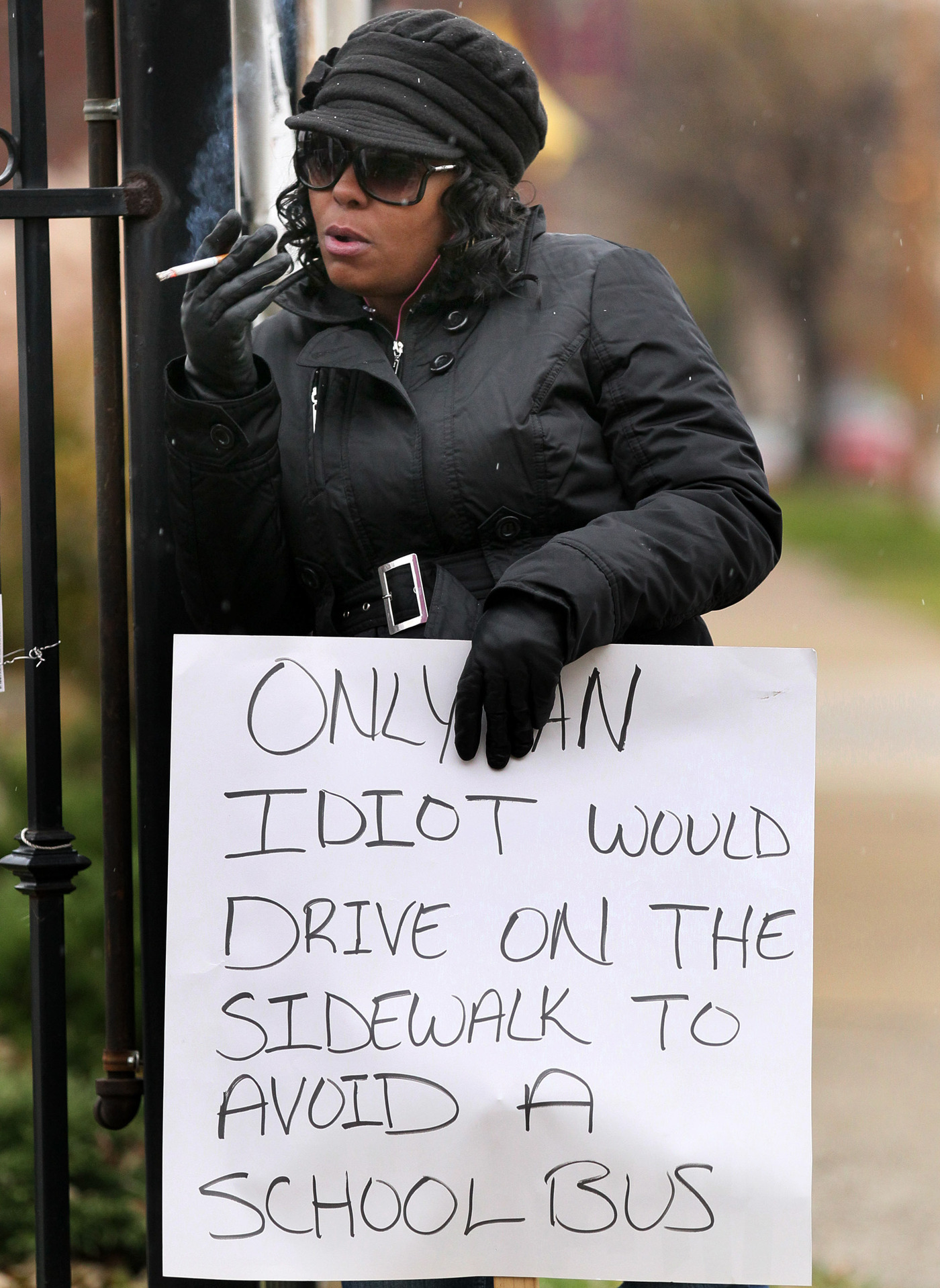 On Tuesday, Shena Hardin's demeanor did not please the court.

Now, WKYC-TV reports, Cleveland Municipal Court Judge Pinkey S. Carr says that "if I wanted someone standing there for an hour texting and smoking cigarettes, I would have had that as part of her sentence. ... But, clearly, she's missing the point. Clearly, it's still a situation where she's defiant." So the judge has told Hardin's attorney that this morning Hardin needs to hold the sign up so that passing drivers can see what it says.

Carr ordered Hardin to stand with the sign for two mornings. Hardin was also hit with a $250 fine and has had her license suspended for 30 days.

While smoking a cigarette, texting on her cellphone and declining to talk to the reporters there to watch, Cleveland's Shena Hardin this morning served Day 1 of her 2-day court-ordered punishment for repeatedly driving up on a sidewalk to pass by a stopped school bus:

She stood at the scene of the crime for an hour while holding a sign that said "only an idiot would drive on the sidewalk to avoid a school bus."

As we reported last week, Hardin "had been seen pulling her dangerous stunt several times this school year. The bus driver, who had tipped off police about what she was doing, used a camera phone to catch Hardin in the act and was recording as she got pulled over by officers."

She was sentenced to stand with her sign for two mornings (Wednesday is to be the next), had license suspended for 30 days and was hit with a $250 fine.