Accessibility links
Israel Aims Airstrikes At Hamas Targets In Gaza : The Two-Way Ahmed Jabari, the commander of Hamas' military wing who has long been on Israel's "most-wanted" list, is dead, according to what Hamas and Israeli officials are telling news outlets. The strikes follow rocket fire from the Hamas-controlled Gaza Strip on Israel. 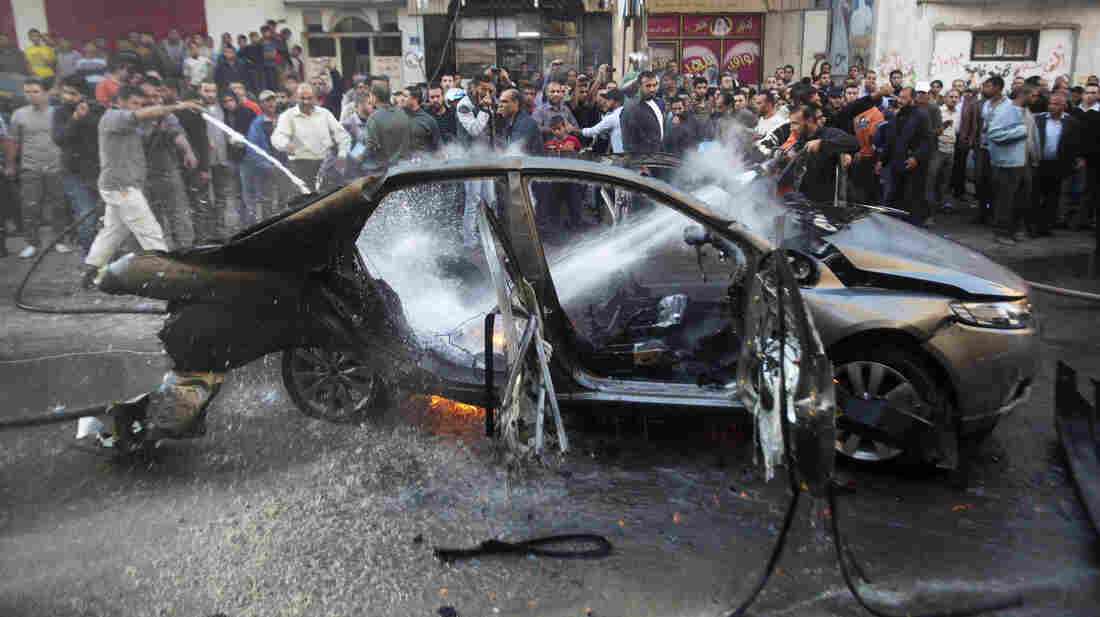 A car hit by one of today's airstrikes in Gaza City. Ali Hassan/Reuters /Landov hide caption 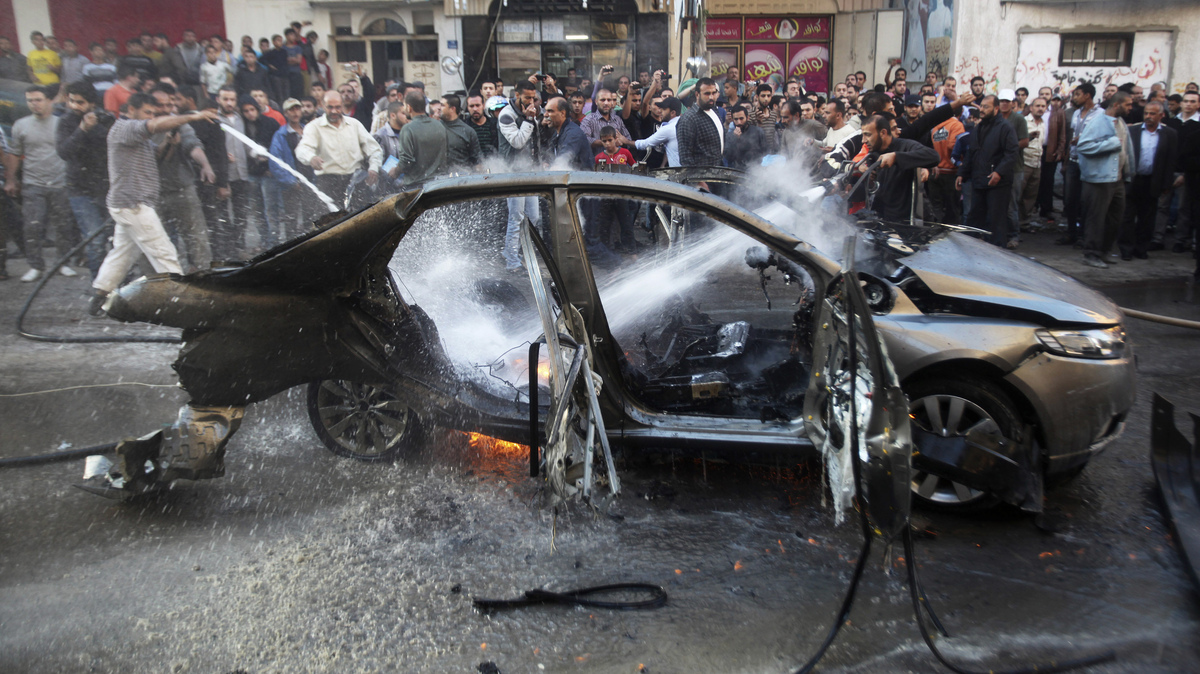 A car hit by one of today's airstrikes in Gaza City.

As we've been reporting, Israel hit targets in the Hamas-controlled Gaza Strip today with multiple airstrikes. The Associated Press says at least 10 people were killed. Among them was Ahmed Jabari, the commander of Hamas' military wing.

The strikes follow recent rocket fire from Gaza into Israel. And Israeli Defense Force officials say more rockets have been fired Israel's way today. The U.N. secretary general is calling on both sides to immediately de-escalate. But that appears unlikely at this point. The IDF, which has been posting statements on Twitter throughout the day, has tweeted that:

"We recommend that no Hamas operatives, whether low level or senior leaders, show their faces above ground in the days ahead."

It has also posted video of what it says is the strike on the vehicle in which Jabari was riding (warning: the content may be disturbing to some).

Scroll down to see our original post and earlier updates.

The Egyptian president has recalled his ambassador to Israel in protest of Israel's airstrikes on the Gaza Strip today. We've added a separate post with the details.

"Operation 'Pillar of Defense' began with a surgical strike on a car carrying the commander of the military wing of Hamas, the Islamist movement which controls Gaza and dominates a score of smaller armed groups.

"Within minutes of the death of Ahmed Al-Jaabari, big explosions were rocking Gaza, as the Israeli air force struck at selected targets just before sundown, blasting plumes of smoke and debris high above the crowded city.

"Panicking civilians ran for cover and the death toll mounted quickly. Seven people including two girls under the age of five were killed, the health ministry said."

Update at 10:45 a.m. ET: Israeli forces struck hard at targets in the Hamas-controlled Gaza Strip today, with multiple airstrikes. Among those killed, according to both Hamas and Israeli officials, was the commander of Hamas' military wing.

Al-Jazeera reports that "Palestinian security sources and medics confirmed a total of four air strikes across Gaza during the late afternoon, two in Gaza City, one of which killed Jabari, one in northern Gaza, and a fourth in the southern city of Khan Yunis."

As Sheera Frenkel reports from Tel Aviv for the NPR Newscast: "Earlier this week, Israeli officials announced they could resume their policy of targeted assassinations in response to ongoing rocket fire by militants in Gaza." 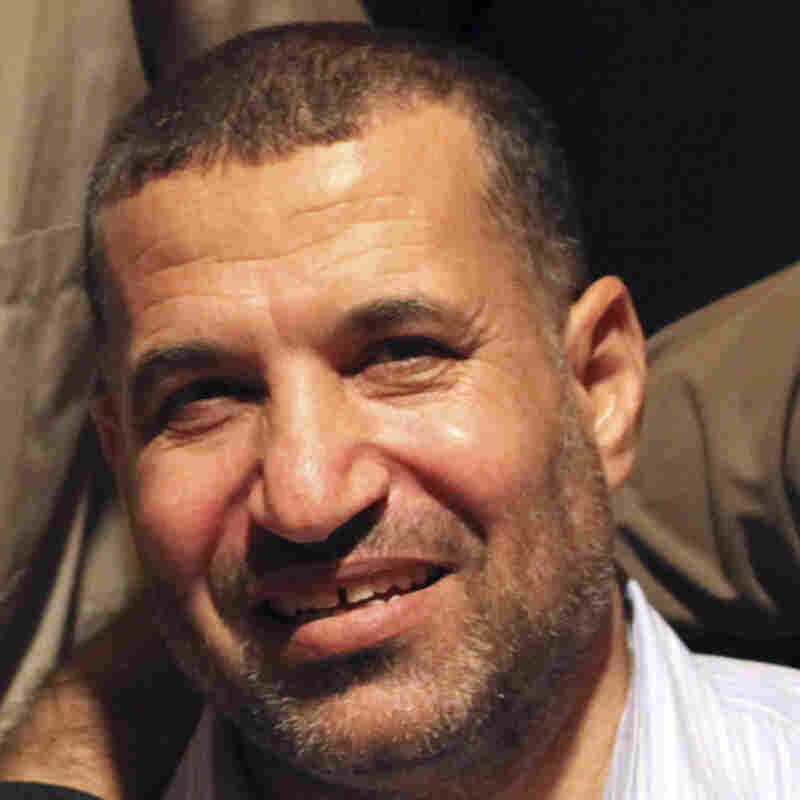 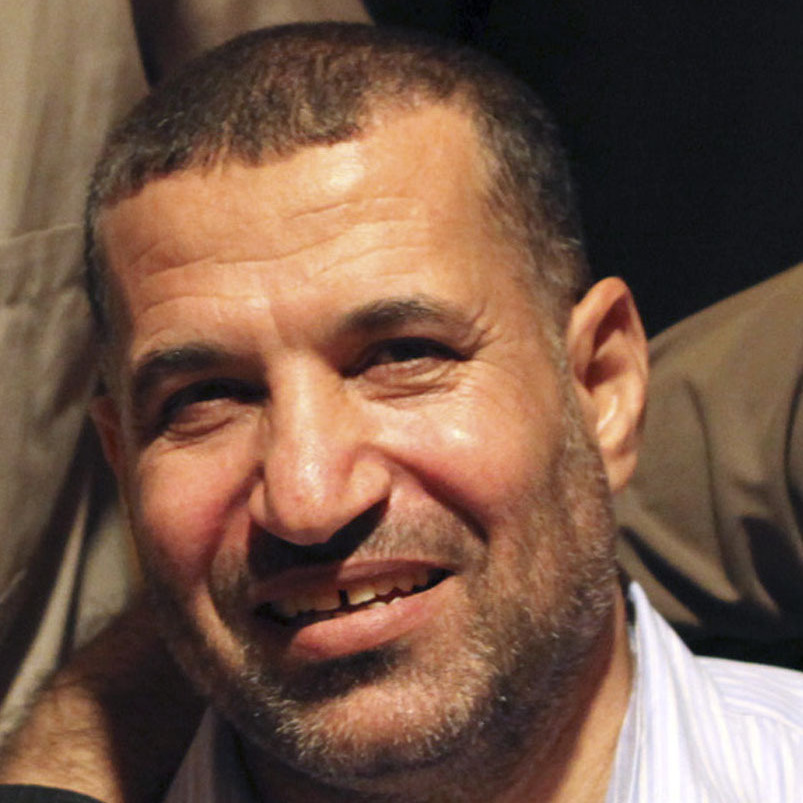 Haaretz is live-blogging here. It writes that an Israeli Defense Forces official says the Israeli military is "ready for ground operation in Gaza, should there be need for an incursion."

Update at 10:20 a.m. ET: Israeli airstrikes continue on targets in the Hamas-controlled Gaza Strip, according to multiple reports. The BBC's Jon Donnison just tweeted, for example, that there's been a "major explosion close to bbc #gaza office."

Ahmed Jabari, the commander of Hamas' military wing who has long been on Israel's "most-wanted" list, was killed today by an Israeli airstrike, according to what Hamas and Israeli officials are telling The Associated Press, Haaretz, The Jerusalem Post and other news outlets.

As the AP notes, "Israeli officials had said in recent days that they were considering assassinating top Hamas officials following a wave of heavy rocket fire from the Hamas-ruled Gaza Strip."

The BBC says "he is the most senior Hamas official to be killed since an Israeli offensive in Gaza four years ago. Witnesses say Jabari was traveling in his vehicle in Gaza City when his car exploded. There are reports his deputy has also been killed."

Reuters adds that "Israel's Shin Bet domestic intelligence service confirmed it had carried out the attack, saying it had killed Jaabri because of his 'decade-long terrorist activity.' "