Accessibility links
Reps. Ron Paul, Barney Frank Ask Obama To Respect Pot Legalization Laws : The Two-Way Colorado and Washington voted to decriminalize recreational use of marijuana, but that is still illegal at the federal level. Paul and Frank are asking the White House to respect the decision of voters. 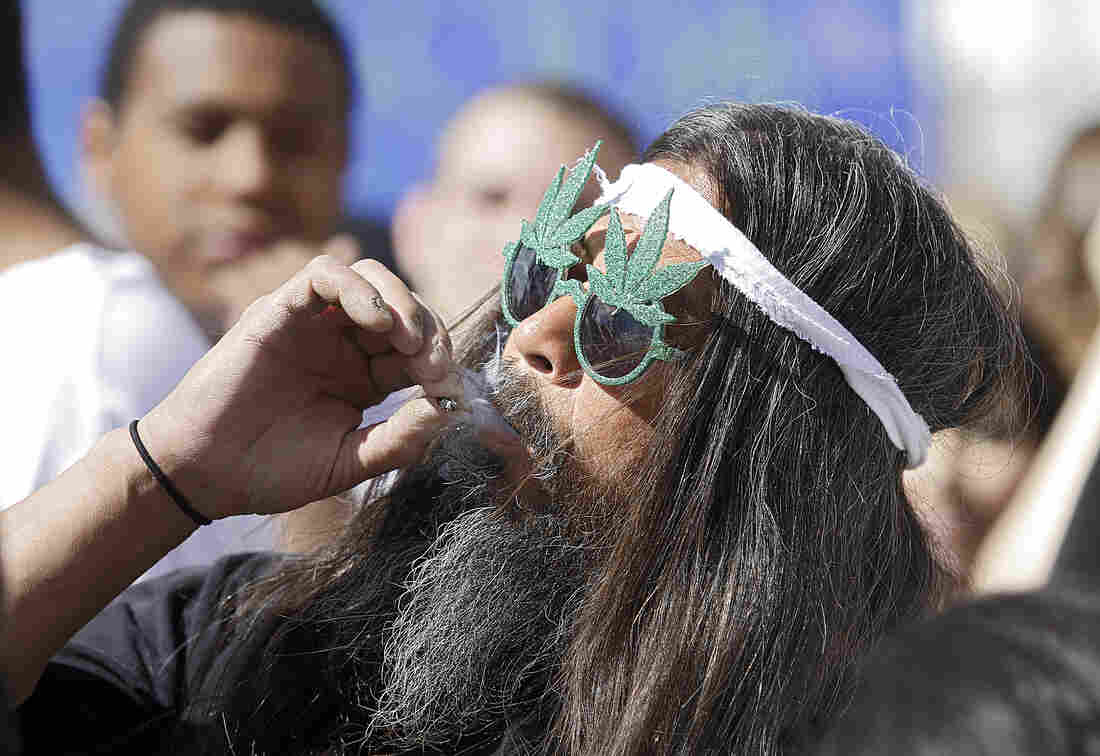 Fast Eddy Aki'a of Hawaii smokes a joint as thousands of supporters of legalized pot, lit up at 4:20 p.m. on April 20 in Denver, Colorado. Marc Piscotty/Getty Images hide caption

Fast Eddy Aki'a of Hawaii smokes a joint as thousands of supporters of legalized pot, lit up at 4:20 p.m. on April 20 in Denver, Colorado.

Reps. Ron Paul (R-Texas) and Barney Frank (D-Mass.) are asking the White House to respect the voters of Colorado and Washington, who decided that recreational marijuana use should be legal.

In a letter sent to President Obama, they wrote:

"We have sponsored legislation at the federal level to remove criminal penalties for the use of marijuana because of our belief in individual freedom. We recognize that this has not yet become national policy, but we believe there are many strong reasons for your administration to allow the states of Colorado and Washington to set the policies they believe appropriate in this regard, without the federal government overriding the choices made by the voters of these states.

"Respect for the rights of states to set policies on those matters that primarily affect their own residents argues for federal noninterference in this case, as does respect for the wishes of the voters – again, on matters that primarily affect those in the relevant electorate. Additionally, we believe that scarce federal resources – law enforcement, prosecutorial, judicial, and penal – should not be expended in opposition to the wishes of the voters of Colorado and Washington, given the responsibility of all federal officials to find ways to withhold unwise or unnecessary expenditures."

The Hill reports that the Obama administration has received criticism for going after medical marijuana dispensaries in California and Colorado, where they are legal.

In an interview with Rolling Stone Obama said he can't simply ignore federal law when it comes to pot.

"What I specifically said was that we were not going to prioritize prosecutions of persons who are using medical marijuana," he told the magazine. "I never made a commitment that somehow we were going to give carte blanche to large-scale producers and operators of marijuana — and the reason is, because it's against federal law. I can't nullify congressional law.

"I can't ask the Justice Department to say, 'Ignore completely a federal law that's on the books. What I can say is, 'Use your prosecutorial discretion and properly prioritize your resources to go after things that are really doing folks damage. As a consequence there haven't been prosecutions of users of marijuana for medical purposes."