Accessibility links
Diplomatic Efforts Mount As Death Toll Rises In Gaza : The Two-Way At least one rocket was fired from Gaza toward Tel Aviv on Sunday, but was thwarted by Israeli missile defense. Israel continued airstrikes overnight, hitting two media buildings that house both domestic and foreign news agencies. 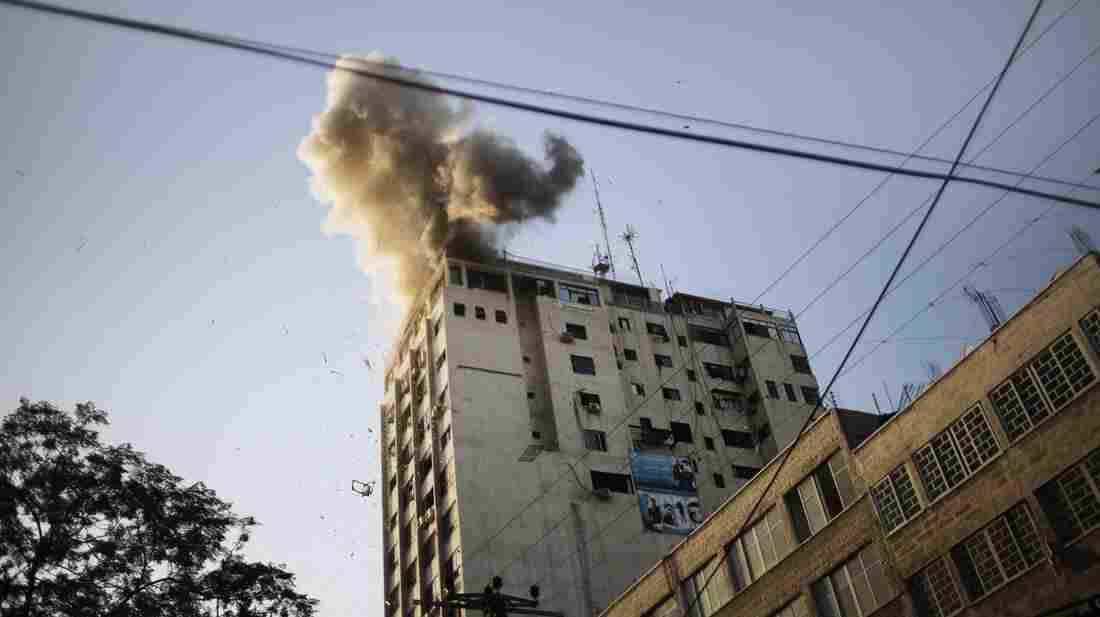 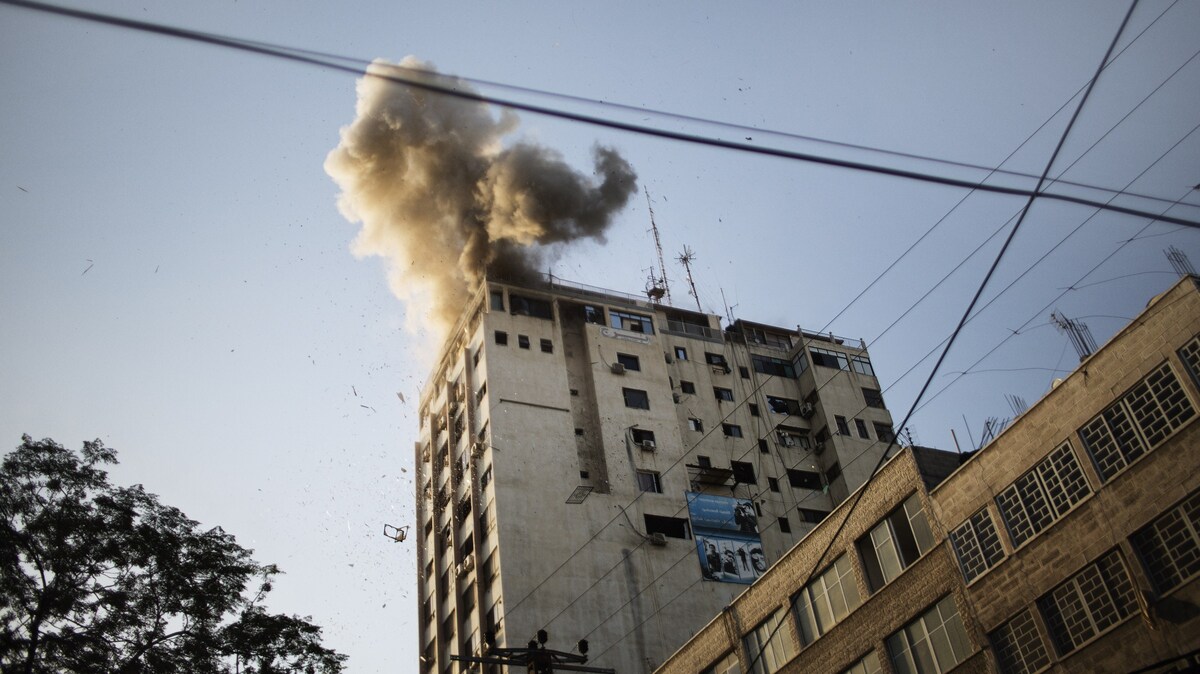 Smoke billows from the local Al-Aqsa TV station in Gaza City Sunday after an Israeli airstrike.

The Israeli bombardment of Gaza continued Sunday — with one missile strike flattening a two-story building in Gaza City, killing at least 11 people, including women and children; another hit a media building and injured six journalists. Israel says its actions have been prompted by a barrage of rockets fired from the Gaza Strip, targeting Israeli cities. Meanwhile, diplomatic negotiations are under way, but Israel is continuing preparations for a ground invasion.

In a statement, State Department spokeswoman Victoria Nuland said Secretary of State Hillary Clinton had made phone calls to resolve the situation. Here's more from the statement:

In all these conversations, the Secretary underscored Israel's right to self defense when rockets are falling on its citizens, and the urgent need for all leaders with influence to use it to seek an immediate de-escalation of tensions.

She and her interlocutors committed to stay in close touch in coming days as they all endeavor to help bring the conflict to an end."

NPR's Leila Fadal reports on weekends on All Things Considered that Egyptian President Mohamed Morsi appears to be taking a much tougher stance than his predecessor on what he's called Israeli aggressions.

"There are some indicators for a possibility for a cease-fire soon, no sure guarantees yet, but what I want like to point out is that war, aggression, and blockade cannot achieve peace or stability for the peoples of the region," he said in a joint statement with Turkish Prime Minister Recep Tayyip Erdogan.

Heard On Weekends On 'All Things Considered'

U.N. Secretary-General Ban Ki Moon, who is expected in the region Monday, issued a statement on the violence:

"I am deeply saddened by the reported deaths of more than ten members of the Dalu family, including women and children, and additional Palestinian civilians killed as a result of the ongoing violence in the Gaza strip. I am also alarmed by the continuing firing of rockets against Israeli towns, which has killed several Israeli civilians. This must stop. I strongly urge the parties to cooperate with all efforts led by Egypt to reach an immediate cease fire. Any further escalation will inevitably increase the suffering of the affected civilian populations and must be avoided.

"I am heading to the region to appeal personally for ending the violence and contribute to ongoing efforts to that end."

Palestinian medics are reporting 10 civilians killed in an airstrike on a house in Gaza, Frenkel adds, the highest death toll in a single incident since Israel launched Operation Pillar of Defense five days ago. The dead include four small children, according to the AP.

Meanwhile, the AP reports, Egyptian security officials say an Israeli official has arrived in Cairo to talk about a possible cease-fire. Egyptian President Mohammed Morsi warns there are no guarantees, Frenkel says.

Gaza's media is the latest target of Israeli airstrikes as diplomatic pressure is urging both sides to lay down their arms.

At least one rocket was fired from Gaza toward Tel Aviv on Sunday, but was thwarted by Israeli missile defense. Israel continued airstrikes overnight as well, hitting two media buildings that house both domestic and foreign news agencies.

Several journalists were injured in the strikes. NPR's Anthony Kuhn told Weekend Edition host Rachel Martin "the Palestinian journalists who were there see themselves as patriots who were contributing to the defense of their country through their reporting."

Journalists were warned to evacuate the buildings hours before of the attack, CNN's Sara Sidner reported from Gaza. On Twitter, the Israel Defense Forces warned, "Advice to reporters in #Gaza, just like any person in Gaza: For your own safety, stay away from #Hamas positions and operatives."

Salama Marouf of the Hamas media office condemned the attack, the The New York Times reports, calling it "an 'immoral massacre against the media' and calling the attack a 'confession' by Israel 'that it has lost the media battle.'"

"Some people run to take cover, but most stand pointing towards the sky, as an interceptor missile from Israel's Iron Dome system strikes the Palestinian rockets in mid-air."

Negotiations by diplomats in the region are under way. Egyptian President Mohammed Morsi said a cease-fire mediated by Egypt, Turkey and Qatar is in the works, Kuhn reports, but there isn't an agreement yet. Hamas also met with Egyptian intelligence yesterday.

"Apparently they outlined conditions under which they would stop fighting, such as Israel ceasing to assassinate their top leaders," Kuhn said.

The French foreign minister is in Israel today and United Nations Secretary General Ban Ki Moon is expected Monday. On Tuesday, a delegation from the Arab League intends to visit Gaza in a show of solidarity.

Politically, Israel has support from European countries, the UN and the U.S., Kuhn says, which have all said the burden of de-escalating the fight is on Hamas.

President Obama reiterated U.S. support for "Israel's right to defend itself," on Sunday.

Amos Harel, defense analyst for the Israeli newspaper Haaretz, told Frenkel it will become clearer over the next couple days whether Israel will expand its operation into a ground invasion. Frenkel reported:

"[Harel] says that Iron Dome is playing a major role in preventing civilian casualties on the Israeli side, and is allowing Israeli politicians wiggle room to negotiate a potential cease-fire agreement with Hamas. He says neither side wants to continue fighting."

"We are exacting a heavy price from Hamas and the terrorist organizations and the Israel Defense Forces are prepared for a significant expansion of the operation."