Accessibility links
Truce Agreement Reached: Israel And Fighters In Gaza To 'Hold Fire' : The Two-Way Talk of a cease-fire had been shattered by an attack in Israel and more airstrikes on targets in Gaza. But in Egypt, which had been trying to broker a truce, a deal was announced. Will it last? 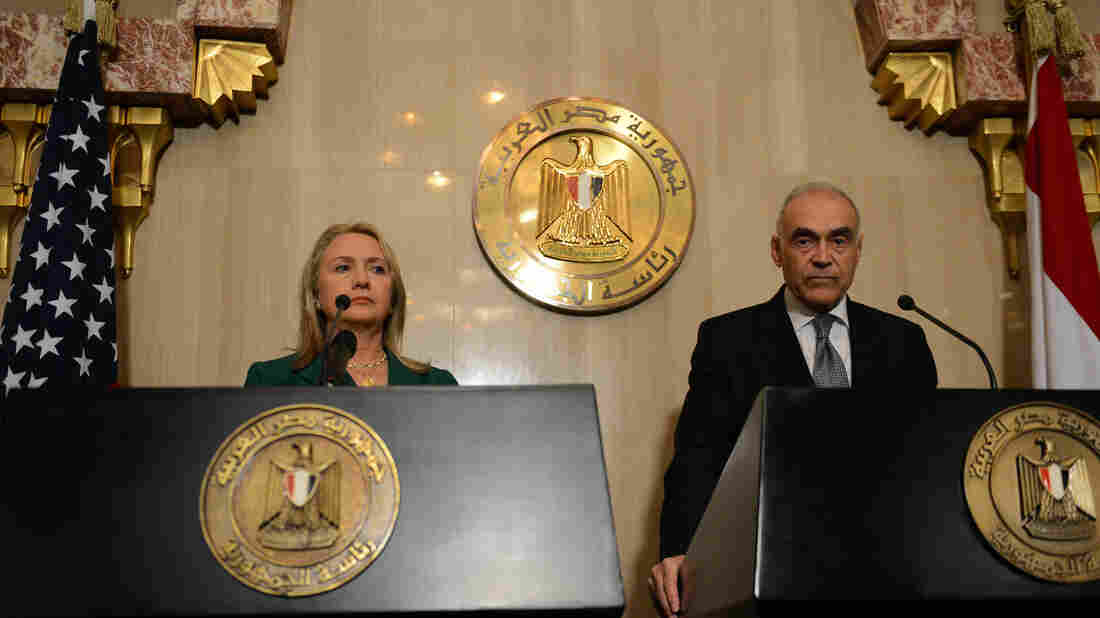 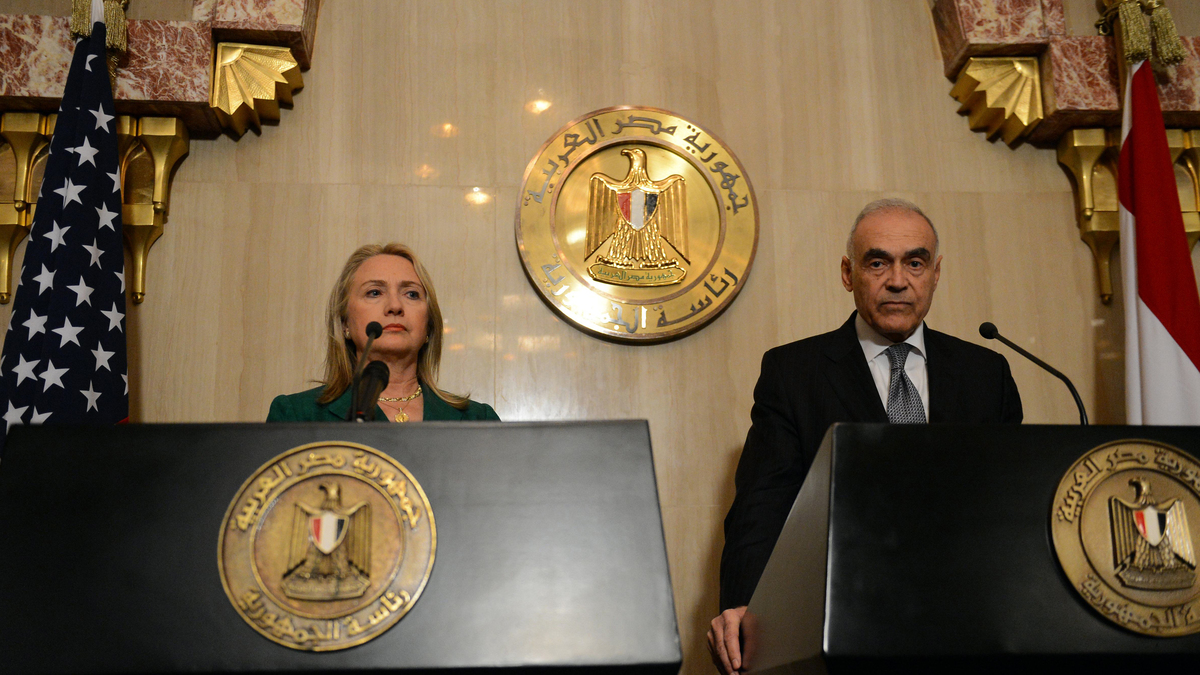 After a week of bloodshed, Israel and fighters in the Hamas-controlled Gaza Strip agreed to "hold fire" beginning at 2 p.m. ET today, Egyptian Foreign Minister Mohamed Kamel Amr announced at a joint news conference this afternoon with Secretary of State Hillary Rodham Clinton.

Egypt had been trying to broker a truce to end the exchange of rockets and air strikes between Israel and militants in Gaza.

We'll post more on the agreement, which was announced at 12:35 p.m. ET., as the story develops.

The cease-fire is holding. But ABC News spoke to a senior White House official who said this is a fragile deal.

"The way we view this is that it's an important step, but our concerns are Egypt can't control all of Hamas and Hamas doesn't control every extremist with a rocket in Gaza," the official told ABC. "So there is a tenuous nature to this."

While rockets and missiles don't seem to be flying, there has been quite a bit of celebratory gunfire in Gaza City, according to correspondents there. The BBC's Paul Danahar has posted audio of it.

News outlets and the many folks who have been tweeting from Gaza and Israel are not posting reports about rockets being fired at Israel or missiles hitting Gaza City.

"That is what a responsible government does," Israeli Prime Minister Benjamin Netanyahu just said, referring to the military action aimed at Hamas.

"I know there are those who expected a more intense military response," he added, as The Guardian writes, "and that may be needed, but at this time the best thing for Israel" a cease-fire.

In Cairo moments ago, senior Hamas official Moussa Abou Marzouq said that he is sure Hamas can control all Palestinian factions within the Gaza Strip and stop the firing of rockets into Israel, NPR's Leila Fadel tells us.

Whether those crossings will indeed be opened, though, remains to be seen. 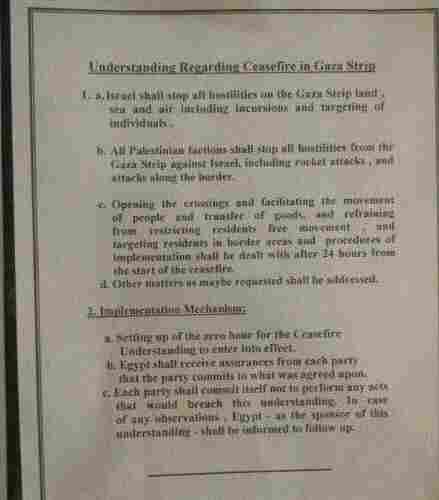 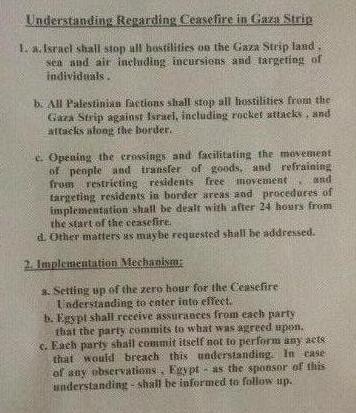 Agence France Presse has posted what it says is the text of the agreement.

As for opening border crossings, that issue "shall be dealt with after 24 hours from the start of the ceasefire."

"The details of the deal are not yet clear, says the BBC's Middle East editor Jeremy Bowen. Israel's demands included an end to hostile fire of any kind from Gaza and international efforts to prevent Hamas from re-arming. For its part, Hamas wanted an end to the blockade on Gaza and targeted killings by Israel."

Israeli Prime Minister Benjamin Netanyahu is due to make a statement at 1:30 p.m. ET. Meanwhile, the White House says President Obama today thanked Egyptian President Mohammed Morsi "for his efforts to achieve a sustainable ceasefire and for his personal leadership in negotiating a ceasefire proposal. President Morsi expressed appreciation for President Obama's efforts in this regard." Earlier, as we reported, the president spoke with Netanyahu.

During a telephone conversation earlier today with Israeli Prime Minster Benjamin Netanyahu, President Obama "said that the United States would use the opportunity offered by a cease-fire to intensify efforts to help Israel address its security needs, especially the issue of the smuggling of weapons and explosives into Gaza," the White House says in a statement just emailed to reporters.

In her comments, the secretary of state said "there is no substitute for a just and lasting peace. ... Now that there is a cease-fire, I am looking forward to working with the foreign minister and others to move this process."

We're posting on the latest news from Israel and the Gaza Strip, and about efforts to bring about a cease-fire or truce. There's been an explosion on a bus today in Tel Aviv and Israel continues to hit targets in and around Gaza City. Meanwhile, efforts to broker a truce or cease-fire continue:

Reuters reports that "Israel and the Islamist militant group Hamas agreed on Wednesday to a Gaza cease-fire deal, said a Palestinian official with knowledge of Egyptian mediation between the two sides."

Correspondent Barack Ravid from the Israeli newspaper Haaretz tweets that "Israel official: SecState Clinton will announce 20:00 in Cairo on cease fire in Gaza." That would be 1 p.m. ET. Al-Jazeera says the announcement will come from Egyptian officials.

As we wrote earlier, "it's important to bear in mind that each day we seem to get reports of truce or cease-fire deals being discussed, only to be followed by reports of rockets being fired from Gaza and Israeli air strikes in response."

Update at noon ET. Israeli Official Says Most Of Those Killed In Gaza "Deserved It":

On WNYC's The Takeaway today, Israeli Deputy Foreign Minister Danny Ayalon said that "if you compare the situation in Gaza, let's say, to the situation in Syria today, where the Assad regime just mercilessly butchers people and children, there is a big difference. I would say that most of the people that were hit in Gaza deserved it, as they were just armed terrorists."

Update at 11 a.m. ET. U.N. Secretary-General Says "Many Details" Need To Be Worked Out Before Any Cease-fire.

Reuters writes from Cairo that:

"U.N. Secretary General Ban Ki-moon said on Wednesday there were 'many details to work out' before a cease-fire could be reached to end the conflict between Israel and Palestinian militants in the Gaza Strip. 'I am particularly concerned about the spiral of violence at the time of intense efforts to reach a ceasefire in Gaza and Israel,' Ban said. 'We all know there are many details to work out. But while that happens civilians continue to die.' "

Also: The number of people wounded by the explosion on a bus in Tel Aviv today is now being reported by the BBC and other news outlets as more than 20.

The BBC adds that Gaza officials say that over the past week, there have been 152 people killed there — 13 of them today. There have been five deaths in Israel.

It's important to bear in mind that each day we seem to get reports of truce or cease-fire deals being discussed, only to be followed by reports of rockets being fired from Gaza and Israeli air strikes in response. So keep that in mind as Reuters' Dan Williams tweets that:

According to Reuters, "Israel's best-selling Yedioth Ahronoth newspaper said an emerging outline of a ceasefire agreement called for Egypt to announce a 72-hour ceasefire followed by further talks on long-term understandings."

"The United States strongly condemns this terrorist attack [the bombing of a bus in Tel Aviv] and our thoughts and prayers are with the victims and the people of Israel," Secretary of State Hillary Rodham Clinton says in a statement released by her staff. "As I arrive in Cairo, I am closely monitoring reports from Tel Aviv, and we will stay in close contact with Prime Minister Netanyahu's team. The United States stands ready to provide any assistance that Israel requires."

The White House released a similar statement, and also said that "these attacks against innocent Israeli civilians are outrageous. The United States will stand with our Israeli allies, and provide whatever assistance is necessary to identify and bring to justice the perpetrators of this attack. The United States reaffirms our unshakeable commitment to Israel's security and our deep friendship and solidarity with the Israeli people."

From Jerusalem, NPR's Philip Reeves reports that the bus attack "happened around the same time Clinton was meeting Palestinian leaders in the West Bank city of Ramallah - before heading to Egypt. ... Many Israelis will view a bomb planted on a bus in the heart of their biggest city as a significant escalation in the conflict."

Tuesday's talk of a possible cease-fire has been replaced with news today of an explosion on a bus in Tel Aviv and more Israeli airstrikes on targets in the Hamas-controlled Gaza Strip.

The bus explosion injured at least 17 people, according to news reports. Israeli officials are saying that a bomb was left on the bus and are calling this a "terrorist attack." The BBC reports that the "Hamas-run Al-Aqsa TV" has issued a statement saying it "welcomes" the news of the bombing. The BBC's Jon Donnison tweets that "Hamas claims responsibility for bus explosion in Tel Aviv broadcatsing statement from mosques in #Gaza."

In the week since Israel began airstrikes on targets in Gaza — in response to rocket fire from forces in the Hamas-controlled territory — more than 130 people have reportedly been killed on the Gaza side and at least five have died in Israel.

Secretary of State Hillary Rodham Clinton and U.N. Secretary-General Ban Ki-moon remain in the region. Egypt has been trying to broker a cease-fire or truce. Clinton and Ban are trying to help move that process along.

Clinton has met with Israeli Prime Minister Benjamin Netanyahu and Palestinian National Authority President Mahmoud Abbas. She goes to Egypt today. NPR's Philip Reeves reports that "all eyes are on the negotiations there, though no one is under any illusion that these will be easy."

We will update this post with news as the day continues.