Accessibility links
Asian-Americans Face Dilemma In Debate Over Affirmative Action : The Two-Way While they are minorities, a study found they need higher test scores than whites and other minorities to get into the same schools. 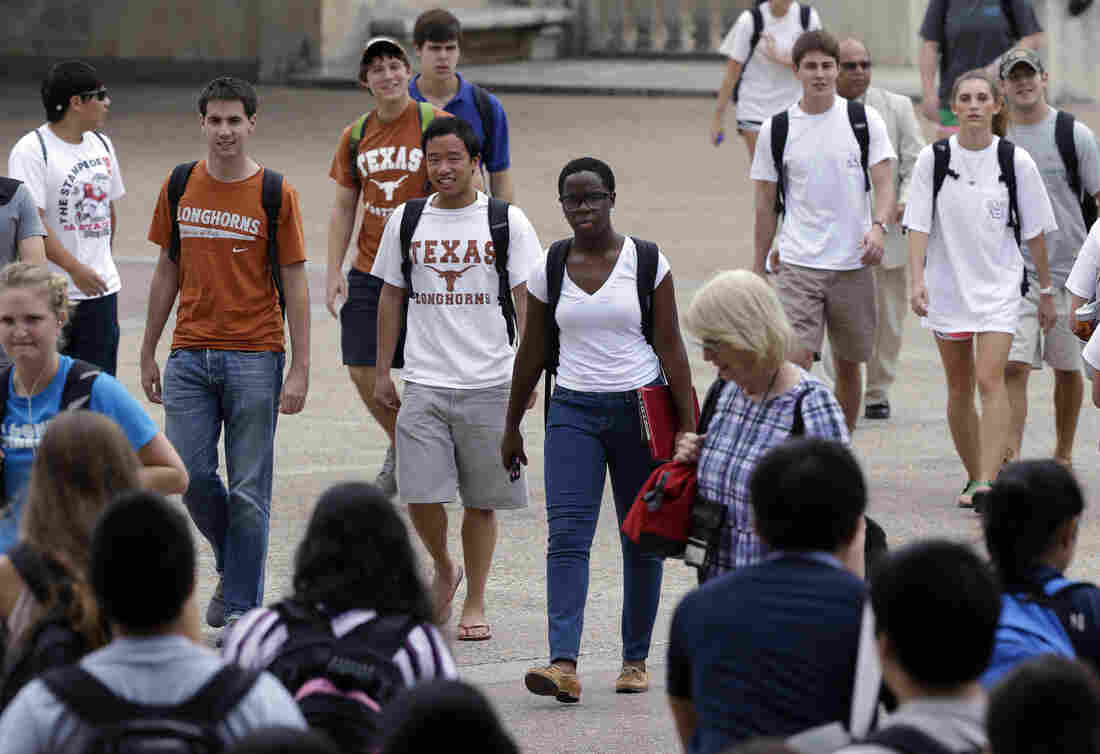 Students walk through the University of Texas at Austin campus. A case before the U.S. Supreme Court challenges the school's consideration of race in its admissions. Eric Gay/AP hide caption 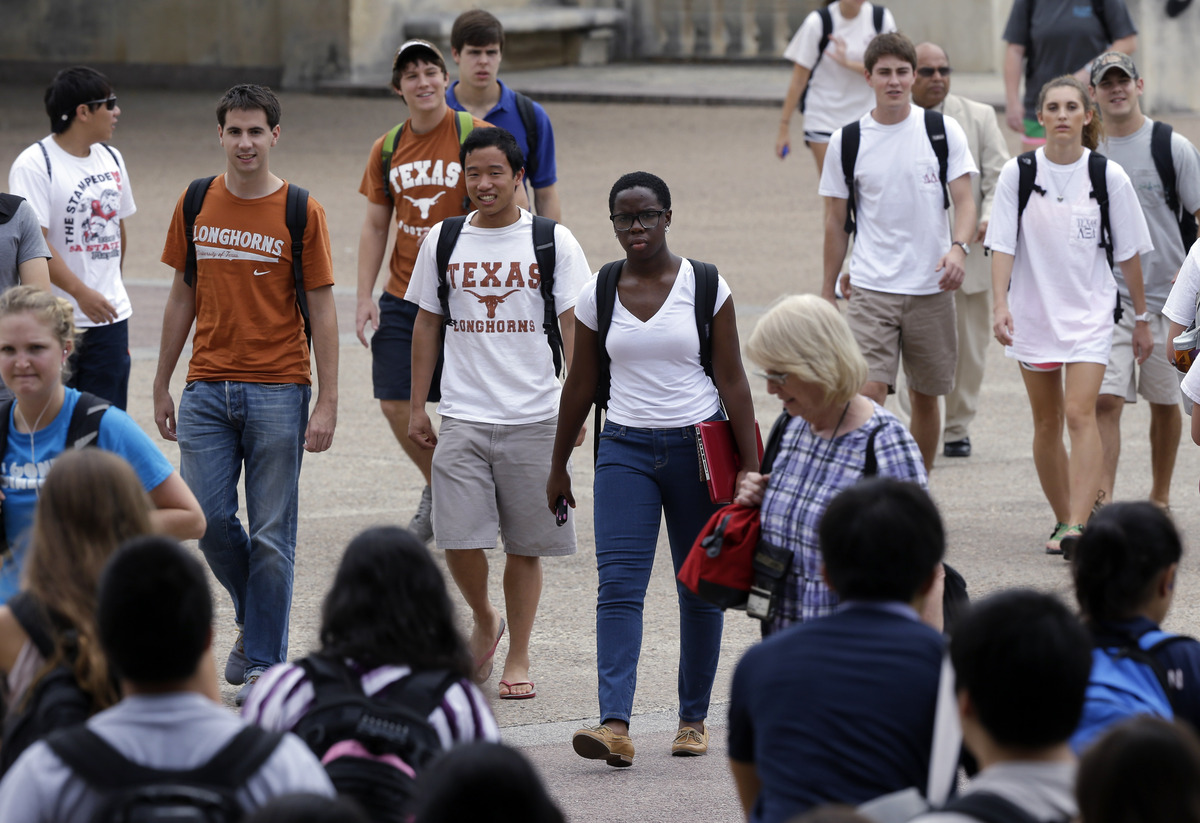 Students walk through the University of Texas at Austin campus. A case before the U.S. Supreme Court challenges the school's consideration of race in its admissions.

It's been an eventful couple of months for those following the debate over affirmative action.

Six weeks ago, the Supreme Court heard oral arguments in the case of Fisher v. University of Texas at Austin, a case that challenges the consideration of race in college admissions. On Nov. 6, voters in Oklahoma approved a measure banning the use of affirmative action in state employment, education and contracting. Then, just over a week later, a federal appeals court ruled that a similar ban in Michigan was unconstitutional, raising the prospect of a Supreme Court review.

Among those paying close attention to these developments are Asian-Americans, who have had somewhat of a prominent role in the Fisher v. Texas case. In petitioner Abigail Fisher's main brief, Asian-Americans are mentioned 22 times. The brief asserts that the university's use of race in admissions discriminates against Asian-Americans, who are deemed to be "over-represented." Asian-American civil rights organizations filed briefs on both sides of the case.

While most polling has shown that a majority of Asian-Americans support affirmative action programs, there are certainly those who don't. While no two individuals can fully represent each side's argument, it's useful to look at how individual experiences have shaped people's positions.

S.B. Woo, a retired physics professor and former lieutenant governor of Delaware, is one of the more vocal opponents of race-conscious college admissions. The founder of a political action committee dedicated to advancing Asian-American interests, Woo says for years he received letters from Asian-American parents whose children had been rejected by Ivy League schools. The schools, the parents complained, had admitted non-Asian classmates with lower test scores and fewer extracurricular activities.

Then came research that Woo felt backed up those stories with numbers.

Princeton sociologist Thomas Espenshade had found wide discrepancies in the SAT scores needed to gain admission to elite colleges. Using data from 1997, he found that Asian-Americans scoring a perfect 1,600 had the same chances of getting in as white students who scored 1,460 and African-American students who scored 1,150. It's important to note that Espenshade is not himself an opponent of race-conscious affirmative action, as he wrote in a New York Times op-ed last month. Still, his numbers are widely cited in arguments against such programs.

The second piece of research that caught S.B. Woo's attention was the "Mismatch theory" from UCLA law professor Richard Sander. The theory holds that affirmative action in college admissions hurts some minority students because it places them at schools that are much too challenging for them. It's a theory that resonated with Woo, who retired from the University of Delaware in 2002.

"Retrospectively, it was so obvious," he says. "We teach to the middle of the class. Those students who got in by some kind of artificial gadget just can't follow. Had they gone to colleges that suited their preparation, they could have shined, but instead, they dropped out."

On the other side of the argument is Winifred Kao, litigation director for the Asian Law Caucus. Kao's support of affirmative action programs dates back to her law school years. She entered the University of Michigan Law School in 1997, the same year the school denied admission to Barbara Grutter, a white student. Grutter's rejection eventually led to the Supreme Court case Grutter v. Bollinger, which found that the use of race as one of many factors in admissions decisions was constitutional.

Kao says even at a school with as progressive a reputation as Michigan's, she found the scope of class discussion severely limited by the lack of diversity at the law school, a problem she believes carries over into the field.

"When so many decisions are being written by judges, so many of whom are only from a certain demographic or life experience, some of the decisions you read are so frustrating and maddening," she says. "You see how the law gets shaped, based on the judge's life experience and perspective."

The diversity argument became central to Grutter's case against the University of Michigan, but Kao was among those who felt it was not the only argument to be made. She joined a group of students who intervened in the case, signing on as defendants alongside university president Lee Bollinger and offering testimony about the ongoing biases and inequalities they saw in admissions criteria. They argued that there are racial biases in standardized tests, for example, and inherent disadvantages for students coming from high schools with fewer Advanced Placement offerings. These are arguments Kao continues to make in support of affirmative action today.

Kao believes affirmative action has and continues to open doors for Asian-Americans, both in education and in employment, where she says, the glass ceiling is very real. She also points out that the term "Asian-Americans" encompasses a large number of people with hugely diverse backgrounds and says statistics about Asian-Americans often mask that reality.

With Fisher v. Texas, many are predicting that the Supreme Court will further limit, if not do away with, race-conscious admissions programs.

Kao declined to speculate on an outcome but says she shares the concern raised by Justice Sonia Sotomayor when she told Abigail Fisher's lawyer: "You don't want to overrule Grutter, you just want to gut it."

A decision in the case is expected by June.

(Andrea Hsu is a producer for All Things Considered.)