Accessibility links
Servicewomen, ACLU Sue Pentagon Over Combat Exclusion : The Two-Way The plaintiffs say that women are already serving in combat roles and that their exclusion is unconstitutional. One servicewoman says the policy prevents the military from assigning the best person for the job.

Four servicewomen along with the American Civil Liberties Union are suing Defense Secretary Leon Panetta over the military's policy to exclude women from combat. The policy, says the ACLU, is unconstitutional.

"The suit, which the ACLU announced at a press conference Tuesday afternoon, follows the military's ongoing analysis of what would happen if it introduced women into combat roles. The ACLU says the Pentagon is not moving quickly enough and the policy itself is unconstitutional.

"'It's harming women in the field now,' says Elizabeth Gill, a staff attorney with ACLU Northern California, which is participating in the suit. 'Significant numbers of women have fought alongside their male counterparts in the conflicts in Iraq and Afghanistan and, in fact, are fighting in combat situations.'

"'Our clients in this case have served in capacities where they're shot at by enemy fire, they're engaged, they're attached to combat units,' she adds. 'They're fighting in exactly the same circumstances as men but they're not recognized for that work.'" 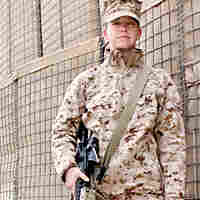 Cap. Zoe Bedell, one of the plaintiffs. ACLU hide caption

On its website, the ACLU published a post from one of the plaintiffs, Major Mary Jennings Hegar, who has been deployed twice to Afghanistan.

She tells the story of being shot at in a helicopter while trying to rescue a fellow soldier. She says the helicopter was immobilized and she had to trade fire with the enemy.

"If there is one thing I've learned about the differences between us all throughout my years of service, it's this: putting the right person in the right job has very little to do with one's gender, race, religion, or other demographic descriptor. It has everything to do with one's heart, character, ability, determination and dedication.

"That's the problem with the military's combat exclusion policy. It makes it that much harder for people to see someone's abilities, and instead reinforces stereotypes about gender. The policy creates the pervasive way of thinking in military and civilian populations that women can't serve in combat roles, even in the face of the reality that servicewomen in all branches of the military are already fighting for their country alongside their male counterparts. They shoot, they return fire, they drag wounded comrades to safety and they engage with the enemy, and they have been doing this for years. They risk their lives for their country, and the combat exclusion policy does them a great disservice."

Stars and Stripes reports that Pentagon Spokesman George Little said he would not comment about an active lawsuit, but he added that "Panetta's record on women in combat is 'very strong.'"

The DoD-authorized newspaper, which covers the military, adds that earlier this year the military opened 14,500 positions to women and also lifted "a rule that prohibited women from living with combat units."