Accessibility links
Bazooka Joe : The Two-Way A tiny comic strip has wrapped each piece of gum since 1953. But the company says it's redesigning its packaging to be more relevant to today's bubble-blowing kids. Instead of comics, there will be brainteasers and codes that unlock onilne content, The New York Times reports.

Say It Ain't So, Joe: Bazooka Bubble Gum Is Killing Its Tiny Comics

Say It Ain't So, Joe: Bazooka Bubble Gum Is Killing Its Tiny Comics 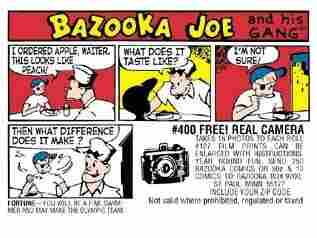 Many of us are still not over the demise of Twinkies. Now there's this.

Bazooka Bubble Gum is redoing is packaging and, says The New York Times:

"What adults may remember best about Bazooka ... is disappearing. The tiny comic strip featuring the eyepatch-wearing brand mascot Bazooka Joe that has been wrapped around each piece of gum since 1953 is being replaced.

"New inserts will feature brainteasers, like a challenge to list 10 comic book heroes named after animals, or activities, like instructions on folding the insert into an airplane. They also include codes that, when entered at BazookaJoe.com, will unlock content like videos and video games.

"Bazooka Joe and his sidekick, Mort, who wears his turtleneck up over his mouth, will appear only occasionally as illustrations in the new inserts, but without the antics and corny jokes of the three-panel strips."

Just two weeks ago, Washington Post humorist Gene Weingarten posted an interview with Jay Lynch, a main gag writer for Bazooka Joe comics from 1967 to 1990. Here's an bit of their conversation:

Weingarten: Hemingway always secretly admitted that he was proudest of The Sun Also Rises. Do you have a secret favorite strip you'd like to share?

Lyncy: In the 1980s, Bazooka Joe had a girlfriend named Zena. So I had her call and order something with a credit card. They ask her name and her expiration date, and she says, "How do I know when I'm gonna die?"

Weingarten: I remember that!

Lynch: That was mine. It was actually original. Most weren't. Most were very old jokes.

Their conversation, wrote Weingarten, "one of my favorite interviews of all time."

But starting in January, a comic will no longer wrap each piece of gum. The company says it's trying to be more relevant to today's kids.

Perhaps we won't answer the phone if Weingarten ever calls us.