Accessibility links
Blogging On The Lam: McAfee Is Posting Updates From Guatemalan Jail : The Two-Way The anti-virus software pioneer is wanted for questioning in a murder. He says he's innocent and is trying to avoid being sent back to Belize, where the murder occurred. Remarkably, he's being allowed to blog from his jail cell.

Blogging On The Lam: McAfee Is Posting Updates From Guatemalan Jail

Blogging On The Lam: McAfee Is Posting Updates From Guatemalan Jail 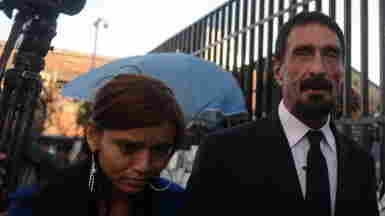 John McAfee, with a woman described as his girlfriend, on the way into the Supreme Court in Guatemala City on Tuesday. Johan Ordonez /AFP/Getty Images hide caption

Wanted for questioning in Belize about the murder of a neighbor, anti-virus software pioneer John McAfee is sitting in a Guatemalan jail — and blogging about the experience.

"I am in jail in Guatemala," he writes in one post. "Vastly superior to Belize jails. I asked for a computer and one magically appeared. The coffee is also excellent.

"Only time will tell what will happen. No one has a crystal ball. However, I would be truly shocked if I did not conduct the press conference tomorrow as I had originally planned.

"I believe, by the way, that blogging from a jail cell might be a groundbreaking activity. Let's see if it catches on."

He's been detained because Guatemalan authorities say he illegally entered that country. They could deport him, which is just what McAfee doesn't want since he's trying to avoid being arrested in connection with the death of American Gregory Faull in Belize. McAfee says he's innocent.

"My lawyer just brought a judge to the jail and the judge issued a stay order until a higher judge can review the case. This effectively stops Immigration from returning me to the Belize border.

CNN reports that Guatemalan authorities say McAfee will not be granted asylum in their country — which could mean deportation is imminent. There's no word about that now on McAfee's blog. His most recent post asks supporters to contact Guatemala's president "and beg him to allow the court system to proceed, to determine my status in Guatemala, and please support the political asylum that I am asking for."

CNN and ABC are reporting that McAfee has been taken to a hospital. ABC says it's because of a "possible heart attack." CNN reports "his attorney reported he had convulsions."