Accessibility links
Mormon Church Launches Website On 'Same-Sex Attraction' : The Two-Way Mormonsandgays.org has video testimonials from members and church leaders. One elder says that inclinations and feelings aren't sinful, but that yielding to temptations is. The church is seeking to reach out to all of its members, including gays and lesbians, "with love and understanding." 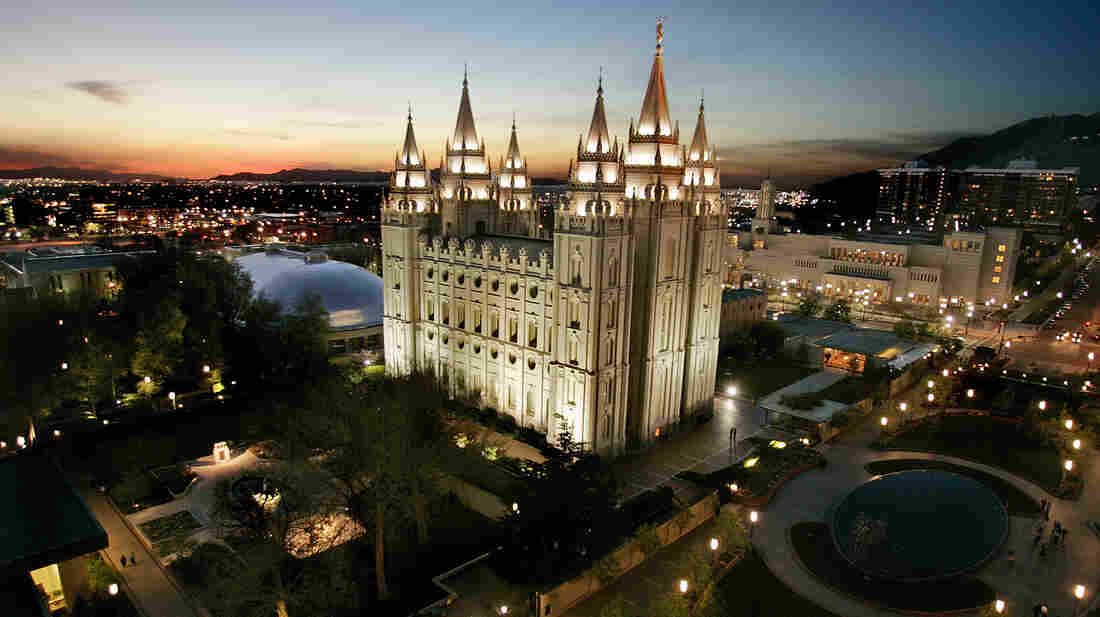 The Mormon Church has a new website to clarify its position on "same-sex attraction" and to reach out to all of its members, including gays and lesbians, "with love and understanding."

In a press release, Church spokesman Michael Purdy says the site was produced over the course of two years "and puts the entire issue in context." The site includes a number of videos from church leaders and members who share personal experiences.

"The faith still steadfastly opposes gay marriage but urges compassion and understanding, and encourages gay Mormons to remain in the faith. Church leader Dallin Oaks says on the website it's no sin to have inclinations. He says the sin is in yielding to temptations."

The church doctrine "has not changed and is not changing," Oaks says in a video. But, he continues, "what is changing and what needs to change is to help our own members and families understand how to deal with same-gender attraction."

Oaks, Slate says, "does not say that Mormon doctrine will not change." Slate continues:

"On one level, this is simply good Mormonism: The LDS Church believes in continual revelation through a living prophet, so no apostle can declare with certainty that something will never change.

"And the new website, which is hardly a celebration of gay pride, is also a savvy bit of public relations: Brad Kramer, an anthropologist at the University of Michigan who studies contemporary Mormonism (and who is Mormon himself), called the site 'an example of the curious space where PR and doctrinal shift intersect and subtly cooperate.' "

Gay rights activists met with some LDS officials in May in Salt Lake City, and Equality Ride co-director Jason Conner told The Salt Lake Tribune at the time that the church would try to use "more inclusive language."

Berkes, who has covered the Mormon church for three decades, has this further analysis of the website:

"It isn't the message that's striking about mormonsandgays.org, it's the medium.

"The belief that marriage can only be between a man and a woman is fundamental to Mormon doctrine. It stems from the notion that marriage is eternal and that families are joined for eternity in the afterlife. Mormon Apostle Russell Ballard explained this belief during in interview with NPR in 2009. Despite the revelatory nature of the faith, this concept of marriage is not something that is likely to change.

"What is changing for Mormons is the medium for the message. Mormon leaders responded to the criticism over their direct and organized support for Prop. 8 in California with attempts to describe nuances about their approach to 'same-sex attraction.'

"They actually supported an effort in Utah to prohibit housing and job discrimination based on sexual preference, and they didn't oppose health care benefits for same-sex couples in Salt Lake City, as KSL in Utah reported in 2009.

"But the characterization of Mormonism as homophobic continued right through the presidential campaign of Mitt Romney. Gay rights activists told the church that its participation in the Prop. 8 debate and vigorous opposition to gay marriage contributed to dismissiveness and harsh treatment of gays.

"So, Mormon leaders now reach out with a website, explaining directly to readers its nuanced position and urging more explicitly than before compassion and understanding.

"This is just the latest use of digital and social media by the faith, and it seems the most ambitious attempt to date. Gay Mormons are among those speaking publicly and forthrightly in ways that were unimaginable just a few years ago, especially on an official Mormon website.

"So, there's no change in doctrine and the message hasn't really changed. But it has a new framework in a new medium. It's an attempt to calm fears, quell criticism and appeal to civility, and there's nothing in it that even remotely suggests that Mormon leaders will ever reject key fundamentals of their faith and accept gay marriage."