Accessibility links
Michigan Governor Signs Right-To-Work Bills Into Law : The Two-Way The GOP-backed measures, passed earlier in the day by Michigan's state House, were signed into law by Republican Gov. Rick Snyder in the afternoon. 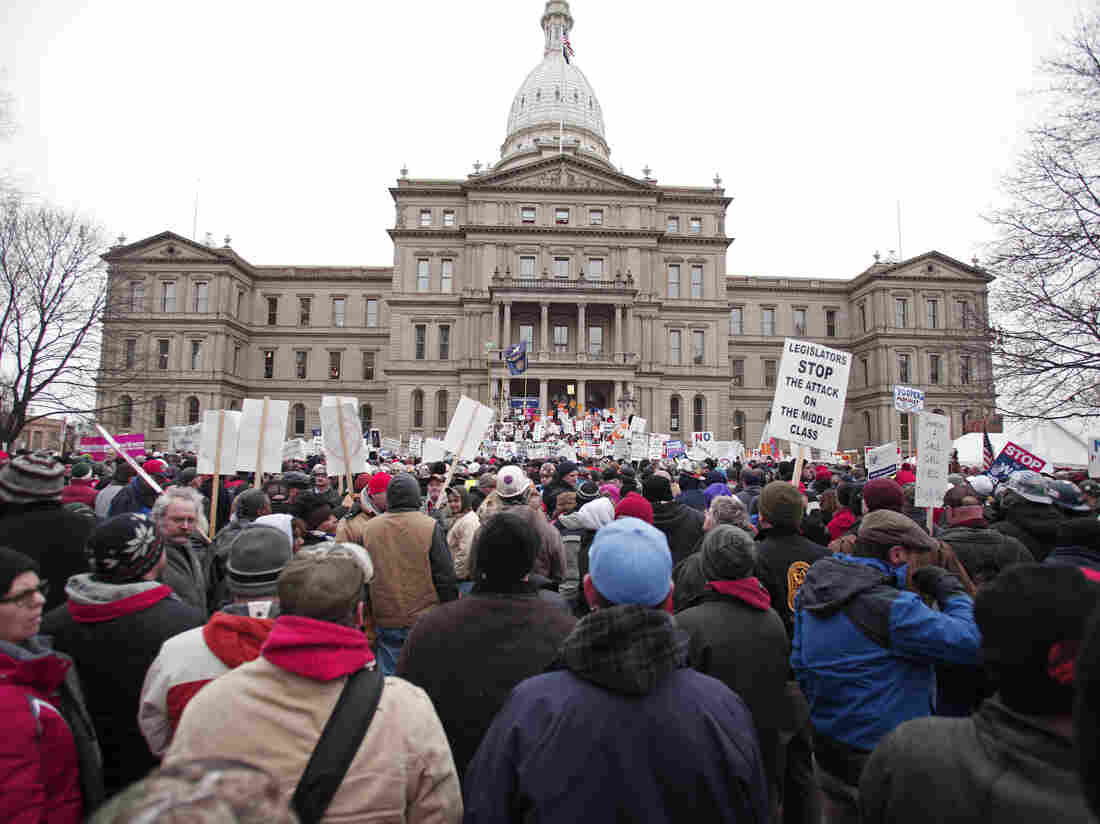 Union members from around the country rallied outside the Michigan State Capitol in Lansing as lawmakers voted on the right-to-work legislation. Bill Pugliano/Getty Images hide caption 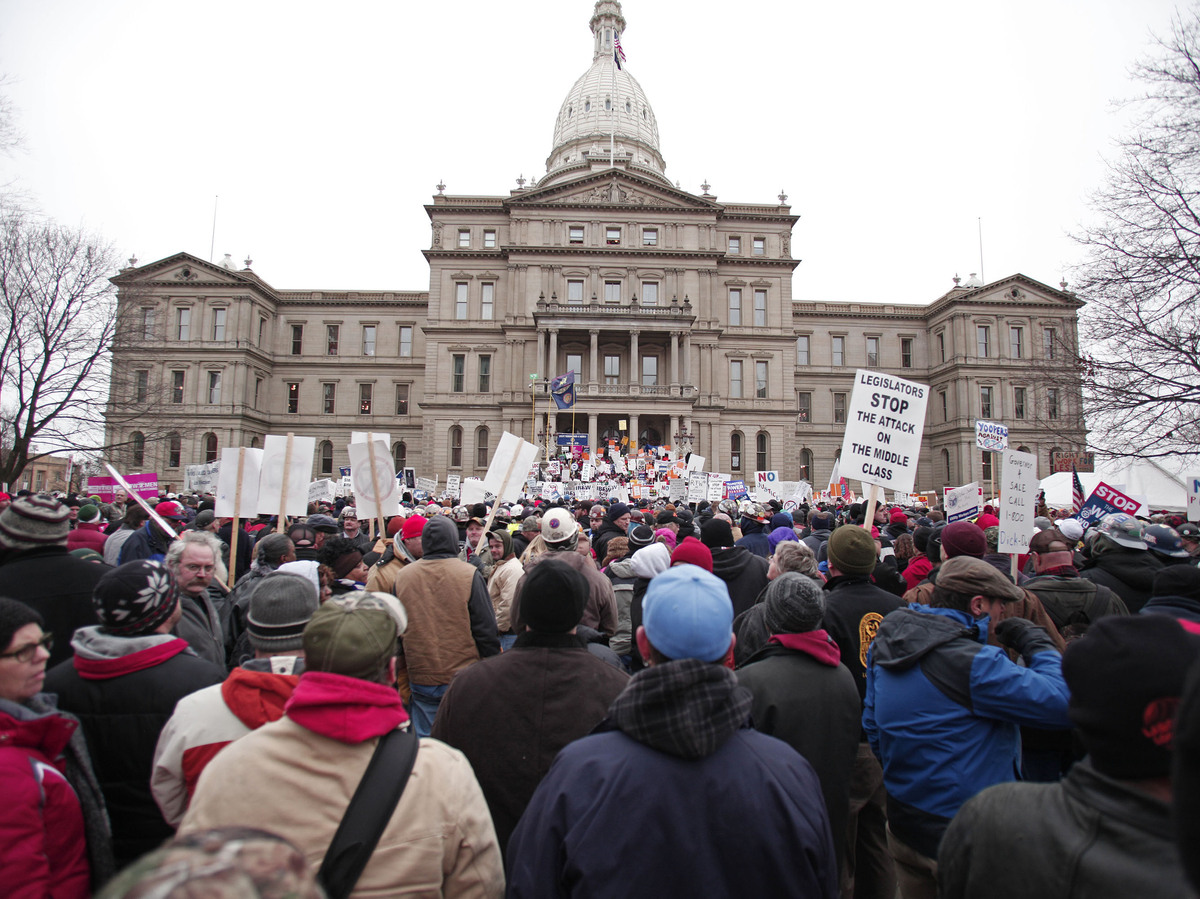 Union members from around the country rallied outside the Michigan State Capitol in Lansing as lawmakers voted on the right-to-work legislation.

The two bills give both public and private employees so-called right-to-work protections — controversial pieces of legislation that have sparked protests in and around the state capitol in Lansing.

There were reports in the afternoon of state troopers deploying pepper spray and other methods of crowd control as they try to calm the outrage being expressed by some union supporters.

We've been following the story as it developed. Scroll down to see our updates and original post.

1:35 p.m. ET: The Michigan House of Representatives has now passed two "right-to-work" bills that limit the power of unions in the state. They're pieces of legislation, as NPR's Sonari Glinton reports, that have "infuriated union leaders in a state considered the heart of the union movement."

Now the measures go to Republican Gov. Rick Snyder, who has indicated he will sign the leglsation — perhaps later today.

As Michigan Radio writes, "right-to-work laws, also known as 'anti-dues' laws, outlaw union contracts that stipulate that all workers must financially support the union in some way."

The Detroit News reports that "Michigan State Police were heavily guarding protesters who were viewing the House debate on right-to-work legislation on a video monitor mounted outside House chambers."

Update at 12:20 PM: The Michigan House has passed the first bill permitting workers to opt out of paying required fees to participate in a union. This covers public sector jobs and passed 58 to 51, reports Michigan Public Radio Networks. The next bill to be debated today will address private sector work. Loud protests continue inside the Capitol building.

Michigan Radio reporter Steve Carmody says state police are forming a 'perimeter' outside the capitol, and are wearing riot gear.

Update at 11:40 ET: The Michigan House of Representatives has taken up discussion of the first of two bills regarding fees and unions. Lawmakers are voting on amendments. The doors to the Michigan capitol building are closed because Michigan state police say the building is full.

There are reports at least three school districts in the greater Detroit area closed today. Although the districts didn't say so, it appears that teachers are using leave to travel to Lansing to protest the union bill, according to the Detroit News.

It seems to be a repeat of the 2011 union battle in Wisconsin — a Republican-led state legislature, supported by a Republican governor, suddenly takes up legislation that could change how unions are financed and run in the state.

Now, it's December, 2012, and the scenario shifts to Michigan, where the lame-duck legislature, poised to lose some GOP seats, undertook what's known as a right-to-work bill. This would prohibit unions from requiring members to pay dues.

Both the Michigan house and senate chambers passed the bill and Gov. Rick Snyder plans to sign it into law. As in Wisconsin, Michigan union members have descended on the capital, Lansing, with crowded rallies and vows of political action. Rick Pluta of Michigan Public Radio Networks says different union groups showed up.

The legislature opens its session today at 10 a.m. EST, according to the Detroit Free Press. Rick tells us despite the demonstrations, there's enough support to give the bill final passage.

And capitol police are ready, too. The Detroit News reports they've closed streets and state police troopers are carrying batons and tear gas devices. Last week, police used pepper spray to force union protesters out of the capitol, apparently after a few of them tried to rush the senate floor.