Accessibility links
Sources: Syrian Rebels Training On Anti-Aircraft Weapons In Jordan : The Two-Way The Syrian rebels have long been pleading for more powerful weapons in their fight against the Syrian regime. Now, sources say they are being trained to shoot down Syrian military aircraft. 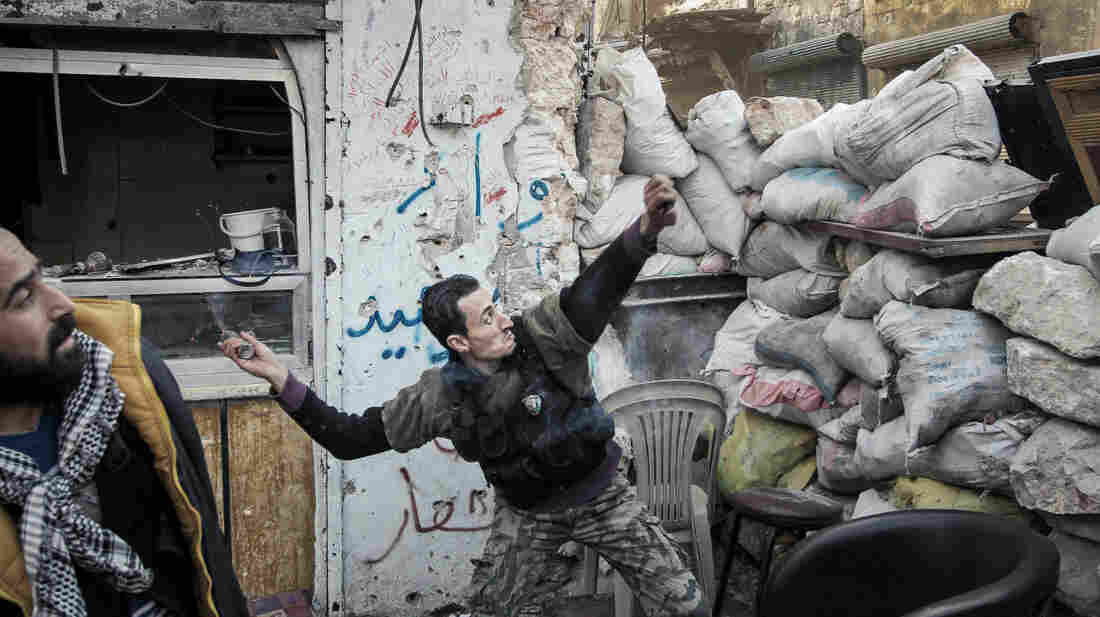 To date, Syrian rebels have had to rely on small-scale weapons in their fight against the Syrian army. Here, a rebel fighter throws an explosive device toward a Syrian government position in the northern city of Aleppo last month. John Cantlie/AFP/Getty Images hide caption 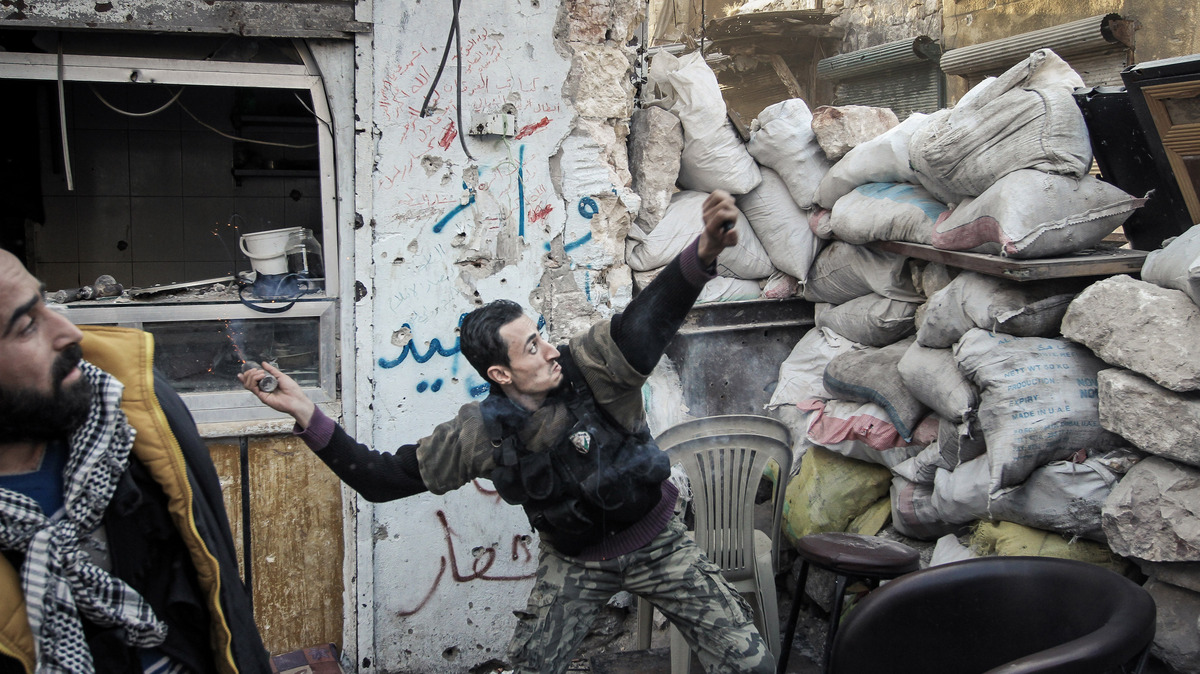 To date, Syrian rebels have had to rely on small-scale weapons in their fight against the Syrian army. Here, a rebel fighter throws an explosive device toward a Syrian government position in the northern city of Aleppo last month.

The U.S. has now formally recognized a new Syrian opposition group as the legitimate representative of the Syrian people. But the U.S. has repeatedly declined to provide weapons for rebels fighting President Bashar Assad's army.

However, NPR has learned that there are movements behind the scenes. In Jordan, several Syrian sources said that Jordanian authorities, along with their U.S. and British counterparts, have organized training for Syrian rebels on sophisticated anti-aircraft weapons.

The Syrian sources would not identify the weapons or where they came from, but they indicated they were the kind of arms that could have a dramatic impact in the fight against Assad's military.

Since the summer, the Syrian air force has been pounding rebel strongholds with helicopter gunships and fighter jets. Those bombings have killed hundreds, if not thousands, and many of the casualties have been civilians.

In recent weeks, the rebels have acquired anti-aircraft weapons from Syrian military arsenals, after capturing key air-defense bases in northern and central Syria. The rebels successfully downed a Russian-made MiG fighter jet late last month. It was the first time the rebels succeeded in assembling and firing an SA-16 shoulder-to-air missile.

Training For The Rebels

One Syrian rebel fighter, who did not want to be named, said he attended a training course in Jordan and that the training was not led by uniformed Western soldiers, but rather by men in plainclothes who spoke several different dialects of Arabic. This suggests the trainers may have been private contractors, who are sometimes used by the U.S. for training and assembly of sophisticated weaponry. The rebel fighter also said members of the Jordanian military attended the training sessions.

The source said he and about 25 others took part in the course. He said a handful of rebel groups fighting inside Syria each sent a few men to the training.

Another source said hundreds of men have done the training in the past two to three months.

These two sources — along with two other sources (none of whom wanted to be named) — said it was their impression that the sophisticated anti-aircraft weapons are present in Jordan and could be transferred into Syria at any time.

"You have to unite first," a source quoted one American as saying during a training session. The reference is to disparate rebel groups fighting in Syria who don't follow a clear chain of command.

"They want us to have structures. It's all about structures," said a second source, a Syrian army officer who defected and comes from a prominent family.

This same source said uniformed U.S. military officials regularly meet with Syrian defectors to discuss military planning. He said the current debate centers around whether rebel fighters should first seize the southern Syrian region of Dera'a, just across the border from Jordan, before making a march to the Syrian capital, Damascus, just an hour's drive away.

Another option would be for the rebels to focus all their attention and resources on Damascus, where some rebel groups have already launched an offensive east of the city and on the civilian airport.

Several sources said the focus of this military training and advising has been on professional soldiers who defected from the army, rather than civilian fighters who might have a more religious bent.

The officer who defected said the U.S. and Jordan hope to avoid what they call the "mess" in northern and eastern Syria, where Islamist fighters like Jabhat al-Nusra have dominated the fight. That group has been designated by the U.S. as a terrorist organization.