Accessibility links
The Story Behind A Striking Image Of The Scene At Sandy Hook : The Two-Way Moments after a brutal attack began at an elementary school in Newtown, Conn., Friday, Newtown Bee associate editor Shannon Hicks sped to the scene. Before the day was over, she would act in two capacities: as a journalist, and as a volunteer firefighter. 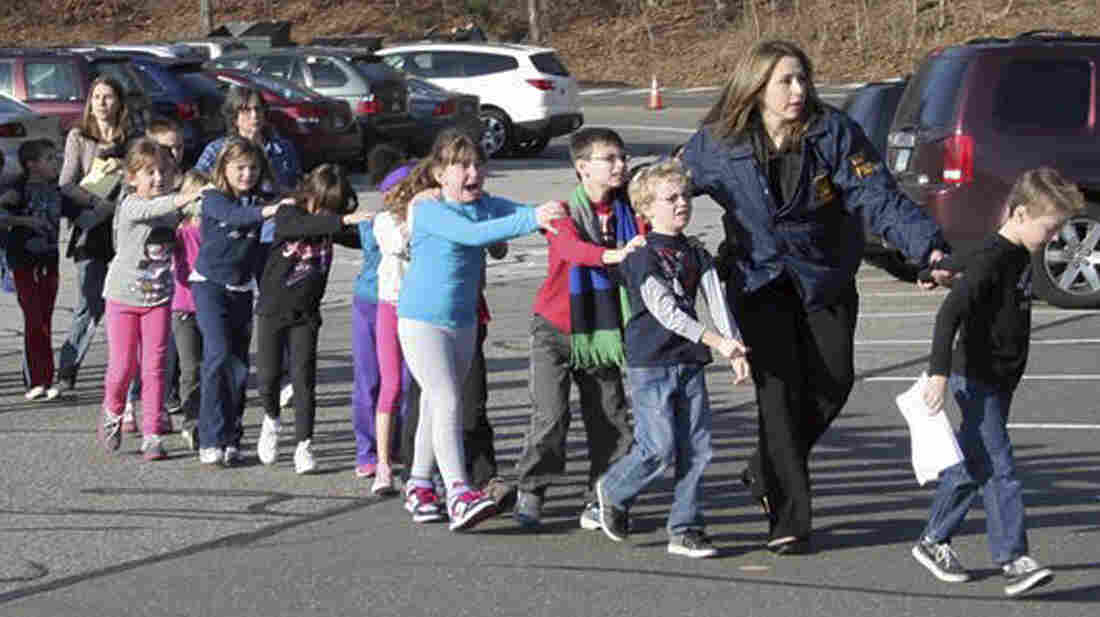 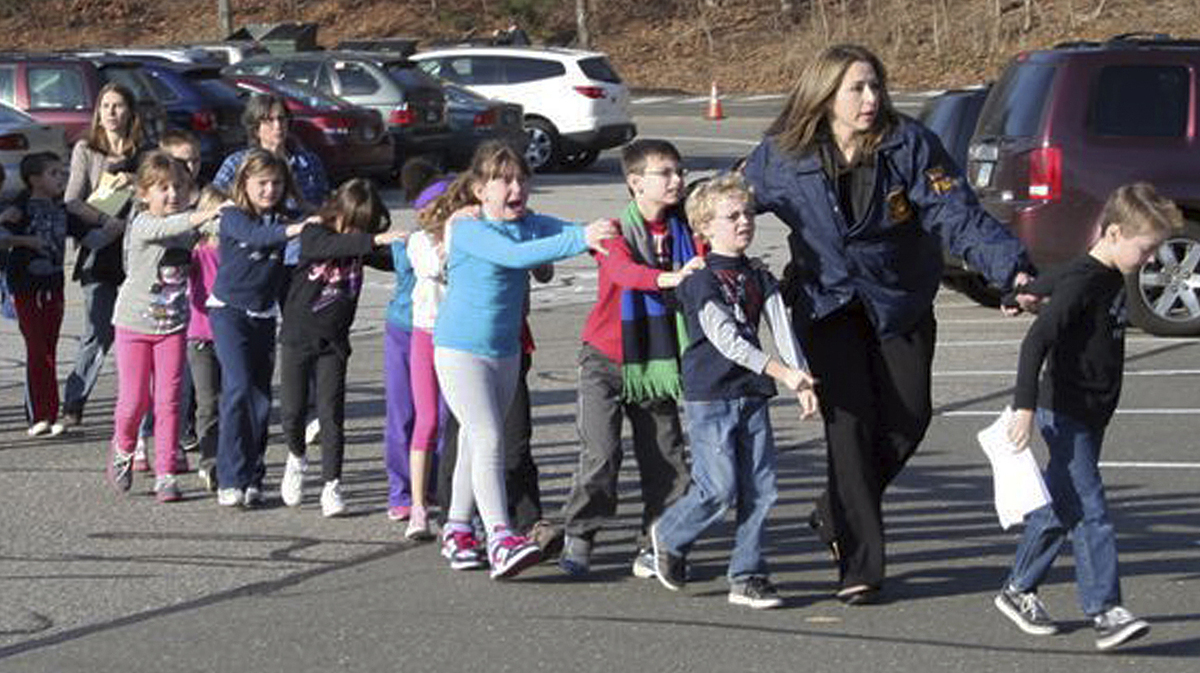 In a photograph taken by Shannon Hicks, police and teachers lead children away from Sandy Hook Elementary on Friday, Dec. 14.

Update at 12:43 p.m. ET, Dec. 20: After we published this post, Shannon Hicks of The Newtown Bee got in touch to clarify details from the day of the Sandy Hook shooting. The text below now reflects those clarifications. For details of the revisions, please see the bottom of the post.

Moments after a brutal attack began at an elementary school in Newtown, Conn., Friday, Newtown Bee associate editor Shannon Hicks sped to the scene. Before the day was over, she would act in two capacities: as a journalist, and as a volunteer firefighter.

After arriving on the heels of the first batch of responders, Hicks helped define a senseless tragedy that has yet to be fully understood, or explained.

As she tells the Poynter Institute, Hicks was at the offices of The Bee, a weekly newspaper, when the alert of a shooting went out on the police scanner. She immediately drove to Sandy Hook Elementary, less than two miles away.

Some time after she arrived, Hicks saw a line of children being led away from the school. That's when she snapped a photograph that would soon be featured on news TV channels and websites, as her newspaper complied with a request from the AP to provide the photo for wide distribution.

For many people, that photo has become a lasting image of the horrible tragedy in Newtown, capturing the innocence of the young children at the school, and the terror and panic that erupted when a gunman opened fire inside its walls.

When Hicks took the picture, she was on the scene as an associate editor of her paper. And when another editor arrived, she changed into her firefighting gear and tried to help. But there was nothing she could do — at that point, the school was the scene of police activity.

Speaking by phone, Hicks says that it wasn't until some time later that the fire department was called in.

"Fire was not dispatched to the scene until 10:03," she says. "Because of the way this incident played out, it was a crime scene, then ambulances were sent, then fire was dispatched."

And as NPR's David Schaper has since reported, many of the police, emergency, and fire personnel who arrived at the school were left feeling helpless, unable to apply their skills and training to save lives.

Eventually, Hicks returned to work at the newspaper's offices.

Of her photograph's wide dissemination, Hicks tells Poynter's Julie Moos that she has mixed feelings — especially because in the tragedy's aftermath, it is a very sensitive matter to depict children who were at the school.

"Hicks was aware the photo was on the front page of Saturday's New York Times (her mother told her), but was unaware it was on the cover of many other newspapers across the U.S.

"'I'm conflicted,' she said. 'I don't want people to be upset with me, and I do appreciate the journalists, especially, who have commented, saying 'We're just documenting the news.'"

"It's harder when it's in your hometown and these are children we're gonna watch grow up, the ones who made it. I know people are gonna be upset, but at the same time I felt I was doing something important."

Although it is only published once a week, The Newtown Bee has used its website, Twitter feed and Facebook page to update its readers, and to relate how a community is enduring a tragedy that put its small town on the national map.

While our original text described Shannon Hicks going to the school first as an editor and later acting as a volunteer firefighter, we rewrote the first paragraph to make that distinction plain. Hicks also graciously provided more clarification, including the quote we have added about the school's status as a crime scene.

And we added a link to David Schaper's feature on the police, fire and emergency personnel who are coping both with what they saw at Sandy Hook, and the idea that they could do nothing to help.