Accessibility links
Only 'A Good Guy With A Gun' Can Stop School Shootings, NRA Says : The Two-Way National Rifle Association officials say armed officers need to be put in every school. They were reacting to last Friday's mass shooting in Newtown, Conn. 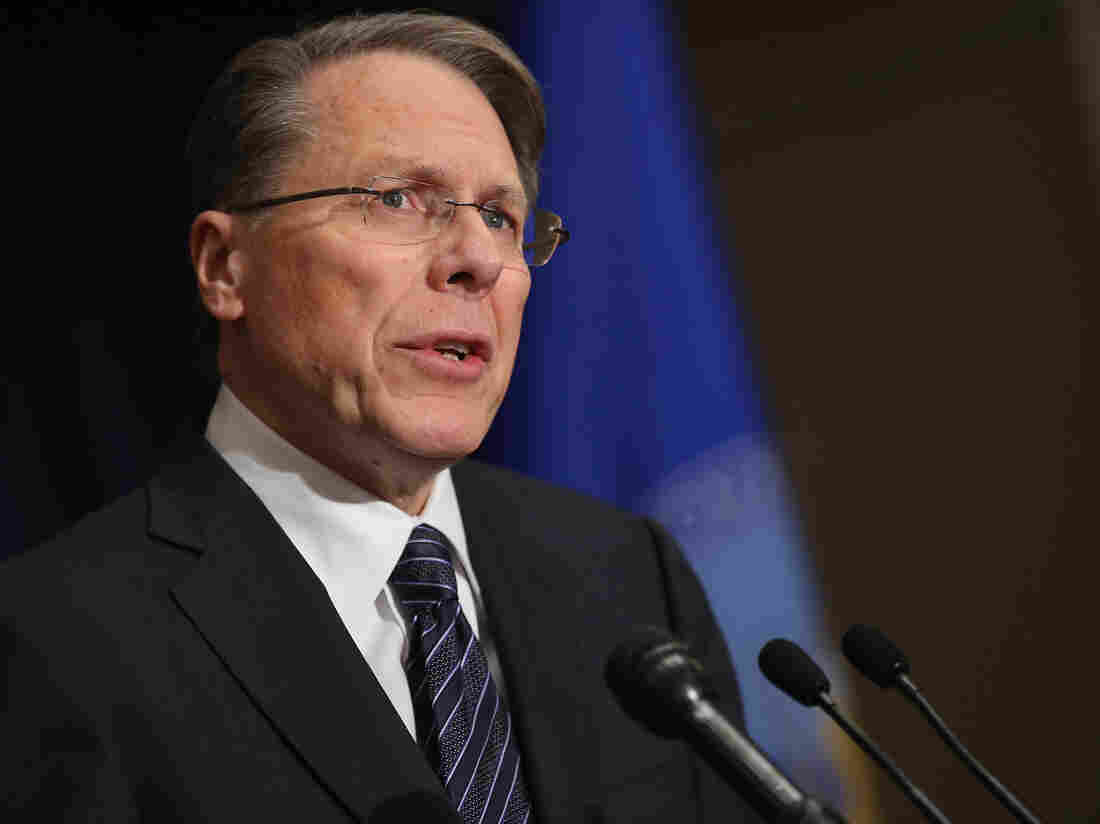 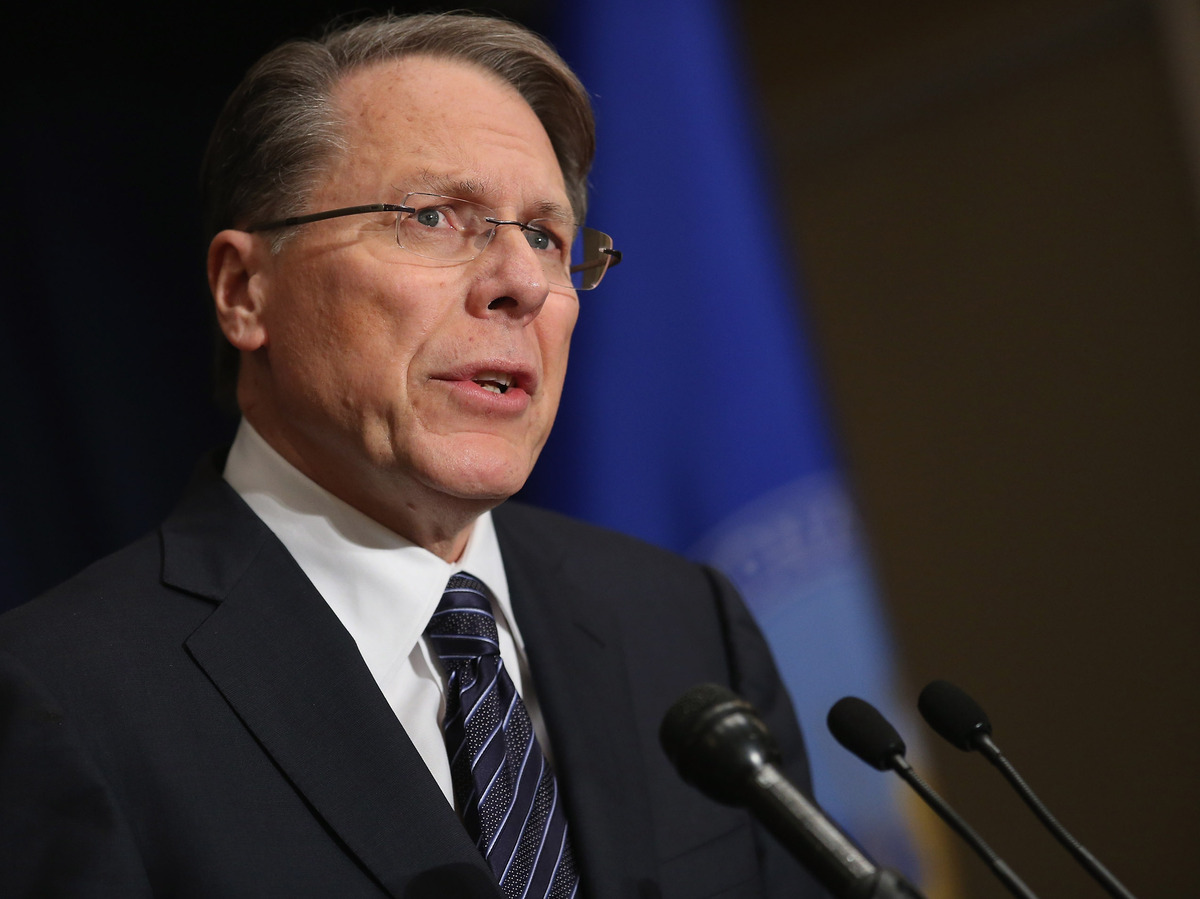 Saying that last week's mass shooting at an elementary school in Newtown, Conn., could have been prevented or stopped if there had been armed, trained security personnel on site, officials of the National Rifle Association on Friday called for Congress to appropriate funds to put police officers in every American school.

The NRA also said it is launching a "National School Shield" training program to help — at no cost — schools train security personnel and develop security plans.

And, NRA officials blamed the news media for focusing on what they view as the wrong issue — guns — rather than violent video games and the nation's mental health care programs.

The event was briefly interrupted twice by individuals who stood up with banners and shouted that the NRA has "blood on its hands" and is "killing our kids."

It was the organization's first lengthy response to the attack that left 20 school children and six adults dead at Newtown's Sandy Hook Elementary School, which has reignited a national debate over whether gun laws need to be tightened. LaPierre and others who spoke gave no indication they favor any such actions.

We posted updates as the NRA's news conference in Washington happened. Scroll down to see the highlights.

From the Web: "Six Ways The NRA Would Deal With Gun Violence." (The Washington Post's Wonk Blog)

David Keene, NRA's president, ends the event by saying that NRA officials won't be taking questions, but will start to be available to reporters "beginning on Monday."

As former congressman Asa Hutchinson (R) speaks, the NRA has launched a webpage about its "National School Shield" program that it says will — for free — help schools train security officers and develop security plans.

"School safety is a complex issue" with no single solution, Hutchinson says. But the program, he adds, will make a difference.

"Every single school in America" will have the opportunity to take advantage of a free program, sponsored by the NRA and run by former Homeland Security official (and congressman) Asa Hutchinson, to help train security personnel for a "national school shield safety program," says Wayne LaPierre, NRA's executive vice president.

Update at 11:22 a.m. ET. A Call For Congress To Put Police Officers In All Schools:

"I call on Congress, today, to act immediately to appropriate whatever is necessary to put armed police officers in every single school in this nation," says Wayne LaPierre, NRA's executive vice president.

Update at 11:20 a.m. ET. What If Adam Lanza Had Been Confronted By An Armed Guard?

"What if when Adam Lanza started shooting his way into Sandy Hook Elementary School" he had been confronted by a trained, armed security guard, asks Wayne LaPierre, NRA's executive vice president? He calls for all schools to have at least one police officer on site.

"The only thing that stops a bad guy with a gun is a good guy with a gun," says Wayne LaPierre, NRA's executive vice president, after he talks about how the teachers and staff at Sandy Hook Elementary School couldn't stop gunman Adam Lanza because none of them were armed.

"The NRA has blood on its hands! ... Ban assault weapons now!" a woman shouts as she is led from the room.

Wayne LaPierre, NRA's executive vice president, pauses as she's taken away and then returns to his discussion of what he sees as the news media's mistakes. "They don't know what they're talking about."

Wayne LaPierre, NRA's executive vice president, asks why the news media doesn't do more to call attention to an industry that "sells and sows violence against its own people" — the manufacturers of "vicious, violent video games."

The next Adam Lanza [the killer in Newtown], says NRA Executive Vice President Wayne LaPierre, is already "planning his attack."

"How many more copycats are waiting in the wings for their moment of fame from a national media machine that rewards them?" he asks.

And LaPierre notes there is no "active national database of the mentally ill."

As Wayne LaPierre, NRA's executive vice president, was speaking, a protester stood up with a banner saying "NRA Killing Our Kids." As the man is led from the room, he shouts that the NRA is "killing our children." LaPierre pauses as the man is escorted out.

At the opening, NRA President David Keene says that "like most Americans," NRA officials were "shocked" by the shootings in Newtown that left 20 school children and six adults dead at Sandy Hook Elementary School.

He says the organization will not be taking questions today, but will be trying to lay out its views on what needs to be done.

Wayne LaPierre, NRA's executive vice president and best-known spokesman, comes to the microphone to express the organization's "horror, outrage [and] grief" and to say the NRA offers its "earnest prayers" to the families and victims.