Accessibility links
As Water Level Falls, Concerns About Mississippi River's Barge Traffic Rise : The Two-Way The drought gripping the nation's midsection has made the river very hard to navigate from St. Louis to Cairo, Ill., where it meets the Ohio River. By next week, barge traffic may have to halt altogether in that section, trade groups warn. 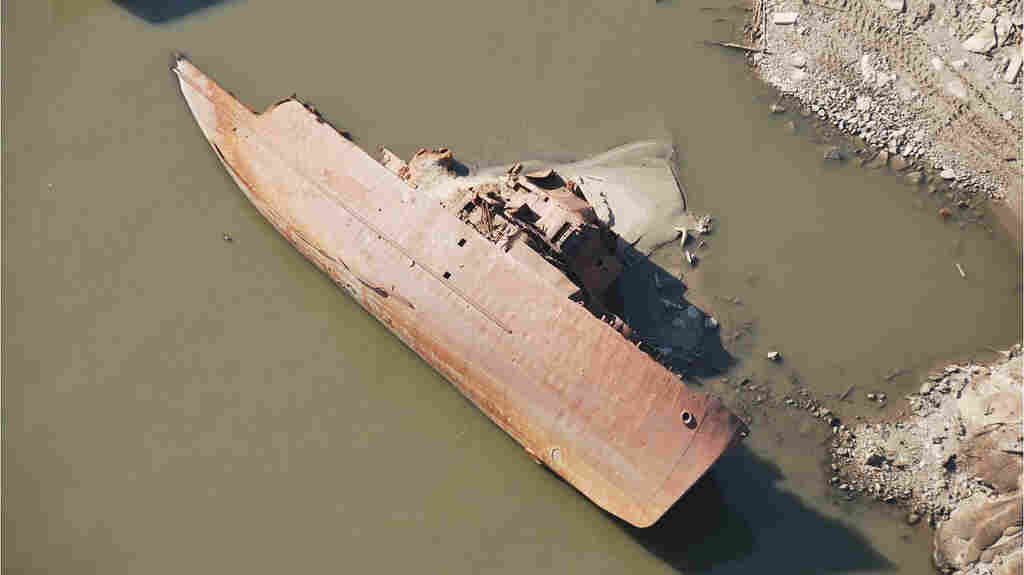 This WWII-era minesweeper once was a floating museum in St. Louis. Swept away in a 1993 flood, it has been under water in the river for most of the years since. But the ship has been exposed as the river's water level has fallen. (Photo taken on Dec. 14.) Army Corps of Engineers hide caption 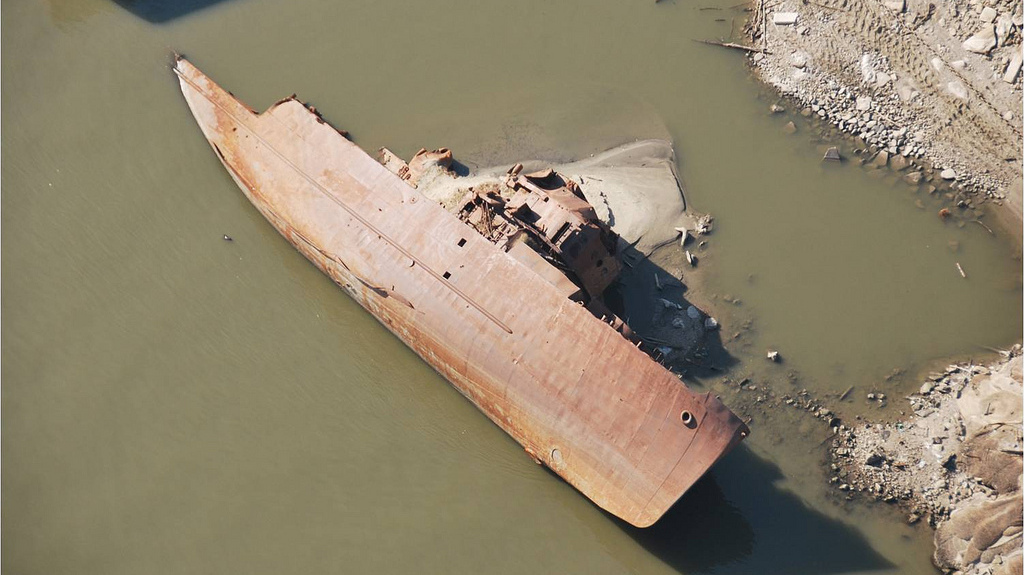 This WWII-era minesweeper once was a floating museum in St. Louis. Swept away in a 1993 flood, it has been under water in the river for most of the years since. But the ship has been exposed as the river's water level has fallen. (Photo taken on Dec. 14.)

With a gauge at the tricky section of the Mississippi River near Thebes, Ill., already registering a remarkably low water level — and projections that it will fall further in coming days and weeks — trade groups are warning that barge traffic through that part of the river may have to halt completely as soon as next week.

The Army Corps of Engineers, as Marketplace Sustainability reports, continues to move and break up rocks in that stretch of the river in an effort to keep the shipping channel open for about 180 miles from St. Louis to Cairo, Ill., where the Mississippi meets the Ohio River. Traffic has already been slowed. Ships can only pass through at night, when the Army Corps isn't working.

Reuters notes that the Corps has also "released water from a southern Illinois lake into the river to aid transportation." But the ongoing drought across much of the nation's midsection and ice upriver that is slowing water headed downstream mean the situation above Cairo is likely to only get worse.

The negative effects could be substantial. According to Bloomberg News, "shippers carry about $7 billion in goods including crude oil and grain on the Mississippi in December and January. Tugboat and barge operators have warned that thousands of jobs in Illinois, Missouri, Louisiana and other states in the country's midsection were at risk if the river shuts down."

Still, Bloomberg adds, the Corps is hopeful that any disruption would be relatively short: "We remain cautiously optimistic that if we do have any interruptions, it will be short in duration as we continue to maintain a safe and reliable navigation channel," Major General John Peabody, the Corps' Mississippi Valley Division commander, said in a statement released Monday.

Lynn Muench, senior vice president of regional affairs with American Waterways Operators, a trade group, tells Marketplace that the Corps should have moved sooner to clear rocks from the bend at Thebes.

For ongoing coverage of the Mississippi's water woes, check with our colleagues at St. Louis Public Radio.