Accessibility links
Anger Swells As Indians Mourn For Rape Victim : The Two-Way As thousands of candles glow at a somber scene in a central Delhi park on Saturday, there is quiet, sober reflection in India about the tragic end of a young woman who has come to symbolize violence against all women in India. 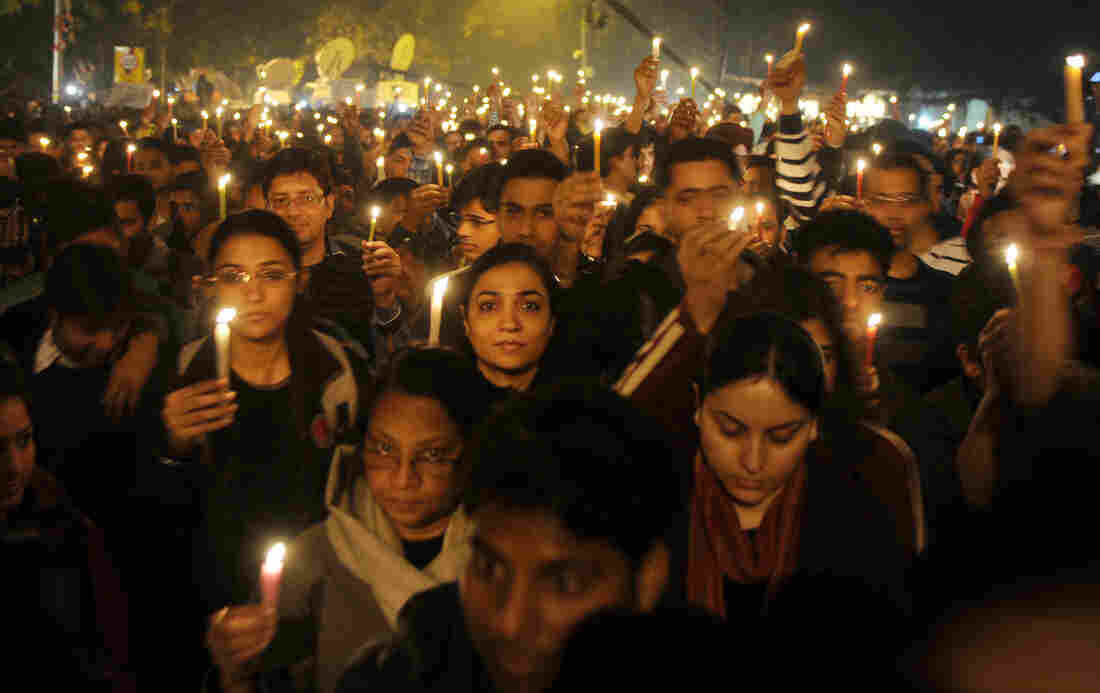 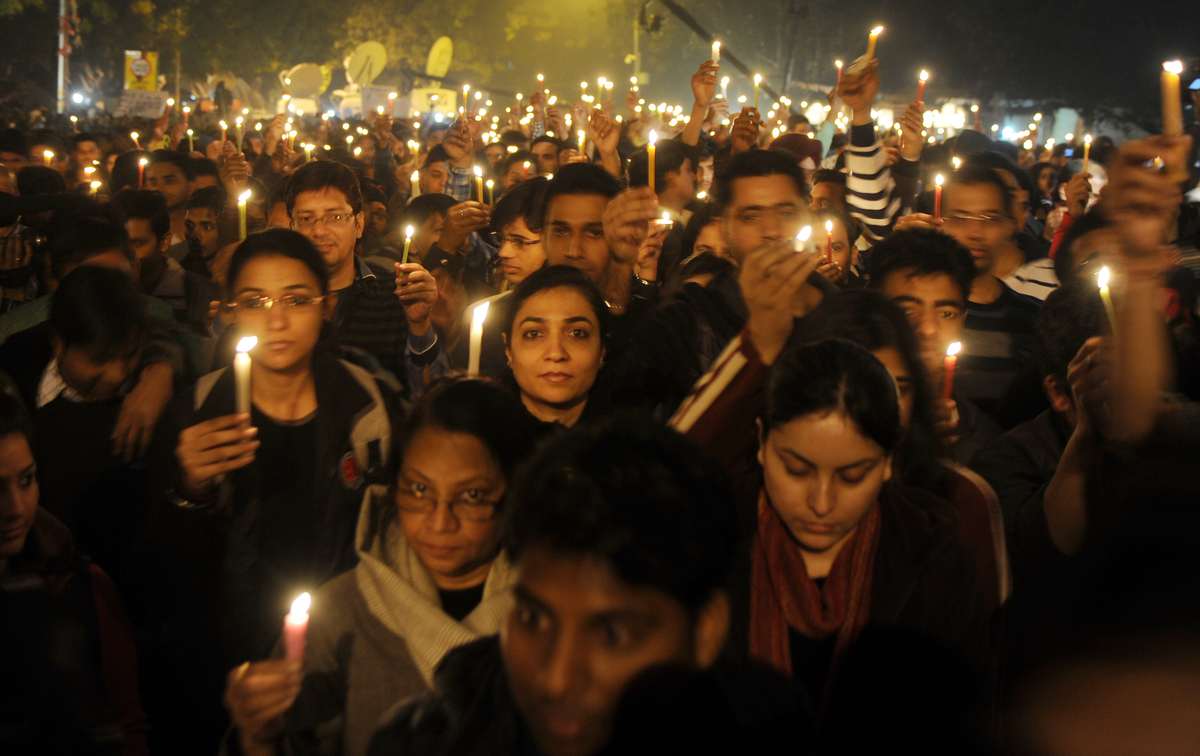 Protesters hold candles during a rally in New Delhi late Saturday following the death of a woman gang-raped on a bus.

By Saturday evening, more than 1,000 candles glowed at a somber scene in a central Delhi park as India mourned the death of the young woman whose gang rape two weeks ago shocked the country.

What began 13 days ago with a handful of well-wishers holding a hospital vigil for the rape victim swelled into thousands as a young generation of Indians demanded an end to the culture of violence that produced more than 24,000 cases of rape last year alone.

The case of the young student, gang-raped on a bus as it passed through police checkpoints, was especially harrowing. Police said the victim had been beaten with an iron rod that assailants also inserted into her body.

She succumbed to multiple organ failure early Saturday morning at the Singapore medical center where she had been flown 10 days after treatment in a Delhi hospital failed to revive her. Dr. Kelvin Loh, chief executive officer of Mount Elizabeth Hospital in Singapore, said in a statement that the young woman "passed away peacefully" with her family and officials of the Indian Embassy by her side. 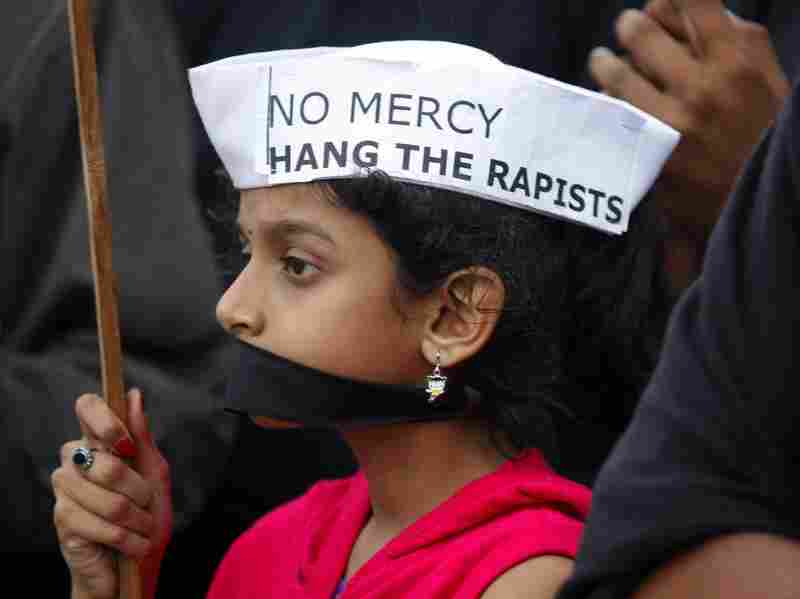 Protesters are demanding death for the six men now accused of both rape and murder. Aijaz Rahi/AP hide caption 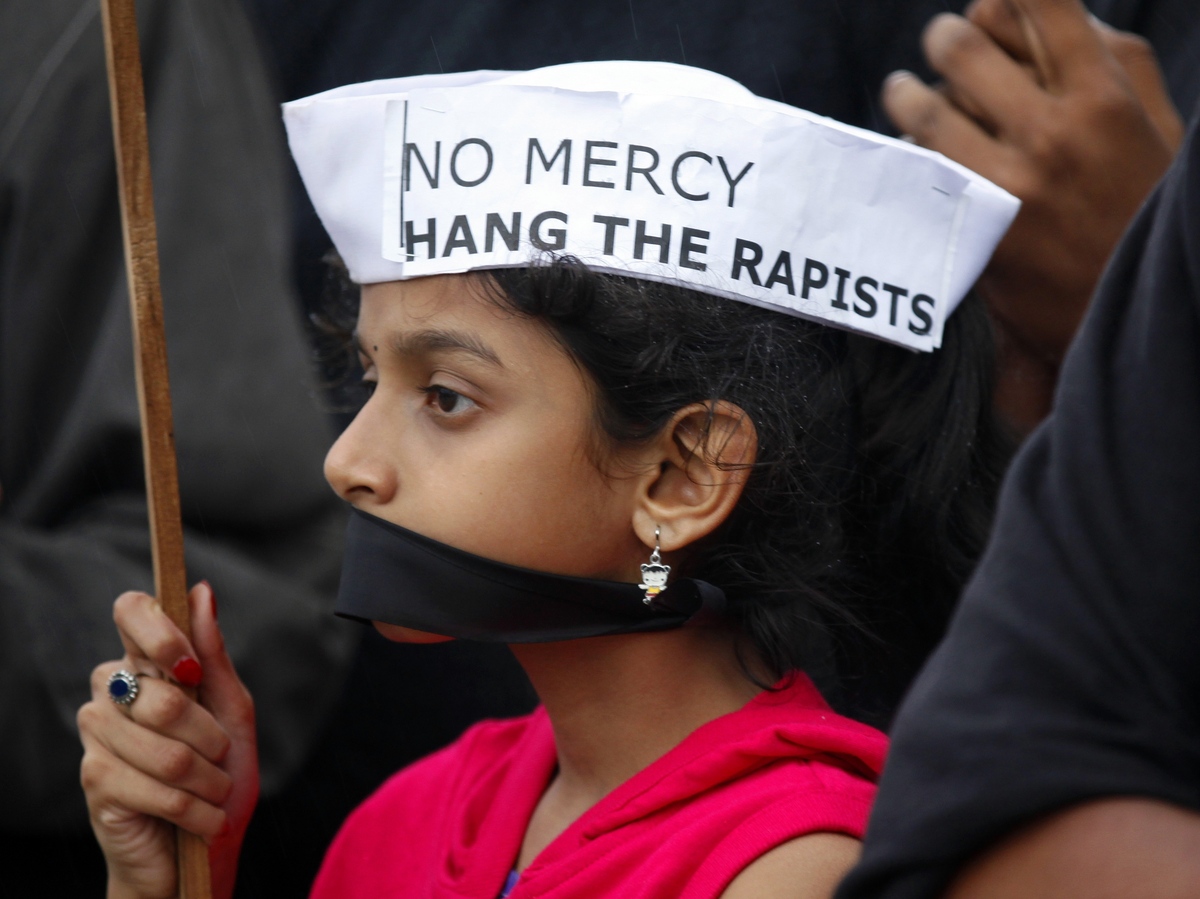 Protesters are demanding death for the six men now accused of both rape and murder.

At a subdued assembly back in central Delhi, 19-year-old B. Shuharsan held up a sign: "Are the doctors in India inefficient?" He answered his own question, saying, "No, the decision to move her was political."

Skepticism abounds over the government's ability to curb the violence that has made Delhi the "rape capital" of India. Sealing protesters away from India Gate, a central Delhi landmark, has angered many, as has the failure of political leaders to publicly engage the demonstrators.

"The government has been trying to get a piece for itself out of this whole phenomenon, Shrinkhla Agrawal said at Saturday's protests. "I'm not sure that they are really concerned about the issue."

Congress Party leader Sonia Gandhi sought to address the criticism in a rare television broadcast Saturday. "To all of you who have stood vigil, who have expressed your anger and anguish publicly," she said, "I want to assure you that your voice has been heard."

Novelist Chetan Bhagat wrote in The Times of India on Saturday, "The anger seen at India Gate was not just for one particular case or issue. It was an outpouring against an uncaring and indifferent government. ... The silent treatment doesn't work with people in the digitally connected world."

Late into the winter night, Indians continued their vigil, demanding speedy justice for the six accused. Handwritten signs read, "Hang Them 'Til They Die." The government says it is examining capital punishment for the crime of rape.

From tear gas and water cannons one week ago, Delhi has come full circle. On this Saturday night there is quiet, sober reflection about the tragic end of a young woman who has come to symbolize violence against all women in India.

After passing away at a hospital in Singapore, the young woman was flown back to New Delhi early Sunday, The Associated Press reports. The AP says the cremation is expected to take place later Sunday.