Accessibility links
On Ray Lewis' Retirement, Some Media Fail To Mention 2000 Murder Case : The Two-Way Star NFL linebacker Ray Lewis announced that he will retire when his team's season ends, prompting many reports about his career and legacy — and little mention of Lewis' role in a murder case in 2000. 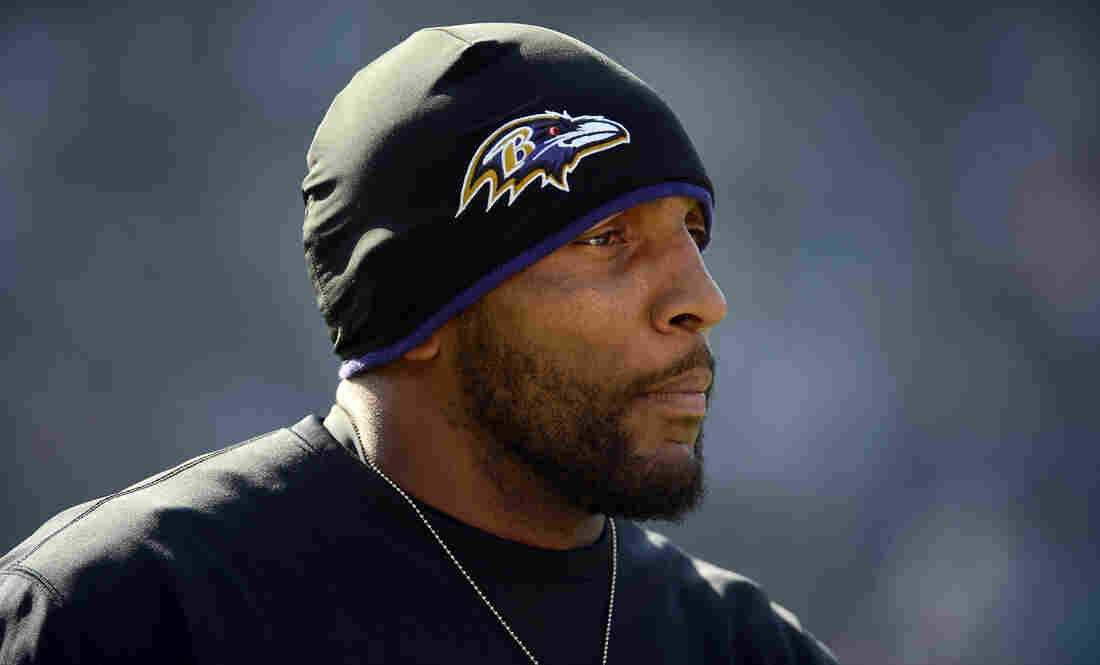 Linebacker Ray Lewis announced Wednesday that he will retire after the Baltimore Ravens' season ends. Most media coverage of Lewis' legacy has omitted his part in a 2000 double-homicide case. Harry How/Getty Images hide caption 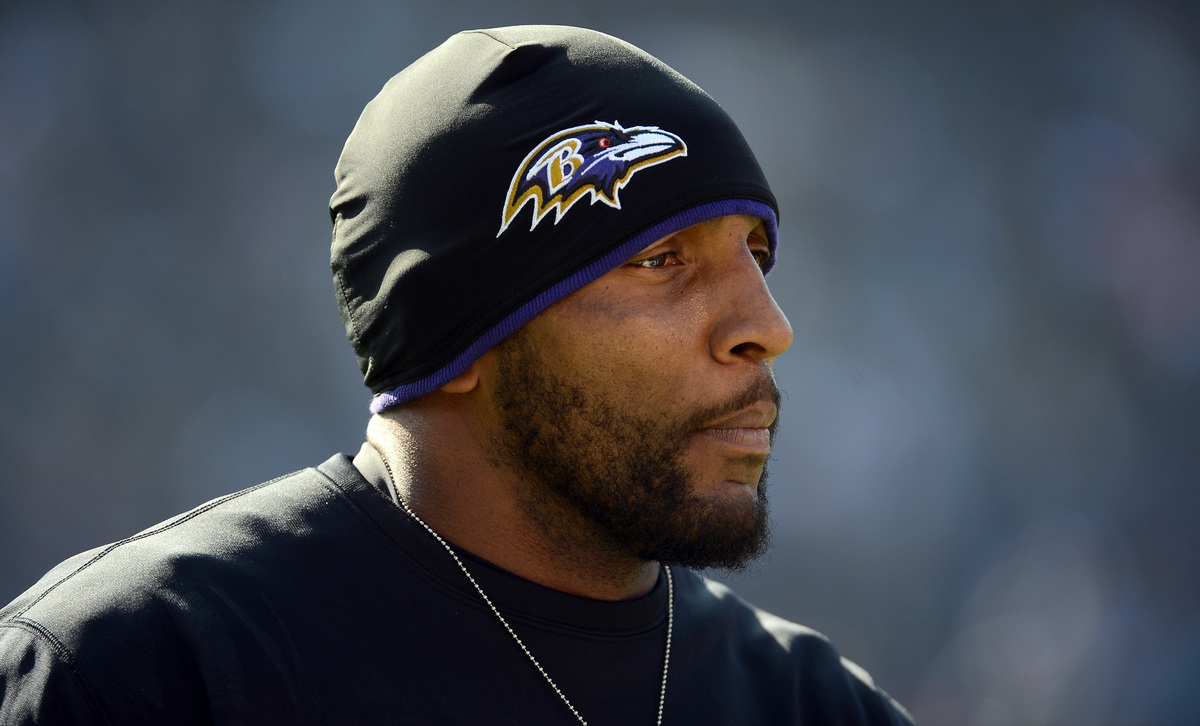 Linebacker Ray Lewis announced Wednesday that he will retire after the Baltimore Ravens' season ends. Most media coverage of Lewis' legacy has omitted his part in a 2000 double-homicide case.

Baltimore Ravens linebacker Ray Lewis' announcement of his retirement Wednesday was cause for reflection, celebration, some sadness — and not a single mention by two of the largest purveyors of NFL information of his role in a murder trial.

As of 3 p.m. ET, the NFL's home page had links to 10 different stories or interviews about Lewis. Not one mentioned his role in a murder trial in 2000. ESPN's archives have stories on the trial and reflections on Lewis' character, but neither the current home page nor the NFL front mentions the stabbing deaths outside a nightclub in Atlanta, hours after the city hosted Super Bowl XXXIV.

I filed a 45-second "spot" report for NPR's Newscast earlier Wednesday; here it is in its entirety:

"Ray Lewis delivered big hits and powerful pregame speeches for 17 years for the Baltimore Ravens. He was the NFL Defensive Player of the Year twice, a Super Bowl MVP, and was named to the NFL's All Decade team for the years 2000 through 2010. Lewis pled guilty to a misdemeanor charge of obstructing justice in connection to the stabbing deaths of two men in 2000."

"The two men accused of the killings were acquitted at trial. Since then Lewis has rehabbed his image to the point where his services as football commentator will be in high demand upon his retirement, which could come as soon as this Sunday when the Ravens host the Colts in an AFC wildcard game."

The reason I mentioned a misdemeanor charge from almost 13 years ago is that it's necessary when considering the entire legacy of Ray Lewis.

I don't have any evidence to refute Lewis' own assertion that he saw no one being stabbed and had acted only as a peacemaker. However, I do know that if I were attempting to tell "The Ray Lewis Story" to, say, a friend from England who likes sports in general but didn't know of Lewis specifically, I would have to mention at least some details of the murder trial.

NFL.com currently links to two separate stories that purport to tackle Lewis' legacy. In the video "A Football Life: Ray Lewis giving back," a purple-clad woman attending what looks like a Lewis autograph session gushes, "Your mom raised a great person. I'm telling both my sons I want them to be just like you!" 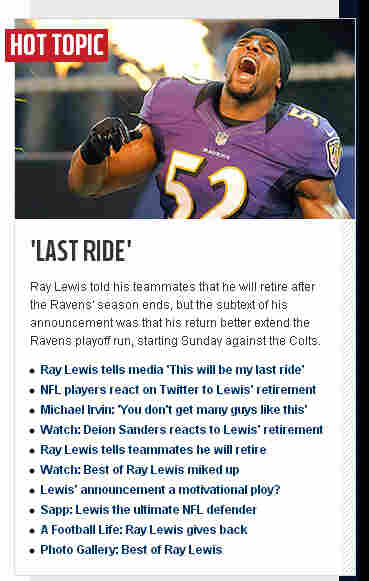 There is no mention of the murder trial anywhere in the six-minute video, nor are any off-field activities mentioned in a shorter video, "Baltimore Ravens linebacker Ray Lewis' legacy."

The longer "giving back" video focuses on Lewis' charity work and ability to inspire. We see Lewis praying with an ailing Ravens fan and hugging a Purple Heart recipient. That soldier, Sgt. First Class Allen Wiseman, we are told, "routinely had gone into battle wearing his Ray Lewis jersey beneath his Army uniform."

The video is part of an hour-long documentary produced by the NFL Network, which does touch on the stabbing deaths of Jacinth Baker and Richard Lollar in 2000 — but only the short version is currently available on the NFL's site.

The murder trial needn't be dwelled upon or re-litigated. But I can't see how a fair-minded but uninformed viewer could consume the current version of Ray Lewis being put forward on NFL.com and come away with a complete picture of his legacy.

ESPN's coverage also neglects to mention the killings; in general, their coverage concentrates more on football issues, though one interview, titled "Ultimate Leader," features a retired opponent repeatedly calling him a "Leader of Men."

There is nothing wrong with any of these individual stories — it's just that when the NFL page of ESPN links to six takes on Lewis, many concerning his "legacy," you'd think that the salient fact that he was closely linked to a double homicide might be mentioned.

There's another reason why I'm glad I included the brief description of the events of 2000 in my news spot. If you do a Web search for "Ray Lewis" and "murder," you'll get numerous sites, some message boards and some opinion columns, filled with incorrect assertions, often making Lewis' actions out to be much worse than the official allegations asserted.

The facts are that Lewis was indicted, pleaded guilty to a misdemeanor charge and testified against the two men, who were eventually found not guilty. He may also be a redeemed soul — and without a doubt he is one of the very few best defensive players in NFL history. Taken together, that is a more complete version of his legacy.