Accessibility links
Crazy Or Canny? Talk Grows About $1 Trillion Platinum Coin : The Two-Way In theory, some say, President Obama could have a $1 trillion coin made and that would head off the next big battle over the federal government's debt ceiling. 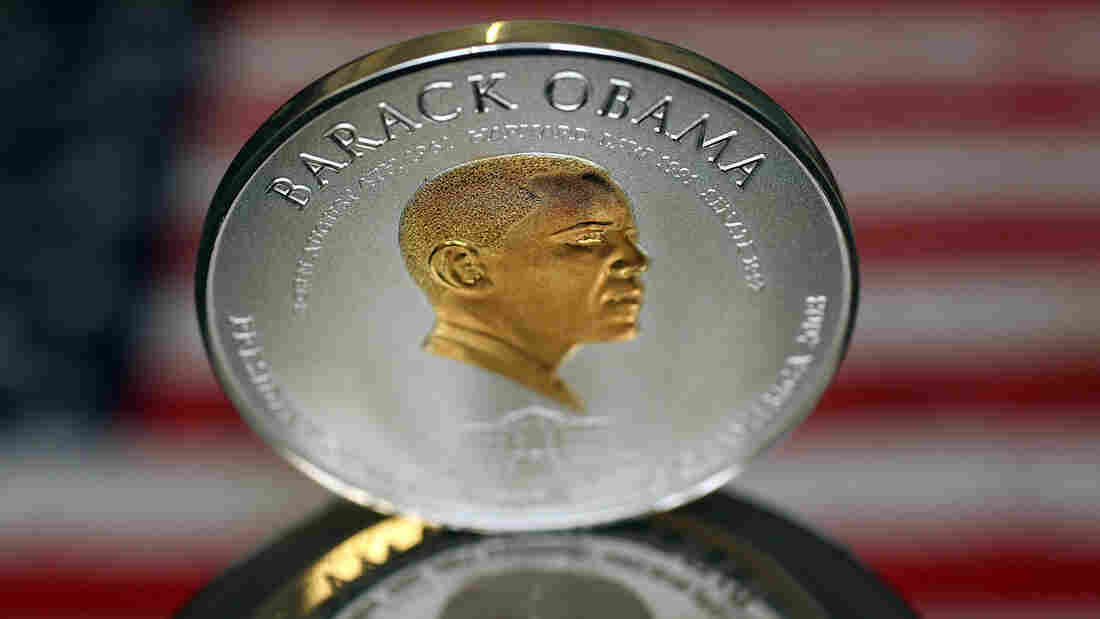 No, this isn't worth $1 trillion. It's a commemorative coin minted in the U.K. in 2008. But some have suggested the president's image should be on it if he orders up a $1 trillion coin. Christopher Furlong/Getty Images hide caption 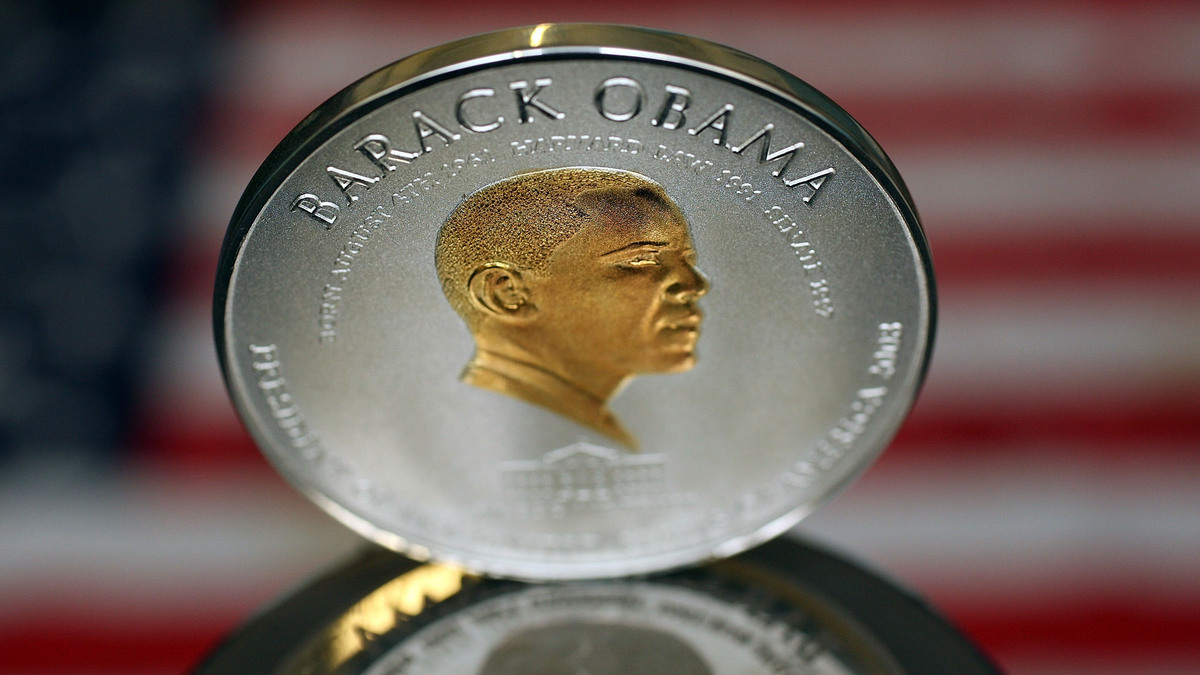 No, this isn't worth $1 trillion. It's a commemorative coin minted in the U.K. in 2008. But some have suggested the president's image should be on it if he orders up a $1 trillion coin.

We're pretty sure this won't happen.

You practically can't visit a news site these days without seeing a story about why President Obama should or should not order the Treasury Department to strike a platinum coin "worth" $1 trillion and deposit it with the Federal Reserve.

And why would Obama want to do that? Because, as we've said, the next big political battle in Washington comes in mid-February when the federal government again hits its "debt ceiling" and won't be able to borrow any more money. Republicans are saying they won't go along with an increase of the debt ceiling unless Democrats agree to some serious spending cuts. President Obama has said he's not going to go through another battle like the one in 2011 when much of the government almost had to shut down.

So, the idea has been raised of putting a $1 trillion coin in the Fed's vaults — which in theory, at least, would mean the government has more money available to borrow against and won't bump up against its debt ceiling.

New York Times columnist and Nobel Prize winner Paul Krugman is on board:

"Should President Obama be willing to print a $1 trillion platinum coin if Republicans try to force America into default? Yes, absolutely. He will, after all, be faced with a choice between two alternatives: one that's silly but benign, the other that's equally silly but both vile and disastrous. The decision should be obvious."

Washington Post columnist and Wonkblog economics editor Neil Irwin calls the idea "idiotic," but says "if there is no resolution of the debt ceiling through the legislative process, I hate some of the alternatives more."

At Forbes, though, columnist Maura Pennington reads such opinions and says "forgive me for hoping that the standard of behavior for adults was a little better than 'just don't be the most ridiculous person in attendance.' "

Wednesday at the White House, The Hill writes, spokesman Jay Carney "was asked repeatedly to clarify the White House's position on the platinum coin during his daily press briefing, but seemed to downplay — although not completely proscribe — the idea."

But is it remotely likely to happen? One of the Times' more conservative columinsts, Ross Douthat, thinks not:

"A White House that played the coin card in negotiations would be answering threats to sabotage the nation's credit with a threat to ... massively sabotage its own political position. And that sabotage would have inevitable consequences for the actual effectiveness of the coin maneuver in the event that the debt ceiling wasn't lifted: If Republicans were successful in portraying coin-minting as a Bond villain scheme rather than a legitimate policy move — and I really, really think they would be, no matter how the media covered it — then it's hard to see the markets maintaining any kind of equilibrium while the White House used a maneuver that even its apologists concede is 'usually a sign of severe distress' to cover the government's obligations."

By the way, why platinum? Because, as The Christian Science Monitor and others have pointed out, it's the one metal that Treasury can use to produce coins of any denomination. That's a legal loophole some lawmakers are trying to close.

And one more thing about a $1 trillion coin: Slate, which asked readers to offer potential designs, also debunks "the biggest myth about the platinum coin option" — that is, you don't actually need $1 trillion worth of platinum to make the coin. After all, "saying that the government would need a lot of platinum is like saying a $100 bill needs to have 100 times as much cotton in it as a $1 bill. Nobody would be able to fit them into their wallets."

Finally, we have to ask:

Note: It's probably obvious, but that's not a scientific survey of public opinion. It's just a question.

Business Insider has done both a story and a video to explain what this is all about. Later today, Business Insider deputy editor Joe Weisenthal is due to talk about the mythical coin on All Things Considered. Click here to find an NPR station that broadcasts or streams the show.