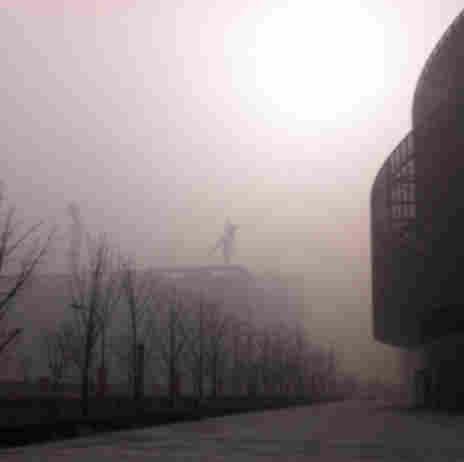 The air quality in Beijing registered at hazardous levels on Saturday, beyond the index used to chart it. Louisa Lim/NPR hide caption

"Beijing's skies are shrouded in a blanket of spectral grey smog, which blocks visibility and makes the eyes sting," Lim tells our Newscast Desk.

She says the air quality level is literally off the charts: The U.S. embassy's index stops at 500, but the levels recorded Saturday hit "beyond index," above 800. Lim adds:

"Public pressure has led to more open reporting of pollution levels in the last year, but one leading Chinese health expert has warned air pollution could become the country's biggest health threat."

In December 2011, Lim reported that long-time exposure to such hazardous pollution "could reduce life expectancy by as much as five years."

Officials say the extreme levels could stay that way into Tuesday. Meanwhile, the official Xinhua news agency reported as recently as Dec. 31 that Beijing's air has improved for 14 straight years.