Accessibility links
Obama: I Will Not Let Deficit Talks Be Tied To Another Debt Ceiling Debate : The Two-Way The president again laid down his position on what's expected to be the next bruising battle in Washington. He made the case that the borrowing limit has nothing to do with future spending. Republicans counter that there's no better time to debate spending.

Obama: I Will Not Let Deficit Talks Be Tied To Another Debt Ceiling Debate 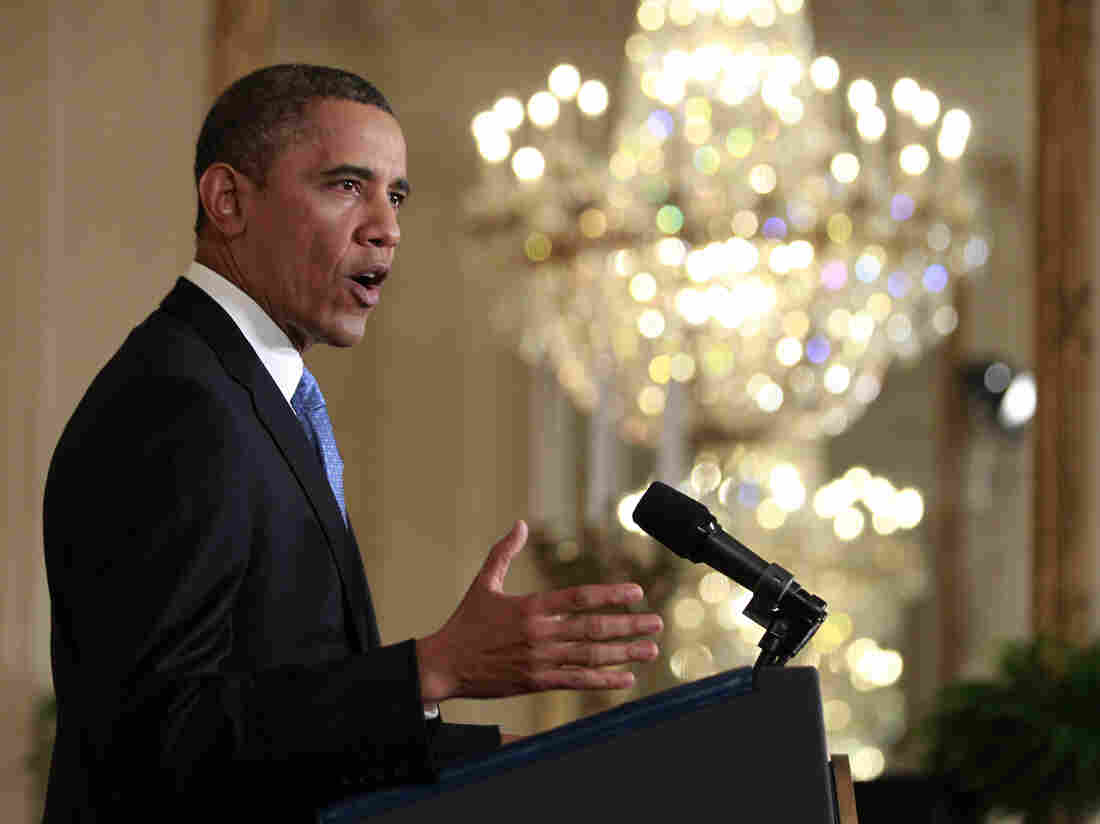 President Obama speaks during his news conference in the East Room of the White House on Monday. Jason Reed/Reuters/Landov hide caption 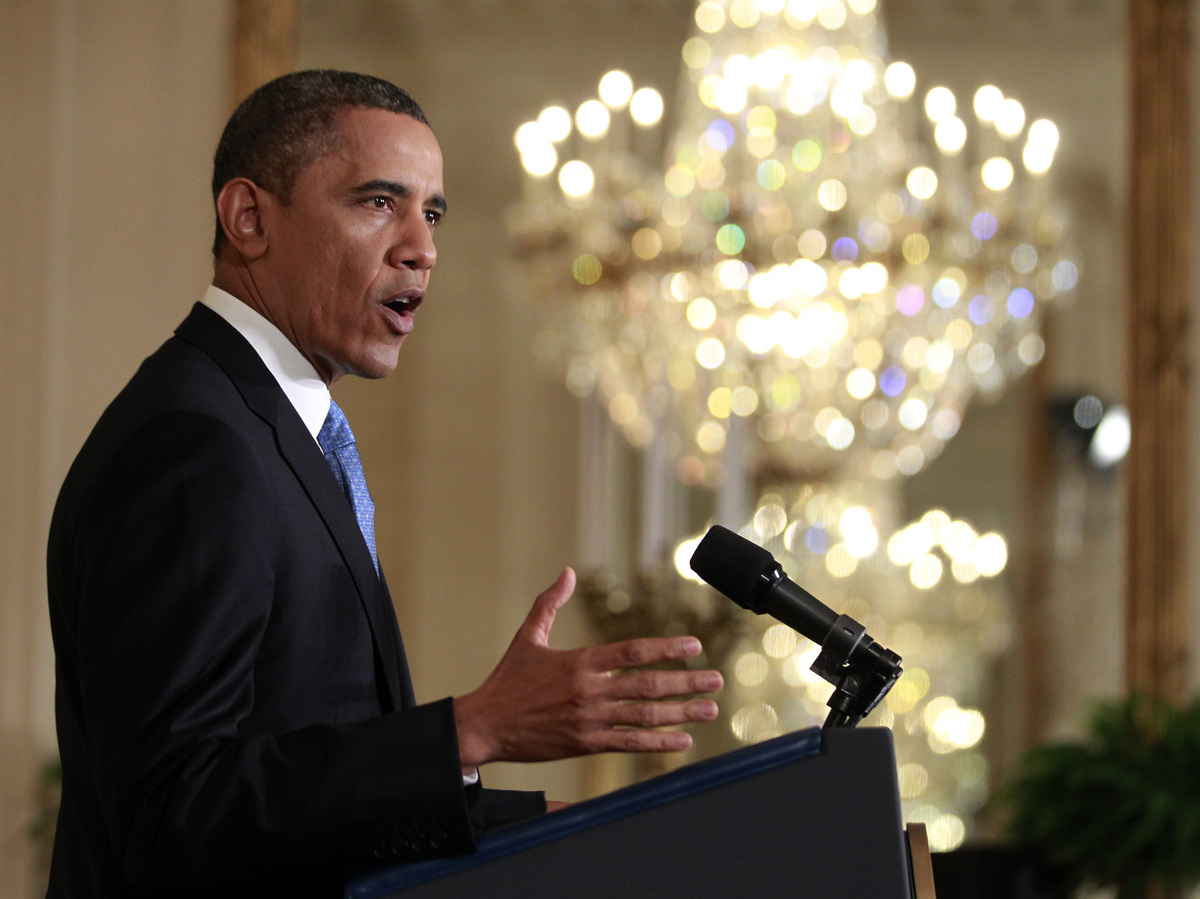 President Obama speaks during his news conference in the East Room of the White House on Monday.

At a news conference dominated by discussion of what's expected to be Washington's next big political battle, President Obama insisted Monday that he will not let Republicans tie an increase in the federal government's borrowing limit to negotiations over cuts in future federal spending.

He likened tying the debt limit debate and budget talks to holding "a gun to the head of the American people." Obama made the case that increasing the debt ceiling only lets the government pay its outstanding bills — and has nothing to do with future spending. You can't go out to dinner, "eat all you want and then leave without paying the check," he said at one point during a Q&A with reporters at the White House. Not increasing the borrowing authority, and thus forcing the government to default on some of its obligations, would be a blow the economy and to the nation's credibility, Obama said.

But the Republican leader in the Senate, Mitch McConnell of Kentucky, responded that "the president and his allies need to get serious about spending and the debt limit debate is the perfect time for it." House Speaker John Boehner, R-Ohio, issued a statement saying that "the consequences of failing to increase the debt ceiling are real, but so too are the consequences of allowing our spending problem to go unresolved. Without meaningful action, the debt will continue to act as an anchor on our economy, costing American jobs and endangering our children's future."

The government hits its debt ceiling again in mid-February. In 2011, a bruising battle over that limit almost forced a government shutdown and led to a downgrading of the nation's credit rating.

We'll live blogged as the president spoke (and put a new top on this post after the news conference was over). Among other issues that came up: gun control in the wake of the Dec. 14 school shooting in Newtown, Conn. On gun laws, the president said "my starting point is not to worry about the politics ... but what makes sense."

Scroll down and read "up" if you want to see how the news conference unfolded.

His first-term White House staff and Cabinet were "as diverse or more diverse" as any in history, Obama says. Now that he's nominated four white men to key positions in his second term, there's been talk that he isn't including women or minorities. "I would just suggest that everybody wait until they've seen all my appointments ... before they rush to judgment," Obama says.

Asked about criticism that he's aloof or not friendly enough toward Washington lawmakers, the president says, "I'm a pretty friendly guy and I like a good party." When members of both parties are invited to the White House, he says, "I enjoy their company."

With his daughters getting older, the president jokes, he may be a bit more lonely in coming years. So, he might be "calling around looking for somebody to play cards with" — including Republicans. But he expresses doubt about whether that would help get any of the big issues settled.

If Republicans do insist that the federal debt ceiling won't be increased unless Democrats agree to additional spending cuts, the president says, "I suspect the American people would blame all of Washington for not being able to get its act together."

But if that happens, he makes the case that it will be Republicans' fault. "Ultimately, Congress makes the decisions about whether we spend money and ... keep this government open," he says. And, "they have the votes in the House of Representatives" to potentially force a shutdown over the debt ceiling issue.

"My hope is that common sense prevails," Obama adds, as he again makes the case that increasing the debt ceiling only allows the government to pay bills that it has already incurred — not to increase future spending.

The nation has to "break the habit of negotiating through crisis, over and over again," the president says, as he again makes the case that talks about deficit reduction should not be tied to a debate over raising the federal borrowing limit.

Asked about the surge in gun sales since the Dec. 14 mass shooting at an elementary school in Newtown, Conn., the president says "we've seen for some time now that those who oppose any common sense gun control or gun safety measures have a pretty effective way of ginning up fear on the part of gun owners that somehow the federal government is going to take their guns away."

Such fears, he says, are unfounded.

Staying on the subject of what's expected to be another tough battle over raising the federal debt ceiling, the president says "what I will not do is have that negotiation with a gun to the American people" — referring to the possibility that the government might go into default or have to shutdown because his opponents won't approve an increase in that borrowing limit.

You can't go out to dinner, "eat all you want and then leave without paying the check," the president says, as he again argues that all increasing the debt ceiling does is let the government pay bills that Congress has already racked up.

Back on the issue of raising the federal debt ceiling, the president says "we are not a deadbeat nation." He's asked if he has a "plan B" should Congress not give him the authority to increase that borrowing limit. The president doesn't discuss such a scenario. He does, though, say he would welcome it if Congress stopped reserving the power to vote on raising the debt limit. Repeating that the limit only serves to give him the authority to pay bills that Congress has already racked up, Obama says: "if the House and Senate want to give me the authority so that they don't have to take these tough (debt ceiling) votes ... I'm happy to take it."

Asked if he will push for a ban on assault weapons such as the one used in last month's school shooting in Connecticut, Obama says "my starting point is not to worry about the politics ... but what makes sense." He mentions the need for "stronger background checks," an assault weapons ban that is "meaningful" and restrictions on or the banning of high-capacity gun magazines. Will such measures get through Congress? Obama says he does not know.

Update at 11:46 a.m. ET. Starting With The Economy, Taxes And Spending:

The nation is "poised for a good year ... if we make smart decisions and sound investments," the president says.

And, Obama says as he turns to a familiar argument, "we can't finish the job of deficit reduction through spending cuts alone."

The American people, he declares, "agree with me."

Republican leaders on Capitol Hill, however, have said the administration hasn't been serious about spending cuts and that they consider the debate about taxes to be over. Some want to tie negotiations over spending to raising the government's debt ceiling.

Turning to that upcoming debate about raising the debt ceiling, the president says that is not "a question of authorizing more spending. ... It simply allows the country to pay for spending that the Congress has already committed to. ... These are bills that have already been racked up."

It is "irresponsible" and "absurd," Obama says, for any lawmaker to talk of sending the government into default during another argument over the debt ceiling and spending.

The White House just said the news conference is now set to begin at 11:30 a.m. ET, not 11:15 a.m. ET it initially said. We've updated the top of this post to reflect that news.

The president, "plans to call on Congress to raise the debt limit" during his news conference, The Washington Post reports. It cites "a White House official" as its source. Obama has said several times recently that he will not go through another set of negotiations over the debt ceiling like those in 2011 when the federal government almost had to shut down and nearly went into default. But as NPR's John Ydstie said Saturday, "Republicans say they'll use the threat of default to get more spending cuts from the White House."

As we've said before, the government is due to hit its borrowing limit in mid-February. It's not going to try the much-discussed (but never really serious) $1 trillion platinum coin solution.