Accessibility links
UPDATE: 'Turmoil' For Many Parents As NYC School Bus Drivers Strike : The Two-Way The drivers want pay and job protections continued in their new contract. The city says a court order prevents it from doing that. Today, the familiar yellow buses are parked. Thousands of parents and their kids are finding other ways to get to school. 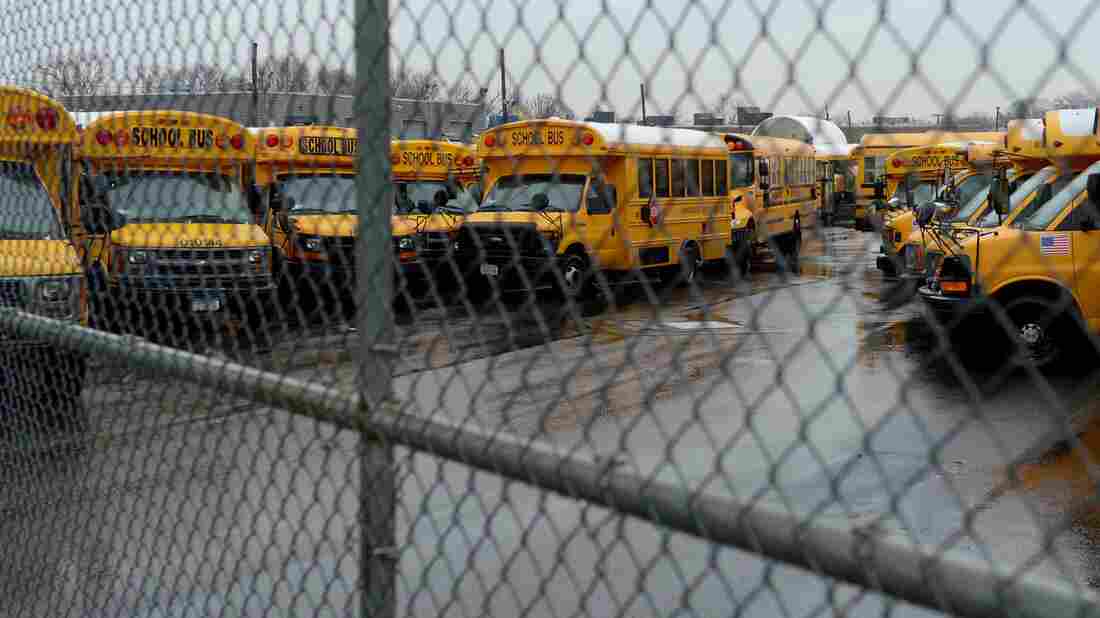 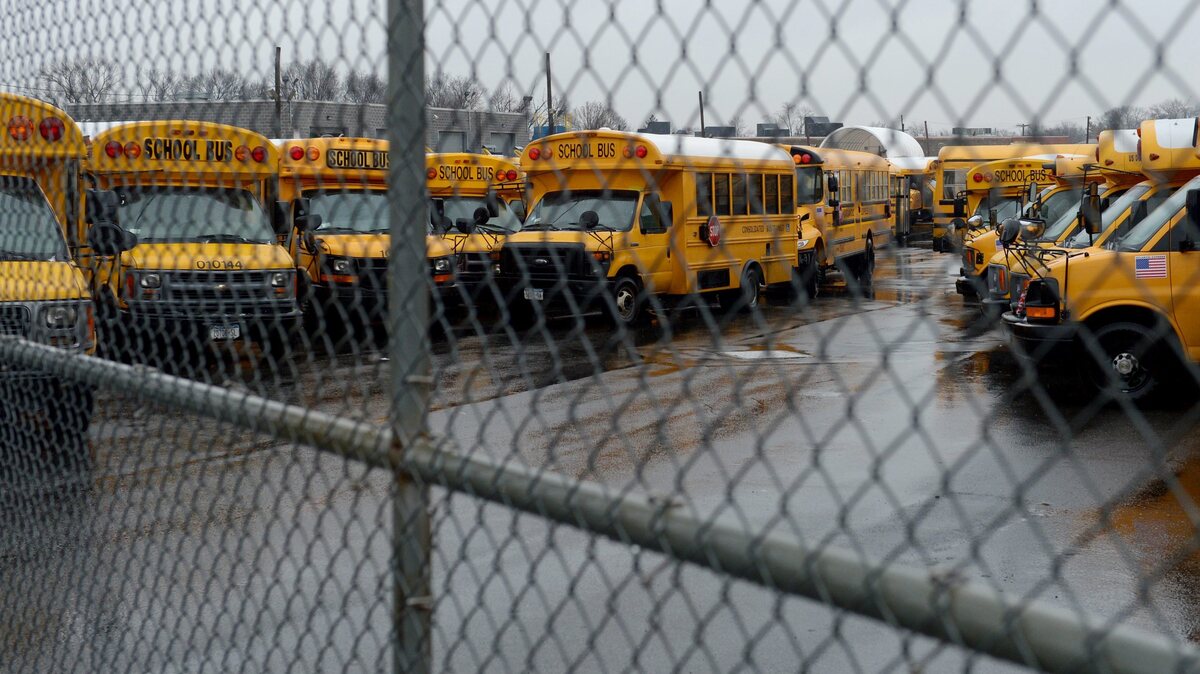 All locked up: School buses sat idle this morning in the Jamaica section of New York City.

It's been a rough morning for many parents and their children in New York City, where about 8,000 school bus drivers and monitors have gone on strike — meaning about 152,000 students had to get to school some other way.

"Across the city, parents hustled through the rain with children by their sides, with normal daily routines in turmoil and widespread concern about being late for their own jobs. ... Outside schools, cars bunched up and blocked the street at times as parents, navigating the drop-off of their children at school for the first time, jockeyed for space at the curb. The police were seen at several schools helping to keep traffic moving."

The New York Post looks at the problems facing one single mom. Tameka Carter has "four children who attend schools in different neighborhoods — from Downtown Brooklyn all the way across the borough to East New York — including three who receive door-to-door services because they have special needs." She may have to keep someone home.

"It's going to be chaotic," New York City school's Chancellor Dennis Walcott tells NY1 as his system and the city head into Day 1 of a strike by school bus drivers.

About 152,000 students, one third of them with special needs, rely on the yellow buses to get back and forth to school each day.

According to our colleagues at WNYC, the key issue in dispute is "the union's demand to include an employee protection provision in any new contracts the city signs with bus companies." It adds that:

"The city bid out the first batch of contracts, for pre-K bus routes, during the last school year. Those bids originally included the employee protections that currently guarantee Local 1181 workers the same pay if they're hired by different bus companies (drivers make between $14-$30 an hour, escorts make less).

"But a court found the protections are illegal. With that decision as precedent, the city argues that it cannot legally include the same protections in all other contracts, including the next batch that expire in June for 1,100 routes serving special education students in grades K-12."

Now, WNYC reports, "thousands of parents are scrambling to figure out how they will get their kids to school." The station's SchoolBook blog writes that:

"The [city's] Department of Education said it would distribute MetroCards at school, and will reimburse those who take a car service or taxi because their children cannot take public transportation. But there are about 152,000 children affected, one third of them with special needs. Getting one's child to school on time is complicated enough; without reliable school bus service many families told SchoolBook they will be at a loss come Wednesday morning."

According to The Associated Press, there are more than 8,000 bus drivers and matrons working for the bus companies the city hires. The city's school system has about 1.1 million students. Most take public transportation or walk to school.