Accessibility links
Manti Te'o Girlfriend Story Was A Hoax, Deadspin Says; Linebacker Says He Was Taken In (Updated) : The Two-Way Manti Te'o, who nearly won the Heisman Trophy, is at the center of what Deadspin calls a "hoax," in which the story of lost love was created to bolster his personal myth. The site is questioning the existence of a girl Te'o has said inspired him to new heights. He has not yet responded to the story; we'll update this post with any new information as it emerges.

Manti Te'o Girlfriend Story Was A Hoax; Linebacker Says He Was Taken In

Manti Te'o Girlfriend Story Was A Hoax; Linebacker Says He Was Taken In 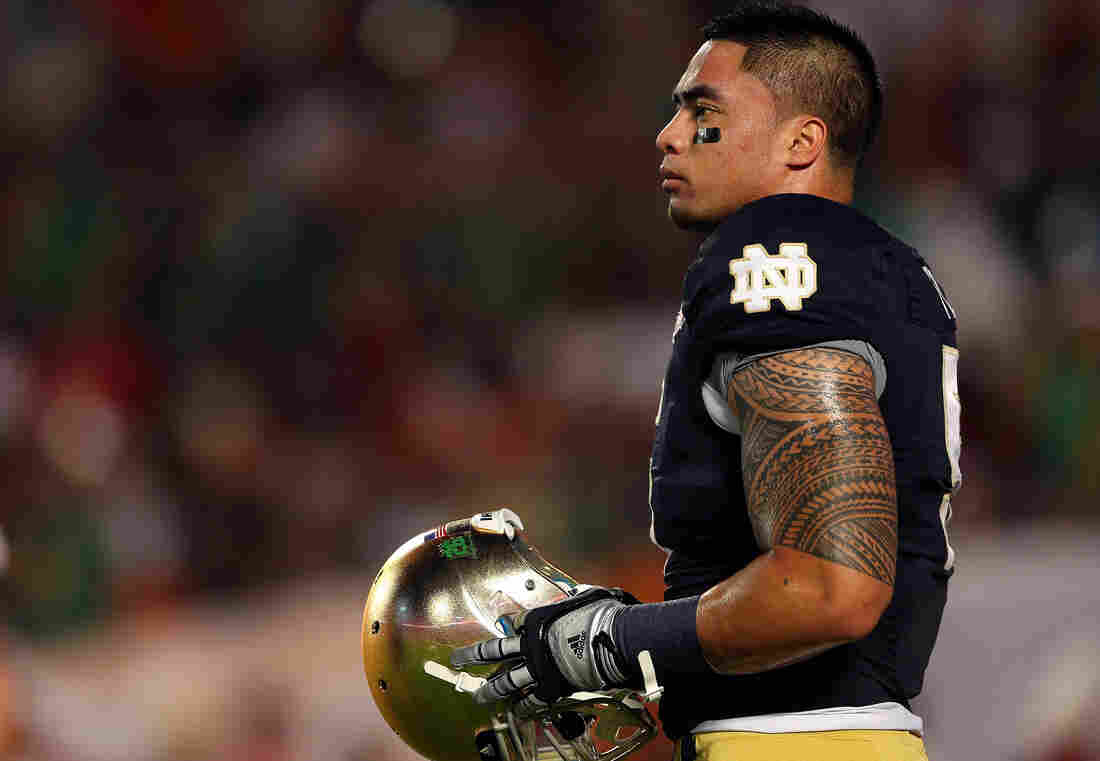 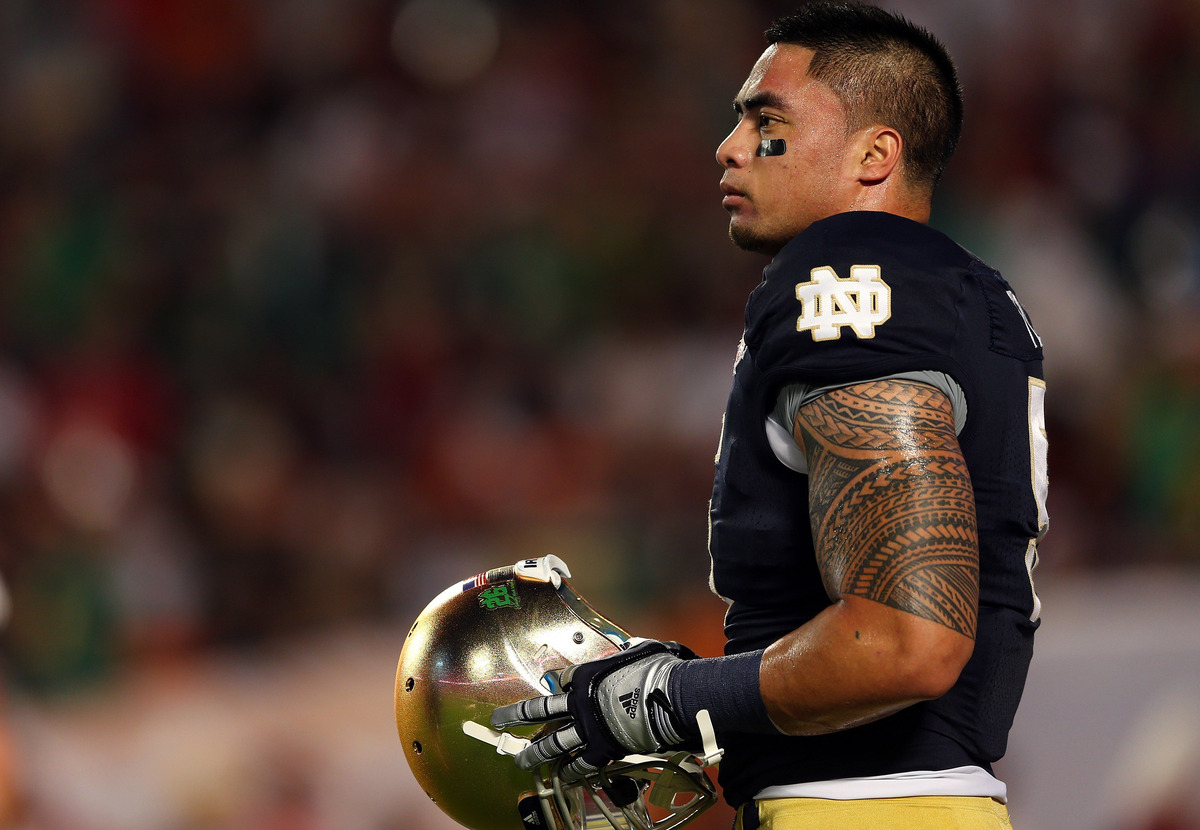 The sports website Deadspin says the story of Notre Dame linebacker Manti Te'o losing a girlfriend to leukemia is a hoax.

Manti Te'o, the Notre Dame linebacker who nearly won the Heisman Trophy this season, is at the center of what Deadspin reports is a "hoax," in which the story of a girlfriend — and her tragic death — was fabricated. The site is questioning the existence of a girl Te'o has said inspired him to new heights. We'll update this post with new information as it emerges.

"Swarbrick says an investigation by a firm the school hired has convinced him that Te'o was duped into an online relationship with a woman whose death was then faked by the perpetrators of the hoax."

"This is incredibly embarrassing to talk about, but over an extended period of time, I developed an emotional relationship with a woman I met online," Te'o says in a statement posted by ESPN. "We maintained what I thought to be an authentic relationship by communicating frequently online and on the phone, and I grew to care deeply about her."

Notre Dame's football coaches were informed about "what appears to be a hoax" on Dec. 26, university spokesman Dennis Brown said in a statement Wednesday afternoon. Brown says "the proper authorities will continue to investigate" what he says was "a sad and very cruel deception."

Te'o said that to "realize that I was the victim of what was apparently someone's sick joke and constant lies was, and is, painful and humiliating."

He concluded by thanking his friends, family and fans for their support, and recommending that people be cautious of engaging with people online. Te'o added that he will try to put the episode behind him and prepare for the NFL draft.

The revelations laid out by Deadspin's Timothy Burke and Jack Dickey seem to undermine what they call "the most heartbreaking and inspirational story of the college football season" — the story of how Te'o, a devout Mormon from Hawaii, suffered the tragedy of losing his girlfriend, Lennay Kekua, to leukemia, after she had been in a car accident.

The article has hit the world of college football like a bombshell, as it seems to irrevocably change the image of a player who had been embraced for his athletic talent, his personal charm and his story of overcoming a deep loss. The story was repeated by many media outlets, such as Sports Illustrated and CBS.

Burke and Dickey acknowledge certain truths about Te'o: that he is a fantastically talented football player; that he is devoted to his family; and that he lost his grandmother, Annette Santiago, 72, on Sept. 11, 2012. But they seek to undermine the oft-repeated tale of how Te'o was told of both Santiago's death and that of his girlfriend within six hours of one another.

In fact, they say that Lennay Kekua seems to have never existed.

The reporters say they ran searches via Nexis and the Social Security Administration to try to verify Kekua's death. Attempts to track her social media existence turned up only a few Twitter and Instagram accounts. And then there's the picture often used to portray Kekua.

"The photographs identified as Kekua — in online tributes and on TV news reports — are pictures from the social-media accounts of a 22-year-old California woman who is not named Lennay Kekua," according to Deadspin. "She is not a Stanford graduate; she has not been in a severe car accident; and she does not have leukemia. And she has never met Manti Te'o."

When they tracked down the woman they say is in the photo, Burke and Dickey say she was "initially confused, then horrified to find that she had become the face of a dead woman." They say she identified the photo as being part of her Facebook profile.

Other photos used on a Twitter account for "Lennay" included one the woman said wasn't on Facebook — but that she had sent it to an old high school friend. Burke and Dickey say that an old classmate of hers, Ronaiah Tuiasosopo, 22, may be the person behind the Lenney Kekua hoax.

To some, one question that remains is what level of involvement Manti Te'o had in the scheme or whether he might have been duped.

Deadspin reports, "A friend of Ronaiah Tuiasosopo told us he was '80 percent sure' that Manti Te'o was 'in on it,' and that the two perpetrated Lennay Kekua's death with publicity in mind."