Accessibility links
Massey Mine Boss Sentenced; Feds Toughen Mine Safety Rule : The Two-Way Nearly three years after a deadly mine explosion in West Virginia, a former Massey Energy mine superintendent has been sentenced to prison and federal regulators have toughened a regulation that could have helped prevent the disaster. 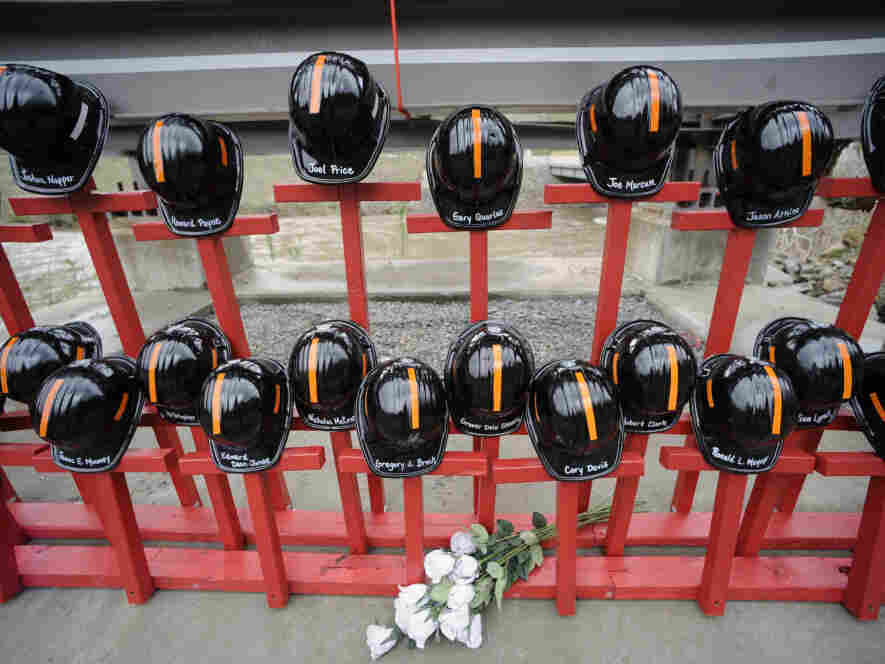 Mine helmets and painted crosses were placed at the entrance to Massey Energy's Upper Big Branch coal mine as a memorial to the 29 miners killed there. Jeff Gentner/AP hide caption 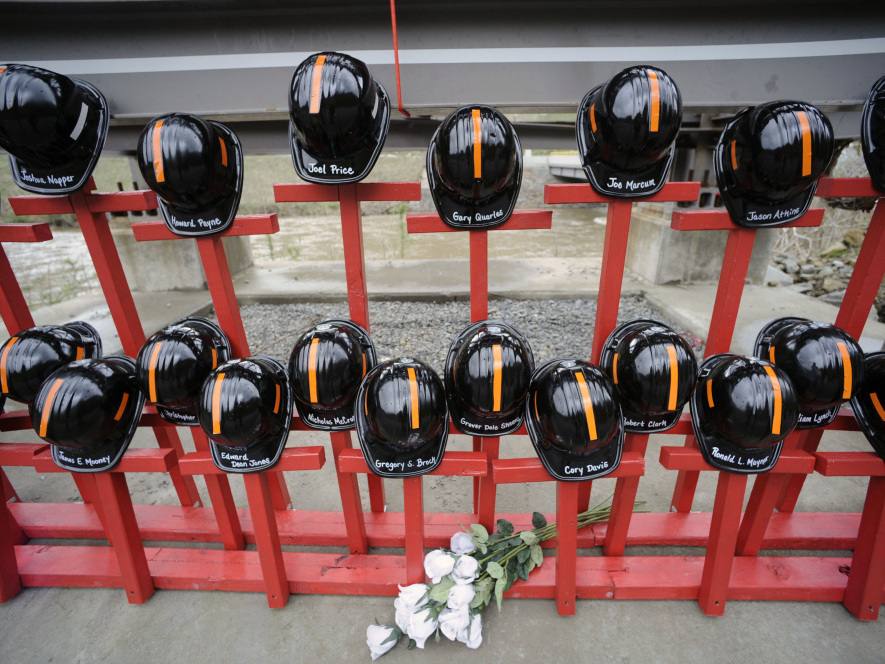 Mine helmets and painted crosses were placed at the entrance to Massey Energy's Upper Big Branch coal mine as a memorial to the 29 miners killed there.

Nearly three years after a deadly mine explosion in West Virginia, a former Massey Energy mine superintendent has been sentenced to prison and federal regulators have toughened a regulation that could have helped prevent the disaster.

Today in federal court in Beckley, W.Va., former Upper Big Branch coal mine superintendant Gary May was sentenced to 21 months in prison and ordered to pay a $20,000 fine.

The sentencing was part of a plea agreement in which May is cooperating with federal prosecutors as they continue to investigate the April, 2010, explosion that killed 29 coal miners at Massey's Upper Big Branch mine.

May pleaded guilty to one count of conspiracy and admitted to ordering a company electrician to disable a methane monitor on a mining machine so it could continue to cut coal without automatic shutdowns. The monitor is a safety device that senses explosive amounts of methane gas and automatically shuts down mining machines when dangerous levels of gas are present. The incident was first reported by NPR in July, 2010.

U.S. Attorney Booth Goodwin says the sentence sends "a powerful message to this mine manager and other mine managers who would put profits over safety: if you violate mine laws and put miners at risk you will go to jail."

Prosecutors indicate they're aiming higher up the corporate ladder, targeting former Massey managers and executives. David Hughart, a former president of a Massey mining subsidiary has also entered into a plea agreement.

Just as May's sentencing hearing concluded, the federal Mine Safety and Health Administration (MSHA) toughened and streamlined a regulation that had rarely been enforced and could have helped prevent the Upper Big Branch tragedy, according to disaster investigators.

MSHA calls it the "pattern of violations" rule and it's supposed to identify coal mines with serious, persistent and habitual safety violations and then target them for heightened scrutiny. But MSHA failed to enforce the rule in the first 33 years of its existence, in part because of a self-imposed and cumbersome regulatory step.

"It was clear after Upper Big Branch that some companies were violating lifesaving mine safety requirements over and over again," said Sen. Jay Rockefeller, D-W.Va., who has called for mine safety reforms.

Investigators concluded that the Upper Big Branch mine qualified for preliminary "pattern of violations" (POV) status before the April, 2010, explosion. But regulators failed to apply the rule, blaming a "computer glitch" that has never fully been explained.

The revised rule eliminates preliminary steps so that regulators will have a much easier time citing and sanctioning habitual violators of serious safety standards. The new rule also triggers automatic and immediate shutdowns of mining areas if serious and substantial violations are found in mines with POV status.

"We think that this final rule will help prevent another tragedy such as occurred at the Upper Big Branch Mine," says Joe Main, assistant secretary of labor for mine safety and health.

In a news conference this afternoon, Main added that "we have a better monitoring tool in place" since the computer error that kept the Upper Big Branch mine from receiving preliminary POV scrutiny before the April, 2010, explosion.

Main said that the mine's violations data were not entered into MSHA's computer tracking system. "I think we're doing a much better job of managing the system," he said.

New rule on a pattern of violations at a mine. by mmemmott

Rep. George Miller, D-Calif., the ranking minority member of the House Committee on Education and the Workforce, hailed the new rule. But he said more reforms are necessary to assure the safety of coal miners.

"It is Congress's responsibility to enact further commonsense reforms that will protect miners and incentivize mines owners to implement a culture of safety," Miller said.

Congress has not passed any mine safety reform measures since the Upper Big Branch explosion. Rockefeller has sponsored a Senate measure that aims to provide better protection for whistleblowers who report mine safety violations, better protect miners from the mine dust that causes black lung, and give MSHA more oversight authority, accountability and enforcement tools.