Accessibility links
Lance Armstrong Admits To Using Performance-Enhancing Drugs : The Two-Way In an interview with Oprah Winfrey, Lance Armstrong said that he blood doped or used banned substances in all of his seven Tour de France victories. He also said he didn't believe that it was possible to win seven titles without using drugs "in that culture." 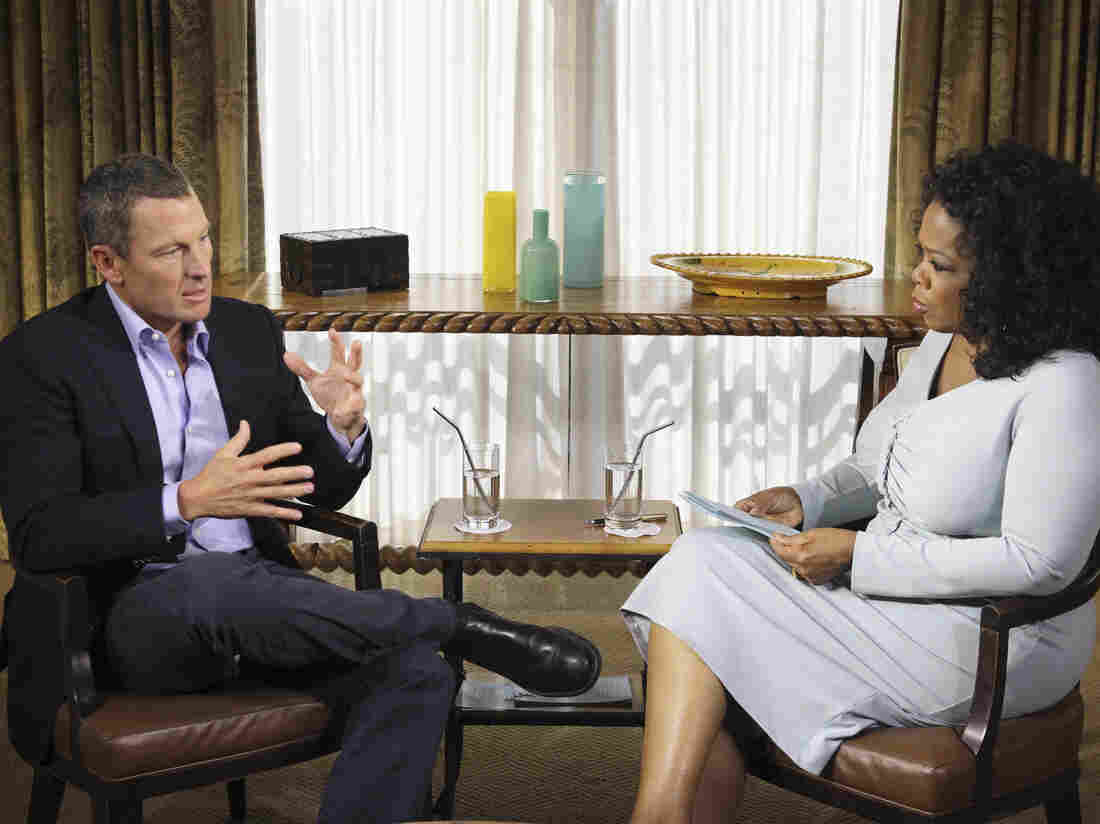 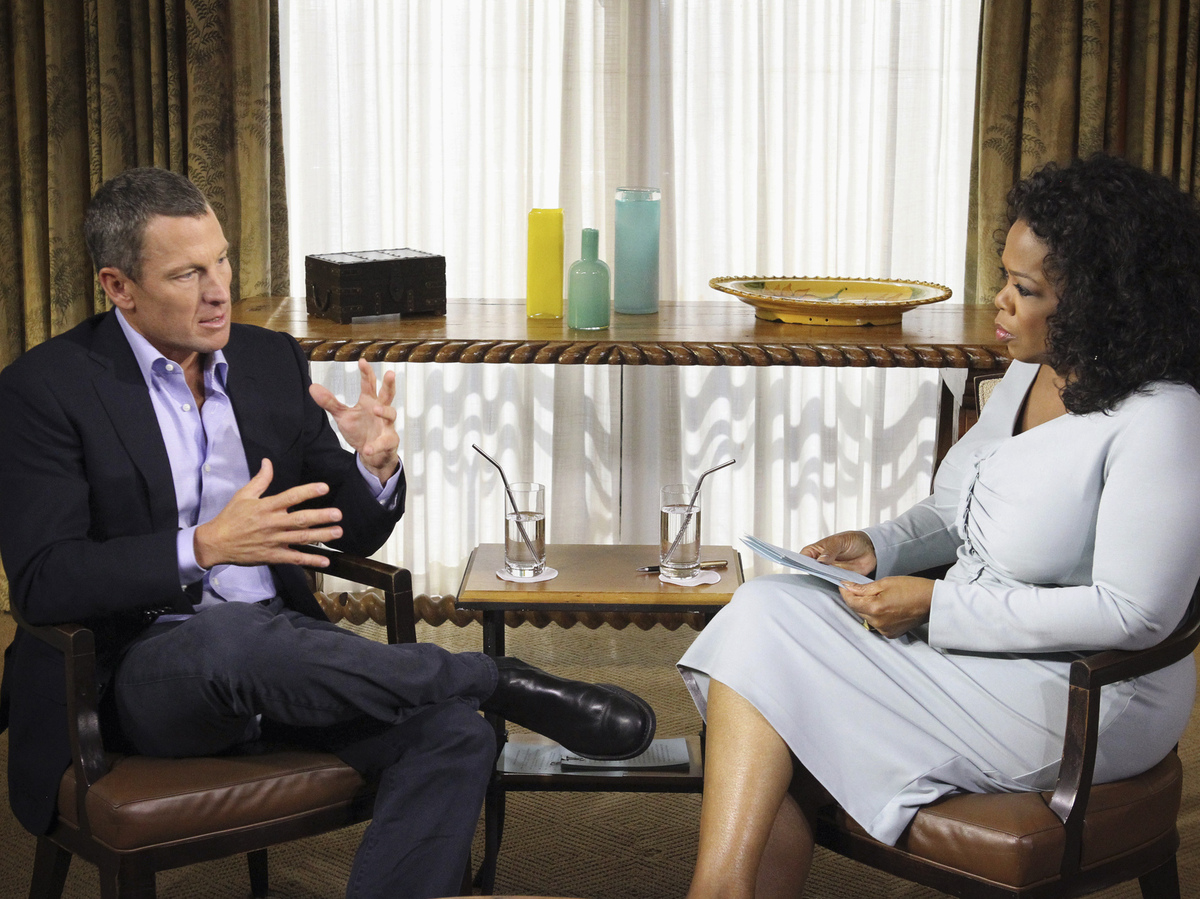 In an interview with Oprah Winfrey, the second part of which airs Friday, Armstrong said he was never afraid of getting caught and attributed his actions to a "ruthless desire to win."

Armstrong said that at no time did he feel his actions were wrong, but acknowledged that he would be spending the rest of his life "apologizing to people," including those whom he sued for alleging — correctly, as it turned out — that he was cheating on the Tour.

Armstrong also said that he believed his return to cycling in 2009 was part of the beginning of the end.

"We wouldn't be sitting here," he said, if he hadn't returned.

We posted updates during Armstrong's interview with Winfrey. Scroll down to see the highlights.

Armstrong says his "fate was sealed" when his friend and teammate George Hincapie testified against him.

"I don't fault George at all," he said, adding they remained friends.

When Winfrey asked him if he would now cooperate with USADA, that's the U.S. anti-doping agency, Armstrong said:

"I stand on no moral platform here ... but if there was a truth and reconciliation commission ... I'll be the first person in the door."

And that ends the first part of Oprah's interview with Armstrong. NPR's Greg Myre will be live-blogging the second part on Friday. Good night.

Teammate Floyd Landis' victory in the Tour de France, his subsequent positive drugs test and his admission on CBS of his own guilt — and of Armstrong's — may have been the beginning of the end for Armstrong.

But Armstrong also told Winfrey that he regrets coming back to cycling after his 2005 retirement: "We wouldn't be sitting here," he says, if he hadn't come back to the sport.

He says he assumed the news stories about his guilt would continue for a long time, but that didn't bother him. And, he says, when the Justice Department decided to drop the case against him, "I thought I was out of the woods."

Betsy Andreu, the wife of Armstrong's teammate, Frankie Andreu, told investigators in 2006 that Armstrong had admitted in 1996 that he had doped with EPO, growth hormone and steroids.

Armstrong not only rejected the allegations, but went after Andreu. He told Winfrey on Thursday that he had spoken to both Andreus and apologized.

When Winfrey asked whether they had made peace, he replied: "No. Because they've been hurt too badly and a 40-minute conversation is" not enough.

And while that may be technically correct at the time of victories, retroactive testing of his blood samples from 1999 came out EPO(+).

Armstrong also denied a story told by teammate Tyler Hamilton that Armstrong had failed the Tour de Suisse EPO test, and rejects the notion that his donation to the UCI was not meant to cover-up the results of the test.

"It was not in exchange" for a cover-up, he says.

Armstrong also apologized — including to his former masseuse Emma O'Reilly — for suing all those who had alleged, rightly it turned out, that he was taking drugs.

Winfrey asked Armstrong whether his actions felt wrong, or whether he felt bad or whether they even felt like cheating. His answer to each of those questions: "No."

"I viewed it as a level playing field," he said.

Armstrong said he was only recently aware of the magnitude of his actions and the impact they had on those around him.

"I see the anger in people," he said, adding: "They have every right to feel betrayed."

"I'll spend the rest of my life apologizing to people," he told Winfrey.

Armstrong says his "ruthless desire to win" made him cheat.

"The level that it went to was a flaw," he said.

When asked what fame did for his personality, he replied: "I was both" a jerk and a humanitarian. And, he added, "I am flawed. Deeply flawed."

But he conceded: "I deserve this."

Armstrong also refused to talk about the role played by others in the wider world of cycling.

Among them Dr. Michele Ferrari, the team physician who's been dubbed the Master of Doping, whom he called a "smart man" and a "good man."

"I tried to control the narrative," he said.

But he insisted that there was "never a direct order" that you have to take drugs to stay on the team. But he acknowledged, "I'm not the most believable guy in the world right now."

When Winfrey asked Armstrong if he was afraid of getting caught, he said, "No."

Armstrong explained that there wasn't "much out-of-competition testing" in the period when he amassed his seven titles, and so the prospects of getting caught were slim.

Well, we have the confession at the start of the interview. Winfrey asked Armstrong whether he used performance-enhancing drugs, EPO, indulged in blood-doping, used testosterone or HGH, and he replied "Yes" to all those questions.

He also said that he blood doped or used banned substances in all of his seven Tour de France victories. He also said he didn't believe that it was possible to win seven titles without using drugs "in that culture."

More as the interview progresses.

The big news from the interview, of course, is how Armstrong — who was stripped of his seven Tour de France titles — admits to using performance-enhancing drugs.

The interview is being broadcast on the Oprah Winfrey Network and also being live streamed on the network's website. The 90-minute interview starts at 9 p.m. EST. A second part airs Friday at 9 p.m. EST.

We'll be following along, so make sure you hit refresh so you're seeing the latest updates.

Here are some of NPR's recent stories on the Armstrong saga:

-- Up Next For Lance Armstrong: Post-Confession Court Cases

-- Lance Armstrong And The Cheapening Of Indignation

-- Lance Armstrong And The Business Of Doping