Accessibility links
'March For Life' Rally Draws Large Crowd In Washington : The Two-Way The annual march and rally gathers anti-abortion activists on the anniversary of the Supreme Court's Roe v. Wade decision that legalized abortion nationwide. It's now been 40 years since that decision was handed down. 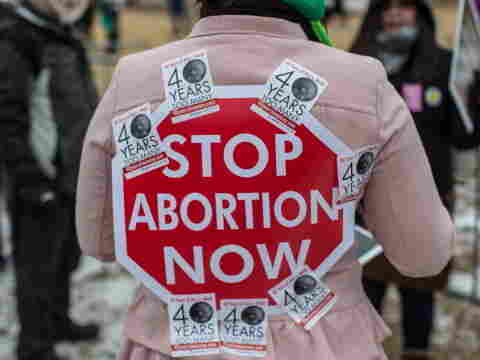 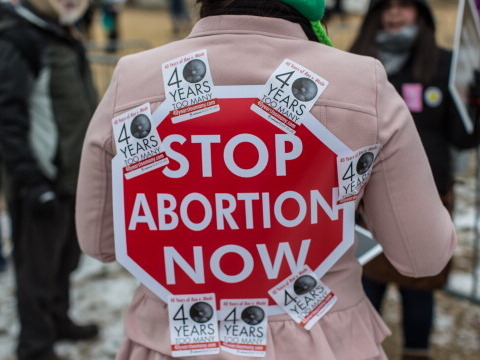 An anti-abortion activist at the March for Life rally Friday in Washington, D.C.

Organizers say today's March for Life rally in the nation's capital may bring more anti-abortion activists to the streets than last year's estimated 400,000. By midday, a large crowd was gathered in the National Mall, listening to speeches from former GOP presidential contender Rick Santorum and others and preparing to march toward the Capitol and the Supreme Court.

Streaming Video Of The March And Rally:

"We've seen lots of markers that would show that," Jeanne Monahan, president of the March for Life Education and Defense Fund, tells NBC Washington. "Our hotel block sold out a month in advance of what it's ever sold out, and we've had more media requests than ever before, so we expect really record-breaking crowds."

As Washington's WTOP reports, anti-abortion activists from across the nation are coming for the march that commemorates the 1973 Roe v. Wade Supreme Court decision that legalized abortion nationwide. The station adds that:

"The March for Life march is traditionally held on Jan. 22 — the anniversary of Roe v. Wade — but this year, the 57th presidential inauguration caused the National Park Service to schedule the march to occur on Jan. 25. ...

"On Friday morning, a youth rally is expected to host about 18,000 demonstrators in the Verizon Center, according to the Archdiocese of Washington. Groups will join the demonstration on the National Mall at noon for a second rally prior to the march. During this portion, marchers hear from speakers, congressional leaders and anti-abortion advocates. ...

"At about 1:30 p.m., the march departs, proceeding north on Constitution Avenue until it passes the Supreme Court on Capitol Hill, where the marchers disband."

PHOTOS: Scenes From The March For Life

We'll watch for news of the rally and follow up on it later today.

In the meantime, here's a related post from earlier this week in the Shots blog:

There have been gatherings of those who support abortion rights this week in Washington as well, including a candlelight vigil organized by the National Organization of Women on Tuesday in front of the Supreme Court.