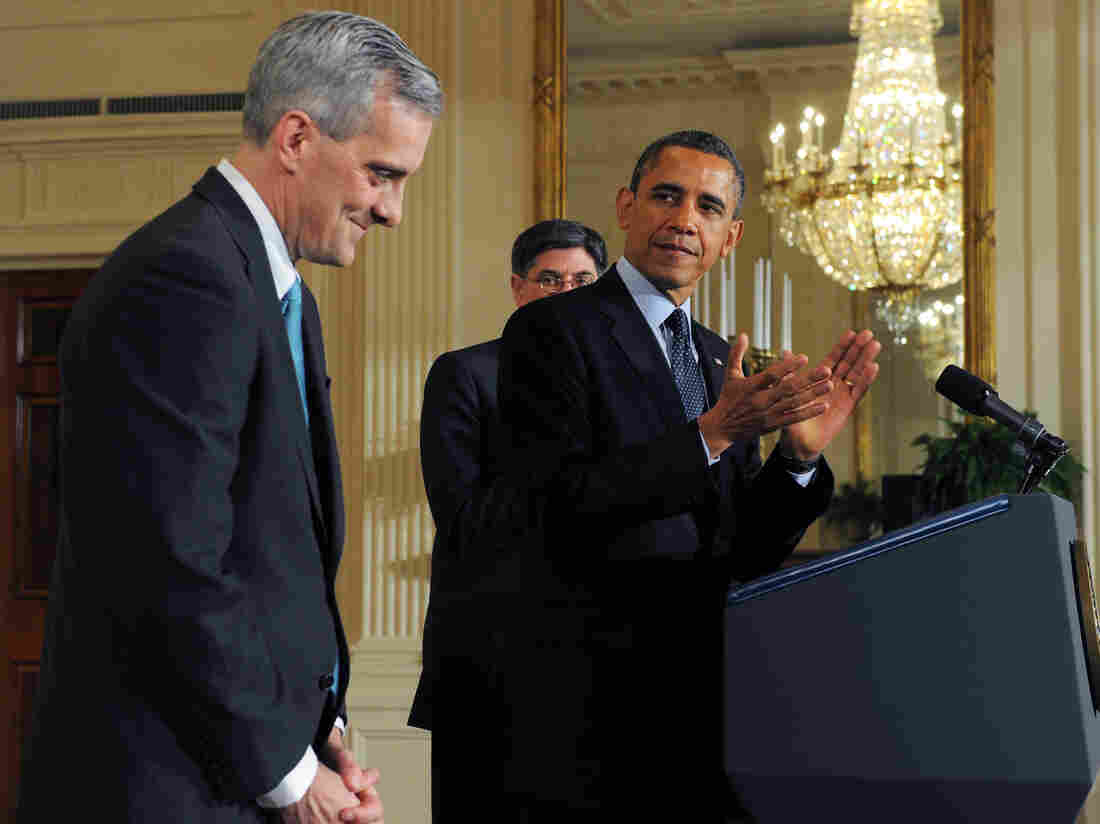 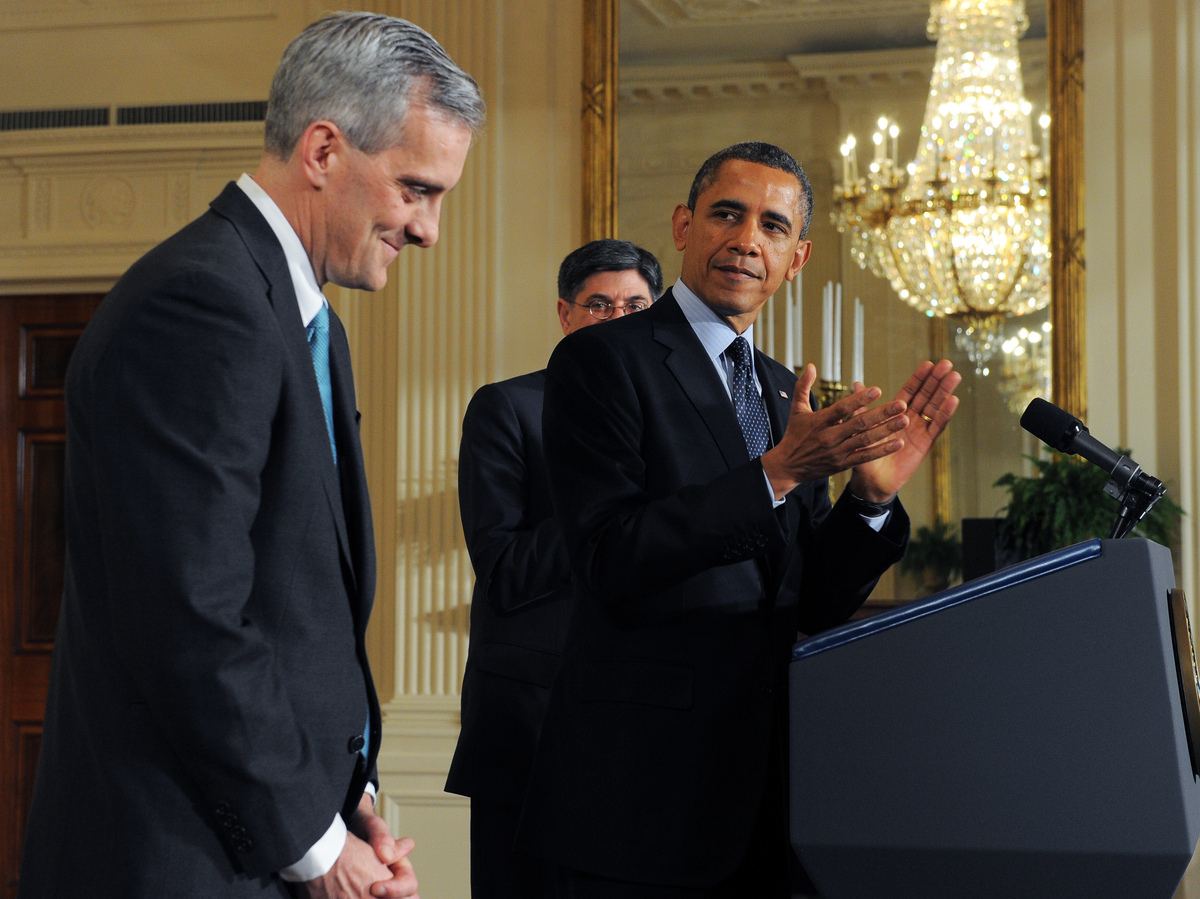 New White House Chief of Staff Denis McDonough (left), at Friday's announcement. Behind the president: outgoing Chief of Staff Jacob "Jack" Lew, who has been nominated to be Treasury secretary.

Saying he is choosing "one of my closest friends and one of my closest advisers" for the job, President Obama on Friday said that longtime aide Denis McDonough will be his next chief of staff.

During a midday event at the White House that was remarkable for the expansive comments the president made about his friend's character, his dedication and the respect he gets from those who work in the administration, Obama said McDonough has "the kind of heart that I want in the White House."

"Despite the unbelievable pressures" McDonough has faced as a top national security adviser, the president said, he is "the first to think about a colleague or to write a handwritten note. ... That's the spirit that I want in this White House."

The announcement was followed by lengthy applause from the White House staff. As we reported earlier, the move of McDonough into that post is one of a few personnel announcements Obama is making.

The president just made it official, saying he is "pleased to announce my next chief of staff ... a great friend to me and to everybody who works at the White House, Mr. Denis McDonough."

As we reported earlier, the move of McDonough into that post is one of a few personnel announcements Obama is making.

President Obama is moving longtime aide Denis McDonough into the chief of staff post that has opened up with the nomination of Jacob "Jack" Lew to be Treasury secretary, White House officials tell NPR and other news organizations. The formal announcement is scheduled for just after noon ET.

McDonough, as The New York Times writes, is currently a deputy national security adviser. His shift will be among several personnel announcements the president will make.

Among the other names that will come up is one that's familiar in law enforcement circles: Lisa Monaco.

Monaco, 44, is in line to become deputy national security adviser for Homeland Security and Counterterrorism. The post is contingent on the Senate confirmation of John Brennan as director of the Central Intelligence Agency.

Monaco is currently the leader of the Justice Department's National Security Division, where she oversees major counterterrorism and espionage cases and monitors threats to the nation's cyber infrastructure. 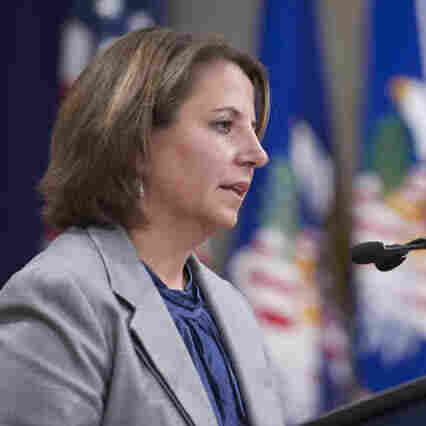 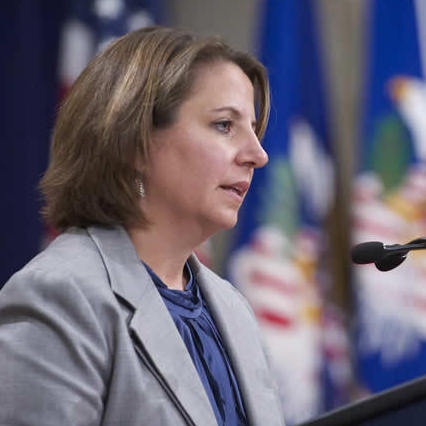 "For the last four years, Lisa has been one of my most trusted advisers on national security matters and I am thrilled by this announcement," Attorney General Eric H. Holder Jr. says in a statement about his aide's move to the White House. "Lisa has no rival when it comes to her dedication to this nation, her experience in national security issues and her excellent judgment. I know she will continue to serve this nation and this president with the same integrity and great skill she has demonstrated while at the Department of Justice."

Monaco started her career as a federal prosecutor in Washington, D.C., and eventually moved to the FBI, where she served as a top lawyer for director Robert S. Mueller III. Longtime friend Andrew Weissmann worked closely with Monaco on the Justice Department's Enron Task Force a decade ago, when they built criminal cases against executives at the disgraced Houston energy firm.

Weissmann, now general counsel of the FBI, says Monaco has what it takes to operate at the highest levels of the national security establishment. "Lisa is wise beyond her years," Weissmann said, "and notably, keeps her cool under fire. Those qualities will continue to serve her and our country well."

Monaco has earned a measure of bipartisan support. She has worked at Justice through three different presidential administrations: Bill Clinton, George W. Bush and Barack Obama.

Ken Wainstein, a White House homeland security adviser for President Bush, calls her a "devoted public servant." Wainstein himself made the transition from a job overseeing national security at Justice into the White House. And he says Monaco is ready for the move.

"The job requires a deep understanding of the interagency bureaucracy ... a strong background in the x's and o's of national security operations, and strong leadership ability — and I think she brings all that in abundance," Wainstein said.