Accessibility links
Feeling All Cooped Up In The Syrian Capital : The Two-Way Compared to the many war-ravaged parts of Syria, the capital Damascus is doing relatively well. But many families have taken in extra relatives and are feeling the psychological stress of too many people living under the same roof.

Feeling All Cooped Up In The Syrian Capital

Feeling All Cooped Up In The Syrian Capital 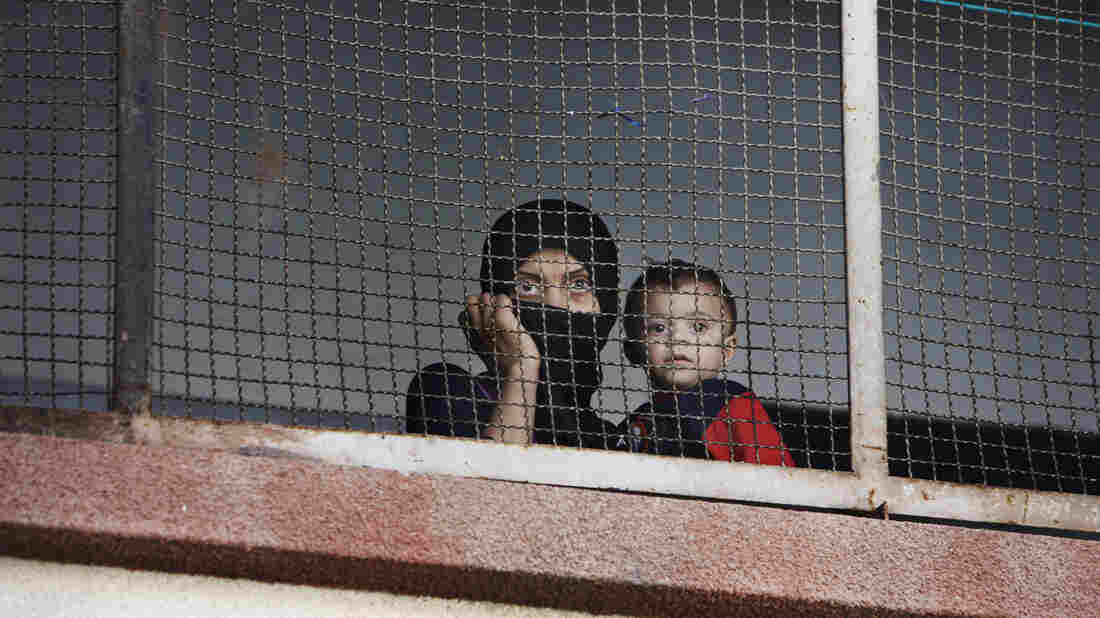 Many Syrians in the capital Damascus are feeling cooped up by the ongoing war. Here, a woman and her child who fled the fighting in their home area take refuge at a school in Damascus last September. Muzaffar Salman/AP hide caption 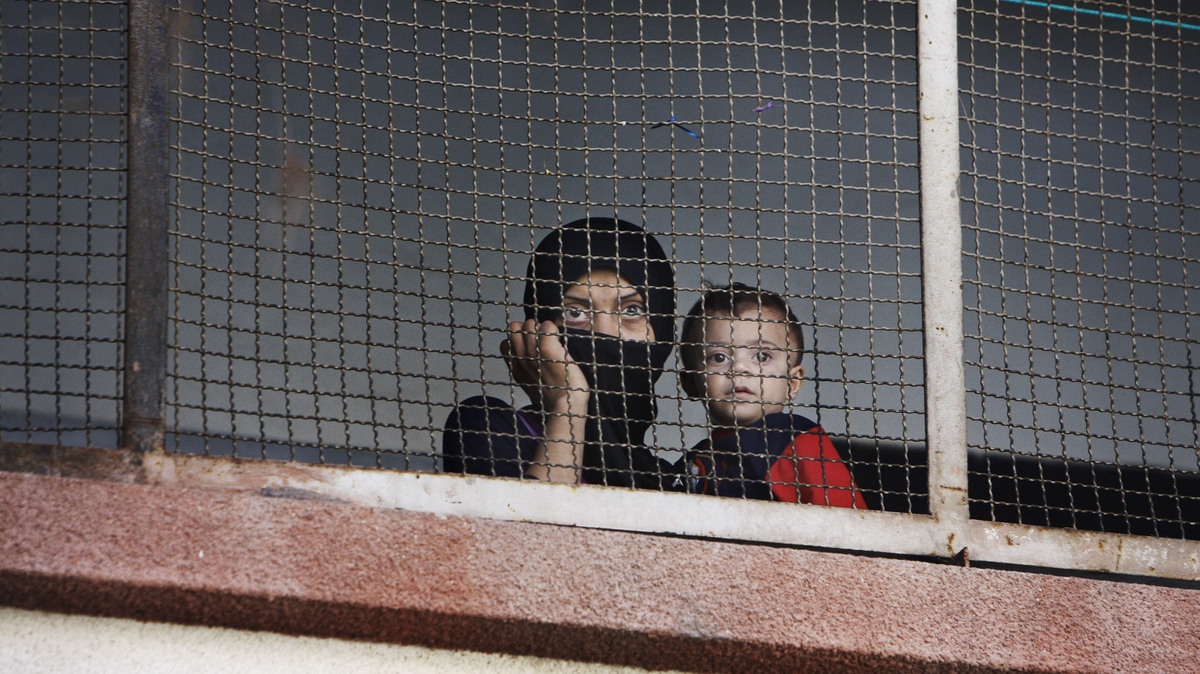 Many Syrians in the capital Damascus are feeling cooped up by the ongoing war. Here, a woman and her child who fled the fighting in their home area take refuge at a school in Damascus last September.

The author, a Syrian citizen, is not being identified due to safety concerns.

Rami is buff and athletic. For the past few years, he has supported himself and his wife working as a full-time personal trainer in the Syrian capital Damascus.

Now, he complains that his daily routine has been reduced to spending hours at home watching television.

"I end up watching the sultan's harem with my in-laws," he said, referring to a popular Turkish soap opera set in Ottoman times and dubbed into Arabic. "It's driving me crazy."

Rami's frustrations echo the general mood in Damascus these days.

Compared with many other parts of the country, Damascus is still doing relatively well. It has not endured all-out fighting. Most basic goods are available at stores and in the market. Outwardly, many people are trying to maintain a sense of normalcy. But in the nearly two years since the uprising began in Syria, everyone has felt the psychological impact of the war.

Last summer, Rami and his wife fled their home under gunfire from the restive suburb of Itseyya outside the capital. They joined the 2 million Syrians now internally displaced.

The young couple has since been splitting time between the homes of his parents and her parents. Both sets of parents live in central Damascus, where it is relatively calm.

Almost every Damascene household is doubled or tripled up in the same way, hosting loved ones displaced by the violence.

With so many families sharing cramped spaces, and no clear relief in sight, Damascenes are going nutty.

"I never have alone time, and everyone is up in my business. My sister the other day told me I put too much gel in my hair!" said Rami, who is 40. "I just really miss my own place." 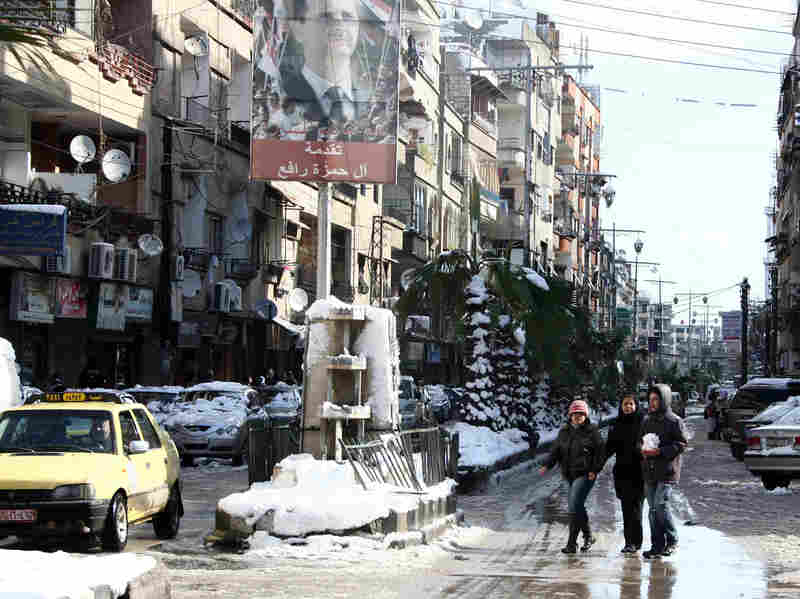 Damascus residents still get out during the day, but the streets empty at night. Here, Damascenes walk past a poster of President Bashar Assad on Jan. 10, following a heavy snow. Louai Beshara/AFP/Getty Images hide caption

Life in pro-regime central Damascus may be better than in the outskirts, where there are food shortages and frequent shelling attacks.

But in Damascus, power cuts and an ongoing heating oil shortage have turned life in this once vibrant city into something that resembles rustic camping.

At night, menacing checkpoints and the constant threat of random gunfire and kidnapping send Damascenes hurriedly home by sunset.

Watching television is probably the most common pastime these days. The most popular shows are Turkish soap operas, but every household also seems addicted to coverage of the war in Syria.

These choices can create tensions inside households, as individuals disagree on the politics.

To placate everyone, one couple hosting five relatives decided to purchase a second TV.

"We eat our meals together, and we don't talk politics," said the wife. "But come news time? We split up into two rooms, pro-regime and anti."

Falling Off The Health Kick

All this sitting at home has taken a toll on people's health habits. Rami complained that the few clients he still has have fallen off their health kick.

"Those who didn't smoke now do. And those who used to smoke a little now smoke a lot," he said.

He added that although he would never revert to smoking, he has put on some pounds.

He pulled out his iPhone and showed a dozen photos of hearty dishes that he made recently at home: baked spaghetti in hot sauce with hard-boiled eggs and sausage on top; potatoes and ground beef simmered in cream sauce.

In other homes, the extra mouths to feed put great pressure on the women in particular.

One homemaker, now hosting two sons and their wives and small children, is feeling the strain.

"I can't keep up," she said. "My daughters-in-law help out, but having the men at home all the time is exhausting. All they do is eat!"

During power cuts — which are about six hours a day for the average household — some families have revived traditional games like backgammon and barjis, a centuries-old board game.

But these games may be too complex for children, and they fail to burn off restless energy.

Ahmad, 11, is the youngest of five siblings. He and his parents were recently displaced. His mother laments that he misses all of his friends and has no one to play with.

"He's constantly punching and kicking the air, as if fighting an invisible battle," she said, half amused. "I'd play with him, but he's gotten so big I can't endure his physical energy."

Hafizah, an independent elderly woman in her mid-90s, recently received her displaced daughter and two great-granddaughters.

They now share Hafiza's cozy two-bedroom apartment building in downtown Damascus. The crammed quarters give rise to both offenses and amusements.

"She says her thoughts out loud and doesn't know we can hear her," complained one of the great-granddaughters, who is 16.

"Just earlier today, she asked me to shut the living room door to keep the heat in," the girl says. "And when I got up to do it, without realizing I could hear her, she called me a donkey."