Accessibility links
Dow Breaks 14,000 For First Time Since 2007 : The Two-Way The closing number marks the first time the stock market measure has broken that barrier at the end of the trading day since October 2007.

Trader Frederick Reimer works on the floor of the New York Stock Exchange on Friday.

Happy days are (or might be) here again: The Dow Jones industrial average closed above 14,000 Friday, marking the first time the stock market measure has broken that barrier at close since October 2007.

The average closed at 14,009.79. That's up more than 149 points, or about 1.1 percent for the day. The closing comes hours after the release of a new monthly unemployment report that indicated jobs grew at a faster rate late last year than previously estimated.

"The primary driver is not the 157,000 new jobs (created in January), but the positive revisions to the months of November and December," Darrell Cronk, regional chief investment officer at Wells Fargo Private Bank, told MarketWatch.com. 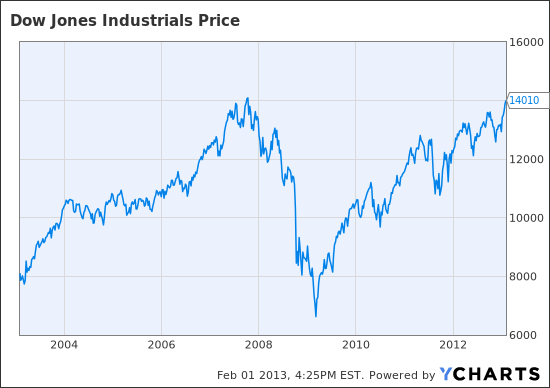 "Psychologically, it's a monumental number," Daniel Morgan, senior portfolio manager at Synovus Trust, told The Wall Street Journal. "It happened quicker than a lot of people thought it might, based on what's going on with the economy and the political climate."