Accessibility links
'It Could Be A Lot Worse,' Triumph Passenger Says; Cruise Ship Docking At Alabama Port [Updated] : The Two-Way Carnival says its cruise ship the Triumph will dock in Mobile, Ala., late Thursday night, as it has taken longer than expected to tow the stricken 100,000-ton ship across the Gulf of Mexico. The ship's 3,143 passengers have coped with sewage problems and a lack of ventilation, but a passenger says they've had plenty of food.

'It Could Be A Lot Worse,' Triumph Passenger Says; Cruise Ship Docking At Ala. Port

'It Could Be A Lot Worse,' Triumph Passenger Says; Cruise Ship Docking At Ala. Port 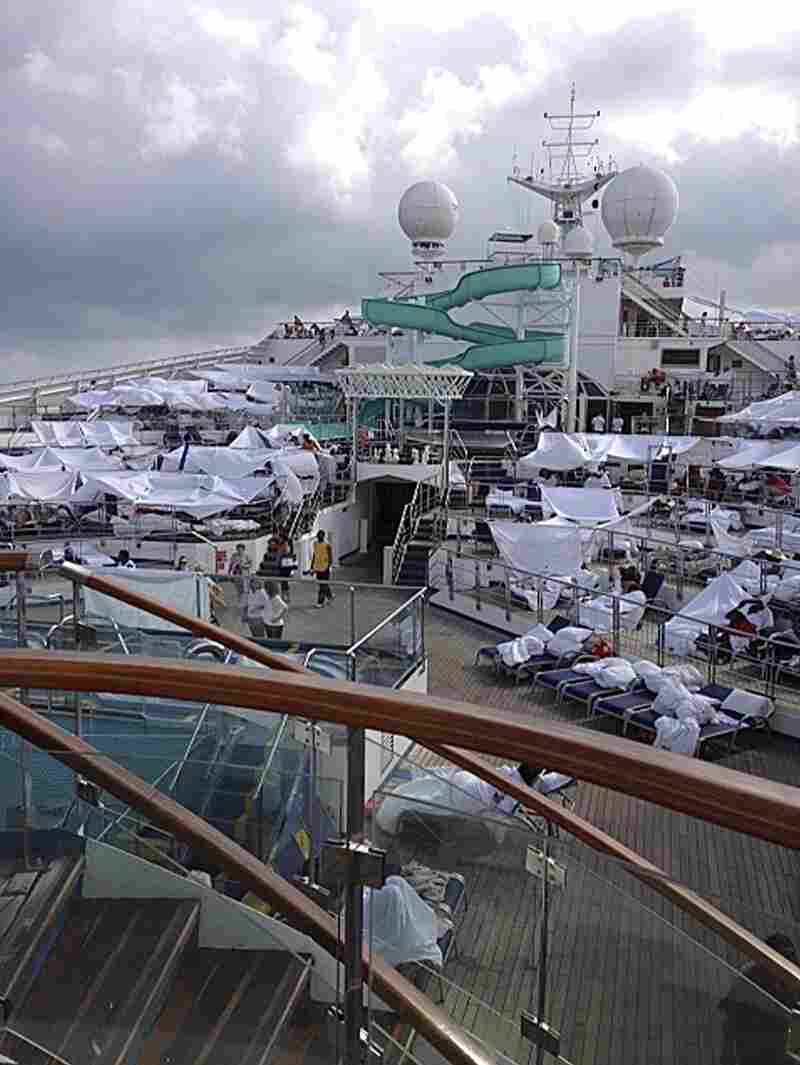 Makeshift tents are seen on the deck of the Carnival cruise ship Triumph, in a photo taken Sunday, the first day it spent without engine power. The image was provided by Kalin Hill of Houston. Kalin Hill/AP hide caption 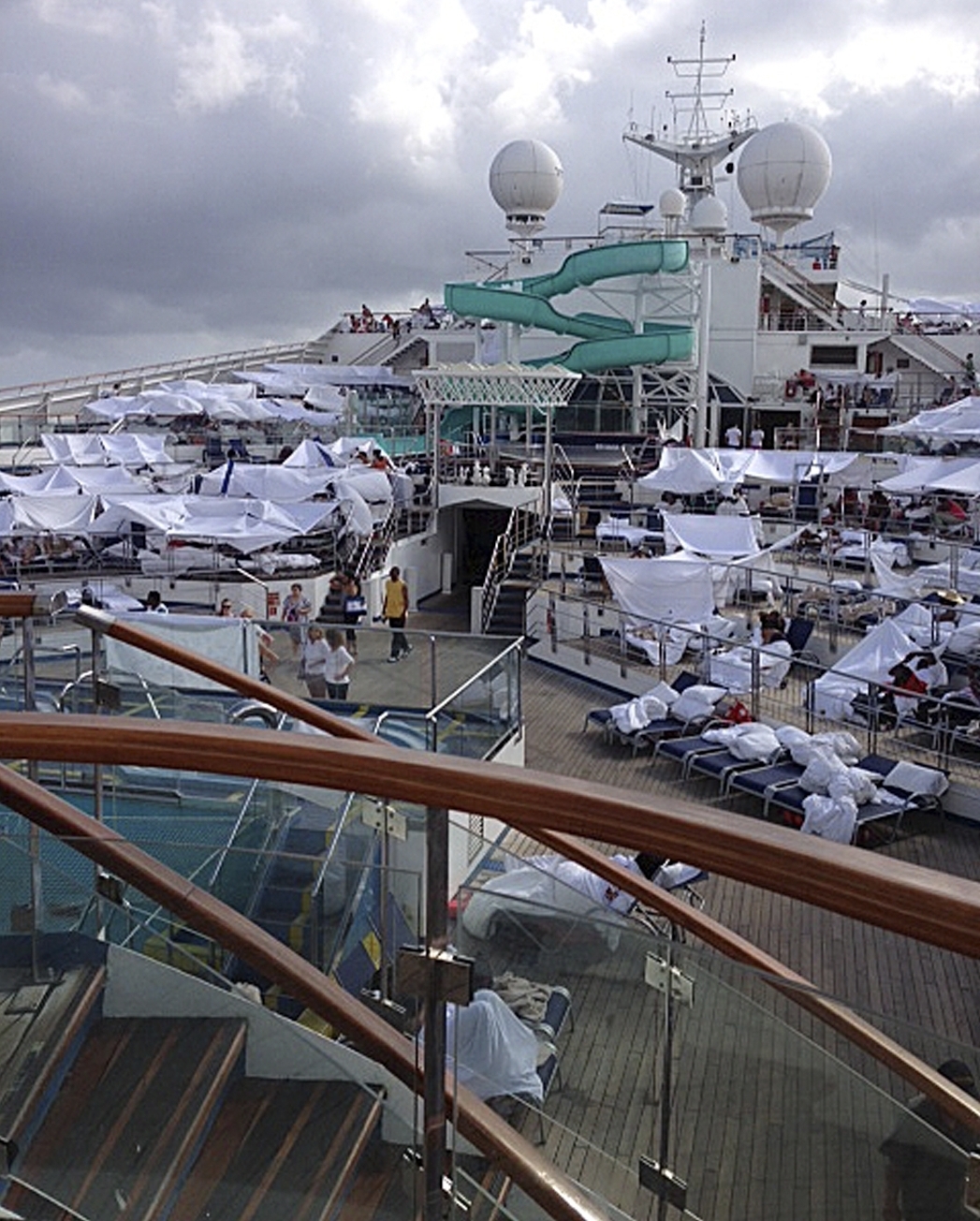 Makeshift tents are seen on the deck of the Carnival cruise ship Triumph, in a photo taken Sunday, the first day it spent without engine power. The image was provided by Kalin Hill of Houston.

The Carnival cruise ship Triumph docked in Mobile, Ala., late Thursday night, as the job of towing the stricken 100,000-ton ship hundreds of miles across the Gulf of Mexico took longer than expected. The ship's 3,143 passengers had coped with sewage problems and a lack of ventilation since Sunday, when the Triumph was crippled by an engine room fire.

A spokesman for Carnival says all passengers have left the cruise ship that was stranded for days without power and running water.

The first passengers are now beginning to get off the disabled cruise ship. It will take hours for all them to disembark from the Triumph.

In a news conference alongside the docking cruise ship, Carnival CEO Gerry Cahill apologized for the inconvenience to passengers aboard the Triumph.

He said the company prides itself on providing a great vacation experience, but "clearly we failed in this particular case."

He said he would board the ship to apologize to the passengers on board.

The Triumph is now docking at the port in Mobile, Ala., but passengers have to wait hours to disembark. 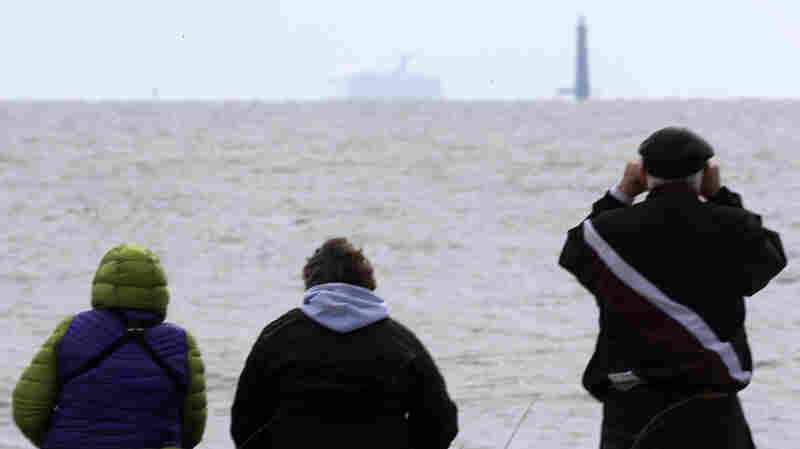 Spectators watch the Carnival cruise ship Triumph near Dauphin Island, Ala., Thursday, as the ship is towed to a terminal in Mobile. The Triumph is expected to arrive late Thursday night. Dave Martin/AP hide caption 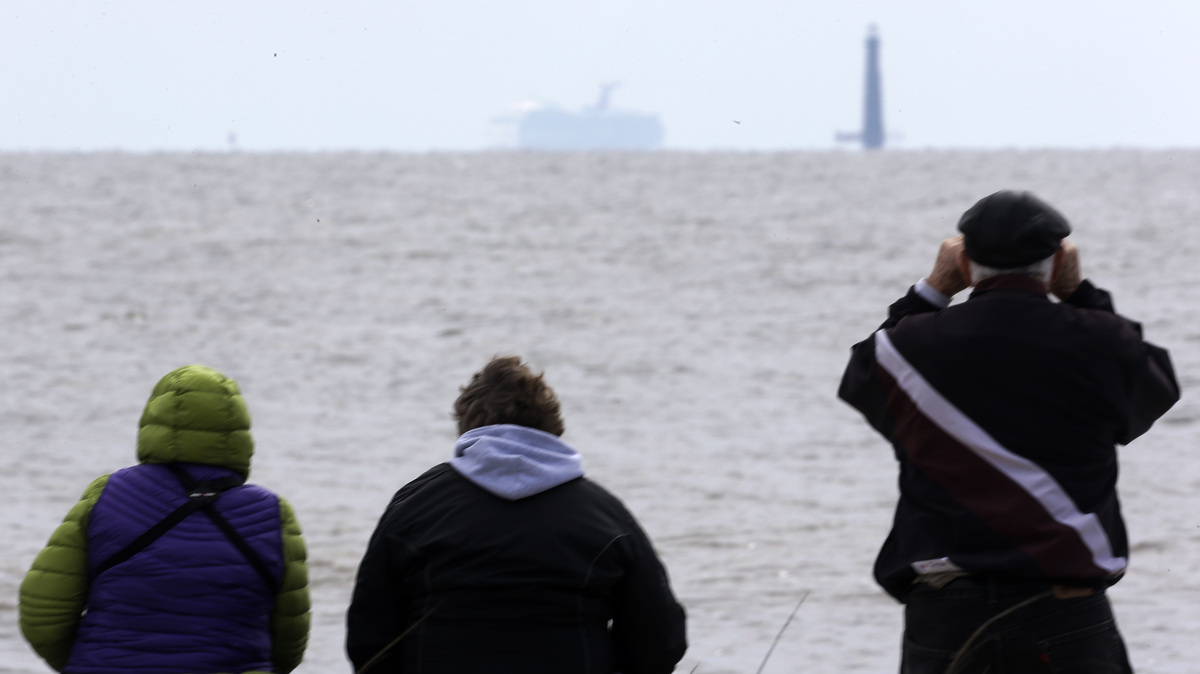 Spectators watch the Carnival cruise ship Triumph near Dauphin Island, Ala., Thursday, as the ship is towed to a terminal in Mobile. The Triumph is expected to arrive late Thursday night.

"The Triumph was pulling into port at about 9:15 p.m. Central time Thursday after taking about six grueling hours to be towed from the mouth of Mobile Bay some 30 miles to the port.

"Anxious passengers are lining the decks waving, cheering loudly and whistling to those on shore."

Carnival officials say the Triumph is 5 miles from the cruise terminal in Mobile, Ala. The ship is expected between 9:30 and 10:30 p.m. Central time.

Faced with possibly only one working elevator, it could take 4-5 hours for passengers to disembark, according to industry-watching site Cruise Ind. Carnival says that the Triumph will be the largest ship ever to dock at the Alabama Cruise Terminal in Mobile.

Carnival has announced that the Triumph will arrive between 10 p.m. and midnight ET. 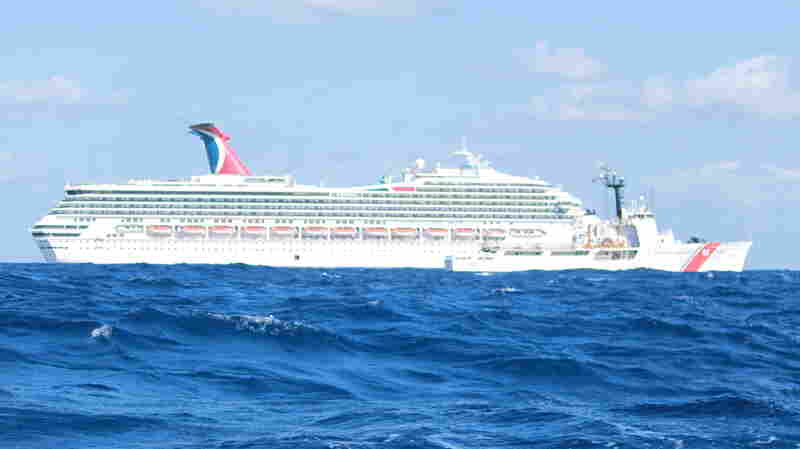 The Carnival cruise ship Triumph drifts in the Gulf of Mexico Monday, before the arrival of tugs that are now towing it to Mobile. The ship is expected to arrive Thursday night. U.S. Coast Guard hide caption

Cruise Critic reports that "the lead tugboat has been reattached" and the Triumph is now headed to the port, citing Carnival.

The Triumph's speed, which had been reported at 5 mph by the Coast Guard, has slowed to a snail's pace after one of four tugs pulling the ship reported a broken towline. "Petty Officer William Colclough says the ship will be 'dead in the water' as the tugboat with the broken line is replaced with a useable vessel," the AP reports.

The first sightings of the Triumph from Alabama's coast were reported around 12:30 p.m. ET. But that doesn't mean the journey is near its end. Off-shore conditions are slowing the ship, and it may also need to be turned or spun around, so that its gangplanks are on the proper side to disembark at the terminal.

"They originally told us 4 p.m., but due to wind and weather conditions, we didn't make it as far yesterday as they would have hoped," says Ben Vogelzang, a passenger on the ship. He spoke with NPR's Newscast unit around lunchtime Thursday.

Vogelzang says the Triumph's passengers are busy making travel arrangements to get them home after they finally arrive — a process that's been made more difficult by a lack of enough power or cellphone access. And they're getting periodic updates the way they have all week: via loudspeaker announcements, and pieces of paper slipped under cabin doors.

The Triumph's passengers have adapted to the lack of power and air conditioning that has left interior cabins dark, stuffy and hot, says Vogelzang, who's traveling with his girlfriend. Passengers are staying close to doors, he said, to catch any available breeze.

Still, he says, "I really don't have anything bad to say about the situation. It could be a lot worse."

Here are more details about life aboard the ship from Vogelzang:

"This has been pretty consistent throughout the time we've been on board is, we've had plenty of food, an amazing amount of food," he says, thanks to provision visits from other Carnival cruise ships.

"The conditions on board are pretty nice. I mean, we're still on a nice cruise ship. We have some power, some lights on board, especially in the common areas. They've been able to get some entertainment up for us, some musicians as well as comedians... It's been pretty pleasant, considering the situation. However, the real tough part is just having to be on the boat this whole time, and just keep waiting."

"The other hard part has been the toilet situation, which is probably the most uncomfortable. They've been able to get some toilets working, and some of them go out and then stop working. And different parts of the ship have been working at certain times. So, it's kind of difficult to find a working bathroom... that's kind of been the hardest situation on board."

"Pretty much everyone's sleeping in common areas. They've pulled their mattresses up from their rooms... like, where I'm sleeping, in the auditorium, in the theater. And other people are sleeping out on deck."

It's been a trying time on the ship, but Vogelzang says he's "not too upset" with Carnival.

"I know they're trying their best to get it all squared away for everyone that needs to. You can tell you're trying their hardest. I think most people onboard understand that," he says. "But I know there are a lot of people that are also very cranky about it, because they want to get home as soon as possible, and to have any more complication on top of this makes the situation even worse."

After arriving in Mobile, Vogelzang says his group will board a bus tonight. He's a little less certain about his travel plans in the distant future.

Vogelzang was part of the group that included passenger Rachel Alderete, 54, who was evacuated from the ship earlier this week so that she could receive dialysis treatments. Alderete, who described her trip to The New York Times, flew back home Wednesday.

"It was scary, I tell you," Alderete tells The Times. "It was horrible. I still have butterflies in my stomach."

"Pipes are busting, I know the sewer is backing up, and water is in the cabins, and it's just a nightmare," passenger Jamie Baker told NBC's TODAY show, in a phone interview from the ship.

Mirroring other reports from the ship, Baker said that while food has been available, there have been long lines. She also reported that people have used trash cans as toilets.

"Like Katrina in the Dome, except it's afloat," Baker tells TODAY.

The Carnival cruise line, which has previously stated it would refund nearly all expenses related to the cruise and give passengers a credit for a future voyage, has now said it will also pay each passenger $500. As of Wednesday afternoon, the Coast Guard reported the vessel was still 108 nautical miles south of Mobile.

"We know it has been a longer journey back than we anticipated at the beginning of the week under very challenging circumstances. We are very sorry for what our guests have had to endure," Carnival president Gerry Cahill said Wednesday. He added, "I look forward to welcoming everyone to Mobile tomorrow and have mobilized our full resources to assist and support them as they travel home."

This morning, the Triumph received 3,000 pounds of supplies from a Coast Guard MH-60 Jayhawk helicopter, a payload that included a generator and electrical cables. The ship has been operating under emergency generator power since Sunday's fire. It has also received food and other supplies from at least three other Carnival cruise ships.

But those efforts could do little to improve the Triumph's problems which have included a shortage of working toilets and hot food, as well as stiflingly hot interior cabins that have forced many passengers to sleep on the open upper decks, relying on improvised tents.

Passengers have been able to contact the mainland via texts and phone calls during resupply visits made by other ships. Tuesday, Cahill admitted that conditions on the Triumph are "challenging," saying that his cruise line is doing its best to keep them comfortable.

Carnival says it will have around 200 employees waiting to meet the Triumph and assist its passengers as they begin the journey home one week after they departed Galveston, Texas, on a four-day cruise. The cruise line is providing hotel rooms in New Orleans, and it has chartered flights out of Houston, Texas, to help passengers get back home.

Both of those options would mean hours-long bus rides — it's about two hours to New Orleans and seven to Houston. Passengers who drove will be taken back to Galveston.

In Mobile, officials are upset that their town is being bypassed in favor of New Orleans. While Cahill said earlier this week that the cruise line had booked 1,500 rooms in Mobile and New Orleans, Carnival now says all rooms are in New Orleans.

"Those poor people haven't showered in five days," Maura Garino, vice president of the Holiday Inn Downtown, tells The Houston Chronicle. "Who wants to get on a bus?"

The next 14 voyages of the Triumph have been cancelled. After the ship arrives tonight, a team of Coast Guard and National Transportation Safety Board will begin an investigation into the fire and the ship's response to it.