Accessibility links
Winter Storm 'Q' Barrels Through Nation's Midsection : The Two-Way The storm that has already dusted parts of New Mexico and Oklahoma is expected to move through the Midwest, dumping as much as a foot and a half of snow. 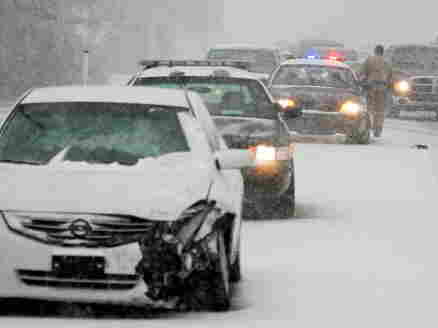 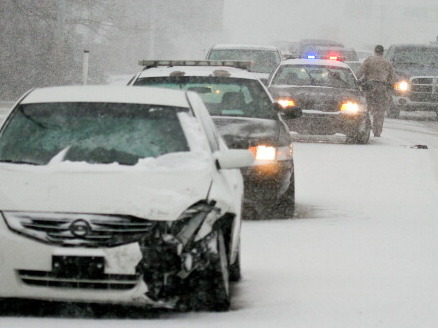 Missouri Gov. Jay Nixon has declared a state of emergency due to the heavy snowfall. The declaration allows state agencies to work directly with county and city emergency responders.

Jennifer Davidson of member station KSMU reports that about 40 people are staying at The Salvation Army in Springfield, which provides beds, blankets, and food for families in need.

Drivers in southern Missouri are seeing mostly sleet and freezing rain, while the northern part of the state is expected to see heavy snowfall, she says.

In Oklahoma, up to 12.5 inches of snow fell in northern parts of the state while schools were closed throughout the Oklahoma City area because of treacherous driving conditions.

Areas of southwest and central Nebraska received 8 inches of snow overnight, according to the National Weather Service. Snowfall of 3 to 4 inches was widespread in central Nebraska.

Winter Storm "Q," which has already dumped a layer of snow in Arizona, New Mexico and Southern California, moves with full force into the eastern Plains and Midwest on Thursday, where it could dump a foot and a half of snow in some areas.

In Kansas and Missouri, where forecasters are predicting the heaviest snowfall, flights at Kansas City International Airport has been temporarily shut down and several schools districts, as well as Kansas State University, have canceled classes.

Laura Ziegler, with member station KCUR, reports being stranded in the snow in her car in Johnson Co., Kansas.

She says there are cars stranded in the snow every 50 feet or so along her route.

"Snow plows around the area are even having a hard time getting onto the street," she says. "Even the public service employees were not prepared for the speed with which the snow is accumulating."

Ziegler says locals are calling the weather the worst snow in 20 years.

The National Weather Service has issued a Winter Storm Warning for most of Nebraska and Iowa, all of Kansas and nearly all of Missouri. Advisories are posted for parts of South Dakota, Minnesota, Illinois, Indiana, Ohio, Kentucky, West Virginia and Virginia, Colorado, New Mexico, Oklahoma, northern Texas and Arkansas.

Kelly Sugden, a National Weather Service meteorologist in Dodge City, Kan., told The Associated Press early Thursday that the storm was moving a bit slower than first expected, but was "starting to get back together."

The storm was mixing snow with lightning and sleet showers, Sudgen said.

"Sugden said that while forecasters weren't expecting blizzard conditions to develop in Kansas, the Interstate 70 corridor could get as much as 13 inches of snow, and large drifts would make driving very dangerous."

USA Today, quoting weather officials, says it could be the worst winter storm in the central U.S. since the Groundhog Day blizzard in 2011, which killed dozens of people and left thousands without power.

Road crews across the Plains states and the Rockies have been working to stay ahead of the snowfall, which has been blamed for one traffic-related death so far — in Oklahoma.