Accessibility links
South Korea's New Leader Aims For Middle Path In Relations With North : The Two-Way Park Geun-hye, daughter of the late dictator Park Chung-hee, faces an uphill battle in her efforts to forge a new relationship with Pyongyang. 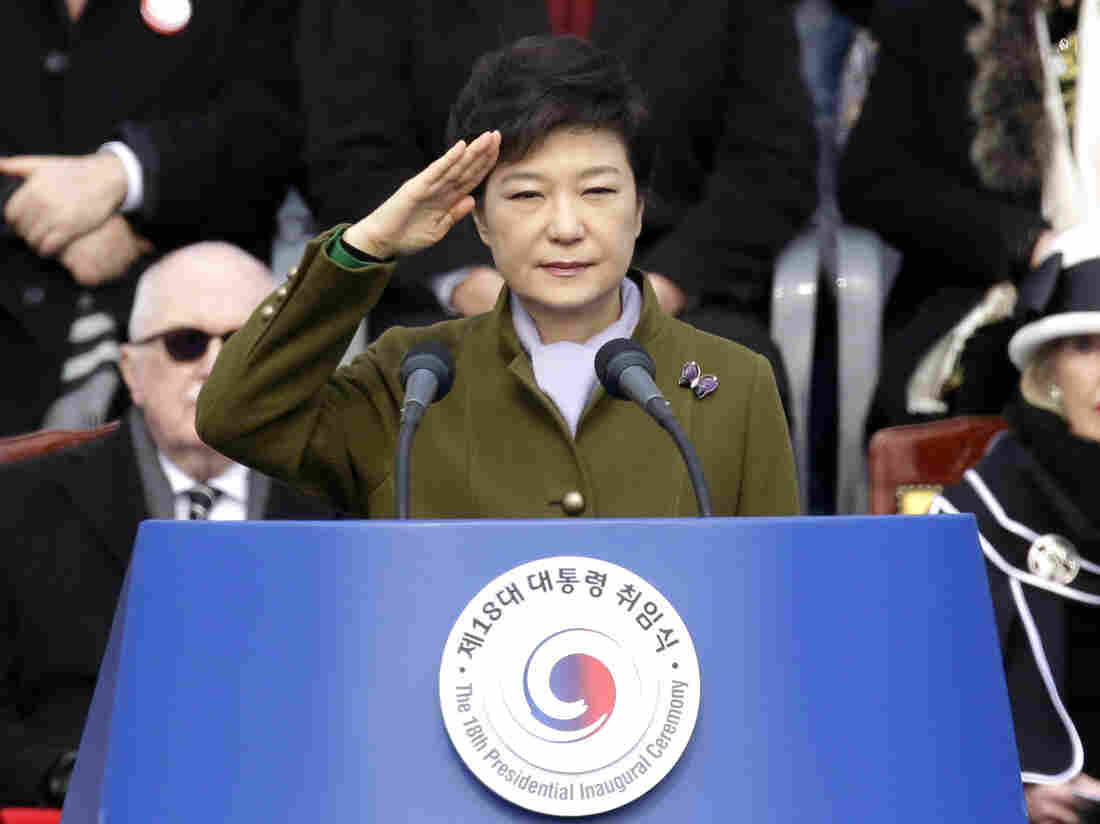 President Park Geun-hye salutes during her inauguration ceremony at the National Assembly in Seoul on Monday.

The new South Korean president, Park Geun-hye, steps into office at a particularly challenging time, with archnemesis North Korea's own recently installed leader rattling missiles and nuclear weapons in an apparent attempt to solidify his hold on power.

Addressing the Korean people, she warned the North that she "will not tolerate any action that threatens the lives of our people and the security of our nation." But she also signaled a desire to move ahead with a campaign promise for trust-building with Pyongyang "on the basis of credible deterrence."

According to The Guardian, Park has "made conciliatory gestures toward the North. She met the regime's former leader, Kim Jong Il, in Pyongyang in 2002 and noted in her 2007 autobiography that Kim had apologized for a failed raid on the South Korean presidential Blue House by 31 North Korean commandos in 1968."

In a piece written for Foreign Affairs in 2011, she outlined her "middle-path" approach to relations with the North:

"Previous governments in Seoul have alternatively attempted to engage and deter Pyongyang. The ones that have emphasized accommodation and inter-Korean solidarity have placed inordinate hope in the idea that if the South provided sustained assistance to the North, the North would abandon its bellicose strategy toward the South. But after years of such attempts, no fundamental change has come. Meanwhile, the governments in Seoul that have placed a greater emphasis on pressuring North Korea have not been able to influence its behavior in a meaningful way, either.

A new policy is needed: an alignment policy, which should be buttressed by public consensus and remain constant in the face of political transitions and unexpected domestic or international events."

As The New York Times notes, as much as anything else, Park is responding to a South Korea vastly different from the one Park Chung-hee ruled from 1961 to 1979:

" ... unlike her father, who kept South Korea orderly if gagged, Ms. Park must struggle to win back younger and liberal South Koreans who have no fear of speaking out against her. When she named Queen Elizabeth I of Britain as her role model, they filled blog space with comments berating her sense of entitlement. They openly called her election a return to the past, arguing that the seeds of some of the country's biggest problems, such as the unruly influence of family controlled conglomerates, were sown under her father and accused her of glorifying his dictatorship."

The Guardian quotes Siegfried Hecker, a longtime Korea watcher, as saying Park faces an uphill battle in forging a new relationship with Pyongyang.

According to Hecker, "Normalization of relations, a peace treaty, access to energy and economic opportunities, those things that come from choosing electricity over bombs and have the potential of lifting the North Korean people out of poverty and hardship, will be made much more difficult, if not impossible, for at least the next five years."