Accessibility links
Scientists May Have Uncovered Ancient Microcontinent : The Two-Way Scientists believe a long-lost land mass, sandwiched between the land masses that make up today's India and Madagascar, was lost on the sea tens of millions of years ago.

Scientists May Have Uncovered Ancient Microcontinent

Scientists May Have Uncovered Ancient Microcontinent 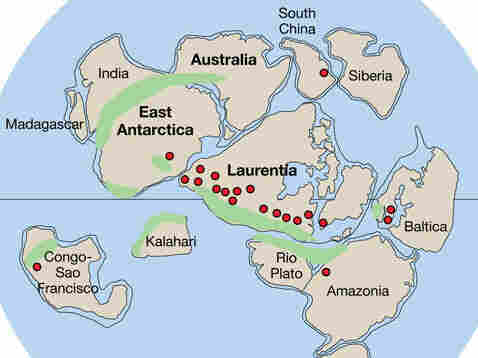 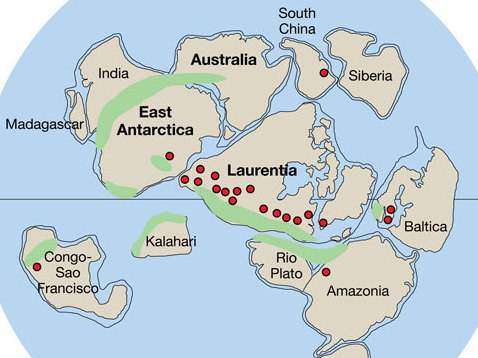 Rodinia. Mauritia is shoehorned between India and Madagascar.

The remains of a small continent have been hiding right under our noses for the past 85 million years or so.

That's according to a new study published Sunday in the journal Nature Geoscience. Scientists looked at lava sands from beaches on Mauritius to determine when and where the material might have originated.

Their conclusion? The lava sands, containing particles called zircon xenocrysts, came from a Precambrian microcontinent dubbed "Mauritia" that was sandwiched between the land masses that today make up Madagascar and India. It was all part of a supercontinent known as Rodinia that existed between 2 billion and 85 million years ago. (Not to be confused with the better known and slightly more contemporary supercontinent Pangaea).

Mauritia was a sliver of land that broke apart and disappeared under the sea as the Rodinia ripped itself apart as part of the process of plate tectonics, scientists believe.

The BBC quotes the study's lead author, Trond Torsvik, as saying the sand his team examined dates to a 9-million-year-old eruption near the modern-day islands of Marion and Reunion that spewed much older material.

"We found zircons that we extracted from the beach sands, and these are something you typically find in a continental crust. They are very old in age," said Torsvik of the University of Oslo in Norway.

Torsvik believes pieces of Mauritia have been interred under 6 miles of surface and spread over a swath of the Indian Ocean, according to the BBC.

"However, a small part could have survived.

" 'At the moment the Seychelles is a piece of granite, or continental crust, which is sitting practically in the middle of the Indian Ocean,' explained Prof Torsvik.

" 'But once upon a time, it was sitting north of Madagascar. And what we are saying is that maybe this was much bigger, and there are many of these continental fragments that are spread around in the ocean.' "