Accessibility links
Sometimes 'The Lord Seemed To Sleep,' Pope Says In Farewell : The Two-Way A huge crowd gathered Wednesday for Pope Benedict XVI's final general audience before his resignation takes effect on Thursday. In his remarks, the pope indirectly acknowledged that his nearly 8 years as head of the Roman Catholic Church have not always been easy.

Sometimes 'The Lord Seemed To Sleep,' Pope Says In Farewell

Sometimes 'The Lord Seemed To Sleep,' Pope Says In Farewell 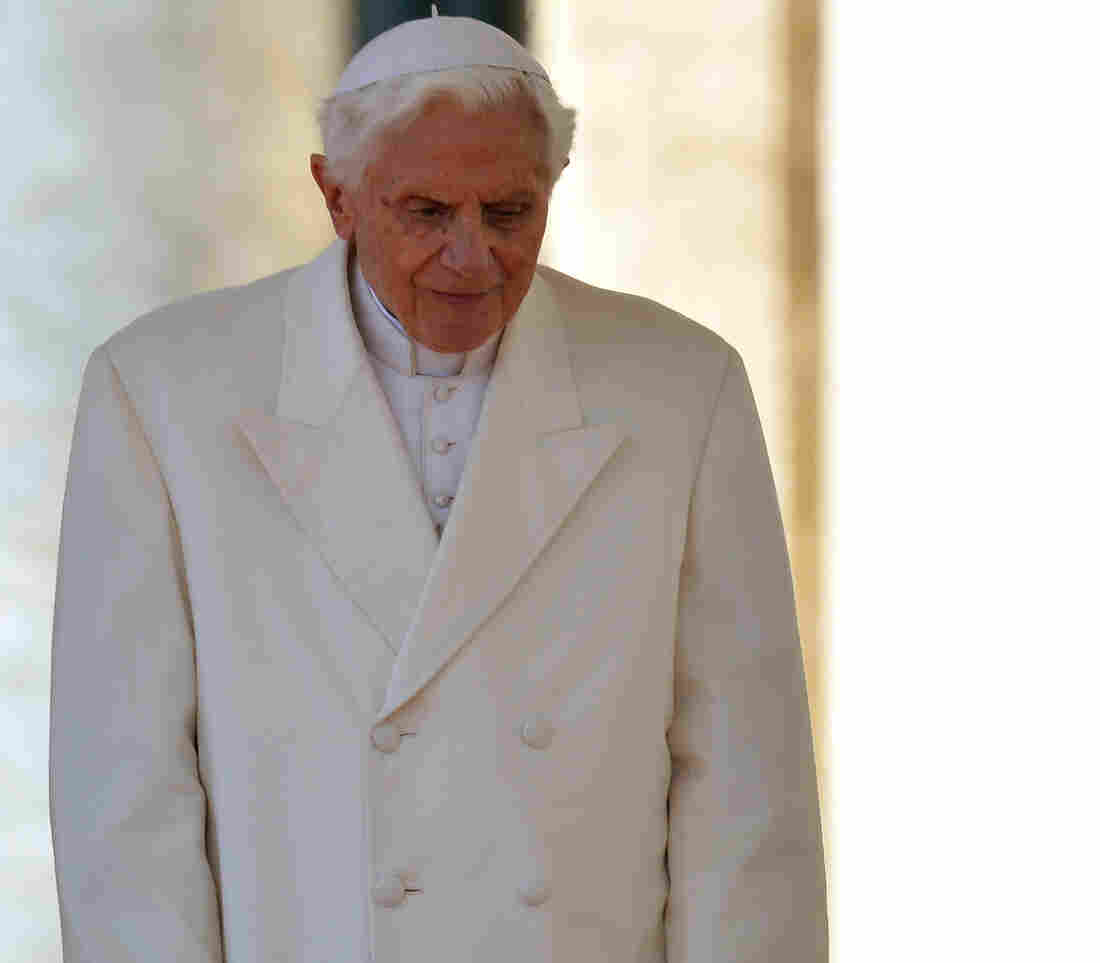 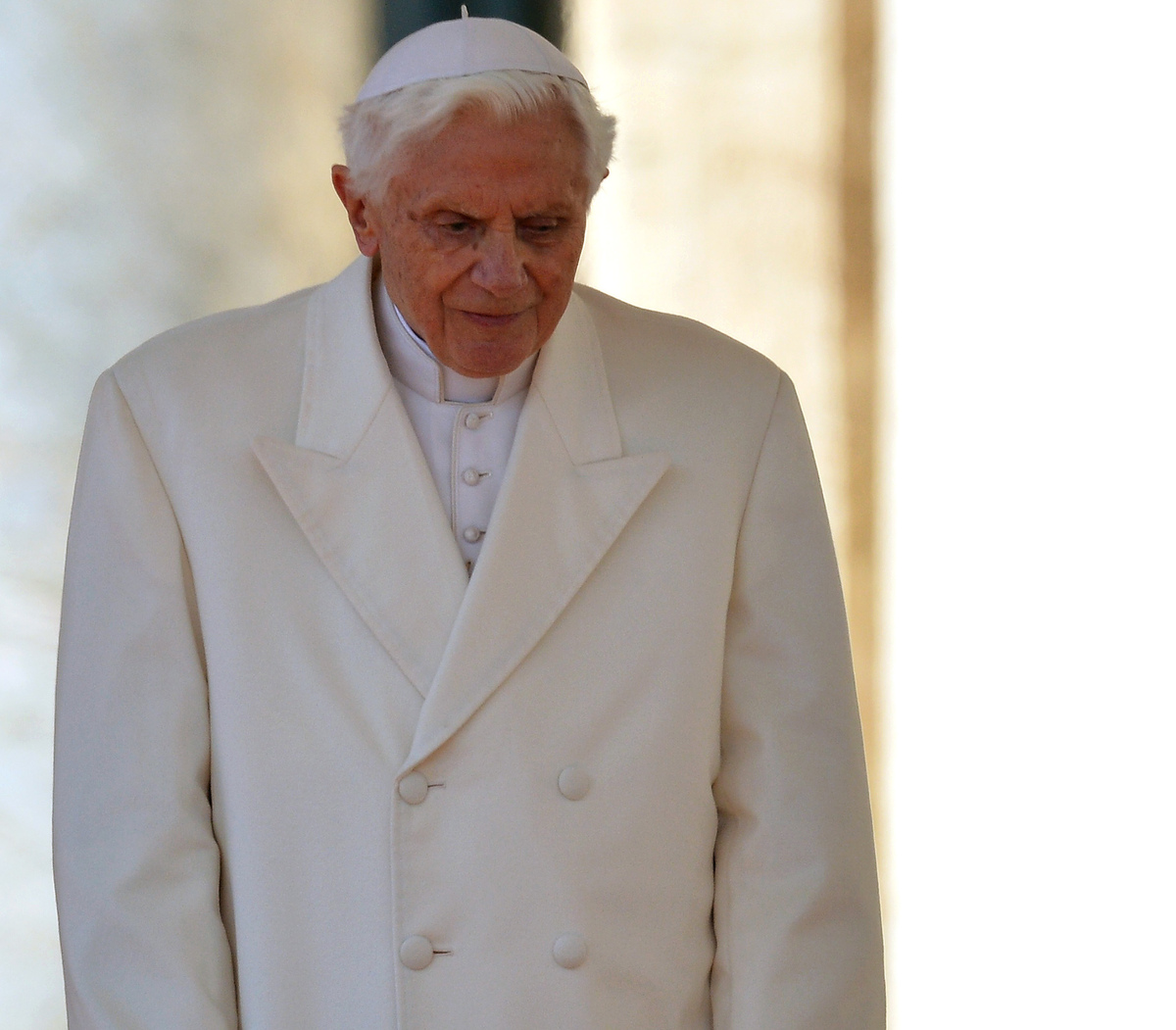 Pope Benedict XVI as he arrived on the altar in St. Peter's Square Wednesday for his last general audience.

Bidding an emotional farewell to a huge crowd gathered in The Vatican's St. Peter's Square, Pope Benedict XVI indirectly acknowledged Wednesday that his nearly 8 years as head of the Roman Catholic Church have not always been easy.

Sometimes "the Lord seemed to sleep," the pope said during the last general audience before his resignation takes effect Thursday. Benedict, whose years as pope have included further revelations about sexual abuse scandals involving priests and have been marred by questions about his management skills, said that while "the Lord has given us many days of sunshine and gentle breeze, days in which the catch has been abundant; [then] there have been times when the seas were rough and the wind against us."

He also, as Reuters reports, told the faithful that he's convinced the decision to retire because of his age (85) and fragile health is the right thing to do. "I took this step in the full knowledge of its gravity and rarity but with a profound serenity of spirit," Benedict said. And, he added, loving the church means "having the courage to take difficult and anguished choices, always having in mind the good of the church and not oneself."

According to The Associated Press, "tens of thousands of people toting banners saying 'Grazie!' — 'thank you' — jammed the piazza to bid farewell to the pope at his final general audience — the appointment he has kept each week to teach the world about the Catholic faith."

The Whispers in the Loggia blog that follows Vatican news closely says as many as 200,000 people may have been gathered in the square. It has the Vatican's English translation of "B16's last word as Pope." In conclusion, Benedict said:

"Dear friends! God guides His church, maintains her always, and especially in difficult times. Let us never lose this vision of faith, which is the only true vision of the way of the church and the world. In our heart, in the heart of each of you, let there be always the joyous certainty that the Lord is near, that He does not abandon us, that He is near to us and that He surrounds us with His love."

Courtesy of Now This News, here's a video clip from the pope's audience.

John Allen, the senior correspondent for the National Catholic Reporter who's going to be on the cable news networks a lot in coming weeks as they tap his expertise, just told CNN that most of the 100+ cardinals who will cast votes for the next pope are already in Rome. They're "here to say goodbye" to Benedict, he said.

He expects they will meet Monday in what's known as a "general congregation" to set a date for the conclave — the session at which they vote for a pope. Allen expects the conclave will start "sometime around the 8th or 9th of March." The cardinals' goal will be to have a pope chosen before Palm Sunday, which this year falls on March 24.

Allen's "quick course in conclave 101" is online here. One thing it doesn't take into account is the word this week that Benedict said the cardinals don't have to wait for 15 days after he steps down to begin.