Accessibility links
'I Love Him,' Dennis Rodman Says Of North Korean Leader Kim Jong Un : The Two-Way The former NBA star known as "The Worm" visited the Stalinist state to be part of an HBO series exploring cultures around the world. 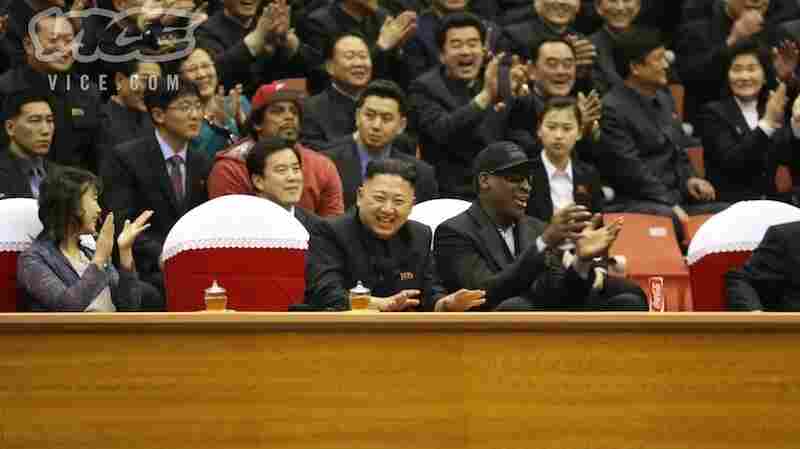 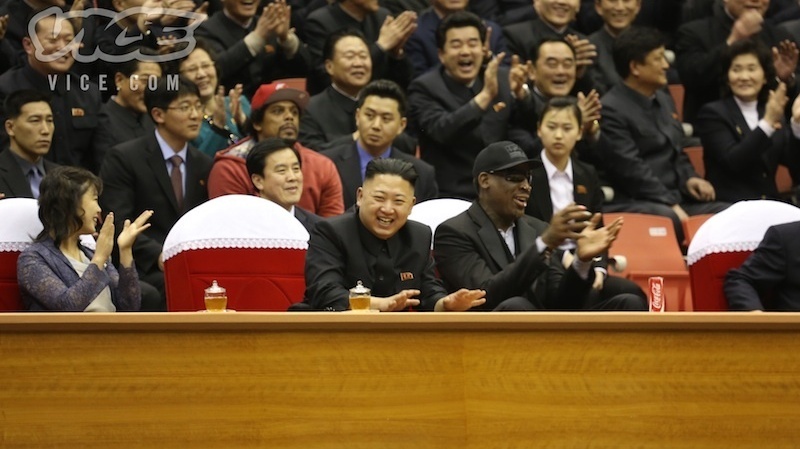 On his way home Friday from North Korea, former NBA star Dennis Rodman said Kim Jong Un, his father and grandfather have been "great leaders." According to The Associated Press, Rodman also said of the young North Korean leader that "he's proud, his country likes him — not like him, love him, love him. ... Guess what, I love him. The guy's really awesome."

Our original post — Dennis Rodman To Kim Jong Un: 'You Have A Friend For Life':

Add this to the controversial things that former NBA star Dennis Rodman has done over the years:

"You have a friend for life," he told North Korean leader Kim Jong Un on Thursday. Word of his comments comes from the VICE media production company that sent Rodman and members of the Harlem Globetrotters to the Stalinist state as part of an upcoming HBO series that will explore "news, culture and current events from all around the world."

Rodman, known as "The Worm," showed up with a small group of Americans in Pyongyang earlier this week.

According to VICE and China's Xinhua News agency, Rodman and the "supreme leader" sat together Thursday to watch a basketball game involving North Korea's top players and the three Globetrotters who are with Rodman on the visit. The Americans — along with VICE correspondent Ryan Duffy — were divided between the two sides. The game reportedly ended in a 110-110 tie.

Xinhua reports Rodman said after the game that "although relations between the two countries are regrettable, personally I am a friend of Marshal Kim Jong Un and the DPRK people."

The now 51-year-old Rodman, as The Guardian reminds us, "is best remembered for his colorful appearance (dyed hair, tattoos, piercings) and his eccentric, high profile antics":

-- "Dating Madonna when that was still a big deal.

-- "Wearing a wedding dress, and rocking it it should be added, to promote his first book.

-- "Lying in a coffin to promote his second book.

-- "Appearing in some of the worst action movies of all time.

-- "Taking on a second career as a professional wrestler during one of his NBA suspensions.

-- "Earning one of those suspensions by headbutting a referee."

Kim, of course, has inherited from his father and grandfather the leadership of a Stalinist state that as NPR's Louisa Lim has said is "economically ... a basket case" and where "hunger still haunts" its people. Under the young leader, North Korea has also continued to ignore international condemnation and move ahead with tests of atomic devices and long-range rockets.

And as Human Rights Watch has said, North Korea has a "dire human rights record." It has reported that:

"Arbitrary arrest, detention, lack of due process, and torture and ill-treatment of detainees remain serious and pervasive problems. North Korea also practices collective punishment for various anti-state offenses, for which it enslaves hundreds of thousands of citizens in prison camps, including children. The government periodically publicly executes citizens for stealing state property, hoarding food, and other 'anti-socialist' crimes, and maintains policies that have continually subjected North Koreans to food shortages and famine."