Accessibility links
In Maui, Wild Chicken Spurs Power Outage At Airport, Surrounding Area : The Two-Way A chicken's close inspection of a transformer caused a power outage and brief delays at Maui's Kahului Airport this week. After the incident in the airport's rental car area, security screenings were performed manually and passengers had to use mobile stairways on the tarmac. 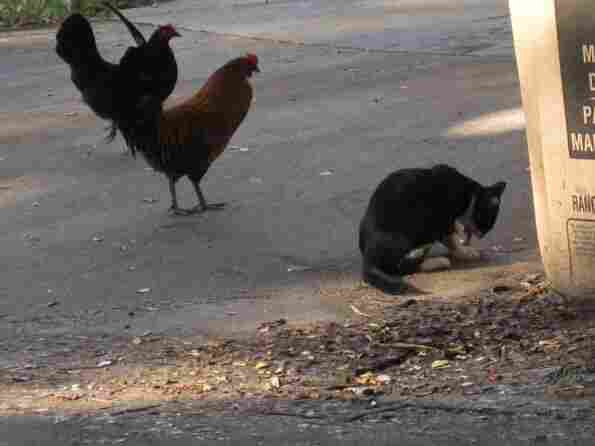 Why are so many feral chickens crossing the road in Maui? To get a rental car, of course. Stephanie Federico/NPR hide caption 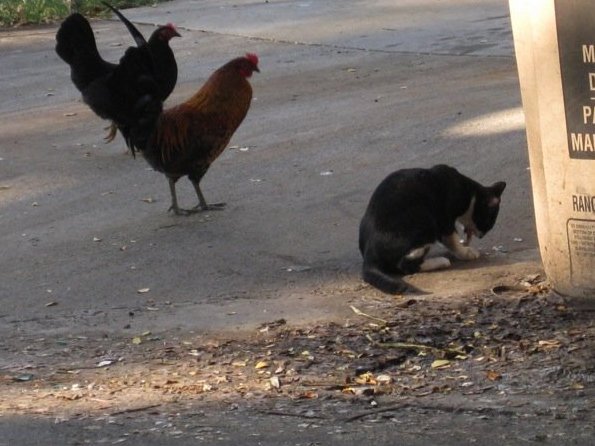 Why are so many feral chickens crossing the road in Maui? To get a rental car, of course.

A roaming chicken's close inspection of a transformer caused a power outage and brief delays at Maui's Kahului Airport this week. The incident occurred Tuesday afternoon, when the bird wandered into a transformer at the airport's rental car area, leaving parts of the facility without power for more than an hour.

The airport's tower and air traffic control operations were not affected, reports The Maui News. Here's a look at the after-effects of the bird's tussle with a transformer:

Some of those conditions lasted 30 minutes; others lingered for a bit more than an hour. The situation was complicated by a short in the electrical system that would normally convey generator power to the airport, officials told Maui News. No major flight delays were reported, and it's unclear whether the chicken survived its encounter.

Maui has reportedly seen a rise in its feral chicken population in recent years. Common theories hold that the birds escaped from chicken farms, either on their own or in the disarray brought by large storms.

And the wild chickens' impact on daily life can be wide-ranging. Consider this comment on a 2008 story on the Go Visit Hawaii website:

"The main problem I face is when I get a call from an important client and then all of sudden you hear a rooster making all kinds of noise in the background. The clients may have originally thought I worked in some big air-conditioned skyscraper cubicle only to hear roosters blow my cover."

The Hawaiian islands apparently lack enough traditional predators to keep the chicken population in check. And as Maui News reported in 2011, the birds are considered "awful-tasting."