Accessibility links
Jedi? Vulcan? Mind Meld? Mind Trick? What Was Obama Thinking? : The Two-Way He can't do a "Jedi mind meld" with Republicans, Obama said. To which fans of Star Trek and Star Wars immediately said he was mixing metaphors. 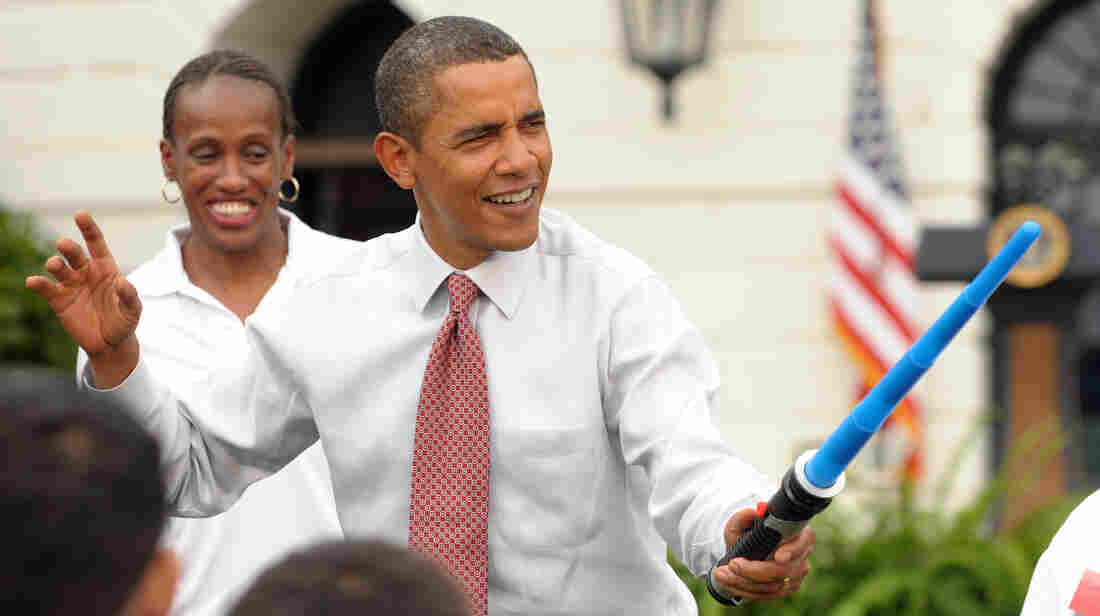 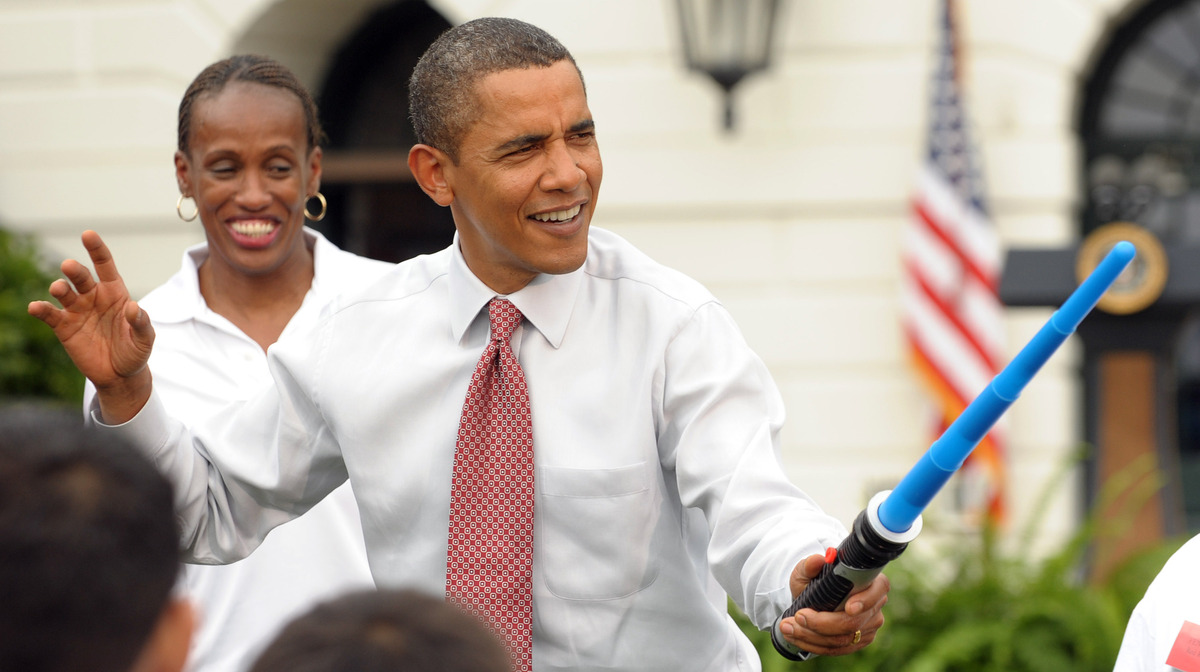 That's a light saber, sir, not a phaser. (President Obama in September 2009, during a White House event promoting Chicago's bid for the 2016 Summer Olympics.)

He can't do "a Jedi mind meld" with Republicans and get them to see his way about taxes and spending, President Obama said Friday.

"Pres Obama Mixed Metaphor of the Day: The 'mind meld' is not a Jedi tool from Star Wars, but a Vulcan ability from Star Trek."

OK, at the risk of being deluged with messages from Star Wars and Star Trek fans but in the hope we can provide a little saber light, we'll enter this risky territory. 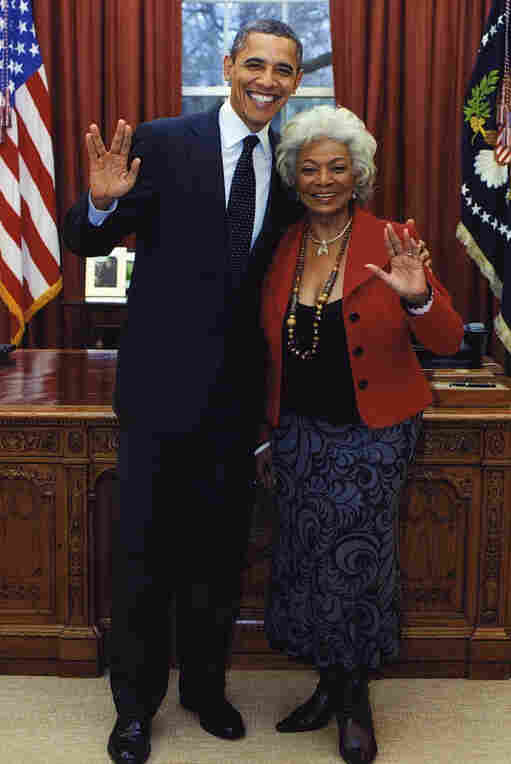 He does know about "live long and prosper." President Obama with actress Nichelle Nichols (Star Trek's Lt. Uhura) in the Oval Office one year ago. @RealNichelle hide caption 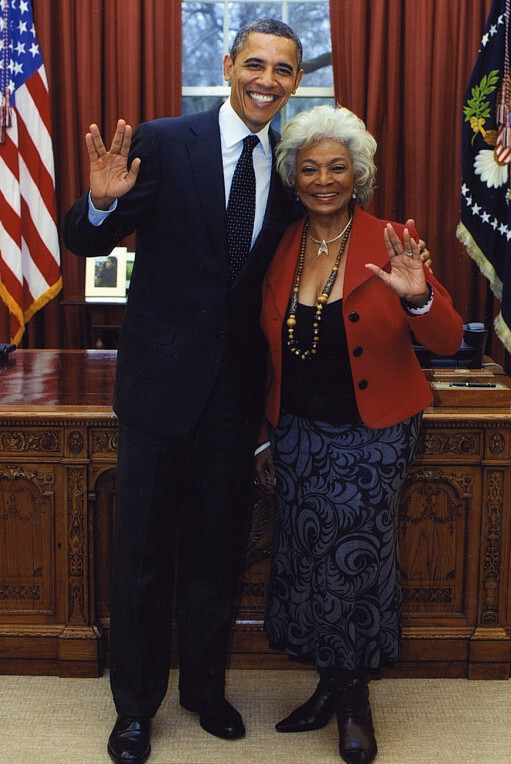 He does know about "live long and prosper." President Obama with actress Nichelle Nichols (Star Trek's Lt. Uhura) in the Oval Office one year ago.

The mind meld, as Trekkies will tell you, is a technique "that allows a Vulcan to merge his or her mind with the essence of another's mind purely by using specialized contact fingertip-points."

Jedi knights, from Star Wars, are of course known for their mind tricks — "a spectrum of Force powers which influenced the thoughts of sentient creatures, most commonly used to coerce into agreement by suggestion through voice manipulation, or to cause one to reveal information," as the Star Wars Wikia says.

There is, according to the Star Wars Wikia, something called a "force meld" or "Jedi meld." It's "a technique where a number of Force users joined their minds together through the Force, drawing strength from each other."

Now, though we can't read the president's mind, we think we know what he was trying to say. Obama noted that some seem to believe he can do "a Jedi mind-meld with these folks and convince them to do what's right." To us, it sounds like he meant Jedi mind trick — as in, influencing the Republicans' thoughts.

But we'd have to be able to meld with his mind to know for sure. If only Spock were here to help.

As expected, the White House has responded to the mixed metaphor by tweeting this graphic: 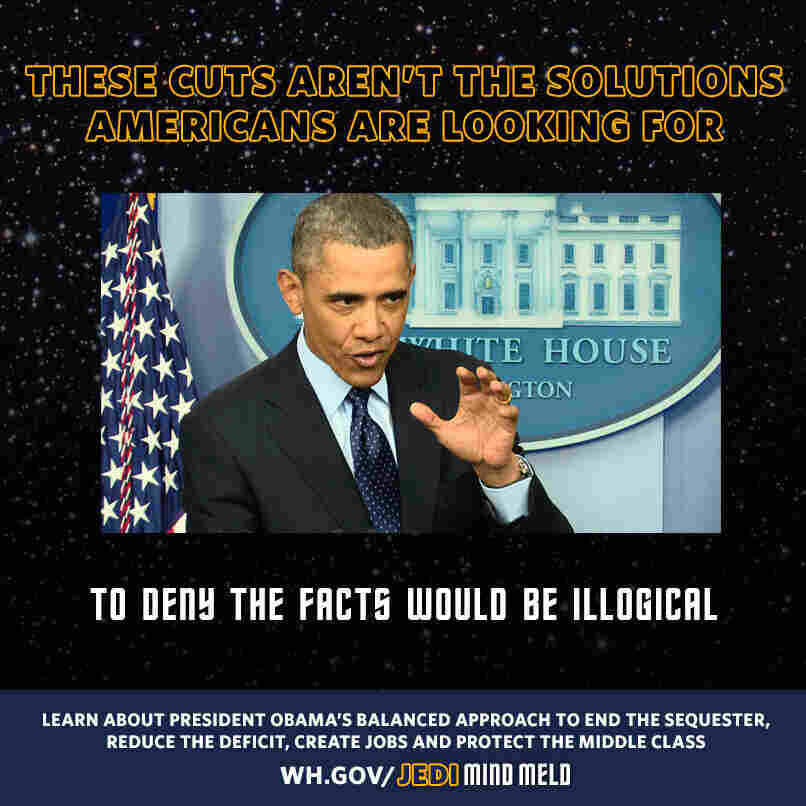 Notice, that they continue mixing metaphors and this time they are very much doing it on purpose. (Note the different typeface.)