Accessibility links
Indian On Hunger Strike For 12 Years Charged With Attempted Suicide : The Two-Way Irom Sharmila hasn't eaten on her own since November 2000. She is protesting against an Indian law that suspends human rights guarantees in conflict-ridden parts of the country.

Indian On Hunger Strike For 12 Years Charged With Attempted Suicide

Indian On Hunger Strike For 12 Years Charged With Attempted Suicide 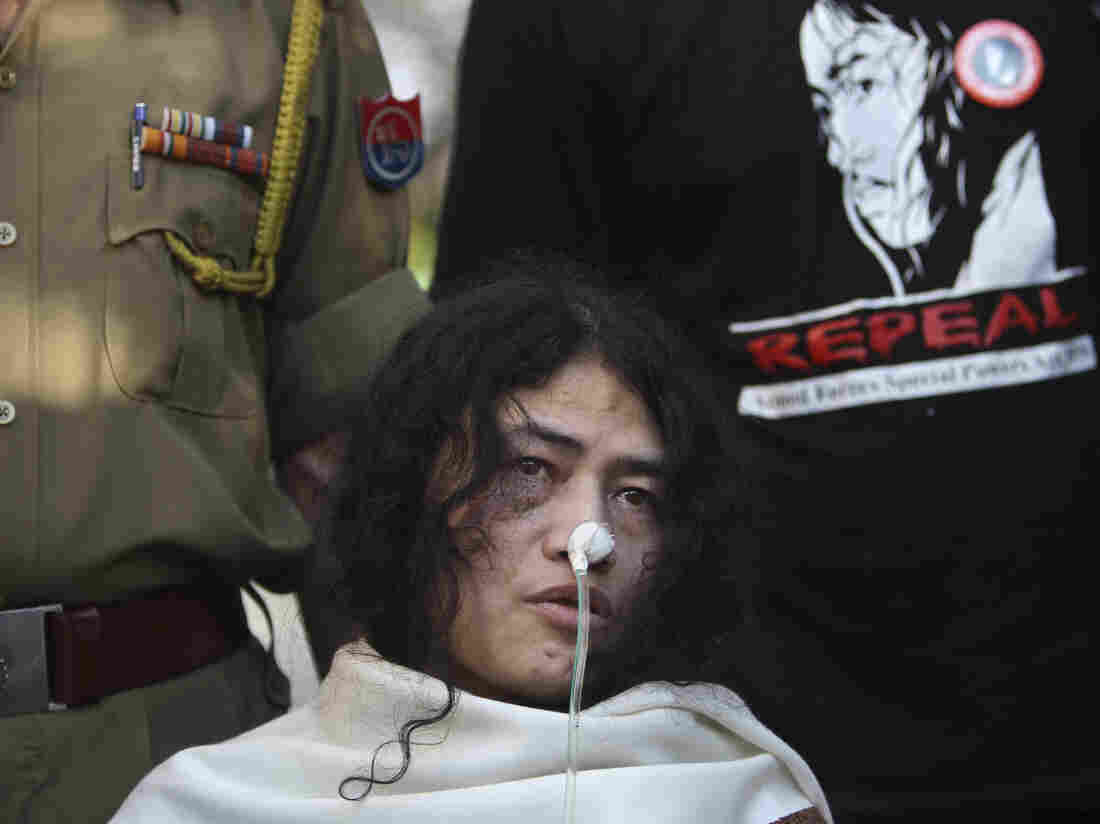 Activist Irom Sharmila is flanked by a policeman, left, and a supporter, on Monday in New Delhi. Sharmila has been on a hunger strike for 12 years to protest an Indian law that suspends many human rights protections in areas of conflict. Tsering Topgyal/AP hide caption 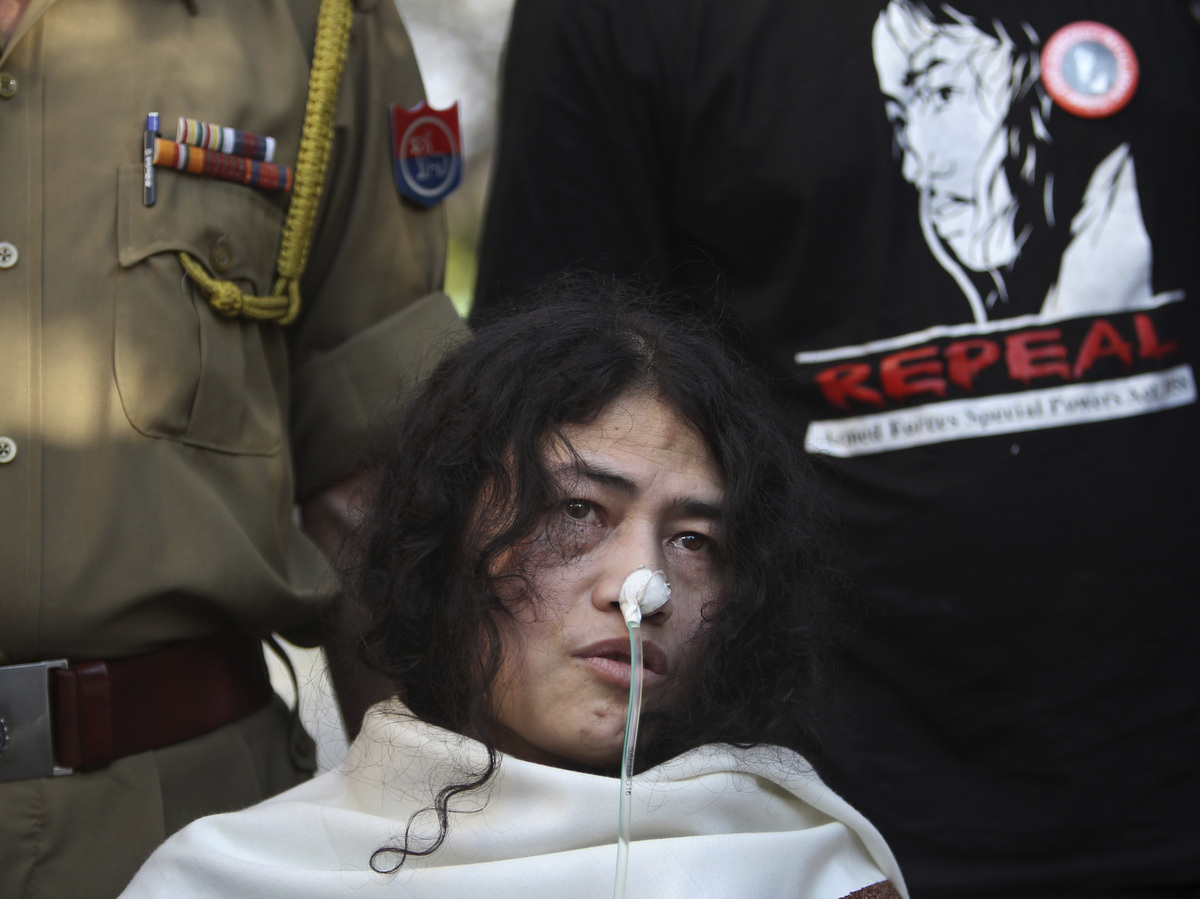 Activist Irom Sharmila is flanked by a policeman, left, and a supporter, on Monday in New Delhi. Sharmila has been on a hunger strike for 12 years to protest an Indian law that suspends many human rights protections in areas of conflict.

Hunger strikes are often used in India as a method of protest — but try being on one for 12 years.

That's how long it's been since Irom Sharmila last ate on her own. She is protesting an Indian law that suspends human rights guarantees in conflict-ridden parts of the country. The government is force-feeding her through a tube. And on Monday, Sharmila was charged with attempted suicide.

First, some background: Sharmila is protesting the Armed Forces Special Powers Act, an Indian law that gives special powers to the country's military in restive regions. The law is in force in the state of Jammu and Kashmir, as well as across the country's northeast, the scene for decades of several separatist movements. Sharmila is from Manipur, one of these northeastern states. Here's how The Associated Press describes the law:

"Under the law, in effect in Indian-ruled Kashmir and parts of the country's northeast, troops have the right to shoot to kill suspected rebels without fear of possible prosecution and to arrest suspected militants without a warrant. It also gives police wide-ranging powers of search and seizure."

Human Rights Watch has called the law "a tool of state abuse, oppression and discrimination." But the military says the law is needed to combat insurgents, and the government has refused to weaken it.

Sharmila, whose supporters call her "Iron Lady," wants the law repealed, and she's hoping her hunger strike draws attention to the law and its consequences in Manipur and elsewhere. She last ate of her own volition on November 2000. Just days later, authorities in Manipur arrested her; since then, she's been force-fed through a tube in her nose. The law mandates that she is released once a year. Authorities then check if she eats. And when she doesn't, they take her into custody and force feed her again.

In 2006, Sharmila attended a protest in the India capital, New Delhi. Police there took her from the venue to hospital, and registered a case of attempted suicide against her. It is that case to which the current charge is linked.

Fast-forward to Monday: Sharmila pleaded not guilty to the charges, and said she won't give up her fast until the AFSPA is repealed. Here's more from The Hindu newspaper about the exchange between Sharmila and the presiding judge:

"Metropolitan Magistrate Akash Jain told her: 'Madam, there is an accusation against you that you tried to commit suicide.' To this, Ms. Sharmila responded with an emphatic 'No.'

"'On April 20, 2012, an order was passed against you charging you under Section 309 of the Indian Penal Code [attempting to commit suicide]. Do you plead guilty to the charge,' Mr. Jain asked.

"Ms. Sharmila replied: 'I don't want to commit suicide. Mine is only a non-violent struggle to live as a human being.'

"Mr. Jain said: 'But the law of the land does not permit you to take your life.'

"'I love life. I love life. I don't want to take my life. What I want is justice and peace,' Ms. Sharmila replied. 'I am protesting against AFSPA. If AFSPA is repealed I will take food again.'"

The trial begins May 22.

We reported extensively in 2011 on a hunger strike undertaken by activist Anna Hazare who was protesting against corruption. As Eyder noted at the time, hunger strikes are a common method of protest in India, made famous by Mohandas Gandhi during British rule.