Accessibility links
Venezuelan President Hugo Chávez Has Died : The Two-Way Chávez, one of Washington's most intransigent adversaries, had served as the Venezuelan president since 1999. 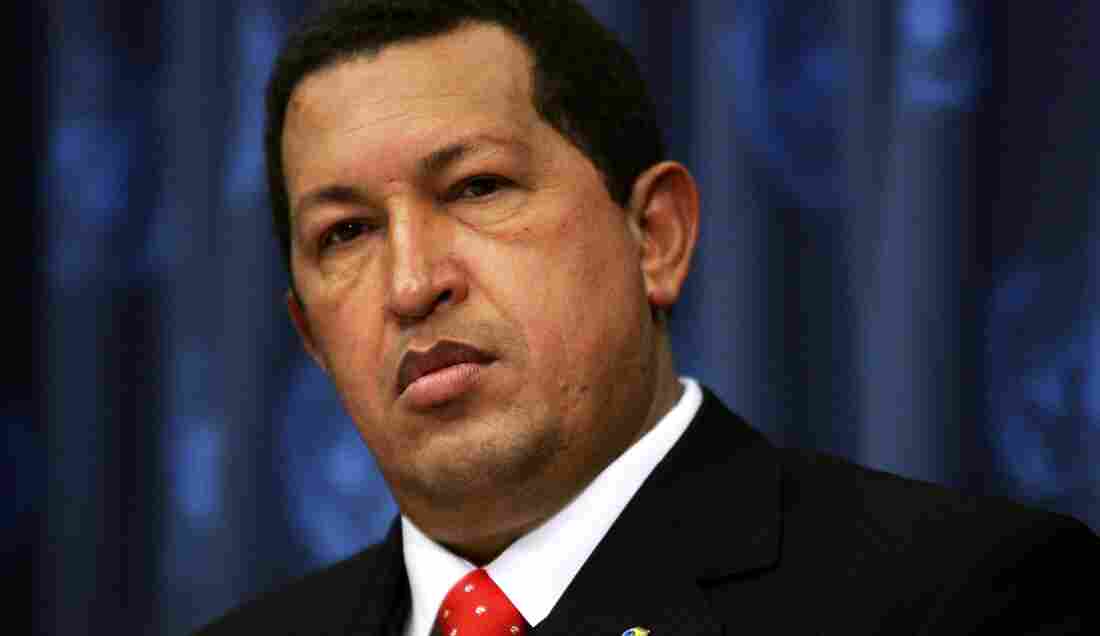 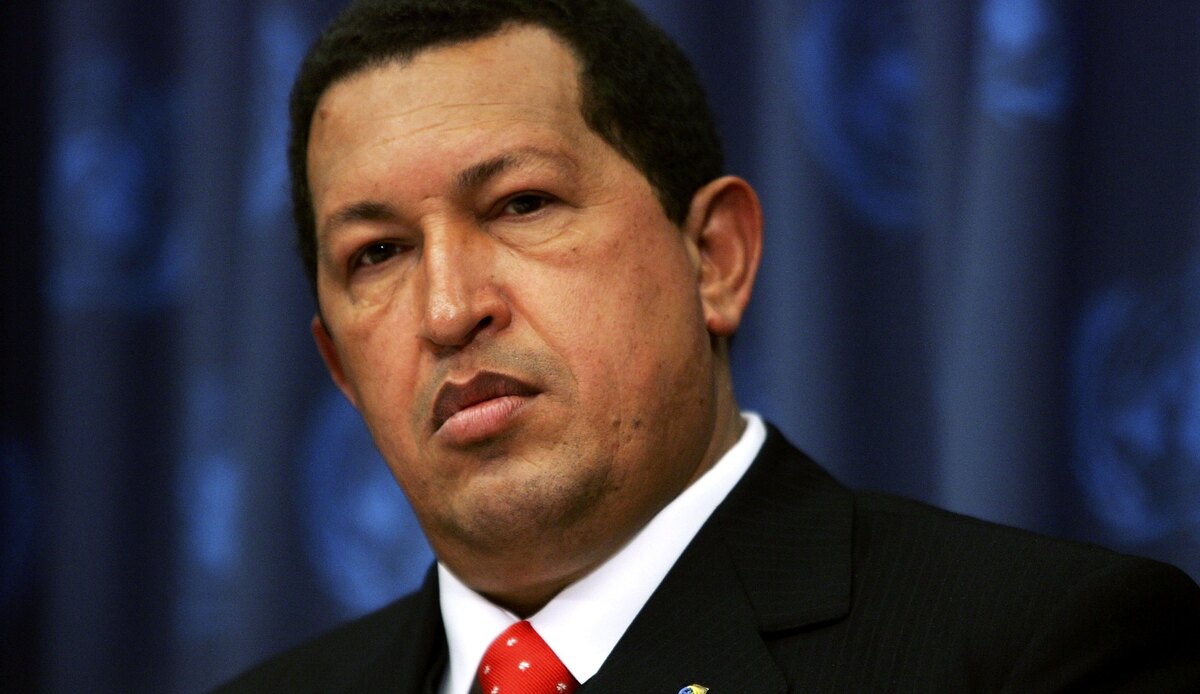 In power since 1999, the former military commander became an icon of socialist policies in Latin America. With his country's oil wealth as backup, he launched fierce and unyielding criticism of the United States and its allies.

"During more than 14 years in office, Chavez routinely challenged the status quo at home and internationally. He polarized Venezuelans with his confrontational and domineering style, yet was also a masterful communicator and strategist who tapped into Venezuelan nationalism to win broad support, particularly among the poor."

Chávez was battling cancer when he won a tough reelection campaign last year. 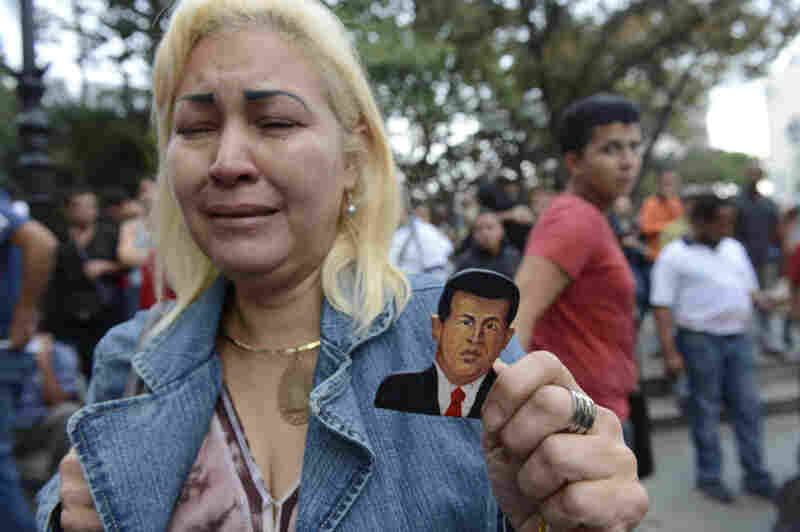 A supporter of Venezuelan President Hugo Chavez cries after learning of his death in Caracas on March 5, 2013. Juan Barreto/AFP/Getty Images hide caption 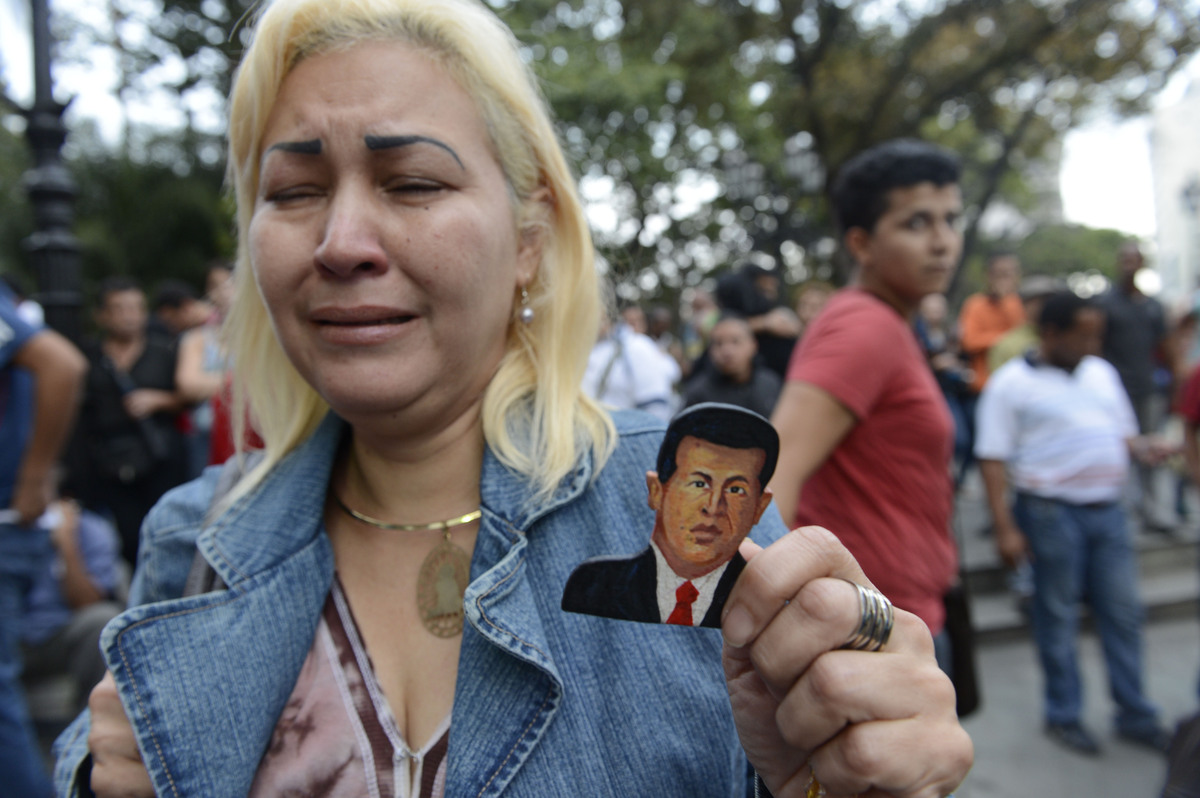 A supporter of Venezuelan President Hugo Chavez cries after learning of his death in Caracas on March 5, 2013.

As we reported earlier, Maduro called a meeting of top Venezuelan politicians today and he asked the country to keep working, despite Chavez's ailment.

Maduro said history would judge Chávez as a "new liberator."

"That's what Chávez means to us and to our history; our Chávez is the 21st Century liberator," Maduro said during a press briefing.

"It's a moment of deep pain," he said. He asked the country for "peace and tranquility" and asked Chávez's foes, who had questioned whether he should be considered president because he was never formally inaugurated, to show "respect."

"We are heirs and sons of a giant," Maduro said.

The press conference ended with Maduro lifting his fist and saying, "Honor and glory to our commander Hugo Chávez."

TeleSur is broadcasting live from Venezuela.

This is a breaking news story, we'll have more as it develops.

Venezuelan Foreign Minister Elias Jaua tells the TeleSur network that the country's vice president, Nicolas Maduro, will assume power until elections that will be called within 30 days.

NPR member station WLRN is Storifying coverage of Miami. Among their highlights, a report from the Miami Herald's Manny Navarro. He reports that the Miami Marlins are playing Venezuela tonight and there will be "no moment of silence for Hugo Chávez tonight... in Jupiter. Flag at full staff too."

Henrique Capriles, who ran against Chavez last year, said he was in solidarity with the family and supporters of Chávez.

"In tough moments, we need to show our deep love and respect for our Venezuela! The Venezuelan family is united," he tweeted.

The Miami suburb of Doral, which has the largest concentration of Venezuelans in the United States, is seeing celebration.

NBC 6 reported from a Venezuelan restaurant in Doral, where people were celebrating by waving Venezuelan flags and singing the national anthem.

"We're not celebrating the death of anything," one patron said. "We're celebrating a new beginning for Venezuela."

NBC6 is streaming their live coverage.

The White House just sent out this statement:

"At this challenging time of President Hugo Chavez's passing, the United States reaffirms its support for the Venezuelan people and its interest in developing a constructive relationship with the Venezuelan government. As Venezuela begins a new chapter in its history, the United States remains committed to policies that promote democratic principles, the rule of law, and respect for human rights."

The Guardian has put together a video with highlights of Chávez's political life. It begins with his failed coup attempt and goes through his many meetings with controversial leaders, as well as his many controversial comments:

The Miami Herald has a bit more on the early days of Chávez's:

"Born to teachers in the agricultural heartland of Barinas state, Chávez was the second of six brothers. According to his biographers Alberto Barrera Tyszka and Cristina Marcano, he joined the military academy in 1971. It was there that Chávez was exposed to the writings of Latin American liberator Simón Bolivár and Venezuelan revolutionary Ezequiel Zamora that gave rise to his particular blend of nationalistic socialism that would guide his life and presidency.

"A star pupil in the academy, he quickly moved up the ranks to commander in 1991, the same year he was put in charge of a paratrooper battalion in the coastal city of Maracay."

The BBC's Irene Caselli reports from Caracas that reaction to Chávez's death has been "mixed."

"Fireworks have been let off in celebration in an anti-Chavez part of the city, she says, but many of the president's supporters have been crying and praying at the hospital where we was being treated," the BBC reports.

Television images showed many people on the streets looking somber. El Universal posted video of Chávez supporters at Plaza Bolívar. The video shows them chanting, "We are all Chávez."

Bloomberg has a good recap of what Chávez's final months were like:

"Chavez was unable to return to Caracas for a swearing-in ceremony to start his third six-year term on Jan. 10, 2013, after winning about 55 percent of the vote over Henrique Capriles Radonski in October. He traveled back to the capital Feb. 18, 2013, and was transferred to a military hospital, the government said.

"Aside from photos the government published Feb. 15, 2013, of Chavez in his Havana hospital bed, Venezuelans hadn't seen or heard from their president since he stepped off a plane in Cuba for his Dec. 11 operation.

"Chavez suffered a respiratory infection following the surgery that required the use of a tracheal tube and left him unable to speak, the government said."

Christopher Sabatini, senior director for policy at the Council of the Americas, tells our Newscast unit Chávez's death could signal the "end of an era."

"Chávez marked the backlash in Latin America ... to a convergence toward Democracy and Democracy building, human rights as well as market reforms. Chávez really represents the collapse of, in some cases, old, tired party systems and democratic systems and the emergence of a new style of leadership," Sabatini said.

The big question now is what happens to Venezuela's revolution. The New York Times reports that Chávez leaves a country bitterly divided.

The constitution calls for new elections within 30 days of the president's death. The Times explains:

"The election is likely to pit Mr. Maduro, whom Mr. Chávez designated as his political successor, against Henrique Capriles Radonski, a young state governor who lost to Mr. Chávez in a presidential election in October.

"But there has been heated debate in recent months over clashing interpretations of the constitution, in light of Mr. Chávez's illness, and it is impossible to predict how the post-Chávez transition will proceed. Mr. Chávez was given a diagnosis of cancer in June 2011, but throughout his treatment he kept many details about his illness secret, refusing to say what kind of cancer he had or where in his body it occurred. He had three operations from June 2011 to February 2012, as well as chemotherapy and radiation treatment, but the cancer kept coming back. The surgery and most other treatments were done in Cuba."

We've now posted a full obituary for Chávez. NPR's Juan Forero writes that Chávez was certainly a leader with an "outsized personality."

But what did his transition of Venezuela into socialism really accomplish for the country? Forero writes:

"Chavez, who ruled Venezuela from 1999 until his death Tuesday, was not able to turn the country's oil wealth into broad-based prosperity. At various times, the country experienced high inflation, food shortages and many other economic problems.

"On the international stage, the countries that followed Venezuela's lead were some of Latin America's poorest and least influential. Chavez maintained fervent supporters throughout his rule. But in the end Venezuela was, in some ways, worse off than when Chavez began."