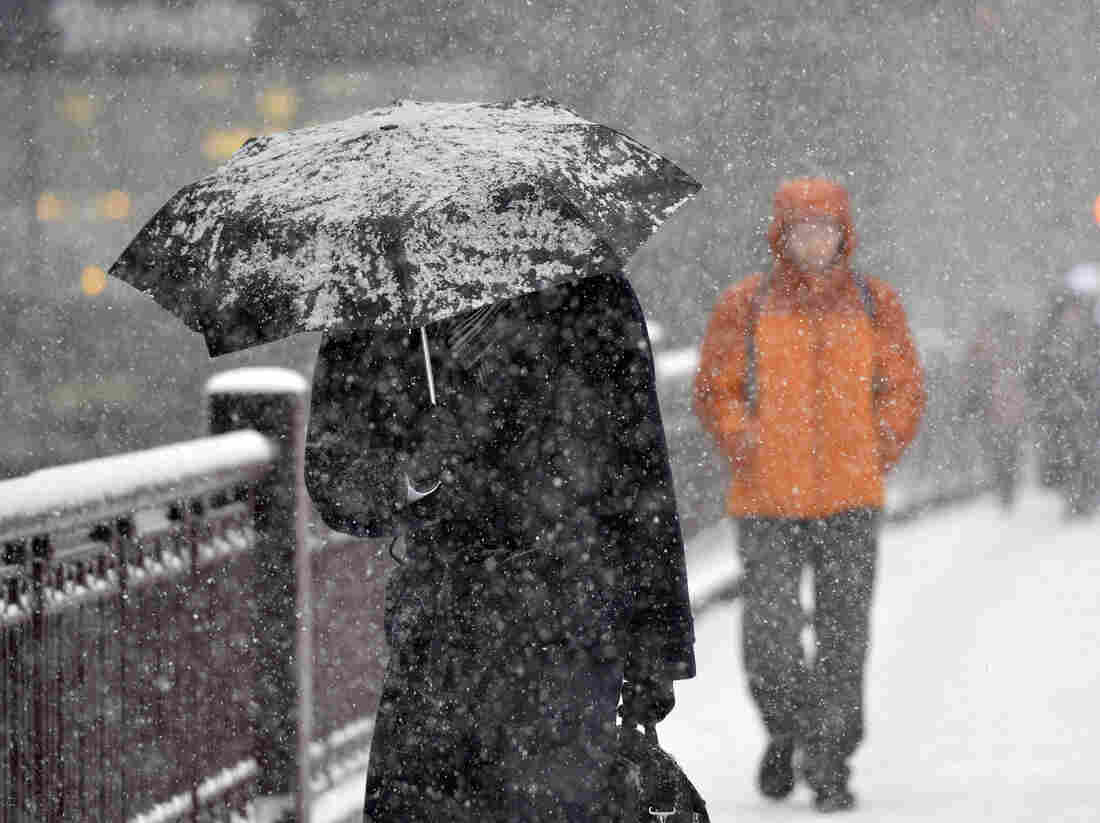 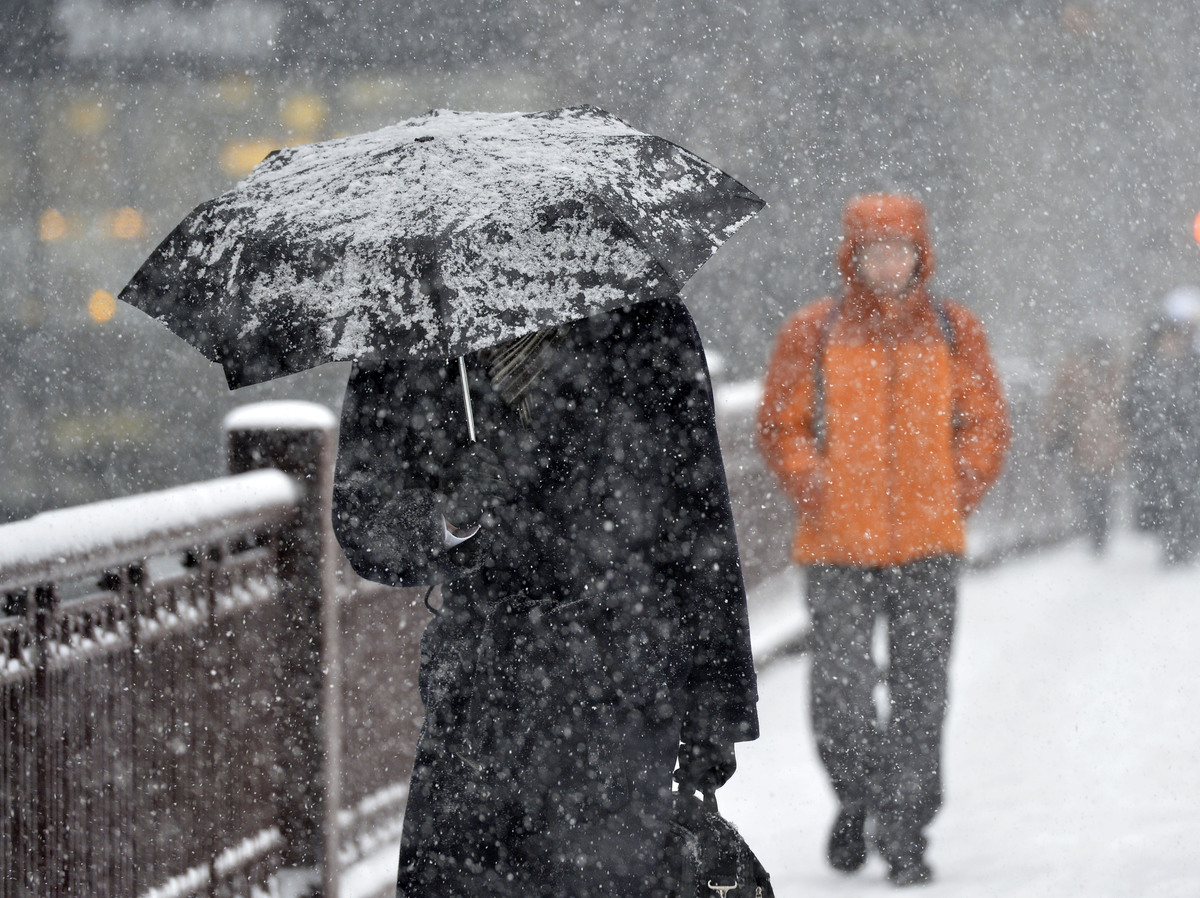 Pedestrian on the street in Chicago on Tuesday

The winter storm that has dumped several inches of snow from the Dakotas to Maryland is expected to linger over the mid-Atlantic on Wednesday, bringing another 5 to 9 inches to many areas in the east.

Federal government offices in the nation's capital were closed Wednesday in anticipation of the wet, heavy snow, and many schools were closed in Washington, D.C., and Baltimore. Hundreds of flights were canceled at Dulles and Reagan National airports.

"Just about ready to declare a BUST for #DC. Western burbs continue to get it. #Saturn #snowquester"

Meanwhile, The Washington Post's Capital Weather Gang reports that "Substantial snow accumulations, thus far, have mainly occurred west and southwest of the Beltway, and it's those areas likely to reach forecast snow totals of 7-14 inces. In the city and east of town, due to the rain mix, snow amounts will likely fall short of forecasts for 5-10 inches."

Although the "sloppy mess" in D.C. has been less than originally predicted, National Weather Service spokesman Chris Vaccaro says worse weather could still come Wednesday afternoon as the air cools and the snow grows heavier. Vaccaro says it will be gloppy and "consistent with wallpaper paste."

The system has already left up to 10 inches of snow in the Chicago area and is expected to bring between 3 and 7 inches to the D.C. area and up to 16 inches in western Maryland. A foot of snow was expected in parts of Virginia, with up to 21 inches forecast for higher elevations.

Virginia Gov. Bob McDonnell has declared a state of emergency for the state.

Speaking during an early afternoon conference call, he said about one-fourth of the state had been severely affected by the storm and that some areas had gotten "well over a foot." He said an estimated 196,000 homes were without power.

McDonnell said his state could expect a lot more heavy, wet snow in the next 12 hours or so.

The Associated Press reports that Dominion Virginia Power has alerted out-of-state utilities that it might require assistance.

Delaware and the Jersey shore were both bracing for possible flooding.

By early Wednesday, wet snow was falling in the Washington area. It was accumulating on the grass in some areas, but not on the streets as temperatures hovered above freezing. The worst of the storm was expected to arrive by midday.

Schools were closed in Minnesota, Wisconsin and Illinois, and more than 1,100 flights were canceled at Chicago's two major airports, prompting delays and closures at others.

As of midnight, 9.2 inches of snow was measured at O'Hare International Airport, bringing the Chicago area to a total of 29.5 inches for the season, a bit less than the average snowfall season-to-date total of 30.5 inches. National Weather Service meteorologist Jim Allsopp said Tuesday's storm through midnight would bring the area close to season averages after a relatively snowless start to winter.

The Chicago area has seen more than 10 inches of snow in a single day just 21 times since 1886.

"This is certainly the heaviest snow we've had this year," weather service meteorologist Andrew Krein said. "It's a fairly uncommon event to get more than 6 inches of snow in the Chicago area."

The AP had no initial reports of major accidents in the Chicago area but reported that a semitrailer slid off a snow-covered interstate in western Wisconsin, killing one person.