Accessibility links
A Chat With A Radical Fighter In Syria : The Two-Way Islamist fighters have been playing a larger role in the Syrian conflict, and the most prominent single group is Jabhat al-Nusra. One of its fighters sat down with NPR and spoke about the group. 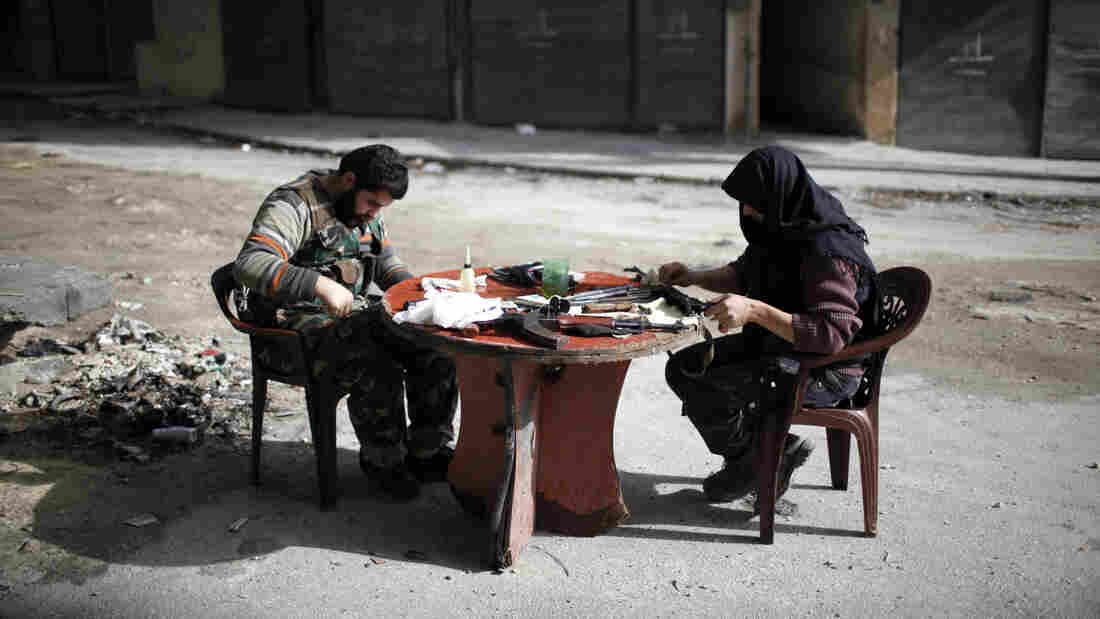 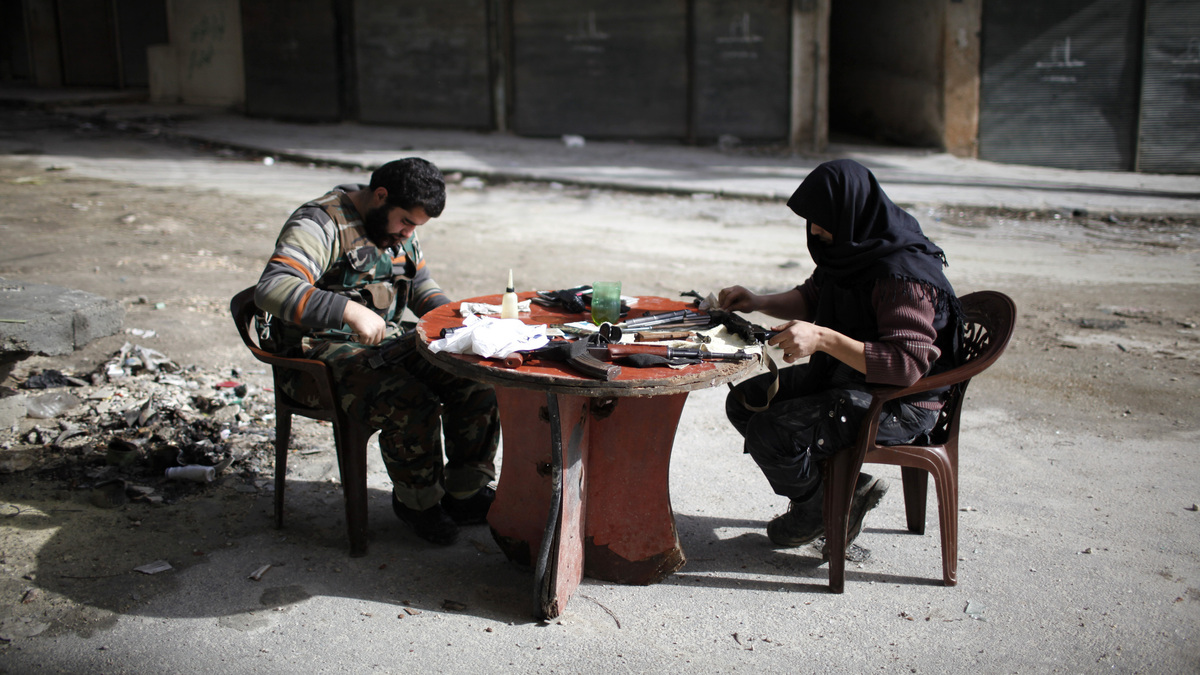 Members of Jabhat al-Nusra clean their weapons, in Aleppo in December. The Islamist rebel group has become an increasingly powerful force in Syria's civil war.

The Islamist rebel group Jabhat al-Nusra has been secretive, keeping to itself and refusing to meet Western journalists. The group has been designated a terrorist organization by the Obama administration and was thought to be made up mostly of foreign fighters, working alongside Syrian rebels.

But lately, members are starting to open up as more Syrians join the group and they make more gains on the ground in the fight against the Syrian government.

In the northwest Syrian town of Kafr Nabel we met a 21-year-old fighter from the group. He said he came from Libya six months ago and goes by the name Brother Huthaifa. He says he is a "sheikh," or leader.

He agreed to meet on the condition that he could "invite us to Islam," though he refused to have his photo taken. 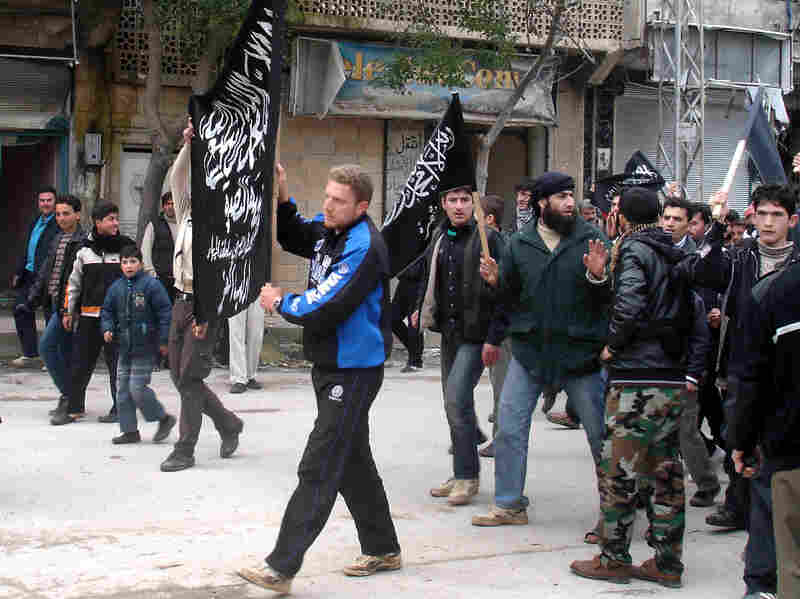 Islamists from Jabhat al-Nusra stage a protest in the Syrian town of Kfar Nabel. Until recently, the group has been reluctant to appear in public. Caroline Neil/NPR hide caption 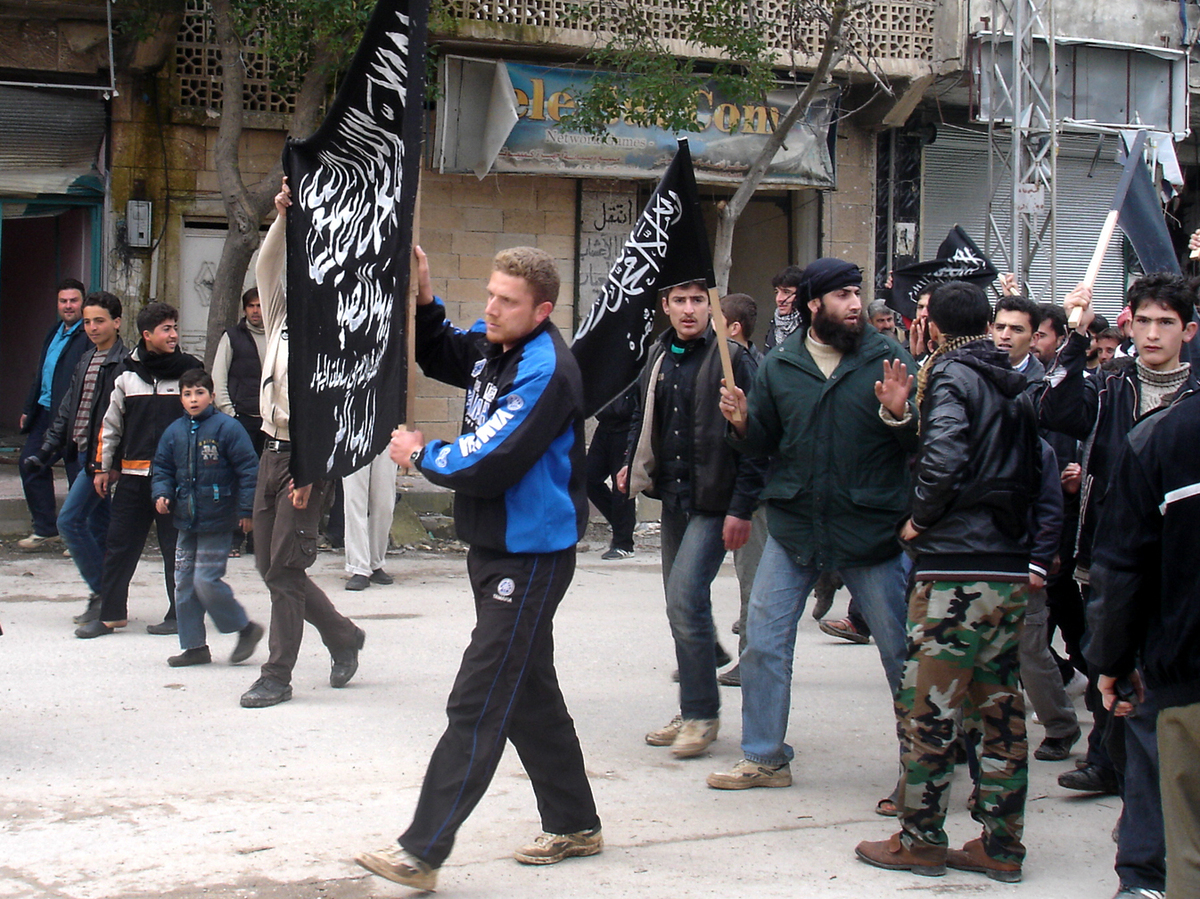 Islamists from Jabhat al-Nusra stage a protest in the Syrian town of Kfar Nabel. Until recently, the group has been reluctant to appear in public.

Here are highlights of the conversation:

On labeling the group

Brother Huthaifa: I object to anyone calling us extremists.

NPR: So what word would you use?

NPR: What is your vision for Syria?

BH: We Muslims have a certainty, there is talk of the prophet who preached that the best place on earth is the Levant. He also said that God chooses whom he wishes to be his best followers to be from here. I hope God chooses me and this is why I came to here, too.

NPR: What did you do before you came to Syria?

BH: I was a teacher of Quran and a sharia [Islamic law] student, fourth year in Benghazi, Libya. [During the uprising against Moammar Gadhafi], I was fighting in Sirte.

NPR: What is the goal of Jabhat al-Nusra in Syria?

BH: There are orders from the general command of the group that it is not allowed to conduct suicide operations inside residential neighborhoods.

On the group's attitude toward women

NPR: Will women be required to wear hijab [if the current regime is ousted]?

BH: Let me explain it this way. If I gave someone two lollipops ... one is covered and the other is not. Where will the germs and the bacteria go? To the uncovered one. And the same with the woman; if she is uncovered, the rotten one, who will the men chase? While if the woman is covered, even the most beautiful one, they will not chase her.

NPR: That brings us to the wider question of an Islamic state, and what does that mean for the non-Muslims?

NPR: You are also in a way not respecting the minds of men. You immediately think that they will chase a woman who is unveiled.

BH: Prevention is the best treatment. Men mostly look at face and the body. Then he will be following women and Satan will be whispering into his ears.

NPR: So why don't you put on a veil, too? There are women who chase men?

BH: Are you really asking to get an answer or to argue?

NPR: To get an answer.

On why the group is becoming more public

BH: There are no guidelines regarding this matter. Because people want to come to Jabhat al-Nusra on their own. If you want to know about us, you can follow us on Twitter.

NPR: But today you were a bit upset that the media didn't publicize your demonstration.

BH: The problem is that the media has lost its credibility. The media's role is to convey what is happening on the ground without exaggeration. And it isn't the case. It's opposite. Especially when Jabhat al-Nusra was classified as a terrorist organization. It did not commit any terrorist acts outside Syria, and it doesn't have any links to al-Qaida, but it was classified as a terrorist organization. Why? Because it resisted [Syrian president] Bashar al Assad.

NPR: In Syria, people have different beliefs than you. So the question is, how can you come from a different country and tell Syrians how to live their lives as Muslims?

BH: In our religion, the believers are brothers and sisters. ... There is no such thing as Libyan, Syrian, Tunisian. We are all Muslims.

BH: We believe in the prophecy of implementing an Islamic state.

NPR: So once there is an Islamic state, there will be the cutting off the hands of thieves and the death penalty [for worse crimes]?

BH: I decline to answer.

NPR: The people of Syria deserve an answer.

BH: Al-Hudud [the Islamic punishments for serious crimes] cannot be implemented except in a Muslim country with power and force. With cutting off hands, we would have to implement the several conditions necessary for an Islamic state before we could do that.

NPR: We saw how your organization helped with bread distribution in Aleppo. Is it an important phase for you right now to earn the trust of the people?

BH: Yes, Sheikh Abu Mohammad al-Joulani, who is the emir of Jabhat al-Nusra in Syria, wrote a letter titled, "People of Sham we sacrifice our souls for you." In it he said that Jabhat al-Nusa is not a political organization but a group that cares in the matters of all Muslims.