Accessibility links
The Smoke Is Black: No Pope After Cardinals' First Vote : The Two-Way In the Sistine Chapel, cardinals have begun voting. It takes the votes of two-thirds (77 cardinals) to become pope. In between the votes, the cardinals will be "busy murmuring in each others' ears over coffee and pasta" as they form alliances, NPR's Sylvia Poggioli says.

The Smoke Is Black: No Pope After Cardinals' First Vote

The Smoke Is Black: No Pope After Cardinals' First Vote 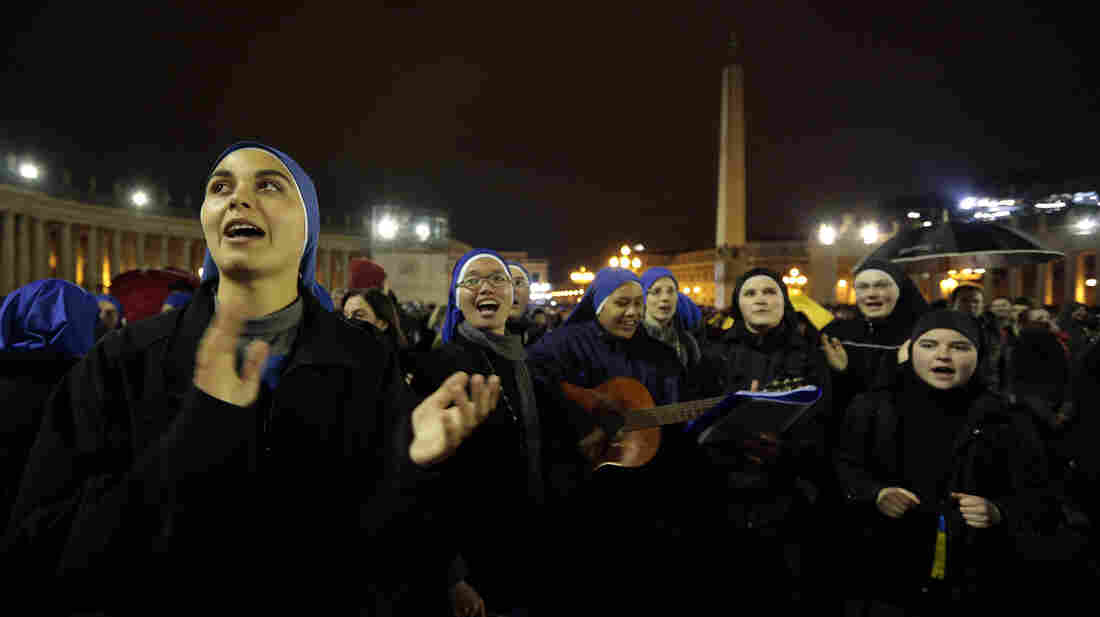 As the black smoke rose from the Vatican chimney Tuesday, some of the nuns and others gathered in St. Peter's Square were singing. Eric Gaillard /Reuters /Landov hide caption 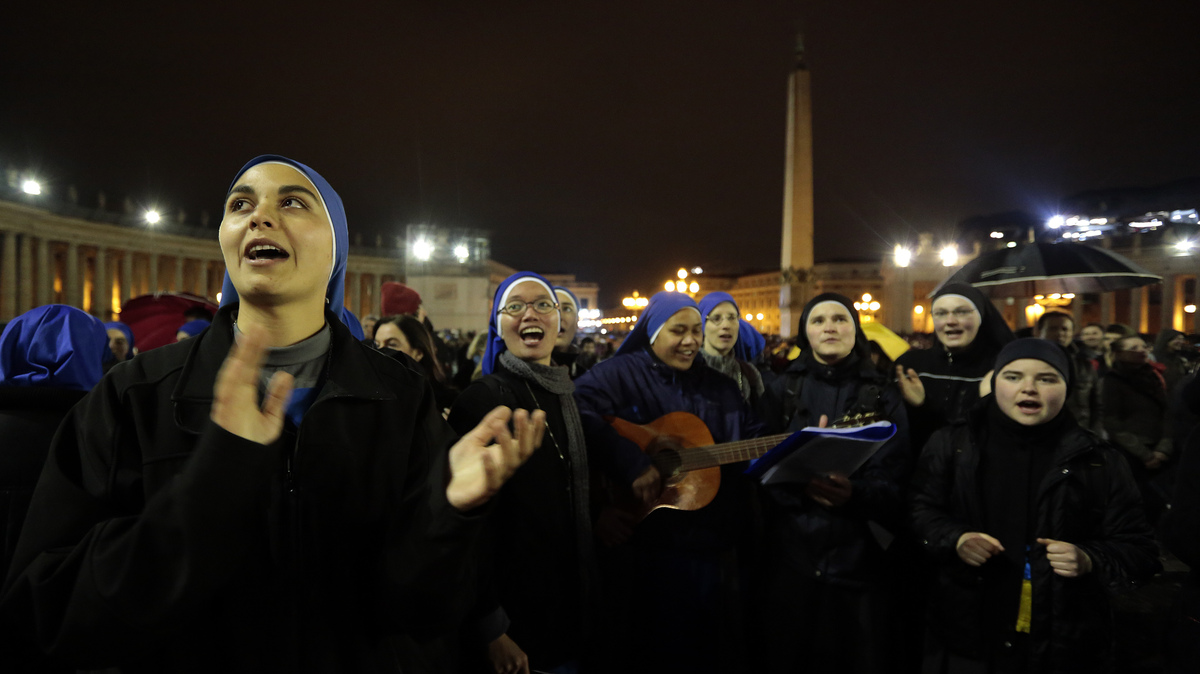 As the black smoke rose from the Vatican chimney Tuesday, some of the nuns and others gathered in St. Peter's Square were singing.

Black smoke just poured from the chimney above the Vatican. That means, as was expected, the cardinals did not choose a pope on the first vote of their conclave to name a successor to the now-retired Pope Benedict XVI. As the cardinals' ballots are burned, NPR's Sylvia Poggioli says, chemicals are added to a fire in a second stove to turn the smoke black if there's no pope elected and white if there is.

Now, if all goes as planned, the cardinals will vote again Wednesday. The next time to watch for smoke is 7 a.m. ET tomorrow. We'll keep an eye on what happens.

All those who can't vote for the next pope have been dismissed from the Sistine Chapel. So now, the 115 cardinals who are eligible begin their work.

Update at 11:30 a.m. ET. The Cardinals Are Entering The Sistine Chapel:

Our original post — "Watch For The White Smoke: Cardinals Begin Conclave To Select Next Pope" — continues:

After a mass at which they were urged to find a good shepherd for their church, 115 Roman Catholic cardinals are now prepared to begin the formal process of selecting the next pope.

If all goes as planned, the princes of the church (who NPR's Philip Reeves profiled on Morning Edition), will vote once Tuesday afternoon during their conclave in the Sistine Chapel. It's not expected that one candidate from their ranks will receive the two-thirds necessary (77 votes) to become pope. So it's likely that Tuesday evening in Rome (mid-afternoon along the East Coast of the U.S.) we'll see black smoke coming from a special chimney atop the Vatican — black is the signal that there's been a vote, but no decision; white smoke and bells chiming signal that a pope has been chosen.

As Phil explained Monday, in coming days the cardinals are expected to vote twice each morning and twice each afternoon until someone gets the two-thirds or more votes.

The conventional wisdom is that it may take several days for the cardinals to reach a decision. On Morning Edition today, NPR's Sylvia Poggioli said that while the cardinals won't be talking among each other and looking to build alliances while in the Sistine Chapel, they will almost surely "be busy murmuring in each others' ears over coffee and pasta" when they take breaks.

That murmuring "could be the key to creating new alliances" that lead to the selection of a pope, Sylvia added.

As for which cardinals are being most talked about as potential popes, Sylvia says they continue to include Italian Cardinal Angelo Scola, 71, and Cardinal Odilo Pedro Scherer, 63, of Brazil.

We'll be watching for news from Vatican City and will update as it comes.

There are, of course, many other stories about the conclave today and many other ways to monitor what's happening:

-- The Whispers in the Loggia blog continues its coverage.

-- The BBC rounds up the news so far today here, and writes that the homily the cardinals heard today "was more measured in tone than the address given in 2005 by Cardinal Joseph Ratzinger before he became Pope Benedict, which featured a fiery attack on the 'dictatorship of relativism.' "

-- And as you'd expect, there's a Pope app, as well as many other apps tracking what's happening.

If you want a refresher on Benedict's decision to retire, our previous posts are collected here.