Accessibility links
In Secular Syria, Top Muslim Cleric Picks Sides In Civil War : The Two-Way President Bashar Assad's government has repeatedly blamed religious extremists for the uprising. Now, the most prominent Muslim cleric says it is the religious duty of Syrians to fight in support of the government. 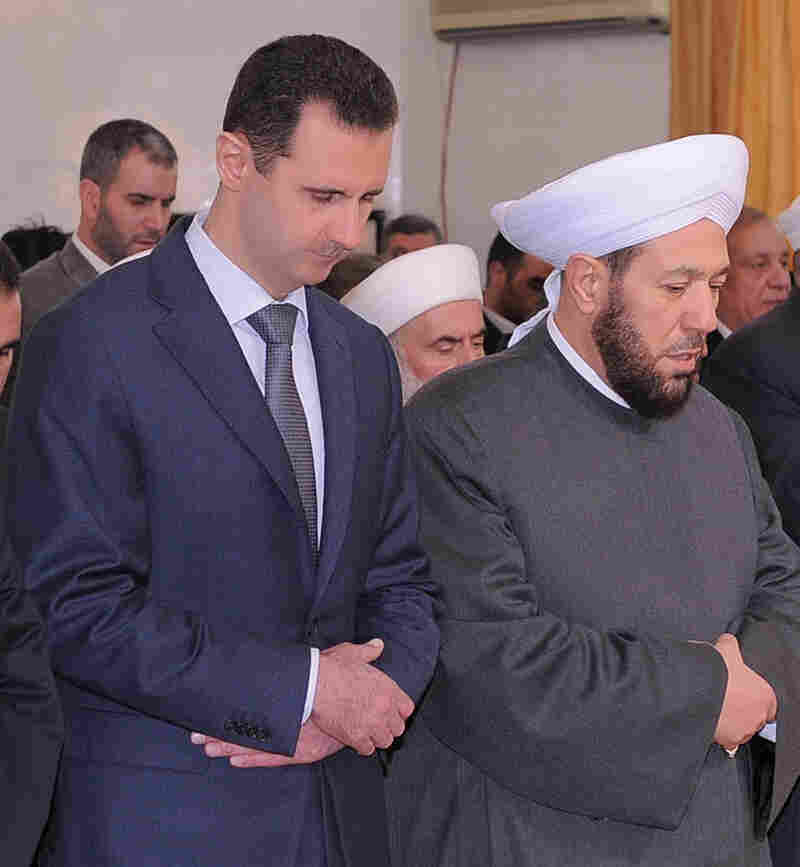 Syria's Grand Mufti Ahmad Hassoun (right) prays with President Bashar Assad in Damascus on Feb. 5, 2012. The grand mufti has called on Syrians to join the army and fight for the government, his most partisan statement since the country's uprising began two years ago. Anonymous/AP hide caption 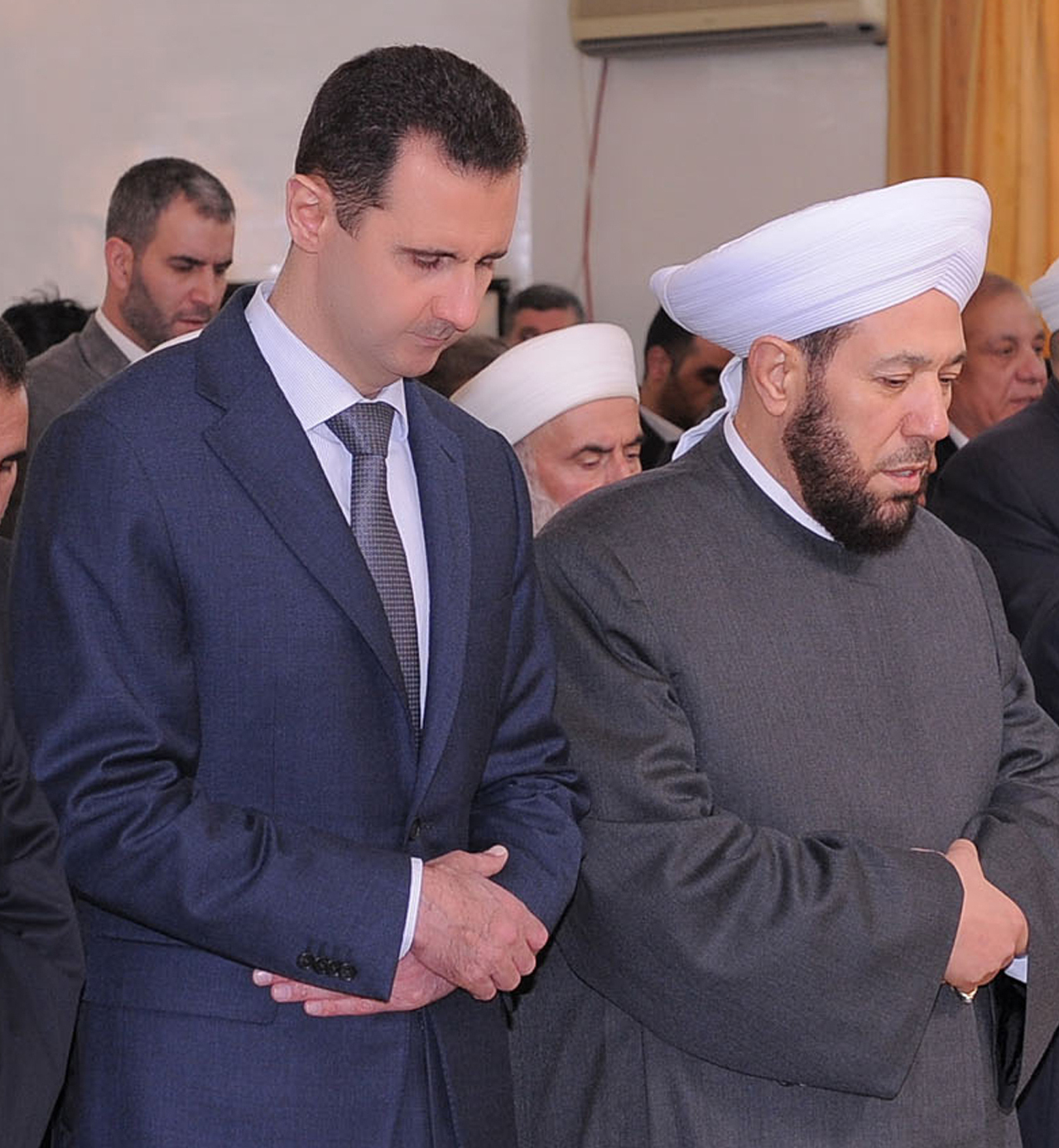 Syria's Grand Mufti Ahmad Hassoun (right) prays with President Bashar Assad in Damascus on Feb. 5, 2012. The grand mufti has called on Syrians to join the army and fight for the government, his most partisan statement since the country's uprising began two years ago.

This story was written by a Syrian citizen in Damascus who is not being further identified out of safety concerns.

In a surprising religious decree, Syria's government-appointed grand mufti has issued a fatwa calling on Muslims to fight on the side of President Bashar Assad's regime against the rebels who have been waging an uprising for two years.

In a televised statement Sunday, Syria's Grand Mufti Ahmad Hassoun said: "I urge the sons of Syria to join the army and fight for the unity of this great country."

He called on parents to push their children "toward this duty, and do not worry, for they will not be killed, only rewarded by God."

He said this was a duty for all Muslims.

The move was met with outrage by some clergymen in the Arab world, and by a barrage of sardonic humor on social media. One mufti, based in Saudi Arabia, condemned Hassoun for inciting violence and called him a "mufti of wickedness."

Such a fatwa is considered highly unusual, though not unprecedented. There have been times over the years when Syria's grand mufti has sanctioned jihad, or holy war, in places like Iraq and elsewhere.

Hassoun, who has served as grand mufti since 2005, has always been seen as a strong supporter of Assad. However, Hassoun has not spoken out previously in such a strong partisan manner.

Hassoun is a member of the Sunni Muslim majority in Syria, though there are a number of religious minorities and he has a reputation for encouraging interfaith dialogue. Assad belongs to the Alawites, an offshoot of Shiite Islam.

Hassoun's decree struck many Syrians as very strange because Assad's government has long dismissed the uprising as the work of jihadis. The regime has often claimed that extremists from abroad have been inciting violence within Syria.

In addition, the Assad regime has long championed itself as secular. The Baath Party, to which Assad belongs, has ruled Syria for over 40 years, sometimes acting in ways that were hostile to religiosity.

In the 1980s, men who had long beards to show their piety were often detained and sometimes disappeared, while Muslim schoolgirls were not permitted to wear a headscarf, or a hijab, in the classroom.

On Syrian state TV, anchorwomen appear in secular dress and show their hair. Only rarely are women shown wearing a hijab. State-sponsored Syrian television dramas, which have become very popular in the Arab world in recent years, follow the same approach: Actresses wearing the hijab are scarce.

Given the staunchly secular nature of the state, many Syrians were puzzled when the anchorman who introduced Hassoun first read the fatwa from the teleprompter, complete with verses from the Quran.

Fatwas are religious edicts issued by senior clerics. For that reason, it sounded extremely awkward for an anchor on secular state TV to be reading it.

One elderly Damascene watching the newscast while eating dinner stopped in midbite.

"What? Is he reciting the Quran?" she said, her face visibly confused.
"It's like the Soviet Union suddenly invoked Jesus."

On social media, one user referred to Hassoun as "Shaytoun," a diminutive play on words to mean the devil.

Another user circulated a picture of an uber-muscular man, a sort of stereotype of a pro-regime thug — but with a beard and a turban that had been Photoshopped.

In Ancient Aleppo, Plotting The Future

Pro-regime militiamen, known as the shabiha, have a reputation for cruelty. Multiple videos have surfaced showing them abusing captured rebels, especially bearded and religious ones. In some instances, the shabiha tell the rebels, "Only Bashar is your God."

"OMG. Bashar declares jihad on jihadis. How stupid is this regime?" said another.

The larger Arab media also went into overdrive in reaction to Hassoun's fatwa. One report, aired on the Dubai-based Al Arabiya, showed a compilation of clips of Hassoun saying contradictory things in the past.

One clip was taken at the start of the Egyptian revolution in early 2011, but just before the start of the Syrian uprising in March of that year. Hassoun says it is unethical for clergymen to take sides in these popular movements.

"It's not our role to incite violence between people, but rather to promote harmony in society," he said.

"For us to go on TV to tell people 'kill your leader,' or tell the leader to 'kill your people,' that is not our right," he added. "We only say to the leader: 'God help you. Be just with your people.' "