Accessibility links
Justice's Voting Rights Unit Suffers 'Deep Ideological Polarization' Says Watchdog : The Two-Way An inspector general investigation exposed deep fissures within the unit for the past dozen years and gave rise to perceptions of politicized and partial behavior by lawyers there. 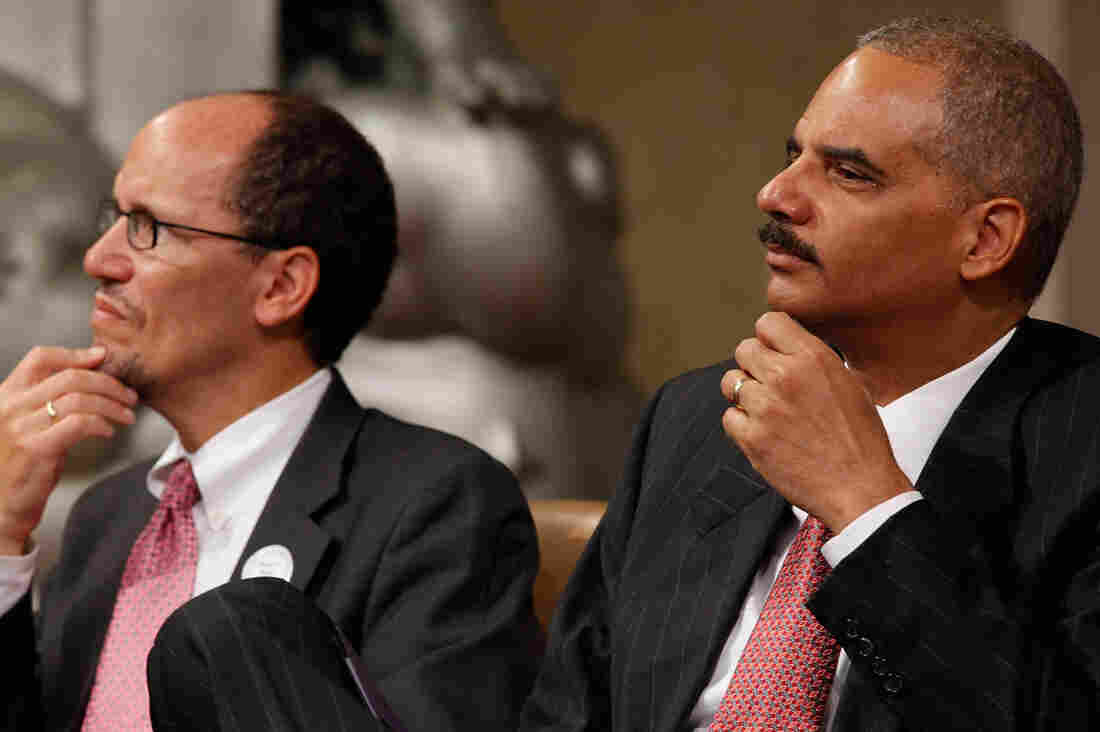 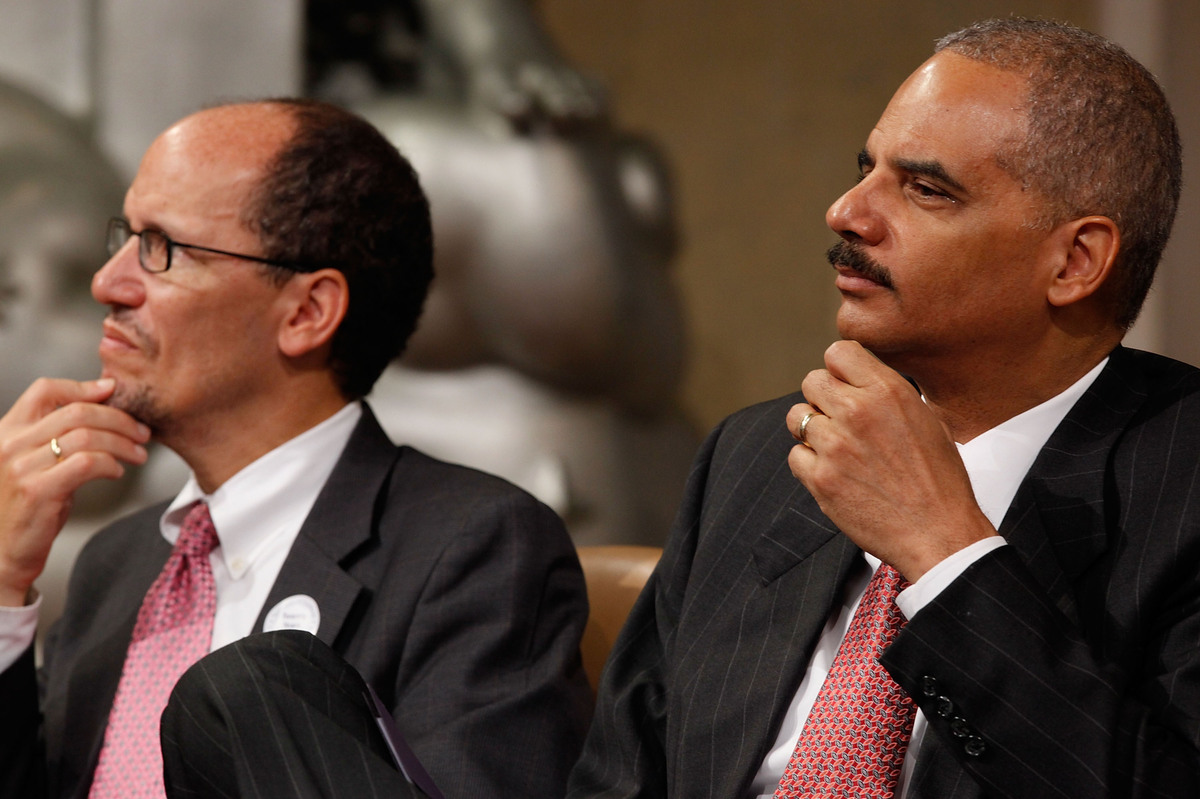 The Justice Department's voting rights unit suffers from "deep ideological polarization" and a "disappointing lack of professionalism" including leaks of sensitive case information, harassment and mistreatment among colleagues who have political differences, department watchdogs concluded Tuesday.

Inspector General Michael Horowitz said he found "insufficient" evidence to support the most damaging claims Congressmen asked him to investigate: that leaders in the Bush and Obama administrations refused to enforce voting laws on behalf of a particular group of voters, favoring African Americans or whites, or that they had made decisions about cases "in a discriminatory manner."

But the review of more than 100,000 documents and 135 witnesses, including Attorney General Eric Holder, exposed deep fissures within the unit for the past dozen years that gave rise to perceptions of politicized and partial behavior by lawyers there. Horowitz said he would share his 258-page report with the Deputy Attorney General, who has the power to refer employees for further investigation and possible discipline.

By far, the inspector general said, the most "troubling" incidents in the report describe harassment within the voting rights unit, which spanned both the Bush and the Obama administrations. In 2005, during a sensitive review of Georgia's voter identification law, lawyers there turned on each other.

The report said one team member described a colleague as a "hand-picked Vichyite," comparing the voting section to Vichy-controlled France during the Nazi occupation, and another team member accessed the colleague's document directory and shared a memo without permission.

The following year, when the Bush Justice Department brought a controversial "reverse discrimination" case against black defendants who allegedly abridged white voters' rights, some career staff members harassed an African American intern who volunteered to travel to Mississippi to work on the trial as a "token." The intern told investigators the treatment angered and insulted him.

The inspector general report said people in the office at the time also made a series of anonymous Internet postings "on widely read liberal web sites." Those postings sometimes included racist commentary and described one apparently Republican lawyer in the unit as living in a neighborhood where "everyone wears a white sheet." The report said the other remarks ranged from "petty and juvenile personal attacks to highly offensive and threatening statements." Others retaliated, the report said, by leaking sensitive case material to lawyers and interest groups outside the Justice Department who shared their political views.

But watchdogs also criticized the treatment of section chief Christopher Coates, after the Obama administration had taken over at the Justice Department. New leaders in the civil rights unit raised concerns about his performance and his willingness to follow their enforcement priorities, with some deeming him "hostile" to traditional cases protecting minority voters. The Inspector General said Coates had previously received "outstanding" performance marks and a cash bonus for his work there during the last year of the Bush administration.

New, Democratic department leaders met with Attorney General Holder in April 2009 to discuss their concerns about Coates, the report said. They later explored ways to remove Coates but were told department regulations would not allow it for at least six months. For the next several months, the report said, a "Sensitive Working Group" reviewing voting rights issues excluded Coates from meetings. One lawyer there described the projects as "cloak and dagger." Coates reached out to Assistant Attorney General Thomas Perez after he was confirmed by the Senate in October 2009, and requested a transfer to Charleston, South Carolina, where he finished the final 18 months of his career before retiring.

The IG report emerged as the work of the voting rights section occupies a prominent spot on the national stage. The U.S. Supreme Court is considering a constitutional challenge to the 1965 Voting Rights Act. Just last year, states including Arizona, South Carolina and Texas squared off in court against the U.S. Justice Department over whether new legislative boundaries and voter I.D. laws discriminated against minorities.

"It is precisely because of the political sensitivity of the Voting Section's cases that it is essential that division leaders and...managers be particularly vigilant to ensure that enforcement decisions – and the processes used to arrive at them — are, and appear to be, based solely on the merits and free from improper partisan and racial considerations," Horowitz concluded.

Perez, who is in charge of civil rights, responded that he's taken steps to improve "the atmosphere and professional culture" within the unit. Perez said most of the staff mistreatment took place between 2004 and 2007, during the Bush administration, and that he'd named a new leader for the unit two years ago. But Perez wrote the Inspector General that he'd do more moving forward to foster a collegial work environment and to crack down on politically motivated leaks about voting rights cases.

Perez has recently captured his own headlines as a top candidate to become President Obama's new Secretary of Labor. The new inspector general report said Perez was not personally involved in one of the most contentious incidents – involving a decision to drop charges against a defendant affiliated with the New Black Panther Party for allegedly intimidating Philadelphia voters on Election Day 2008. But the report criticizes Perez for testimony before the U.S. Civil Rights Commission "that did not reflect the entire story," with watchdogs concluding that Perez should have asked his colleagues for more details about the episode. Perez testified the department's political leadership was not "involved" in deliberations about the case and its handling but emails and other materials indicate two political appointees gave advice and one performed edits. Perez told watchdogs in an interview that he didn't think that meant "involvement".

Inspector General Horowitz said many of the employees mentioned in the report had since left the Justice Department, shielding them from disciplinary action. But he urged the Attorney General and his deputy to try to address the culture within the unit, which he said had sometimes hurt its ability to function.

Lawmakers are already weighing in with their thoughts. Virginia Republican Rep. Frank Wolf, who helped initiate the review, said the unit had become a "rat's nest of unacceptable and unprofessional actions, and even outright threats." Wolf said the Attorney General bears responsibility for the problems and he called on Holder to appoint an outside panel to look at the "systematic dysfunction" in the unit. The Inspector General is scheduled to testify before Wolf's House Appropriations panel Thursday.