Accessibility links
Who Is Pope Francis? : The Two-Way The new pope is known for his appeal to the common man, but appears to hold many of the same conservative views as his predecessor.

Who Is Pope Francis?

Who Is Pope Francis? 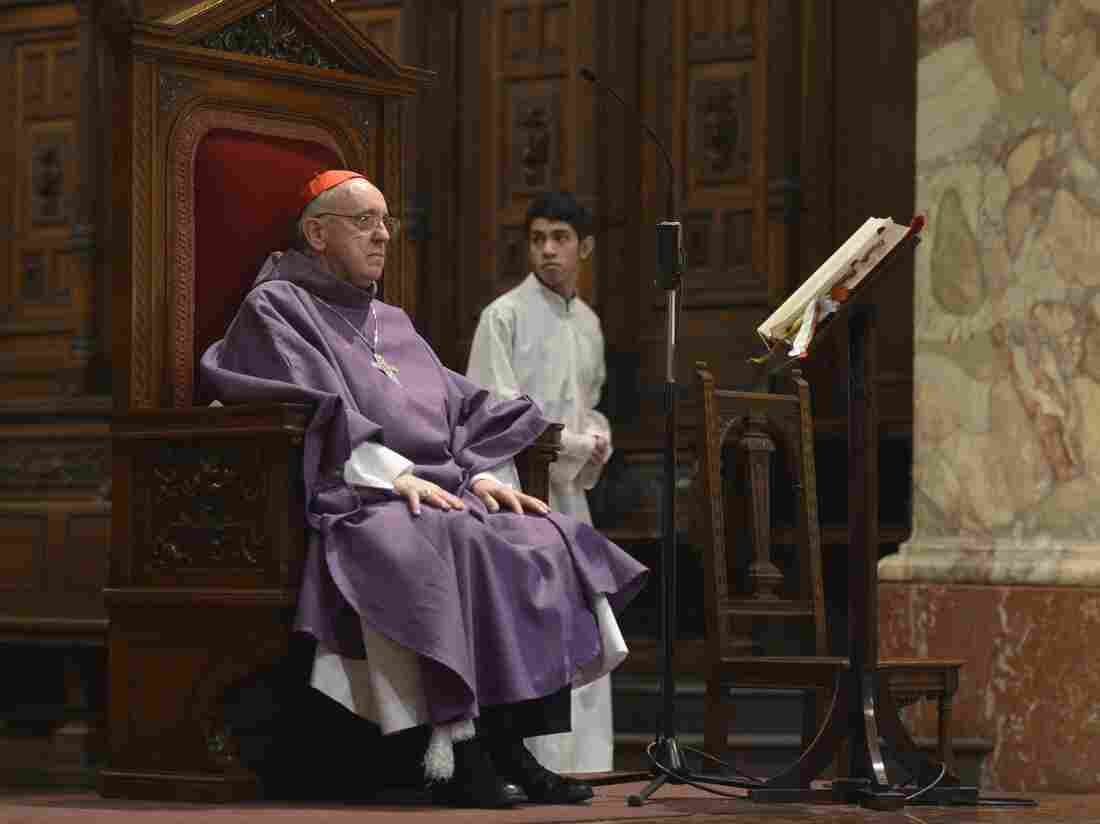 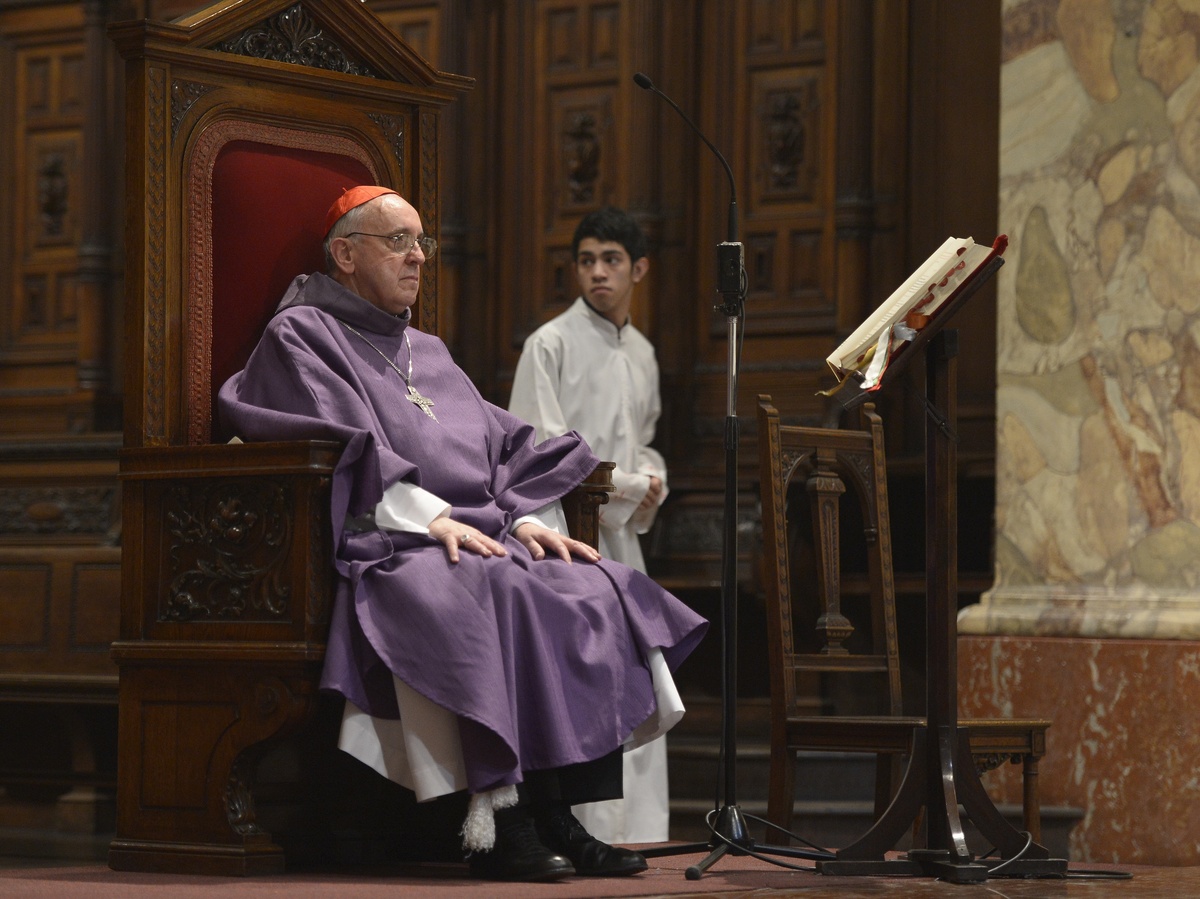 Argentine Archbishop Jorge Bergoglio during a mass for Ash Wednesday, opening Lent on February 13, 2013 at the Metropolitan Cathedral in Buenos Aires, Argentina.

The new pope, 76-year-old Jorge Bergoglio, the archbishop of Buenos Aires, is the first pontiff from Latin America and the first Jesuit, but he appears to hold views very much in line with his predecessor, Pope Benedict XVI.

Bergoglio has chosen the papal name Francis, becoming the 266th to hold the title of spiritual leader of the Catholic Church.

Catholic News Service calls him an accomplished theologian and says Bergoglio has "written books on spirituality and meditation and has been outspoken against abortion and same-sex marriages."

He was born Dec. 17, 1936, in Buenos Aires to Italian parents Mario, a railway worker, and Regina, a housewife, reports Argentina's La Nacion.

The newspaper says that when Bergoglio traveled to Rome, he kept a low profile and didn't like to reveal that he was a cardinal.

"That's why he is frequently seen wearing a black overcoat. Also, when he was declared a cardinal, he decided not to buy new clothing. Instead, he ordered the clothing of the previous cardinal be mended to fit him," the newspaper says.

Francesca Ambrogetti, who co-authored a biography on Bergoglio, was quoted by Reuters describing the cardinal as a moderate who is media shy and deeply concerned about social inequities in Latin America and elsewhere.

"He would be a balancing force," Ambrogetti told the news agency. "He shares the view that the Church should have a missionary role, that gets out to meet people, that is active.... a church that does not so much regulate the faith as promote and facilitate it."

Whispers In The Loggia, a well-respected blog that follows Vatican affairs, says:

"By choosing the name [Francis] of the founder of his community's traditional rivals, the 266th Roman pontiff ... [he] has signaled three things: his desire to be a force of unity in a polarized fold, a heart for the poor, and his intent to 'repair God's house, which has fallen into ruin' ... that is, to rebuild the church."

Thomas X. Noble, a professor of history at Notre Dame University, says the choice of the papal name evokes St. Francis of Assisi, who preached in the streets as a pauper, could signal that the new pontiff seeks to be a populist pope as well as St. Francis Xavier, one of the 16th century founders of the Jesuit order.

The Rev. James Martin, a Jesuit priest who is editor of America magazine, a Catholic weekly, says Bergoglio is "a holy and prayerful man, devoted to the poor and a strong defender of church teaching."

"Remember that as a Jesuit he takes vows of poverty, chastity and obedience, and he will surely be a strong defender of the poor," Martin says.

"He's very much a boots on the ground kind of man," says Donna Bethell, chairwoman of Christendom College in Front Royal, Va. "I think he's going to be a very strong voice for the Church."

Harvey Cox, a professor at Harvard Divinity School, says the choice of a South American cardinal is an acknowledgement that "the growing edge of the Catholic Church is no longer in Europe, it's in the Southern Hemisphere and the non-Western world."

In recent years, he says, Protestants, especially evangelicals, have been making significant inroads in South America, though less so in Argentina than in some other countries.

Cox calls the move a "quantum leap" for the Catholic Church, but speculates that while the conclave "wanted to move outside Western Europe at long last, they didn't want to pin themselves down to a third world pope for the long haul."

Catholic News Service says Bergoglio, who was archbishop of Buenos Aires until 2012, has a low-key style and is close to the people. He "has had a growing reputation as a very spiritual man with a talent for pastoral leadership serving in a region with the largest number of the world's Catholics."

"He rides the bus, visits the poor, lives in a simple apartment and cooks his own meals. To many in Buenos Aires, he is known simply as "Father Jorge."

He also has created new parishes, restructured the administrative offices, led pro-life initiatives and started new pastoral programs, such as a commission for divorcees. He co-presided over the 2001 Synod of Bishops and was elected to the synod council, so he is well-known to the world's bishops.
...
In 2010, when Argentina became the first Latin American country to legalize same-sex marriage, Cardinal Bergoglio encouraged clergy across the country to tell Catholics to protest against the legislation because, if enacted, it could "seriously injure the family," he said.

He also said adoption by same-sex couples would result in "depriving [children] of the human growth that God wanted them given by a father and a mother."

One of the big questions about Bergoglio is his stance on Liberation Theology, which advocates liberation from unjust economic, political or social conditions. Latin America was very much the epicenter of the movement.

The National Catholic Reporter has this on his views:

"He spent much of his early career teaching literature, psychology and philosophy, and early on he was seen as a rising star. From 1973 to 1979 he served as the Jesuit provincial in Argentina, then in 1980 became the rector of the seminary from which he had graduated.

"These were the years of the military junta in Argentina, when many priests, including leading Jesuits, were gravitating towards the progressive liberation theology movement. As the Jesuit provincial, Bergoglio insisted on a more traditional reading of Ignatian spirituality, mandating that Jesuits continue to staff parishes and act as chaplains rather than moving into "base communities" and political activism."