Accessibility links
'God Particle' Update: Scientists Think They've Pinned Down The Higgs Boson : The Two-Way Scientists have been searching for the elusive sub-atomic particle that gives everything mass. As more and more data come in from the Large Hadron Collider that straddles France and Switzerland, they think they've found it. 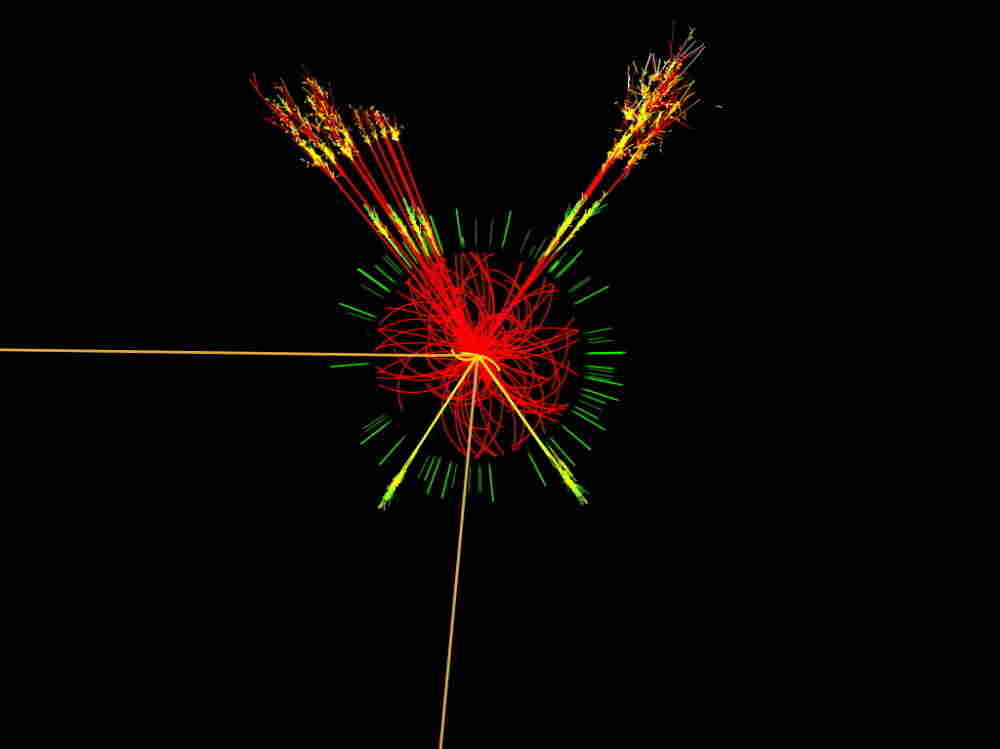 This is what researchers at the ATLAS detector at the Large Hadron Collider expect a Higgs boson to look like. The Higgs boson is the subatomic particle that scientists say gives everything in the universe mass. ATLAS Experiment/CERN hide caption 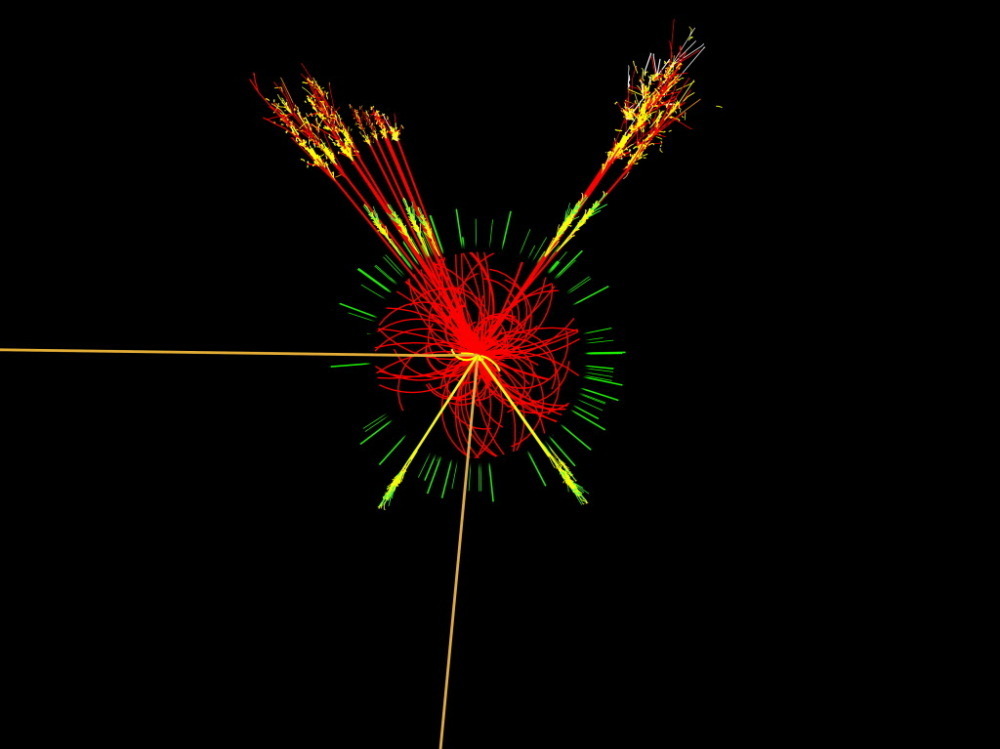 This is what researchers at the ATLAS detector at the Large Hadron Collider expect a Higgs boson to look like. The Higgs boson is the subatomic particle that scientists say gives everything in the universe mass.

"Scientists working with data from a large particle accelerator in Europe are now almost certain they have pinned down the elusive sub-atomic particle known as the Higgs Boson," NPR's Joe Palca tells our Newscast Desk.

Or, as it's also known, the "God Particle" (more on that moniker below).

"The Large Hadron Collider sits in a 17-mile long circular tunnel straddling France and Switzerland. There are two scientific instruments called detectors located at distinct points around the tunnel. These detectors measure the debris when larger atomic particles are smashed together. Now, scientists have analyzed results from both these detectors, and both have seen a particle consistent with what theoretical models have predicted would be the Higgs Boson.

"Although the result is gratifying in the sense that the collider was built largely to find the Higgs, finding it exactly as predicted is a little disappointing. Finding something that wasn't predicted would mean there's an entire new field of physics is waiting to be discovered."

OK, we realize this is complicated — and that as scientists do, the geniuses at the European Organization for Nuclear Research, or CERN, are leaving themselves some wiggle room. This is from their announcement Thursday:

"Having analysed two and a half times more data than was available for the discovery announcement in July, they find that the new particle is looking more and more like a Higgs boson, the particle linked to the mechanism that gives mass to elementary particles. It remains an open question, however, whether this is the Higgs boson of the Standard Model of particle physics, or possibly the lightest of several bosons predicted in some theories that go beyond the Standard Model. Finding the answer to this question will take time."

To help us all better understand this, let's look back to an exchange Eyder had last June with 13.7 blogger Adam Frank:

Q: I've heard many metaphors for what this Higgs boson is. A basic explanation is that it's the thing that gives subatomic particles their mass. The best metaphor I've heard is from Fermilab's Don Lincoln, who says the energy field made by the Higgs is like water. Depending on your mass you'll move through the water with ease — like a barracuda — or slowly, like a big, fat man. How would you explain the Higgs to a friend at a bar?

It's all about interactions. It's about them exchanging other particles as forces. With a particle like the electron — what gives the electron mass is really inertia, that's the property that we associate with massive particles. Mass and inertia go together.

So since an electron or a quark has no extension in space, you sort of wonder where did the mass go? Well it's not that the mass resides with the electron or the proton. It's that the mass comes from its interaction with other things. And in this case, it's the Higgs field that gives this point particle — the electron — the appearance of inertia. That is what allows it to act like it's resisting changes in its motion.

Whereas you have other particles like the photon which has no mass, and because of that it can go at the speed of light, whereas a massive particle will never be able to go at light speed.

Q: So, if the Higgs didn't exist, what would the world look like?

A: It would all be photons. Everything would be moving at the speed of light, right. Which means at light speed, you wouldn't be able to have the kinds of structures we see today. You'd never get atoms and chemistry and rocks. So it's really important. The property of mass is really important for getting clumpy structures, essentially, like us.

Now, about that "God particle" name. As another of 13.7's bloggers, Marcelo Gleiser, has written, it's a misnomer:

"The God Particle is the title of a popular science book by Nobel Prize winner Leon Lederman, who was Fermilab's director for many years and thus my boss when I was a postdoctoral fellow there. According to Leon, he wanted to call the book The Goddamn Particle because nobody could find the thing. However, his editor discouraged him from the title, suggesting that The God Particle would sell many more copies. This is the story that Leon tells us.

"In any case, the name stuck. Of course, the particle has nothing godlike about it. It's a hypothetical particle, part of the so-called Standard Model of particle physics. Its main job is to give masses to all other particles. I guess, in this role, it does have something of a centralizing influence, although nothing quite divine. Its real name, the Higgs boson, honors Scottish physicist Peter Higgs who, in the 1960s, worked on perfecting the details of the mass-giving mechanism."

-- The End Of The Universe, The Higgs And All The 'Ifs'

-- Dispatch From CERN: Which Higgs?