Accessibility links
NHL Realignment: New Divisions Drawn To Ease Time Zone Conflicts : The Two-Way The NHL will shuffle its teams before next season, moving from three divisions in both the Eastern and Western Conferences to a total of four divisions. The league's owners approved the plan Thursday; the players' association gave its OK last week. 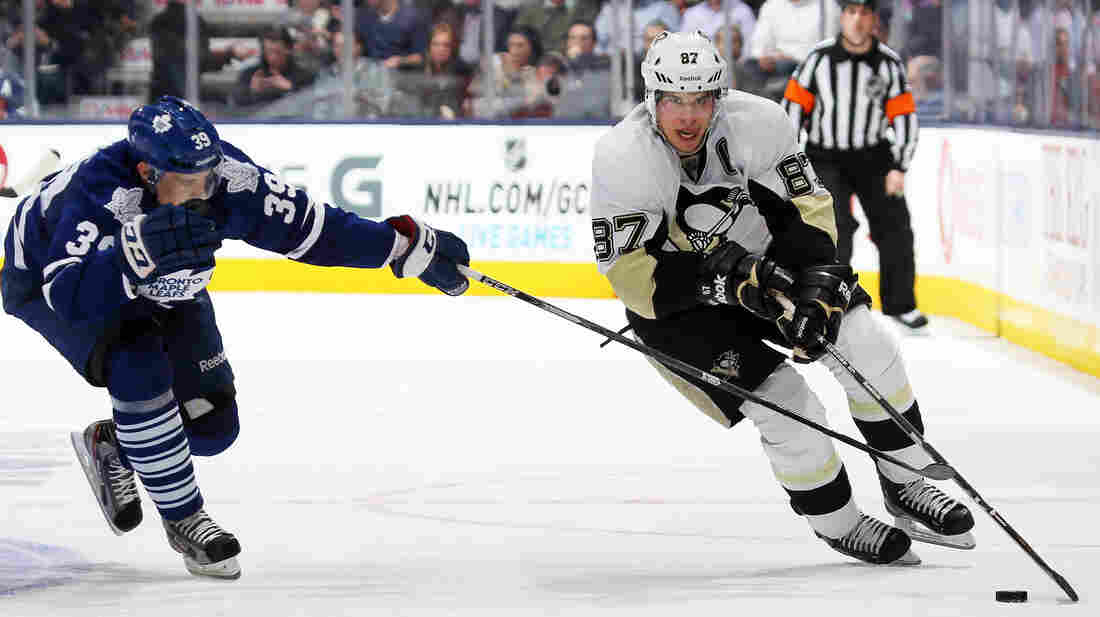 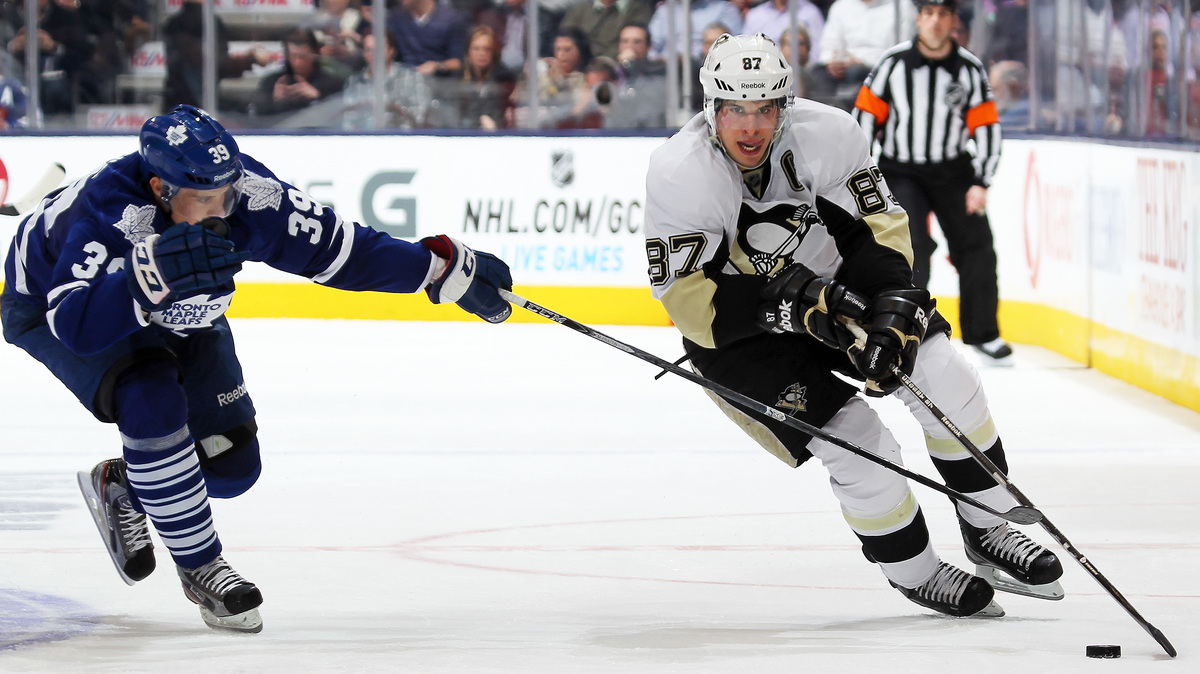 The NHL's new realignment, due to take effect next season, includes scheduling rules that should let more fans see league scoring leader Sidney Crosby, of the Pittsburgh Penguins, in person.

The NHL will shuffle its teams before next season, moving from three divisions in each conference to a total of four divisions in the Eastern and Western Conferences. The league's owners approved the plan Thursday; the players' association gave its OK last week.

The plan brings the biggest changes to the Detroit Red Wings and Columbus Blue Jackets, both of which will move to the Eastern Conference, and the Winnipeg Jets, which will head to the Western Conference. Those teams, and their fans, will now deal with fewer time zone conflicts during the regular season. And they're not alone.

"No one is a bigger beneficiary of this than the Dallas Stars," team president Jim Lites tells the CBC. "We've spent quite a bit of time competing two time zones away in the West, which is always difficult." 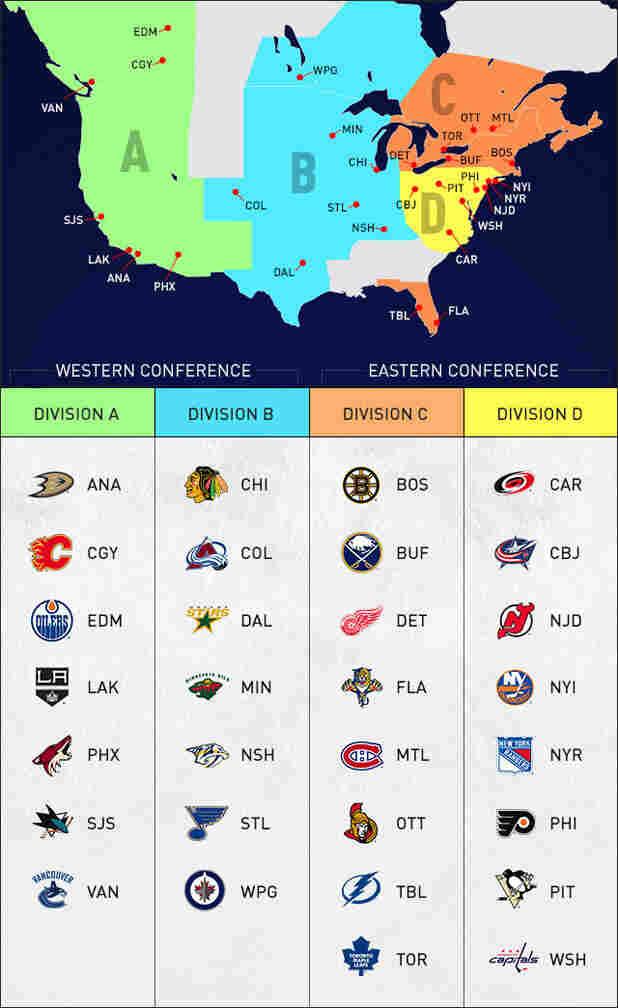 A chart depicts the NHL's new divisions, which will take effect when the new season begins later this year. The lineup puts 16 teams in the Eastern Conference, and 14 in the Western. NHL hide caption 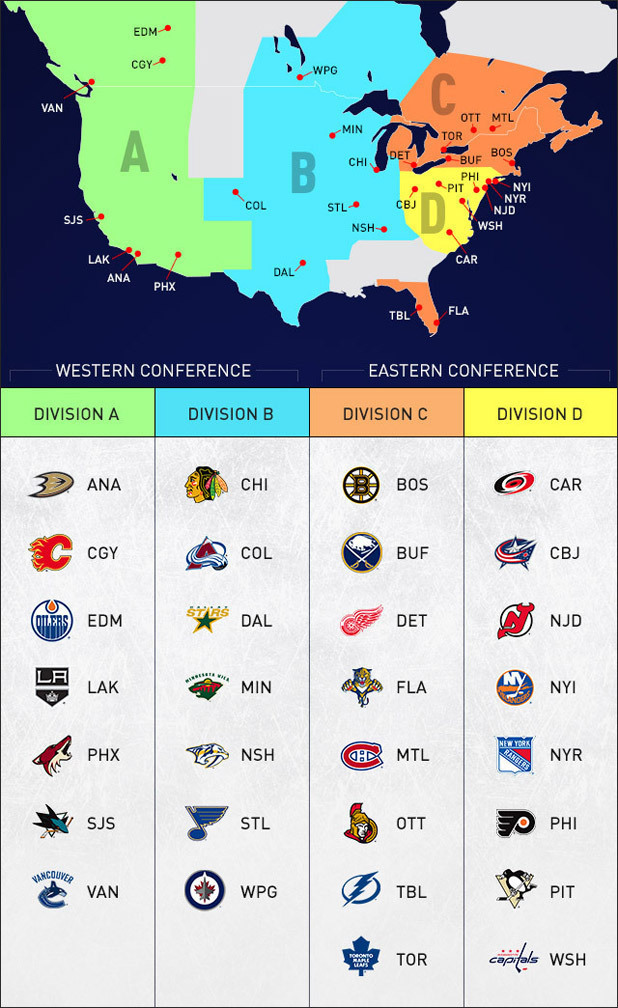 A chart depicts the NHL's new divisions, which will take effect when the new season begins later this year. The lineup puts 16 teams in the Eastern Conference, and 14 in the Western.

The new system also includes a scheduling directive that each NHL team will play in every arena at least once during the regular season — a move that should allow more fans to watch stars such as Pittsburgh Penguins captain Sidney Crosby, the current scoring leader.

That provision will also allow teams like Detroit, which is leaving longtime rivals that include the Chicago Blackhawks, to maintain a sense of tradition.

The case for realignment was strengthened, says NHL commissioner Gary Bettman, by the move of the Atlanta Thrashers team to Winnipeg. After that switch, the Jets remained in the Southeast division of the Eastern Conference, forcing teams to travel between Manitoba, Florida, North Carolina, and Washington, D.C., for division games.

"I think it's very exciting for us as an organization and for our fans to be geographically located where we ought to be," Winnipeg Jets chairman Mark Chipman tells the NHL website. "It looks like from a League perspective [realignment] solved a lot of issues, so we're very supportive of it."

The new divisions have not yet been named; for now, they are going by letters A,B,C, and D. A new post at SBNation lays out several naming options, including returning to the old "Patrick, Adams, Norris, Smythe" lineup.

The playoff picture will also change, thanks to a new wild-card system. With a total of 30 teams, the NHL opted to unbalance its two main units, putting 16 in the Eastern and 14 in the Western Conference.

"The top three teams in each division will make the playoffs and the final two spots in each conference will be filled by the next two highest-placed finishers," reports NHL.com, "based on regular-season points and regardless of division."